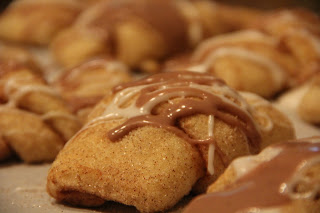 When we were on vacation two weeks ago in Denmark, my hubs went into this glorious bakery and bought cinnamon rolls with two types of icing on top…chocolate and vanilla.  Brilliant.  Why haven’t I always been putting both chocolate and vanilla icing on my cinnamon rolls????  Well, we came home and I tried to make my own version.  Since I have two toddlers running around, I don’t have time to make homemade cinnamon rolls, so I let the store help me out quite a bit.  So much simpler, so super yummy, and all the bells and whistles of that bakery’s version in Denmark.  Lovely.
2 cans Pillsbury Crescent Rolls (I used the Big and Flaky variety but that’s your call)
1/2 cup sugar
2 tablespoons cinnamon
4 cups powdered sugar
2-4 splashes of milk
2 tsp vanilla
1 tablespoon sweetened cocoa powder
Preheat oven to 350.
Line baking sheet with parchment paper.
In a mixing bowl, combine sugar and cinnamon.  Take each crescent roll triangle (8 per can…so take them one at a time) and dredge them in the cinnamon sugar mixture.  Roll up into a crescent.  Repeat for remaining.
Bake 10-12 minutes.  Let cool (about 15 minutes).
In the meantime, combine powdered sugar and milk to make an icing.  (Start with a little milk and work up to the right consistency of icing).  Add vanilla.  Split the icing into two bowls.  In second bowl, add in cocoa powder.  Drizzle each icing over crescent rolls. 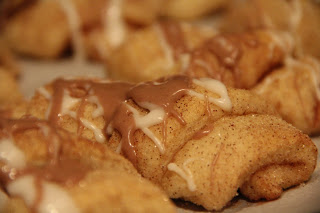 A new breakfast staple in the Shull’s house.