Whew!  Monday night was C-R-A-Z-Y fun!  And then after yesterday’s post…even more fun because you guys rocked with your comments and questions.  Thank you all so much for being so excited for me and showing me so much enthusiasm.  I wasn’t able to answer all of the questions but I think I answered enough that covered the majority of the topics.  Hopefully, you’ll feel like your question was answered.  I love you all!
1. Do the girls get to workout while filming the show?
Yes!  In their down time, they are able to work out.
2. What do the girls eat on the show?
Each location caters food for the entire cast and crew.  If girls have specific food requests (for allergies, diet, etc.), the producers do a great job of meeting their needs.
3. Why didn’t my producer approve the clothes I brought?
She liked what I brought but on this particular day it was extremely hot and humid and Deb (my producer) was just totally digging my green tank top and pink shorts.  It was just a plain Old Navy tank top that I normally sleep in…and slept in the night before!
4. Does everyone fly first class or just Sean and Chris Harrison?
There are a handful of people who fly first class (producers, accountants, Sean, Chris, etc.) and then a crew of over 100 that fly coach.  The majority of the time, Sean did not fly with the contestants.
5. Who does Sean spend the most time with off camera?
Cassie Lambert Scalettar is Sean’s producer, so she was with him one hundred percent of the time.  Also, another producer Adam Mansfield was with him the entire time too.
6. How many crew people were there on the beach watching us tape?
Probably 50…a lot.  It’s fun and wild at the same time!
7. How often does Sean see my kiddos?
At least once a week…this week, twice.  He sees them pretty often :).
8. What did my kids think about me being on TV?
They loved it!  They were really, really excited!
9.  What is my workout routine?
I workout 3 or 4 times a week.  I love boot camp classes, spinning and yoga.  I used to be a runner but it’s not really my thing anymore.
10. What would I have said to Tierra?
I would have been sweet.  I would have listened to what she had to say.  And I would have told Sean to get rid of her.  I really didn’t care what she had to say.  I know enough to know…if all the girls are saying get rid of her, he needed to get rid of her.
11. Can the girls just roam the hotel when they’re having down time?
The girls each have handlers that go with them places to make sure they stay out of trouble and whatnot, so if they leave their rooms to go workout, go down to the beach, etc., a handler goes with them.  Sean and his handler from the Bachelorette became great friends.  They have really strong bonds with their handlers.
12. Did I see any of the girls when I was there?
I saw two girls by accident when I was there.  I was coming out of the hotel gift shop and saw Lesley and her handler going into the fitness room.  I recognized the handler (and then later identified the girl as Lesley) but she didn’t know who I was or anything.  And then, I saw Catherine at the airport with her handler but I didn’t talk to her.  Again…at this point, she had no idea who I was, just another random person in the airport.
13.  Have I signed a confidentiality agreement with the Bachelor?
Yes!!  This girl ain’t talking!

The dates last all day.  We only see 15 to 20 minutes of each date but they are all day affairs.  They’re spending a lot more time together than you might think.

15. Was I disappointed not to meet Tierra?

I really wasn’t!  I had the best time with Chris Harrison during that hour that Sean was sending her home and then after Sean came back to tell me that she was gone, we had my big birthday celebration.  Needless to say, I wasn’t thinking about Tierra AT ALL!

Ok…and you know how I love me some Twitter!  These are my favorite Tweets from Monday night (and selfishly…they’re all about me!).

Tweets from my friend Chris Harrison 🙂

And one day, I will leave Andrew for Bachelor producer Elan Gale… 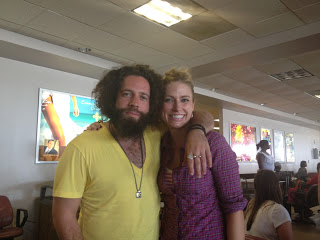 …at least we include Andrew in our flirty tweets ;).

…he also tweeted that I should have taken my top off on air…nice compliment (I guess)  but never going to happen!

And my sweet friend Courtney Kerr (Yes, we’re friends!  Aren’t I lucky?!?!) tweeted me several times…she’s fabulous and gorgeous and I can’t wait until her new show on Bravo starts.

And the lovely Ashley Spivey…Bachelorette alum and one of the funniest people I know, had a sweet tweet for me.  Love her!

But this was my favorite Tweet of the night…

I love him too. Sweets for your Sweetie