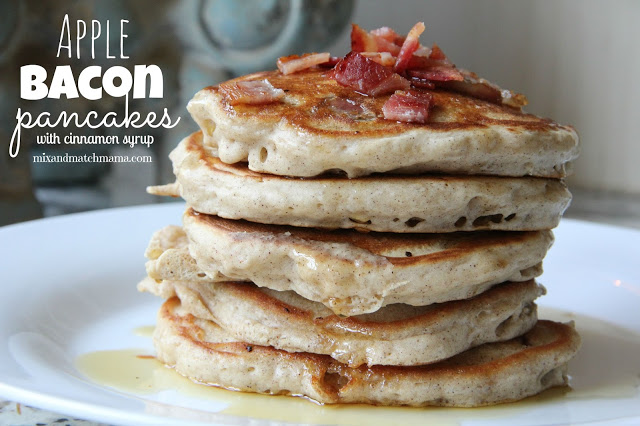 Apple. Bacon. Pancakes.
Let’s just let that sink in for a minute.
I crumbled up bacon and chopped up an apple and put it in my pancake batter.  And then…I topped everything with cinnamon syrup.
This is what you’re making this weekend.  I’m not suggesting it, I’m requiring it.  You and your family will flip.  Seriously…you will want to kiss me on the lips ;).
This recipe makes about 10 pancakes.
Shopping List
2 1/2 cups all purpose flour
1/2 cup brown sugar
4 teaspoons baking powder
2 tablespoons cinnamon
1 cup milk
1 cup apple cider (or juice)
2 eggs
1 cup chopped apple (I used one large Fiji apple, peeled)
10 slices of bacon, cooked very crispy and crumbled (reserve some for garnish)
2 cups of real maple syrup
1 cinnamon stick
Preheat pancake griddle to 350 degrees or stove top griddle over medium-high heat.
Lightly spray with Pam.
In a mixing bowl, combine flour, sugar, baking powder and cinnamon with a whisk.  In a separate bowl, whisk together milk, cider and eggs.  Whisk milk mixture into flour mixture slowly until incorporated (do not over mix).  Stir in chopped apple and most of your crumbled bacon (reserve just a little for garnish).
Spoon pancake batter on to griddle flipping only when bubbles appear on the tops of the pancakes (about 3 minutes per side).
While pancakes are cooking, take your maple syrup and pour it into a microwavable bowl and place your cinnamon stick inside.  Heat the syrup about 45 seconds.  Remove cinnamon stick and drizzle cinnamon syrup down over pancakes.
Listen friends, this recipe was life changing.  I don’t say that very often…but I mean it very much today.  Life. Changing.
Enjoy!