It’s Day 3 of our trip to New York!
If you missed yesterday’s post on Days 1 & 2 (where I was on Today!) click here.  And don’t forget, you can see Erika’s post on our Day 3 here.
So, we woke up Wednesday morning and had the whole day in front of us.  We decided to watch the news and eat breakfast in our hotel room before heading out right at 9:00.  On this day, we were heading south. 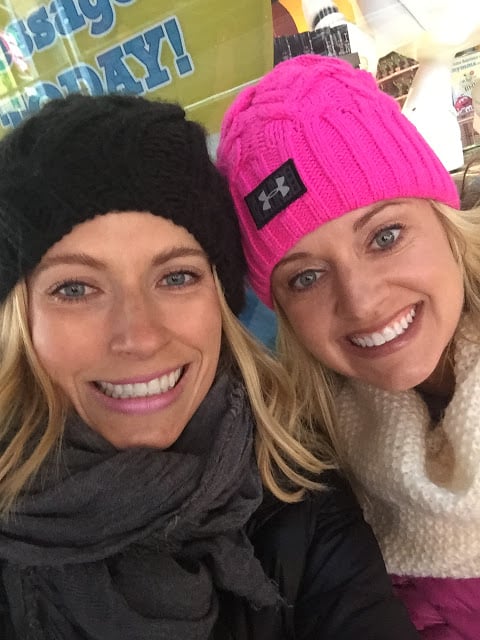 Bundled up and leaving Midtown! 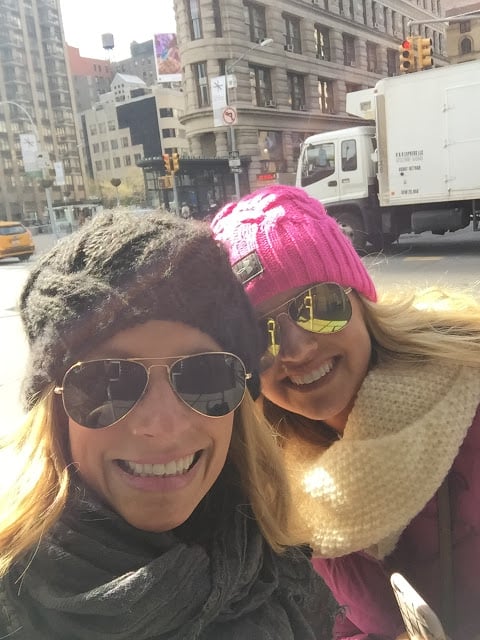 We walked from Midtown down to the Flat Iron District.  On the way, we passed Macy’s on 34th Street.  One of these days, I’m going to need to come at Thanksgiving… 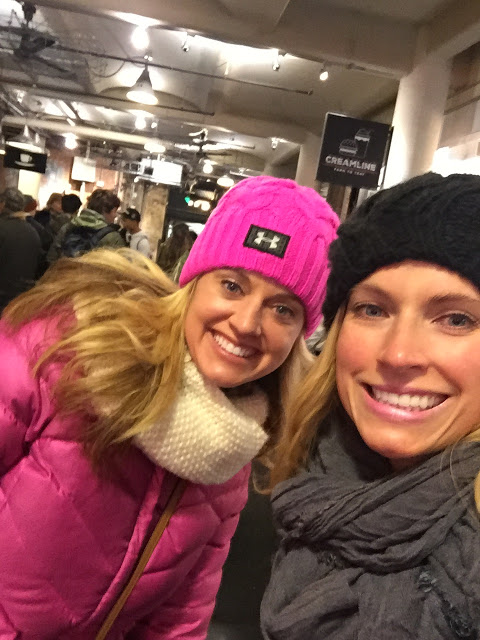 We continued walking down to Chelsea to visit Chelsea Market. 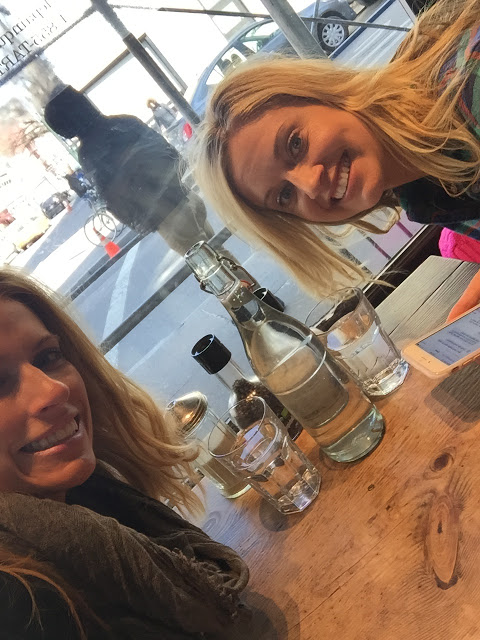 And then we stopped for a delicious lunch (goat cheese and zucchini quiche!) as we were heading to Carrie Bradshaw’s apartment.
As we were approaching the address of the building used for Carrie Bradshaw’s apartment on Sex and the City, these security type people told us the road was closed due to filming of The Blacklist.  So, we decided to skirt around them, hit up Magnolia Bakery and then see Carrie’s apartment from the other side…but… 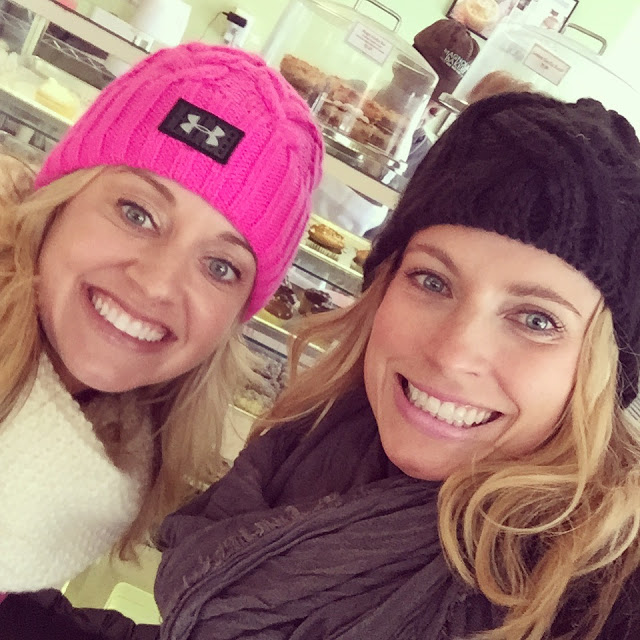 …they were actually filming the scene from The Blacklist right outside of Magnolia Bakery.  We asked some other security people if we could go in the bakery and they said yes.  So, we went in the bakery, bought goodies and ate them while watching them film right outside the window (we were watching along with the bakery staff…it was so much fun!). 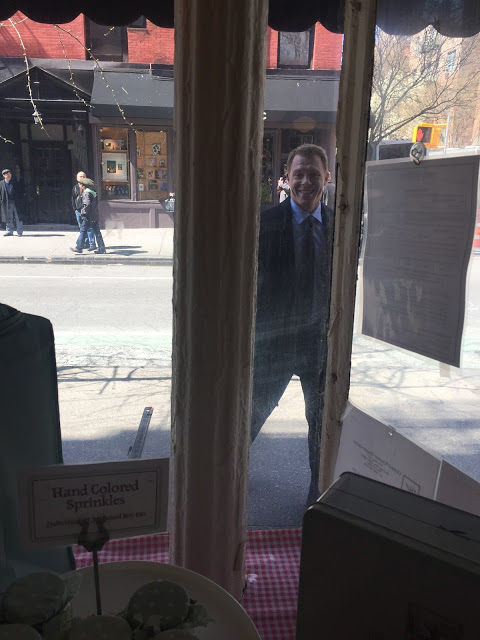 Ha!  Here is actor Diego Klattenhoff (he plays Don Ressler) looking at us looking at him :). 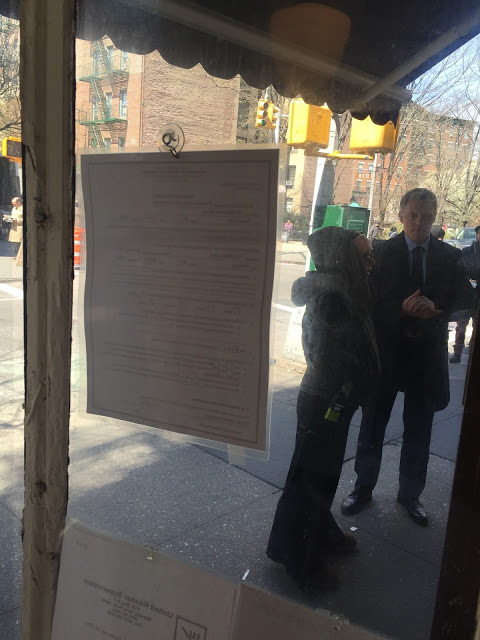 He’s trying to work…but it’s hard to concentrate when two girls eating brownies have their faces pressed up to the glass staring at you and taking pictures.
After they shot their scene several times, we decided to run for it during a break and we left the bakery.
And we ran straight to Carrie’s apartment :).

Just two girls hanging out in from of Carrie Bradshaw’s house.
We left Carrie’s and walked down further toward where Bethenny Frankel lives (Erika has pics of that!).  We looooove Bethenny Frankel!  On the way there, we passed the famous building that is used as the Friends apartment.  After we left Bethenny’s, we took an Uber down to One World Trade Center to see where the towers had once stood.
We left One World Trade Center and decided to walk up about 30 blocks to… 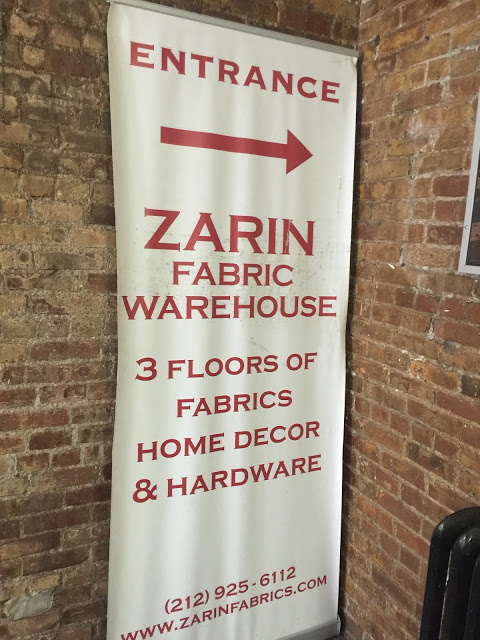 …Zarin Fabric.  Real Housewives of New York fans, you get this.  After we left Zarin, we strolled through China Town, Little Italy, Soho, Noho and then grabbed coffee and walked 40 blocks north back up to our hotel in Midtown.
We arrived back, dressed appropriately this time for dinner (no dresses and cute shoes…we wore layers and booties!) and went to dinner at Carmine’s before our show. #holymanicotti
The meal was outstanding!
And speaking of outstanding… 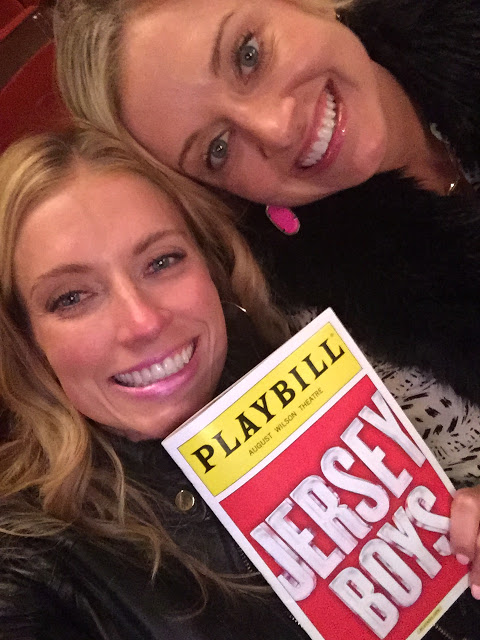 …we saw Jersey Boys!  Wow! This show was so much fun!!  We had the BEST time!
After Jersey Boys, we headed back to our hotel and went to sleep.  Thursday morning, we woke up and headed back home.
Three days in NYC, over 20 miles walked, three fabulous dinners, two wonderful shows, one amazing experience at Today and the very best girl to do it all with…I felt extremely blessed.
Whew!  It was such a fun week…but it’s always so good to be home with my four favorite people.  I couldn’t have  done any of this without my sweet hubby who took care of every single thing while I was gone (kids, laundry, dishes, carpooling, dinner making, lunch assembling, homework, dance, and everything else) while working from home at the same time.  Thank you Andrew!
Now, don’t forget, tomorrow is our first link up for… 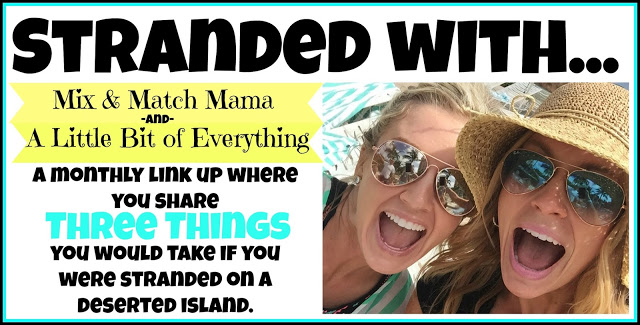 Our topic tomorrow is: What three things would you take on a deserted island from your medicine cabinet?
Blog and link up TOMORROW!
Here are all of the dates and topics… 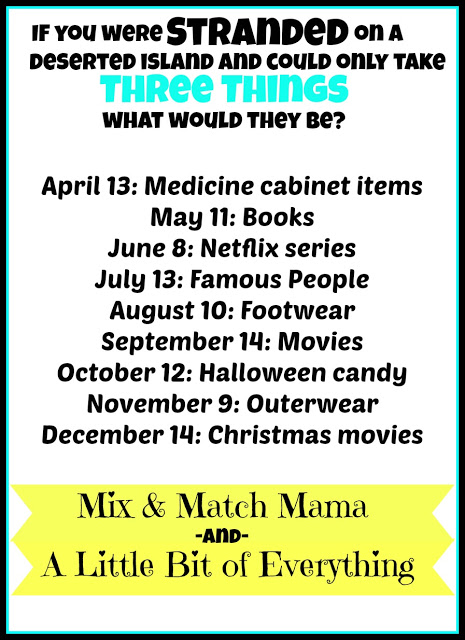 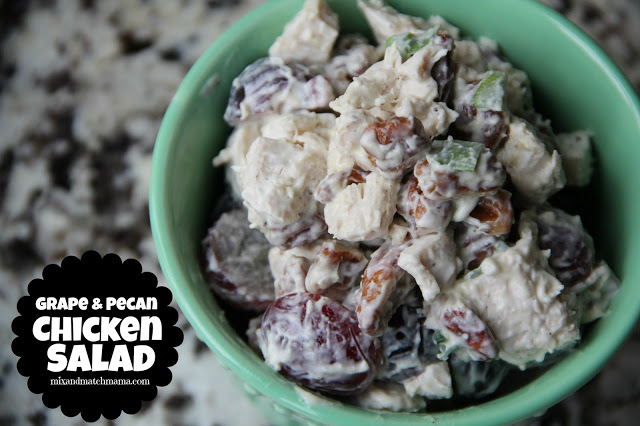 …my Chicken Salad recipe!
Make this for lunch or dinner.  Serve it alone or as a sandwich.  Either way, your family will LOVE IT!
See the recipe here.
Have a great day friends!