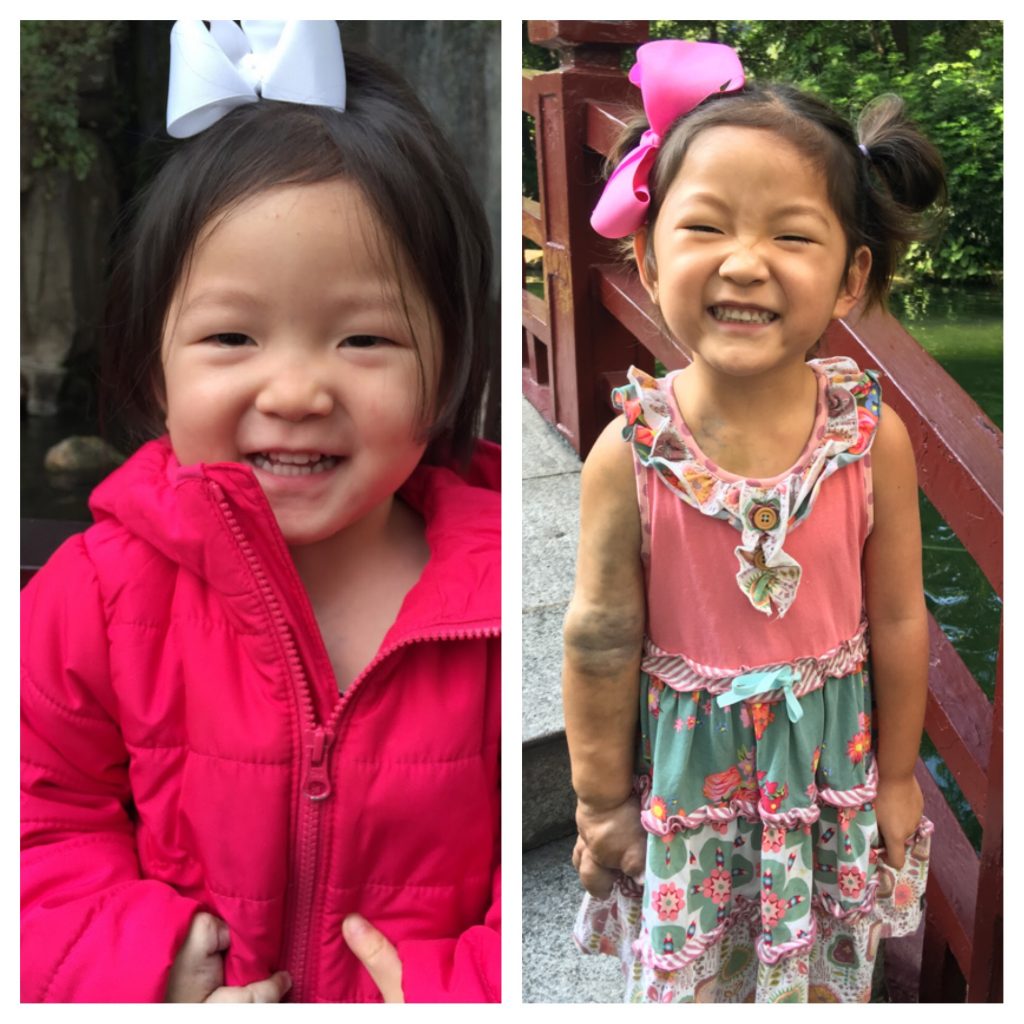 It’s all about Ashby today.

This year, I’ve been blogging about our adoption with Ashby every three months, so today is the day.  As of today, October 4, we’ve had this precious girl 21 months.  Honestly, it’s very hard for us to think of life before Ashby.  Andrew and I talk about it all the time and it’s just hard to wrap our brains around it.  It feels like she just has always belonged with us.  Ashby is joy.  My kids are a lot of things to me, but when I think of Ashby London Shull, I think joy.  And tough.  What a combination! 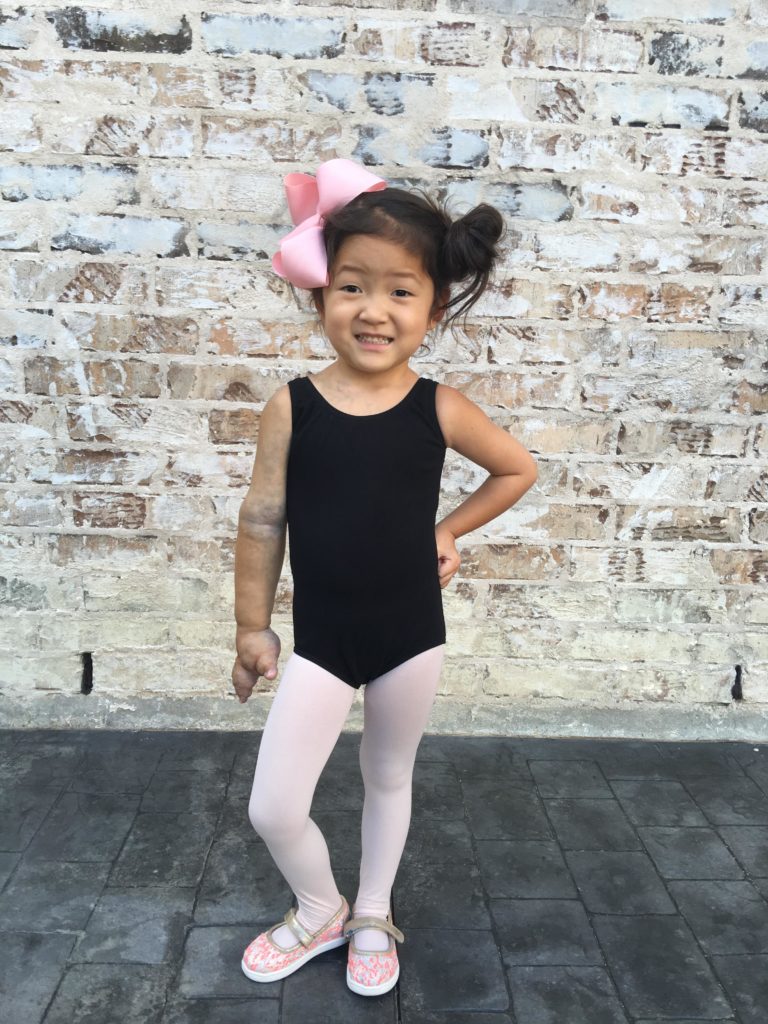 In September, Ashby started dance and she LOVES it!  She has been wanting to do dance for a long time, so she was pumped when it was time to start.  She takes a little combination class (tap and ballet) once a week and just adores it.  In the spring, we’re thinking about her joining a team sport.  She has such a happy spirit about her and loves to be with people, that we think it might be fun for her to try something that involves a team (plus, it will help her hand/eye coordination too!). 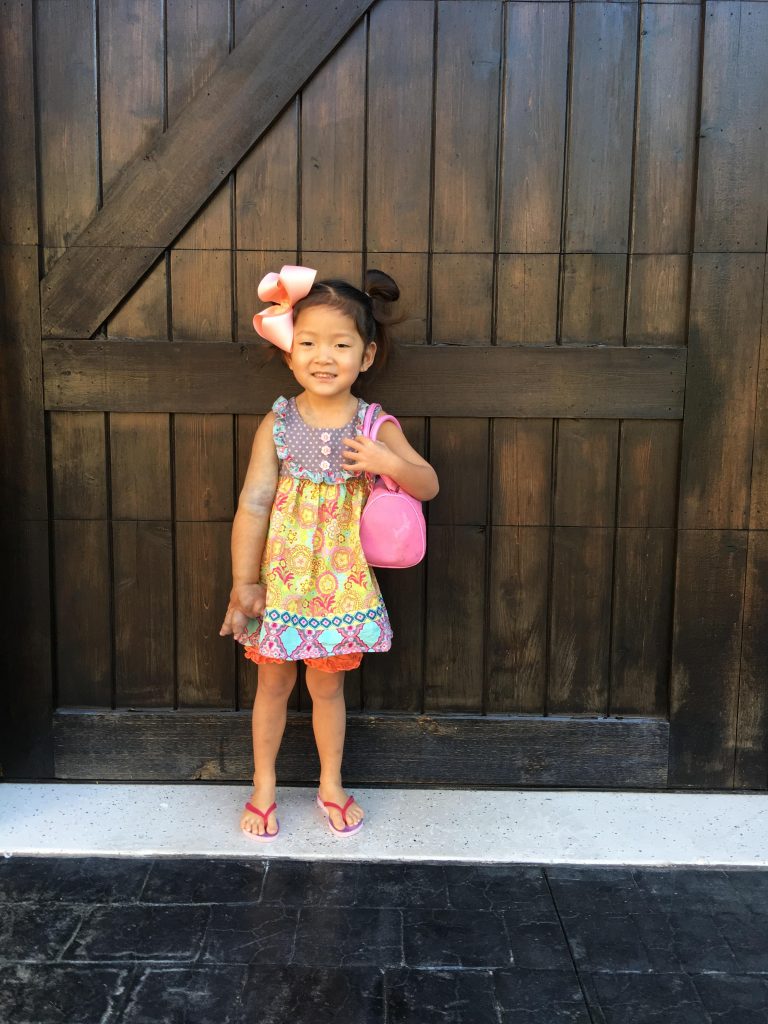 Last month was hard in terms of Ashby’s health.  I was brought to tears on more than one occasion trying to connect with specialists.  Between Ashby and now Madeley, I’ve learned one thing, you have to be an advocate for your kids’ health and stay on top of things or else you’ll be forgotten.  Ashby is in the middle of these procedures that will (hopefully) shrink her veins and reduce her chances of throwing clots.  These procedures require her to be put under once a month, they’re extremely painful and they come with a 10 day recovery period.  Right now, she’s had two and really, there’s no end in sight.  At first they thought she would only need six, but it might be more.  It just breaks my heart.  Multiple doctors have told us that this must be done for her health, but it’s still so hard.  I have to take her to followups in-between procedures and often when we get there, she’ll say, “I go to sleep this time or not?”.  She knows what’s going on.  At her follow up last week, the doctors were thrilled to pieces because for the first time ever, we were able to feel her little knuckle in one finger.  Up until now, we haven’t been able to feel knuckles in three fingers (because they’re so severely swollen), but now, one little knuckle can be felt.  Also, she can make a fist with her right hand.  She has never been able to make a fist and now, she can.  Such little things are HUGE milestones for us.  This means, for now, we stay the course. 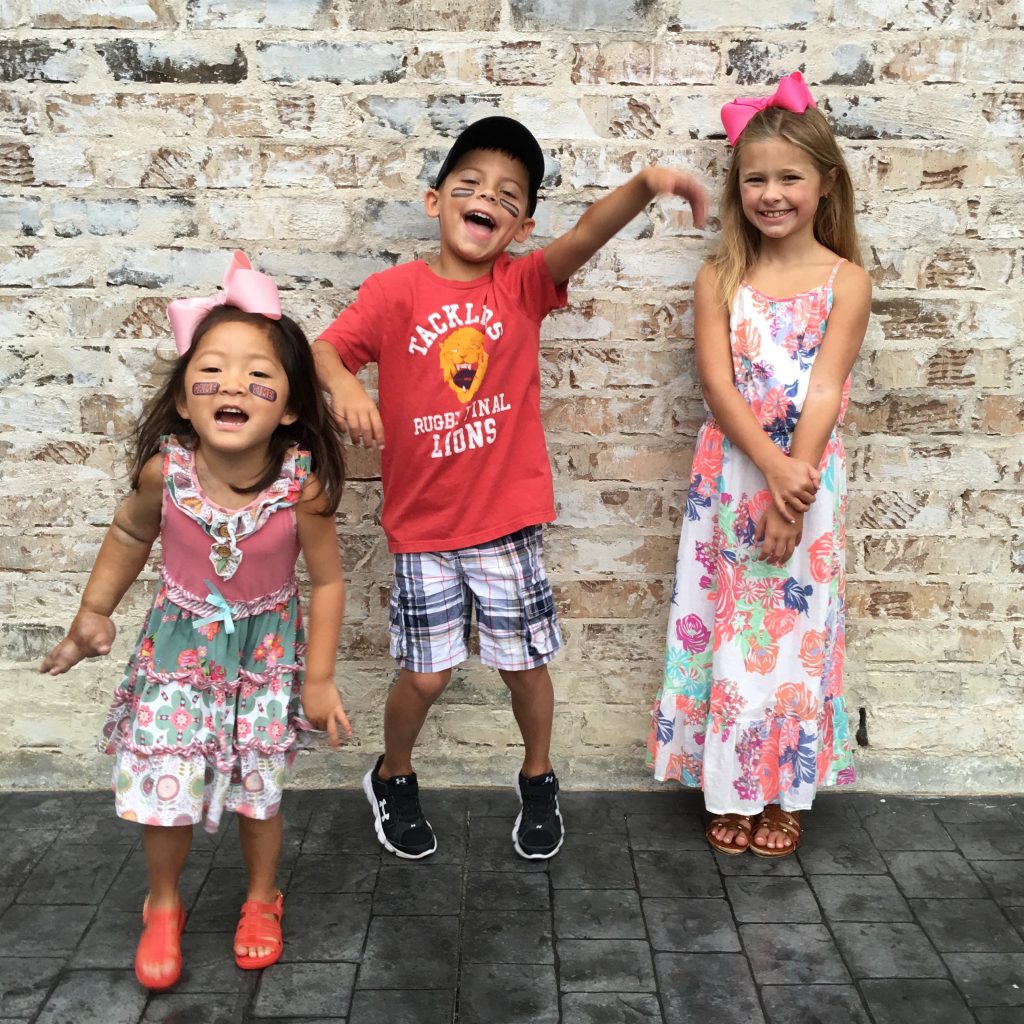 Here are some of Ashby’s favorite things right now:
TV Show: Peppa Pig
Movie: Cinderella
Thing to do outside: ride her bike
Food: she loves Tex-Mex!
Favorite toy: a stuffed bunny and anything Disney princess 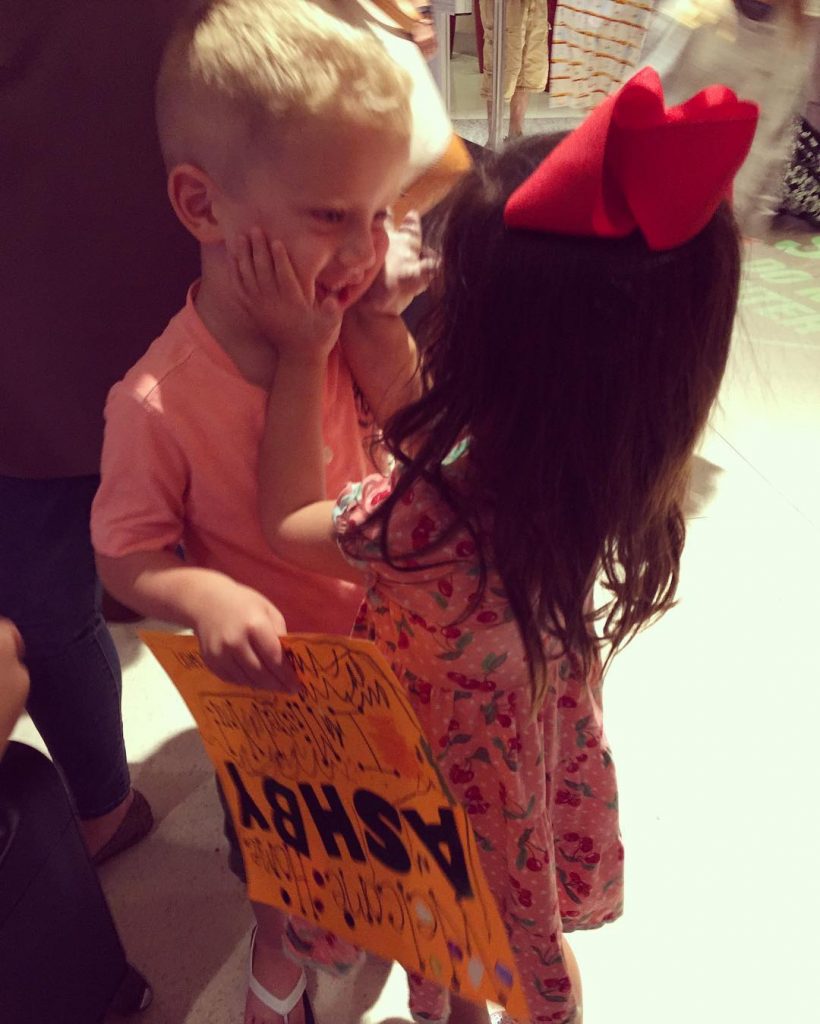 On her first month adoption post, I answered these questions.  Here are the updated answers:

1: Language- Well, Ashby fully grasps the English language now.  As far as articulation goes, we’re in speech therapy and can see a tremendous improvement!  We understood everything Ashby was saying, but we knew that other people probably only caught 50% of what she was saying, so in July, we started speech therapy once a week and not only does she love it, her articulation has come so far!  Her doctor even commented on the improvement between one procedure and the next.  We really wanted her to take her time learning the language, but then when we felt she really knew it, we wanted to help her articulate herself so that when she was talking, others understood her.

2: Physical Development- She is growing like a weed!  Ashby is now in the 40th percentile for height.  Over the last six months, she’s grown long and tall.  Besides her KTS, she is absolutely healthy and developing just fine.  She is just a growing girl :).

3: Sleeping- Ashby sleeps like a champ at night next to Kensington.  Those two have been sleeping together for a year now and she does great.  She still needs a nap most days or else she crumbles in the early evening.  She naps for a little bit every afternoon before we pick up the big kids from school.

4: Food- Ha!  She eats everything with gusto!  Erika was laughing because just yesterday, she took her and Bowen to get lunch and Ashby ordered the avocado roll from the sushi bar.  She loves to eat veggies the most.  The other morning, she had roasted broccoli for breakfast.  And then a bowl of Fruit Loops. 🙂

5: Attachment- Thankfully, attachment hasn’t been anything we’ve had to really work on with Ashby.  I know it hits kids differently, but right now, that’s not been an issue.

6: Poppy- Ashby enjoys the dog :).  Kensington is obsessed with the dog, but Ashby does love to play fetch with her and will talk to her as she walks by.  She was terrified of her at first, so we’ve come a long way.

7: Potty Training- I mean, she’s totally potty trained except, she cannot sleep in undies at night.  I don’t remember how my other two big kids stopped needing Pull Ups at night, but Ashby still does.  Some have suggested that I just put her in her undies and let her have an accident to learn…but she sleeps in the top bunk of a bunk bed AND THERE IS NOTHING WORSE THAN CHANGING TOP BUNK SHEETS.  Period.  End of story.  It’s like some form of torture.  So…I covet any suggestions!  She’s fine during nap time without a Pull Up, but she can’t go all night.  Help, please :).

9: Playing: Ashby has learned to be a great independent player but if she had a choice, she prefers the company of someone else (preferably Bowen).  Kensington prefers to play by herself, but sometimes, she’ll let Ashby tag along.  Smith on the other hand, prefers to play with others, so those two play together a lot.  She loves anything and everything Disney Princess, puzzles, blocks, legos, and all things crafty or artsy (coloring, Play-doh, glue, cutting with scissors, etc).

So, that’s a little update version of our first adoption post.

Ashby is truly such a joy.  Her personality, easy-going attitude, zest for life is contagious.  She makes our family complete in such a special way.  She’s also such a role model to my big kids because she is just so tough.  She is the perfect example of someone not being defined by her circumstances. 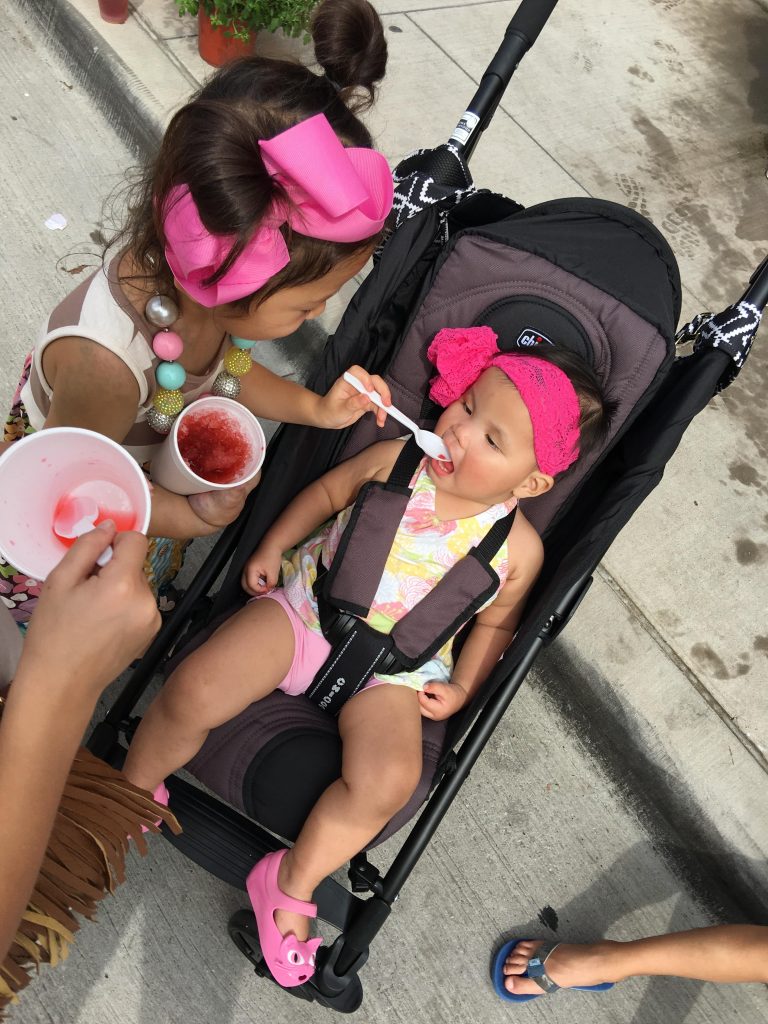 Now, about 3½ weeks into being a big sister has really set well for Miss Ashby.  She has been very hands-on with Madeley.  She’s very affectionate, generous and loving too.  I’m not sure if that will change later or not…but for now, she seems genuinely happy to have Madeley in our family. 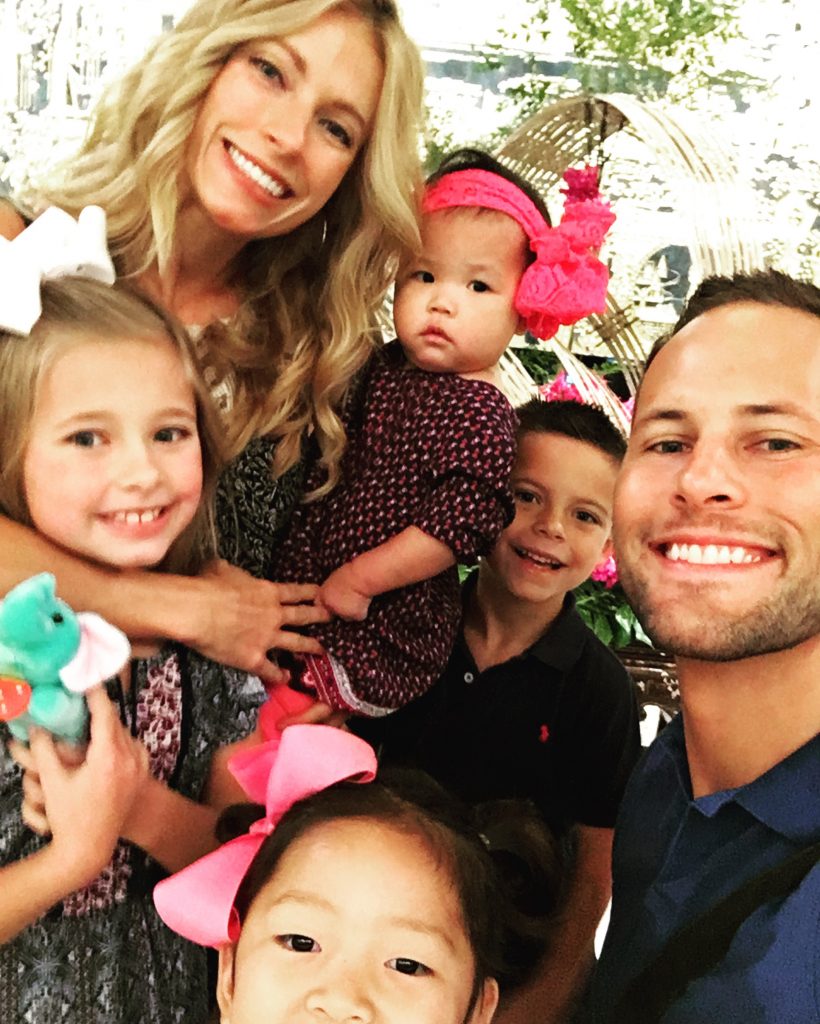 One last little thing…we’ve always had a really open dialog with Ashby about where she’s from.  She knows she’s both Chinese and American, that she’s adopted, that we traveled really far and picked her because she is so special. You know, it’s a watered-down version, but it’s a good start for a four year old.  While we were in China, she asked twice where Madeley’s mom was.  These were such sweet and special conversations for us to have with her.  We always say the same things: Madeley’s mom (and yours) loved her very much and wanted to keep her but she couldn’t.  We don’t know why she couldn’t keep her, but of course, she would have wanted to.  We know that she would be so happy to see that Madeley (and you) have a forever family now.  We always talk so highly of these women because in my heart of hearts, I believe them to be true.  I believe these mamas would have loved to have kept these girls but were not able to and that they would be happy to see them with forever families now.  We pray for these women and I always think to myself, maybe one day in Heaven, I’ll get to meet them.  Wouldn’t that be cool?  I would love to hug both of their necks and thank them for making sure my babies were left in safe places where they were to be found so that they had the chance of a forever family.

So, next time I talk about Ashby’s adoption, it will be her Two Year Gotcha Day!  We just love this little girl so much.