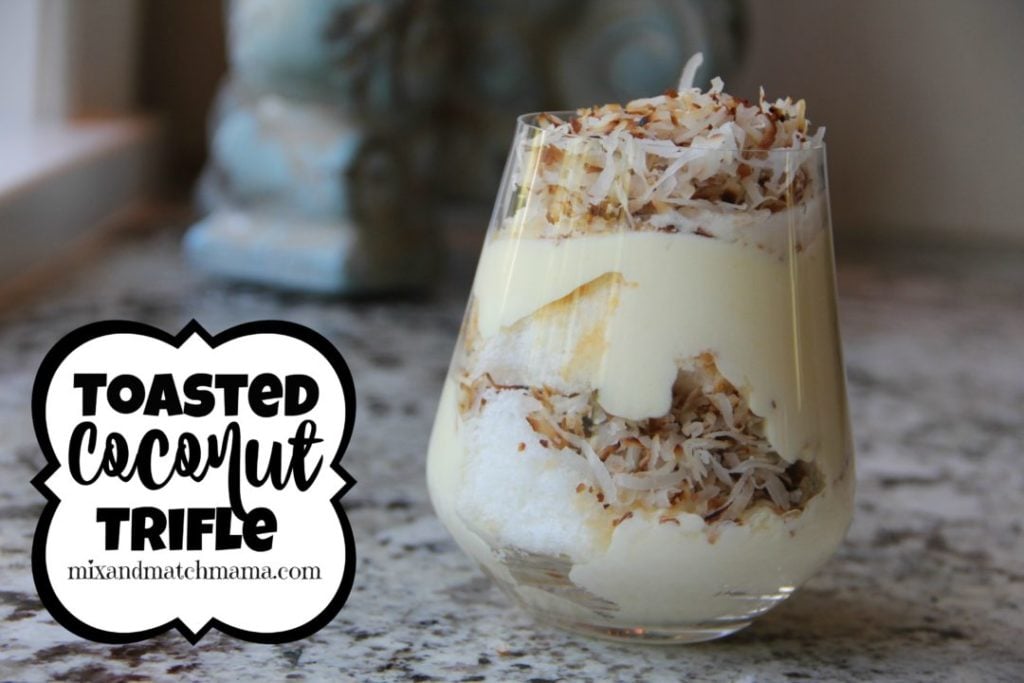 In my family, two things are a must at Easter…coconut and carrot.

No matter where we’re celebrating or what our main course is, we have to have something with coconut and something with carrot for dessert.  So, today, I’m sharing the easiest little trifle you’ve ever made.  My Toasted Coconut Trifle has chunks of yummy angel food cake inside which just makes it all the better.  And bonus, the best part about trifles are that they only get better when you make them in advance.  And when you’re hosting Easter dinner, don’t you want as many things as possible made in advance?  I sure do!

This recipe makes one big trifle or about 8 in a wine glass or small jar.

Shopping List
1 angel food cake (either store bought or homemade), torn into big chunks
1 (5 oz) box of instant coconut pudding (use vanilla if you can’t find coconut)
2 cups of milk (I used 2%)
2 cups of Cool Whip
about 2 cups of toasted coconut (see below for how I toast my coconut)

Before you begin, you need to toast up your coconut.  I take a bag of flaked coconut (found on your chocolate chip aisle) and place it in a clean, dry skillet over medium-high heat.  With a wooden spoon, I toss the coconut around until it’s nice and toasted up.  It only takes a few minutes, so don’t take your eyes off of it.  Once the coconut is nice and toasted, remove it from the heat and set aside to cool.

Next, make sure your angel food cake is torn into big chunks, set aside.

In a mixing bowl, whisk together your coconut pudding and milk for about two minutes.  After it starts to thicken up, whisk in your Cool Whip.