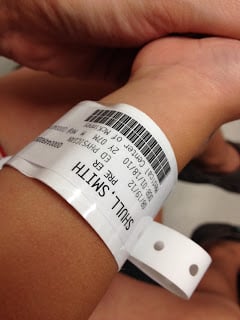 On Sunday night, Smith woke up from his nap with a fever and complaining of head and neck pains.  I called our good friends the Smiths (who are both in medicine) and asked them what to do…Sarah told me to bring Smith to her house for a quick temp check and exam.  (We joke that the Smiths should charge a co-pay at their front door because it’s a revolving door of our friends and their kids with medical problems!)  Anyway, Sarah called her hubs who was luckily working in the ER that night and he said for me to bring Smith in.
Side note: I am not a “take your kid to the doctor for every little thing parent”.  To a fault, I am not!  Kensington walked around with a broken arm for SIX DAYS before I took her to the emergency room.  Sheaffer swears Smith had bronchitis last winter but I never took him in.  I’m just not a medical worrier…if you met my mother, you would understand.  We had to be bleeding from the eyeballs to get medical attention growing up :).
But lucky Smith, got to visit the ER… 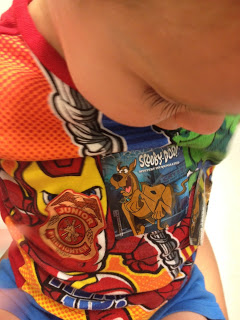 …and he had the BEST TIME EVER!   This is him showing me his 4 stickers he received.  He also got a green Popsicle, to meet 3 firemen, 1 police officer, 2 doctors, a nurse, got to watch the Lion King in his own private room and stay up way past his bedtime.  He loved it!  He was fine by the way…they wanted to make sure he didn’t have meningitis (because of the head/neck complaining) but he just had a mild ear infection.  By the time Dicky came to check on him, Smith had already received a second round of Tylenol and was practically swinging from the rafters in his little room.  He has already asked to go back to the ER several times.
I took two other really cute pics of his smiling face but Blogger isn’t publishing them and I’m tired of messing with it…just imagine his cute face :).
Thank you Sarah and Dicky for first of all, always taking care of our sweet kiddos and second of all, for giving Smith the time of his life.
﻿