I have been waiting to talk about Episode 7 for MONTHS!  I have soooooo much to say!  Ok…so remember waaaaay back in October when I celebrated my 31st birthday?  Well…when you guys thought I was at home celebrating with my family, I was really in St. Croix celebrating with my little brother :).
Here’s how it happened…
Andrew and I went to Europe for 10 days back in October…when our plane touched down at DFW Airport, I switched on my phone for the first time since we had departed, and what did I have waiting for me on my phone?  A voice mail from one of my favorite Bachelor producers telling me that Sean missed his sister and wanted me to come out to St. Croix to see him for her birthday…in less than a week!  I was exhausted, jet-lagged, missing my kiddos, behind on my work, and not caring about any of that!  I was super excited and totally up for another trip.  It was operation secret! 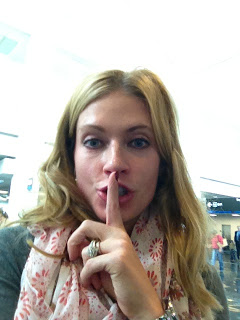 Here I am at the airport at 4:00 AM on Wednesday, October 24th about to board a plane to Miami and then connect to St. Croix. 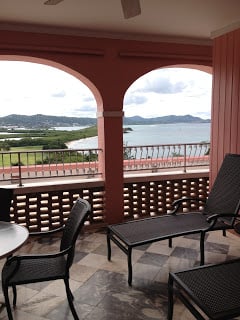 I arrived at the beautiful hotel and took in the view from my hotel room patio. 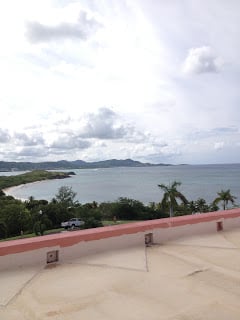 And then I headed to the beach!
Here’s what happened when I arrived at the hotel…another one of my favorite people, Executive Producer Alycia Rossiter, met me in the lobby and told me where I would be staying in the hotel and then pointed to the area of the hotel that the girls occupied.  She told me I could go anywhere I wanted on the property but asked that I not go to where the girls were (which I totally understood!).  She also said that I would be seeing Sean the next day (my birthday) on camera (which made sense to me…I’m a Bachelor fanatic…these things must be captured live on film, right?!)
I was by myself, with an i-Pad full of chick flicks, a stack of books, a huge hotel room, a gorgeous beach and unlimited room service…the mama has never been happier. 🙂 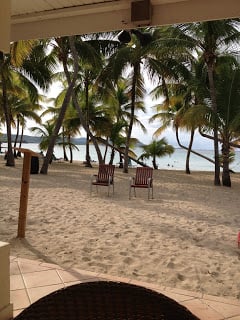 My view from where I ate lunch.  Did I mention that I was in heaven???
That night, I curled up in my pjs, watched a movie, read a book and slept in (which as you know, the mama NEVER does!).

The next morning, HAPPY BIRTHDAY TO ME!  I ordered room service, read and did absolutely nothing. It was glorious!  And then… 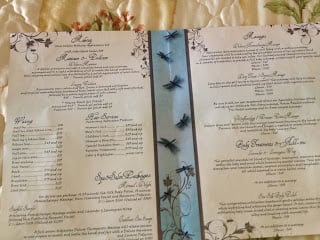 …I was informed that my brother wanted to give me something special for my birthday…I could have any spa treatment I wanted that morning!  (The cute part was that they kept repeating over and over that Sean actually paid for the treatment…the Bachelor did not pay for it.  He really wanted his big sis to know that the gift was from him and not from the Bachelor.)  Thanks to my super sweet brother, I had a fabulous massage! 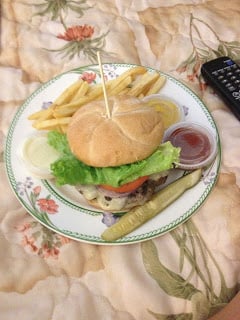 And then I ate a burger and watched a little more TV…hey, it was my birthday!
And then…the best stuff happened!  This was officially the MOST FUN DAY OF MY LIFE!
My favorite Bachelor people came to my hotel room to get my microphone on me and tell me where I’d meet Sean.  At this point, I had no idea who was left in the house, how many girls were there, or what exactly Sean and I would be discussing.  I hadn’t seen Sean in 7 weeks, so I was just so excited to finally be able to see him again!  I went out to the beach and saw Sean and then we sat down and chatted (which you saw last night on TV).
Now…while you watched Sean go off and get Tierra (and then watch her have another break-down), I was waiting back on the beach for him…with my new BFF… 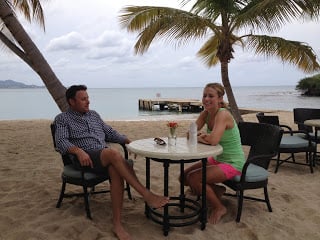 …this awesome guy came out to wish me a happy birthday.  I heart Chris Harrison. 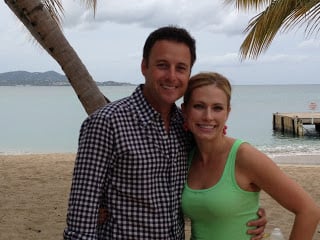 Birthday love with Chris!  He sat out and talked to me for about an hour (while Sean was “dealing” with Tierra).  Then, Sean came back to explain to me that he sent Tierra home and we chatted a bit more…then… 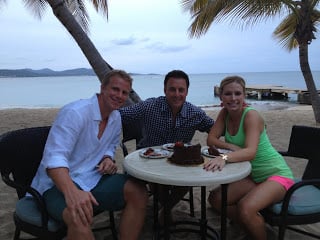 …Chris came back out with a birthday cake and candles and the entire crew sang Happy Birthday to me :).  And then the three of us dove into this chocolate cake! 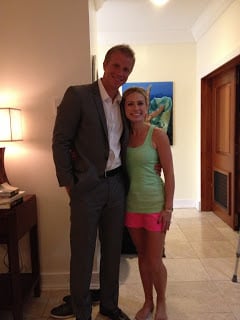 After we left the beach, I went back to Sean’s hotel room and hung out with him while he got ready for that night’s rose ceremony. 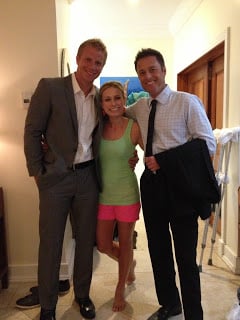 And then my new BFF Chris came over to say hello :).
Ok…so if this was the most fun day of my life, the following day was a really close second.  I don’t have any pictures but I’ll just briefly explain…
The next day, the entire crew flew back to the states to split off for Hometown Visits.  Spending the day in an airport with these people was one of the highlights of my life.  I am not sure I’ve ever laughed more.  I had the absolute best time hanging out with them!  My new favorite person Chris Harrison even swapped seats with me so that I could sit up in First Class with Sean and he sat in Coach.  Seriously, the nicest people on earth!  My birthday was MADE!
Ok…one last thing…you like what I’m wearing on TV?  Don’t I look good?  Don’t you want to know what fabulous outfit I have on for my big TV appearance????  I’m wearing my pjs.  Yes.  Between coming home from Belgium and leaving for St. Croix, I went to JCrew and Nordstrom and bought 4 new outfits…well, when my producer Deb came to prep me for meeting up with Sean, she wasn’t a fan of any of my outfits.  So…she grabbed my old green tank top out of my suitcase (the one I slept in the night before!) and said, “wear this!”.  And so I did.  I wore my tank top that I normally sleep in…the one I had slept in the night before…on national TV.  I am just so glamorous. 😉
This was such a special time with Sean.  This was truly a trip of a lifetime.
I will do a Q&A post this week about my trip…about behind the scenes of the show…whatever you like.  Just leave me a question and I’ll try and get it answered.
This morning, I will be live in the studio with Kidd Kraddick in the morning!  Tune in around 7 am CST!

And you know that I’m always inspired by food.  Which of my recipes reminds me of St. Croix??? 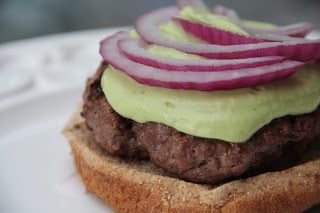 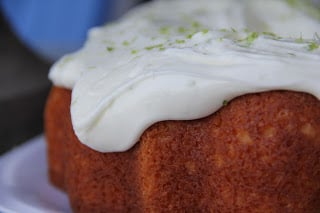 You can check out all of my food here at Mix and Match Mama.

Don’t forget to check out A Bachelorette Told Me To over at Sheaffer’s blog.  Her post should be extra special and extra hysterical today!