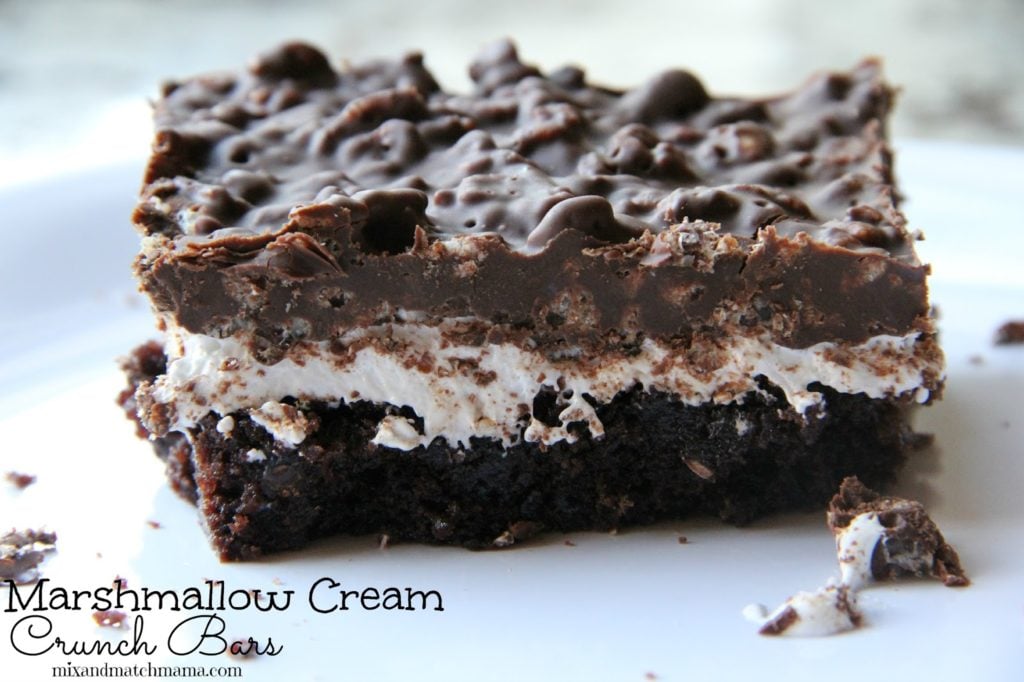 The other day, Kensington was sitting next to me on the couch and we were pinning yummy recipes when she spotted this one from Random Sweetness.  She said  “mommy, you need to make these”…and so I did :).
For the bottom layer, I used a brownie mix and then I followed Random Sweetness recipe and added the marshmallow cream followed by a peanut butter Rice Krispies chocolate layer.  I mean really…is that fabulous or what?!?  Kensington loved the bars…they’re creamy, crunchy and a whole lot of chocolatey.
I also used a 13 ounce jar of marshmallow cream instead of the recommended 7 ounce jar.
Shopping List
1 package of brownie mix
1/2 cup vegetable oil
2 eggs
1/4 cup water
1 (13 ounce jar marshmallow cream)
1 cup creamy peanut butter
1 (12 ounce) bag chocolate chips
3 cups Rice Krispies cereal
Preheat oven to 350 degrees.
Grease (I used Pam) a 9×13 baking dish.  Set aside.
In a large mixing bowl, beat with an electric mixer your brownie mix, vegetable oil, eggs and water until smooth.  Pour batter into your prepared baking dish.  Bake 22 to 24 minutes or until a toothpick inserted in the middle comes out clean.  Try not to over-bake.
Remove from oven and cool on counter.
Once cooled, spread the marshmallow cream down over the brownies.
In a saucepan over low heat, melt the peanut butter and the chocolate chips together until combined.  Stir constantly until just combined.  Remove from heat and stir in your cereal.  Pour the cereal mixture down over the marshmallow cream layer.  Refrigerate at least 2 hours before slicing and serving.
These bars were crunchy and creamy…while also being chocolately and peanut buttery.  So yummy!!
Thanks Random Sweetness for adding to my favorite bar recipes!