China: That time we got into a Chinese automobile accident

We have had a great couple of days here in Ashby’s birth city of Xi’an.  When we arrived here several days ago, they told us that this was a very important historical city but kind of small…only 8 million people.  There are a lot of people over here in China. 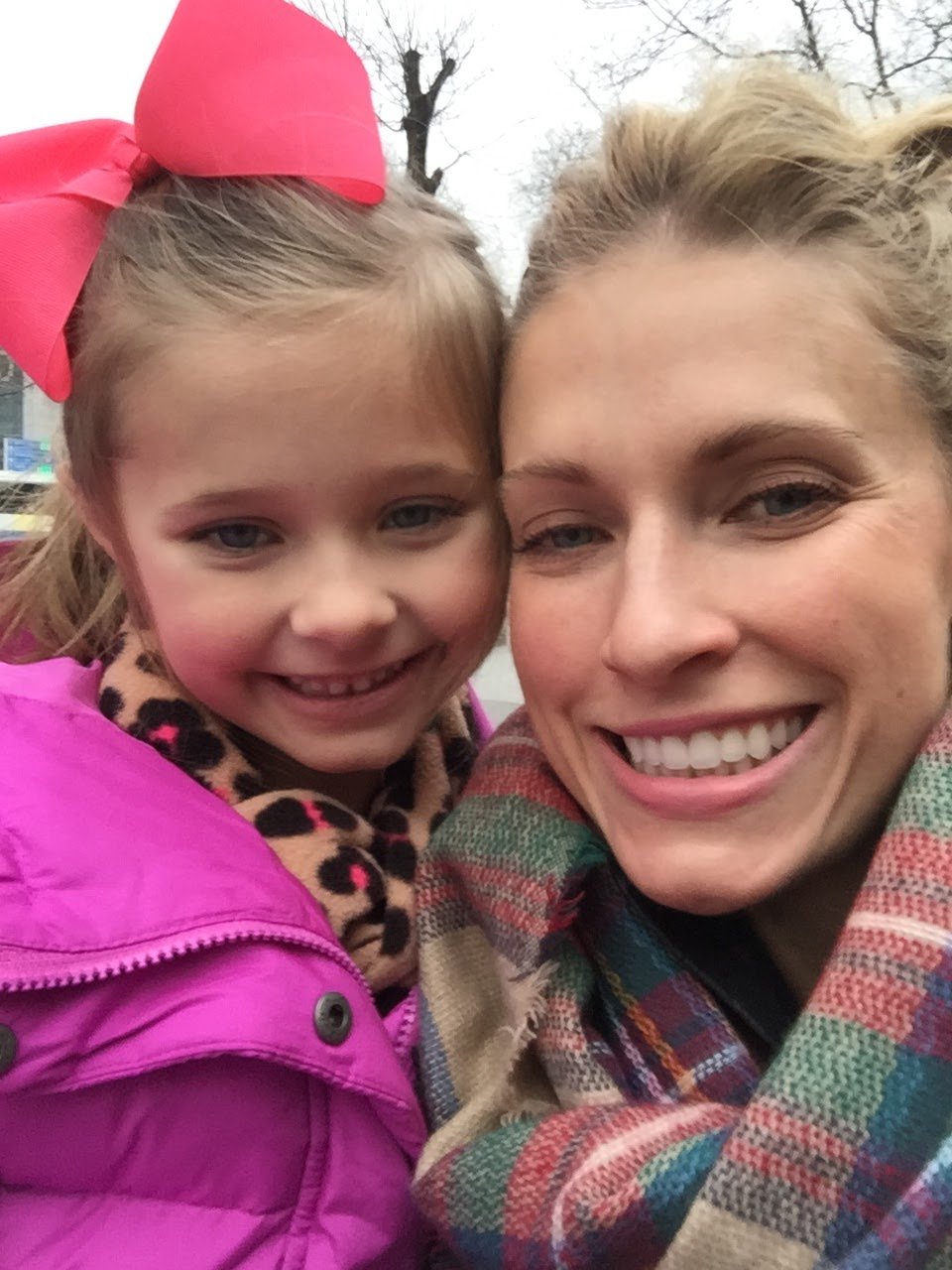 Yesterday (that was Tuesday depending on when you’re reading this), we headed out to visit Xi’an’s city wall and bell tower.  Both sites were the perfect way for us to spend our morning/early afternoon.  The weather was crisp and cold but perfect for little kiddos who needed to stretch their legs and run around. 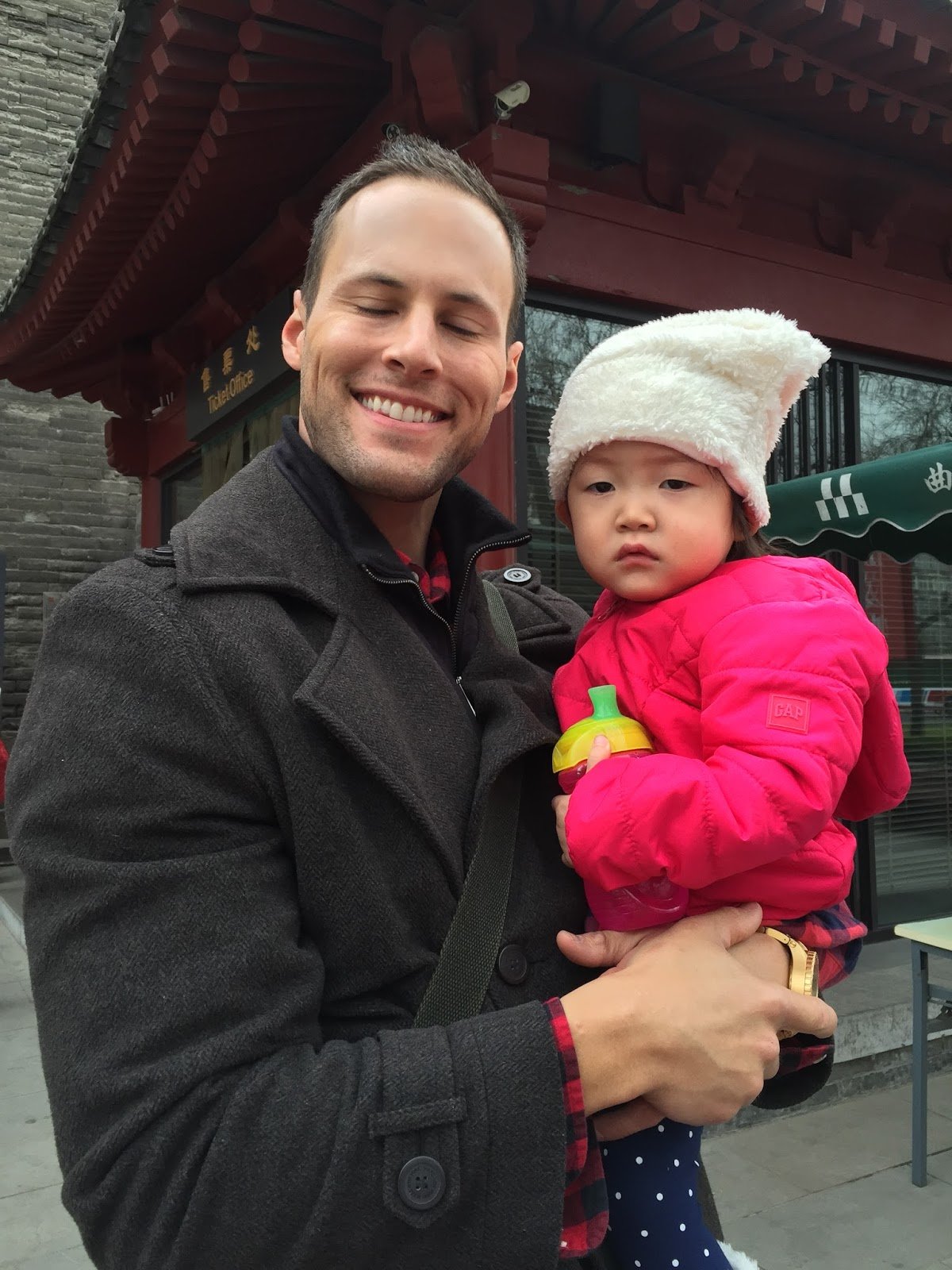 Yes, Andrew’s eyes are closed…but how sweet does my Ashby look?!?!  She might look serious but this girl has major cute attitude.  She will open up when she thinks we’re not looking at her too hard. 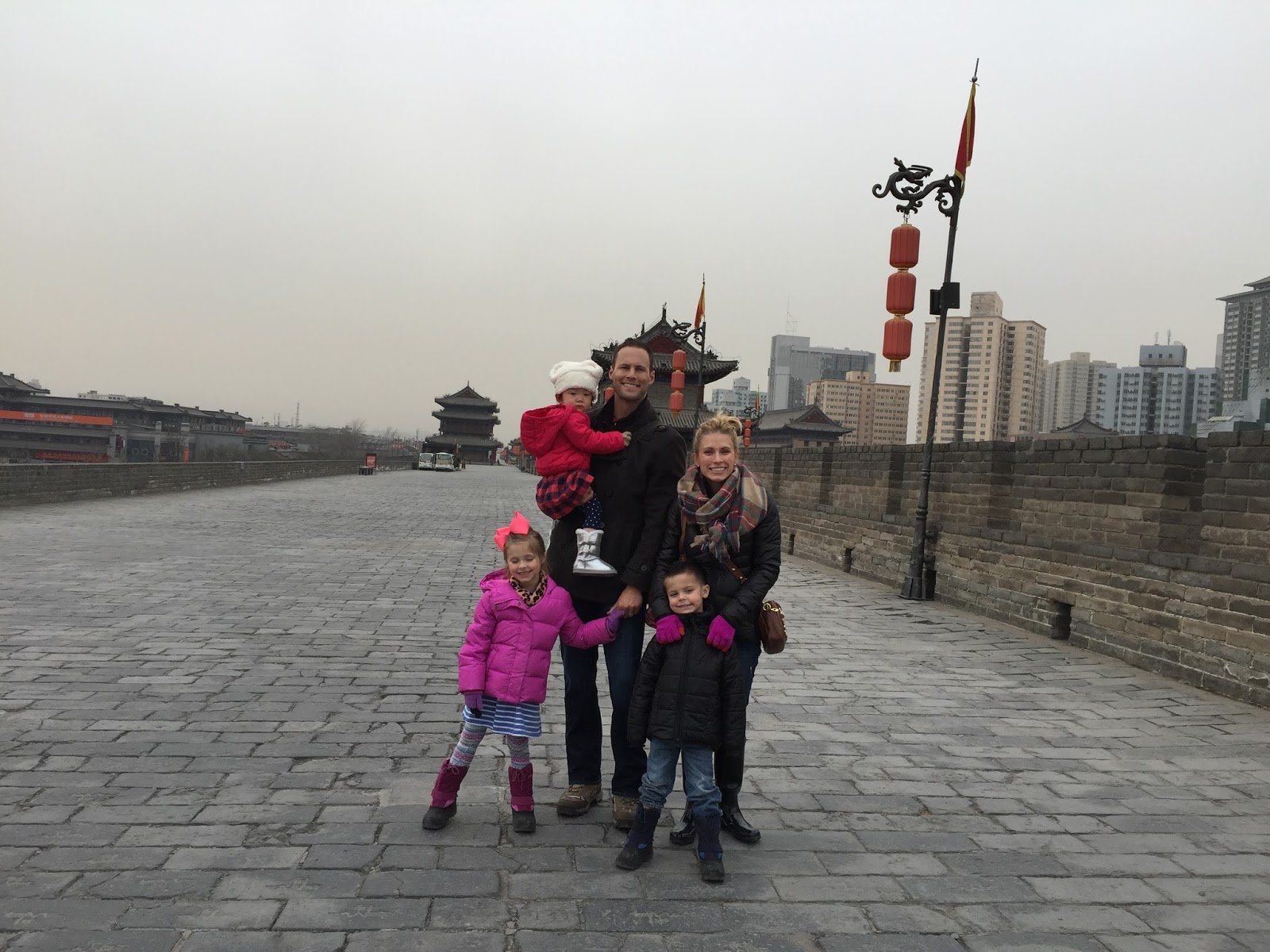 On top of Xi’an’s city wall.  The wall makes a circle almost 26 miles long with part of the city in the center of the circle and more on the outside.  The kids loved to run free up here. 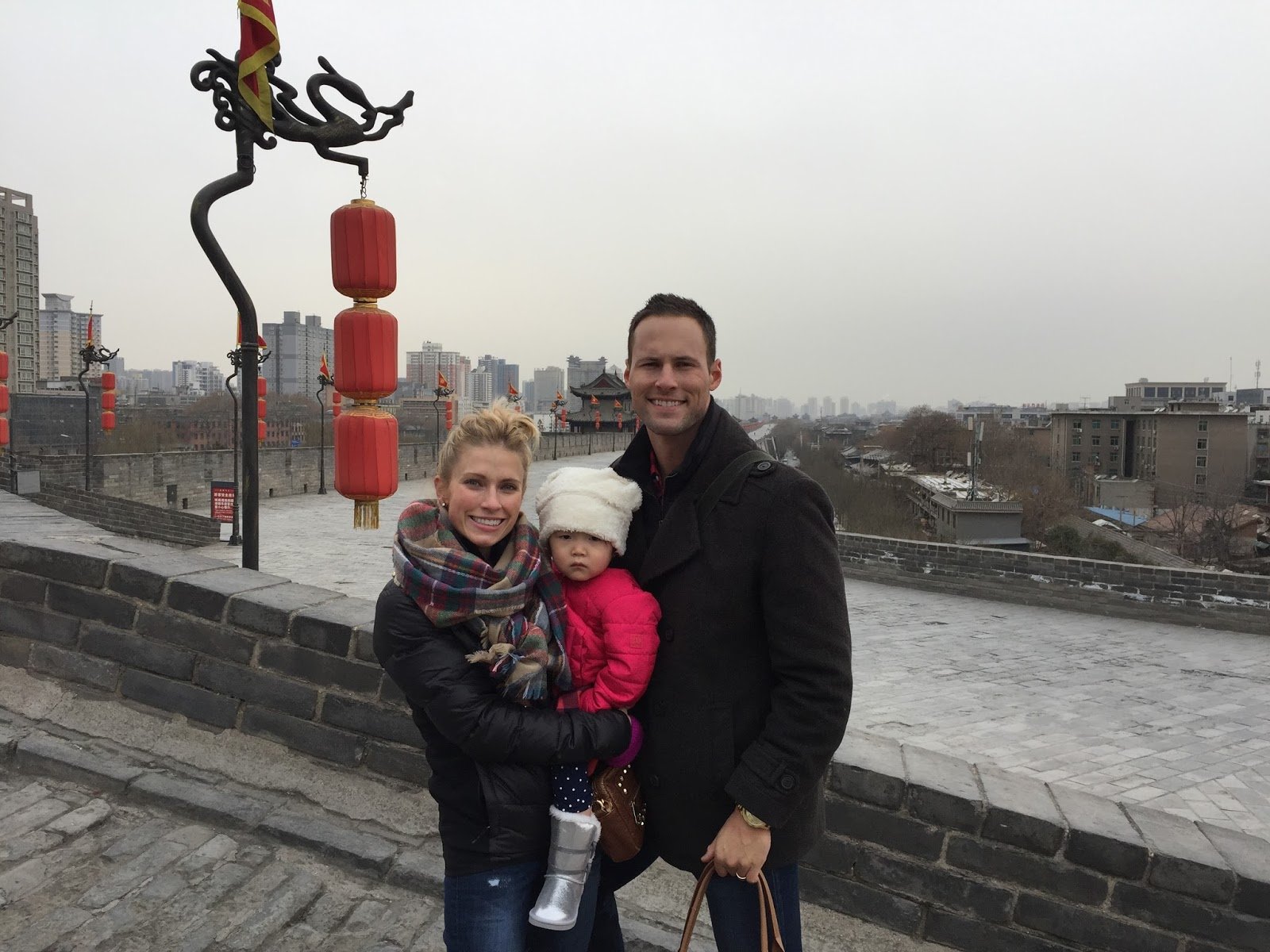 Us and our little…the two bigs were running wild. 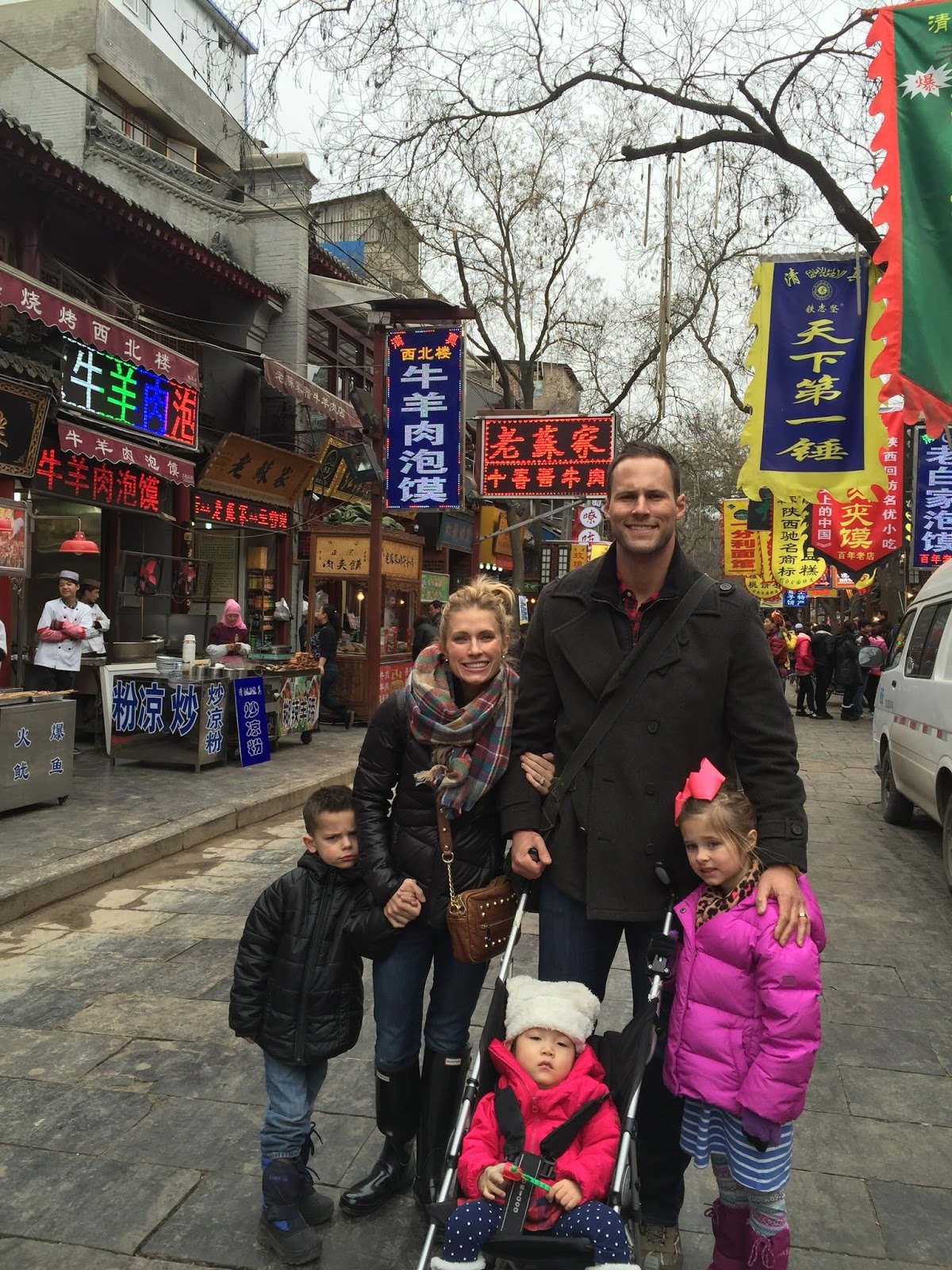 They call this Muslim Street and it was my favorite thing we did yesterday.  The street was lined with fun lights and vendors selling all sorts of food.  We loved it so much that we walked it twice.  We bought fresh pomegranate juice (they literally squeezed the thing into your cup) and candy that they were making right there on the street (a walnut candy that we can’t stop eating…it reminds us of a Butterfinger).  This was such a fun street! 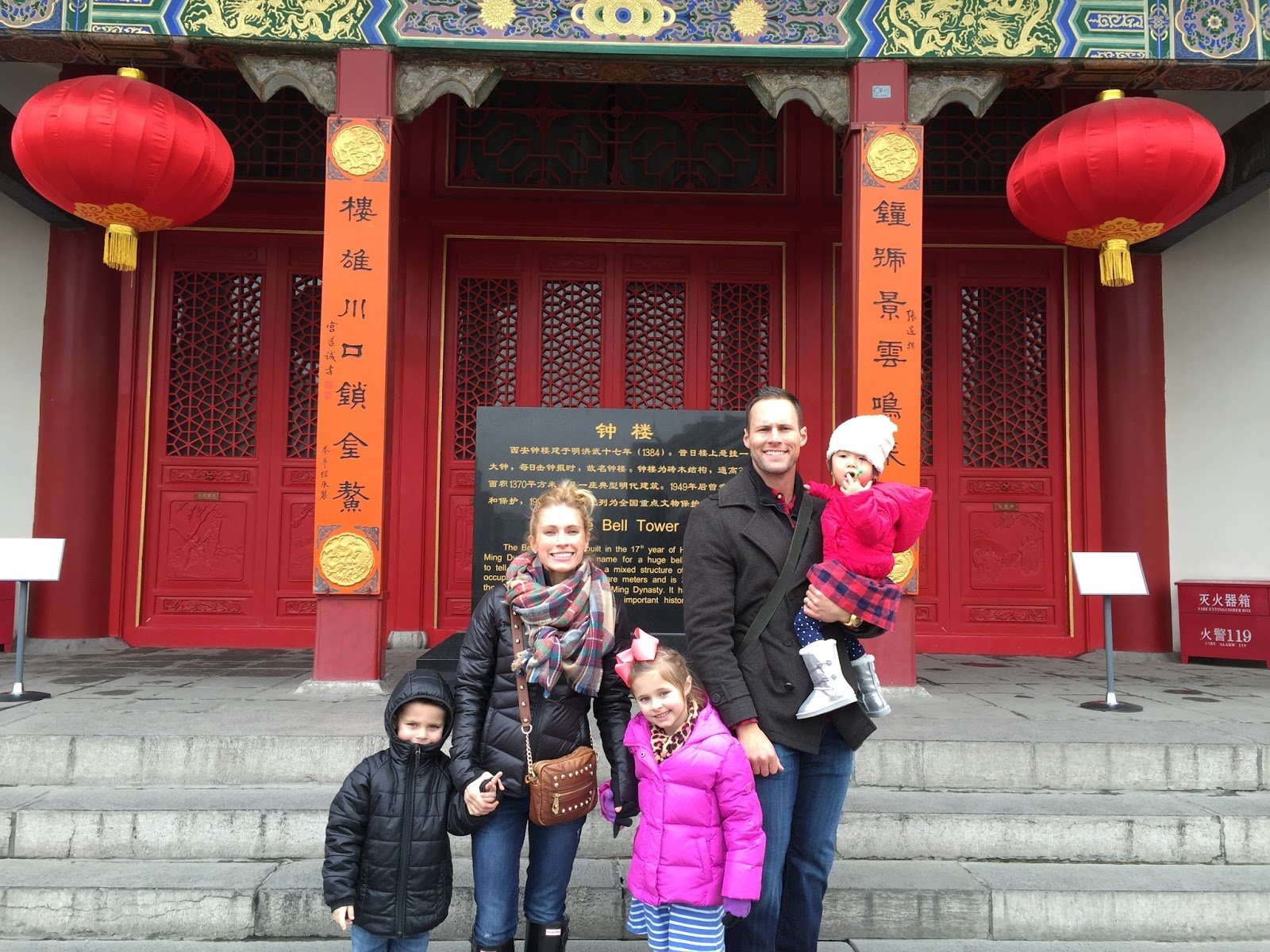 We walked from Muslim Street over to the city’s Bell Tower which is in the center of the city. 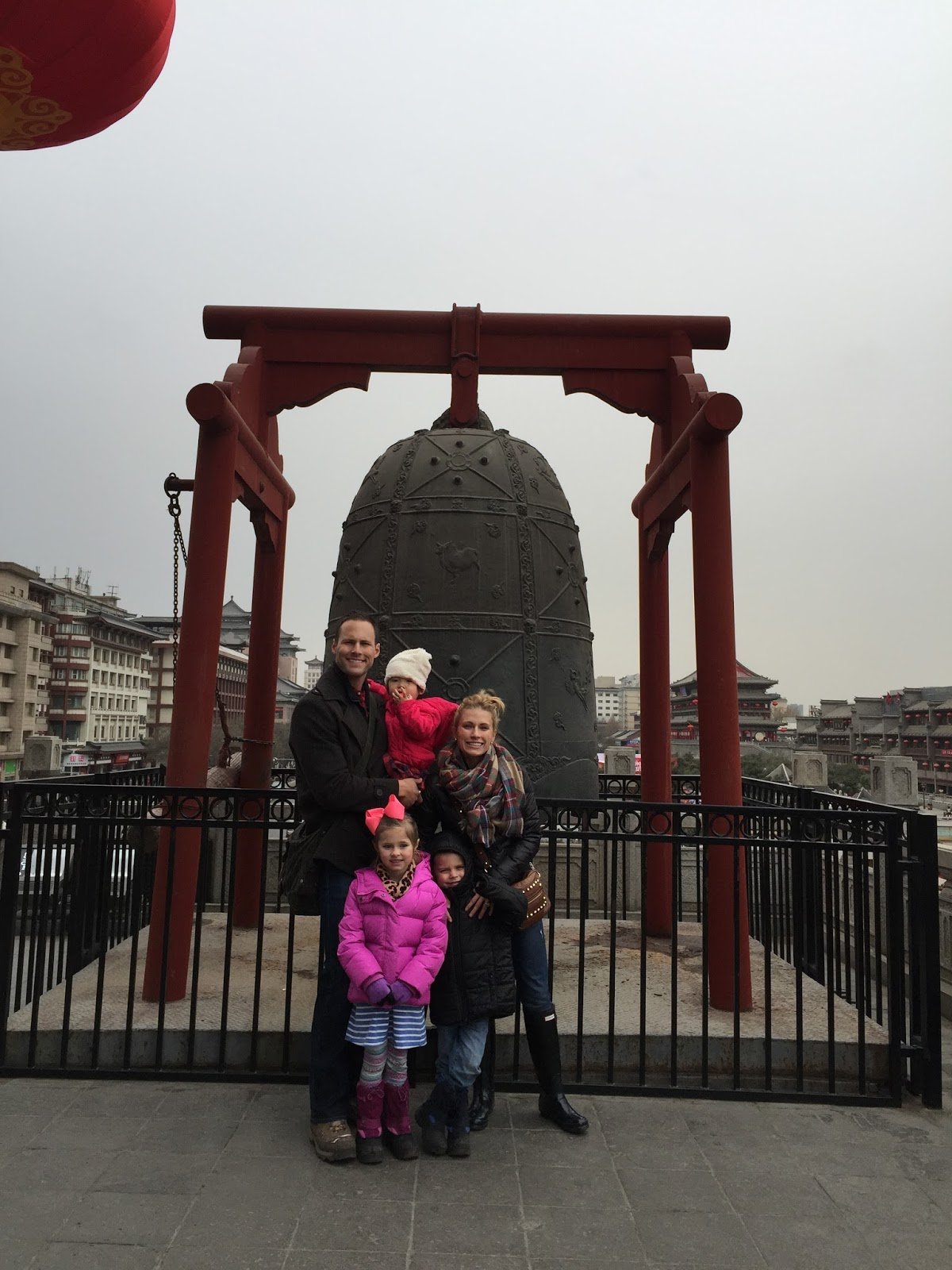 And we climbed right up to take in the view and see the old bell. 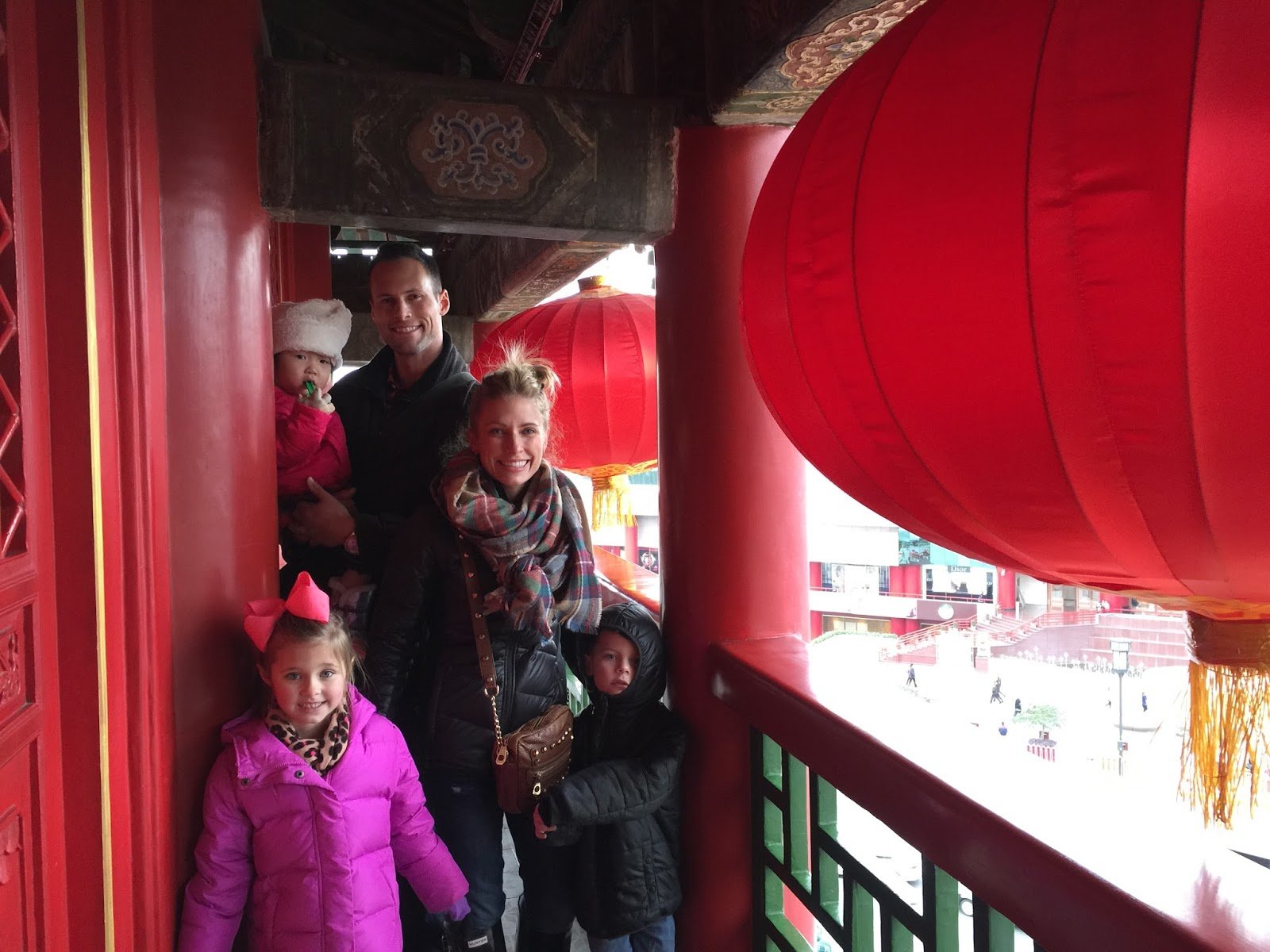 On top of the bell tower.

Our new little routine is this: we eat breakfast and then head out to site see until 1 or 2.  Then we come back to the hotel and Ashby takes a nap while the rest of us unwind with a movie, book or something else quiet.  Then, Ashby wakes up and we play until dinner.  After dinner, we walk to a local ice cream shop for dessert.  This has been our routine every day in Xi’an and I don’t see it changing.  It’s working out really well.

Yesterday, Smith asked me to watch a movie with him and “sit still the whole time and not get up”.  Smith has quickly stepped into the middle child role and is missing his mommy time.  Kensington has become a HUGE help and pretty much stayed the same, so far, Ashby is a breeze but Smith…he’s been pushing my buttons and has been extra clingy.  Sweet boy…we’ll figure this all out together.

Anyway, while we were watching the movie yesterday, I heard Kensington and Ashby doing this… 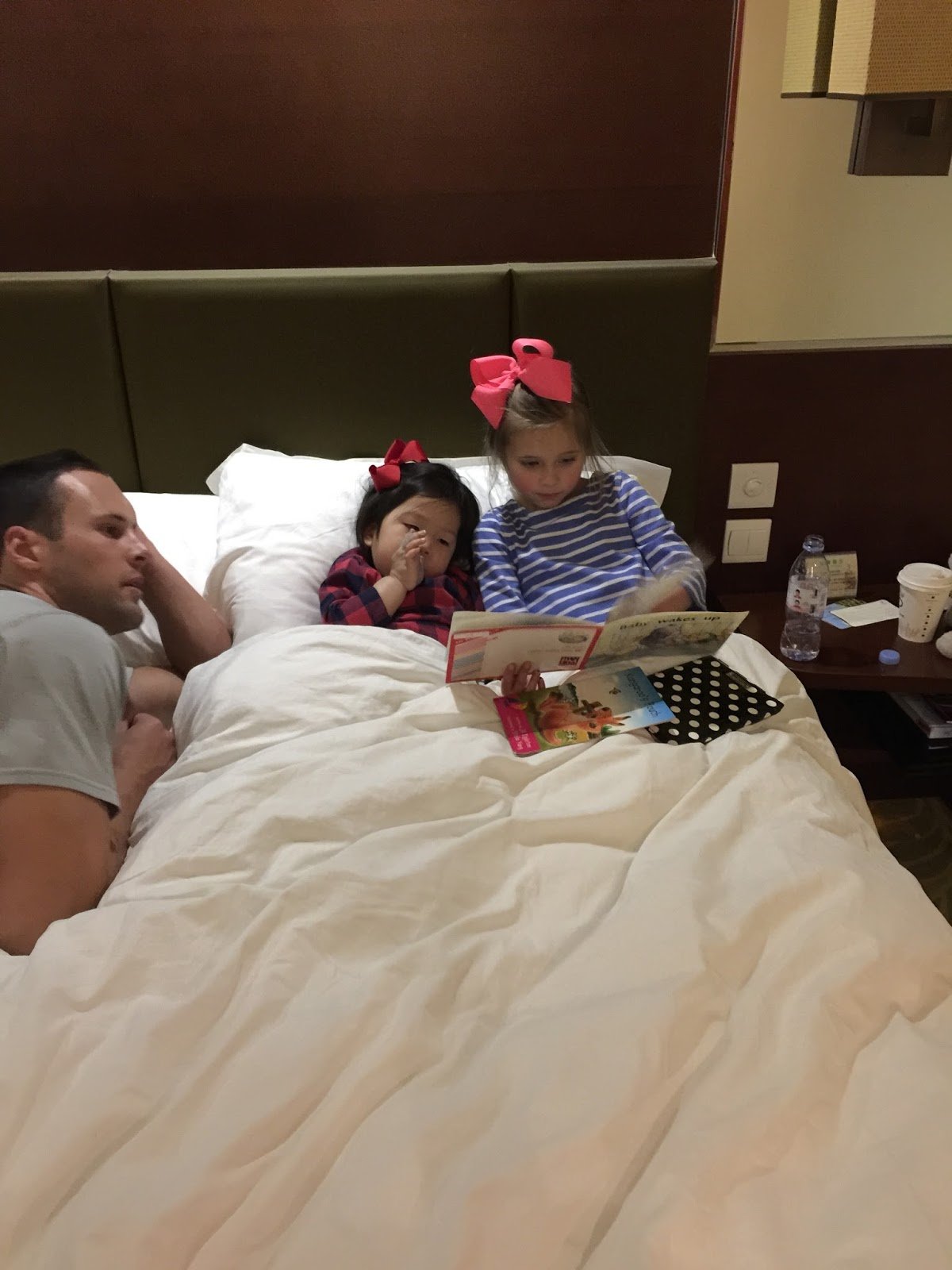 It works out really well for me that I have one child who needs to read a lot for school and another child who loves to be read to :). 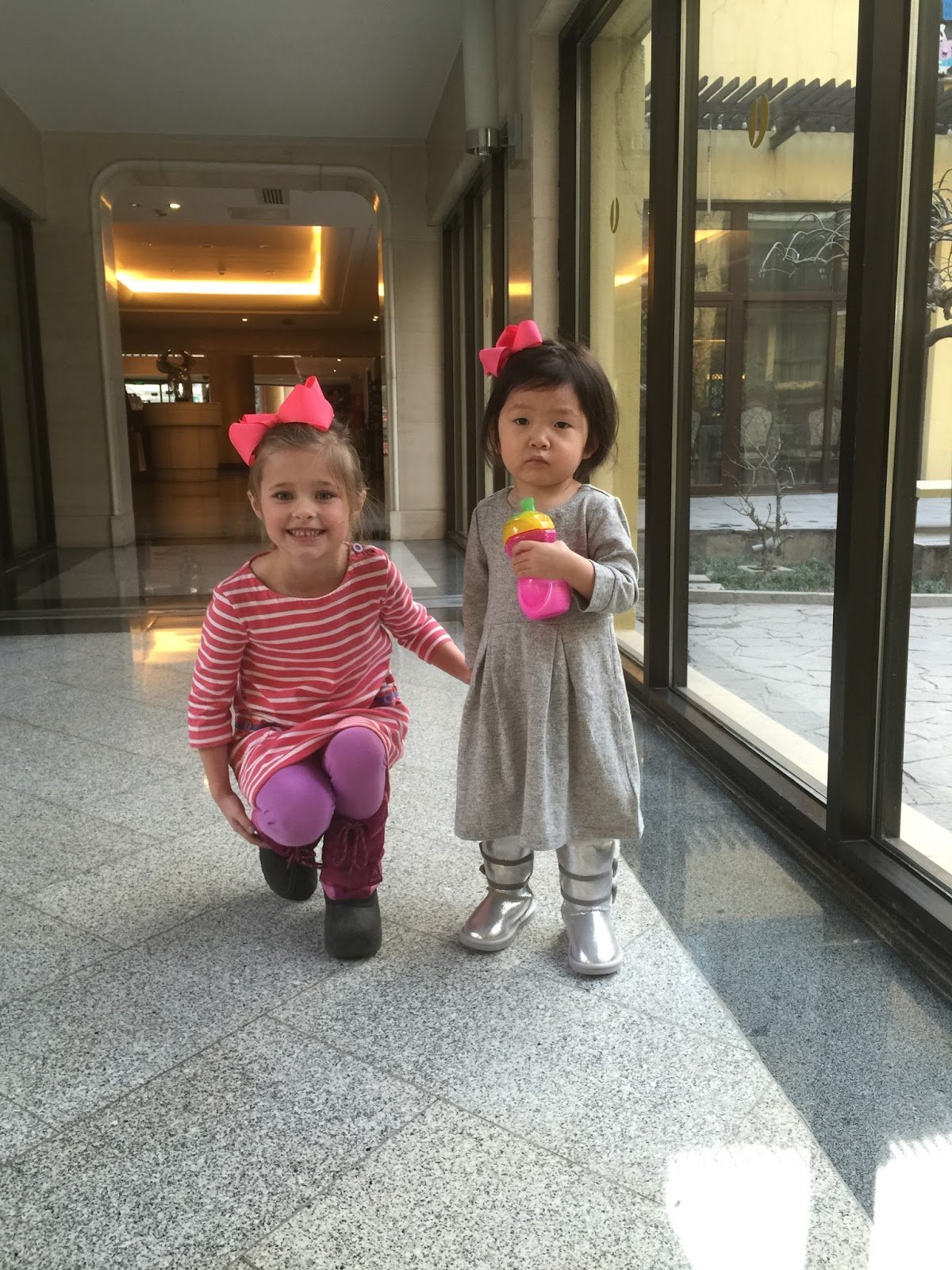 Today, we started Day 10 by going to breakfast and doing our new usual routine.  Here are the girls heading to get their coats after breakfast.

After this, we loaded up with our driver (that the adoption agency set up for us this week) and headed to see the Terracotta Warriors.  It was about an hour drive to see the museum and right as we were about to arrive…we got into a little car accident.  A motorcyclist ran right into the side of our van.  Thankfully, everyone was okay (although the poor motorcyclist had a pretty big gash on his head and my kids kept saying “oh my gosh, his face is bleeding”…which it was).  Our driver and the motorcyclist started yelling at each other (in Chinese, of course, but yelling…sounds like yelling no matter which language you speak) about whose fault it was (so we were told later) and our driver said he couldn’t move our van, so the five of us were told to get out right in the middle of the intersection (and if you’ve ever seen a Chinese intersection…you know how terrifying they are when you’re in a car much less walking through one!).

Needless to say, all is well after the excitement.  Thank you Lord. 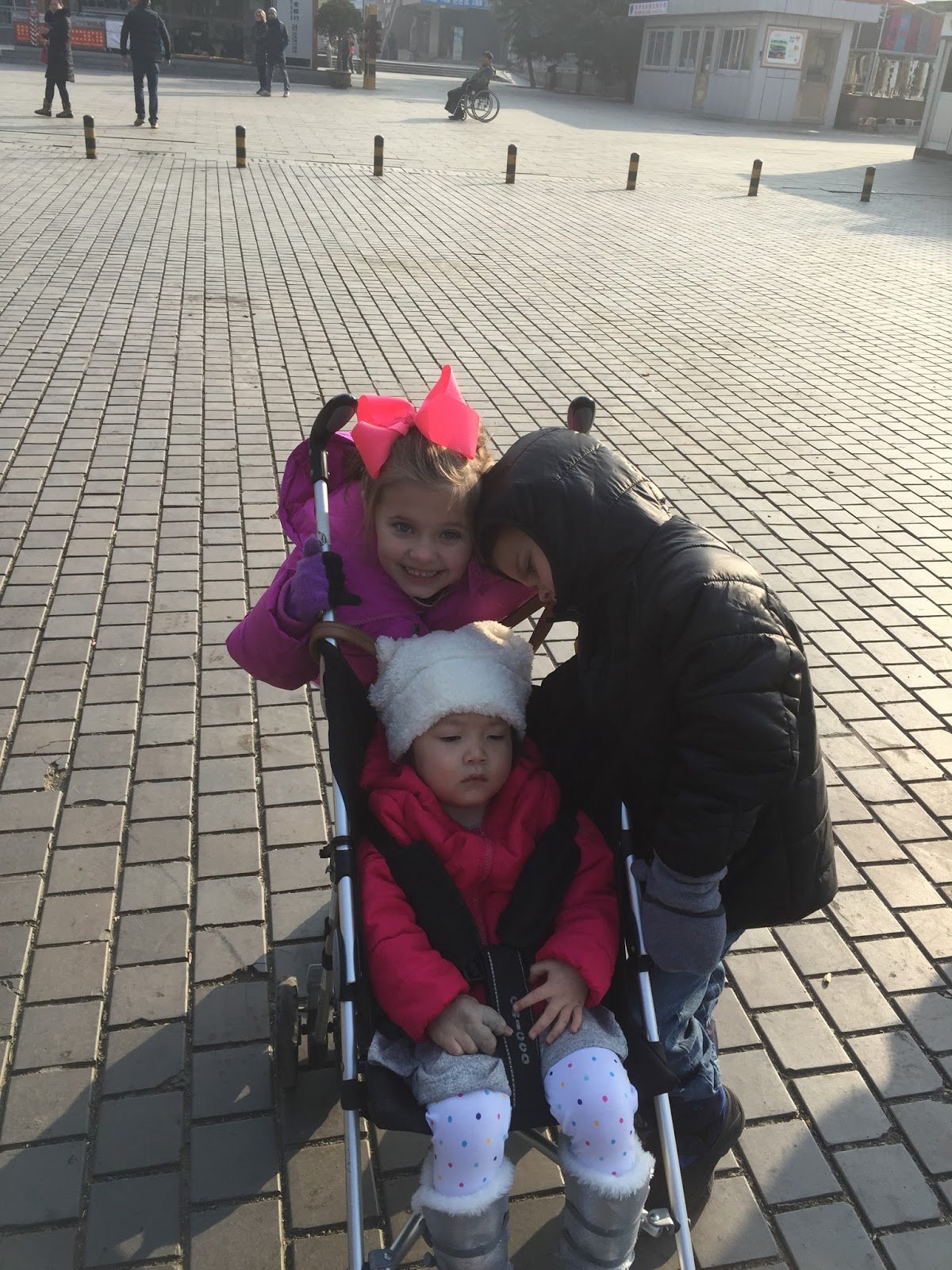 My three as we waited in line for our tickets to get into the museum.

Now listen, I had no idea what the Terracotta Warrior Museum would be like but I can honestly say, it was AMAZING.  Hands-down, this was my kids’ favorite site seeing day by far! 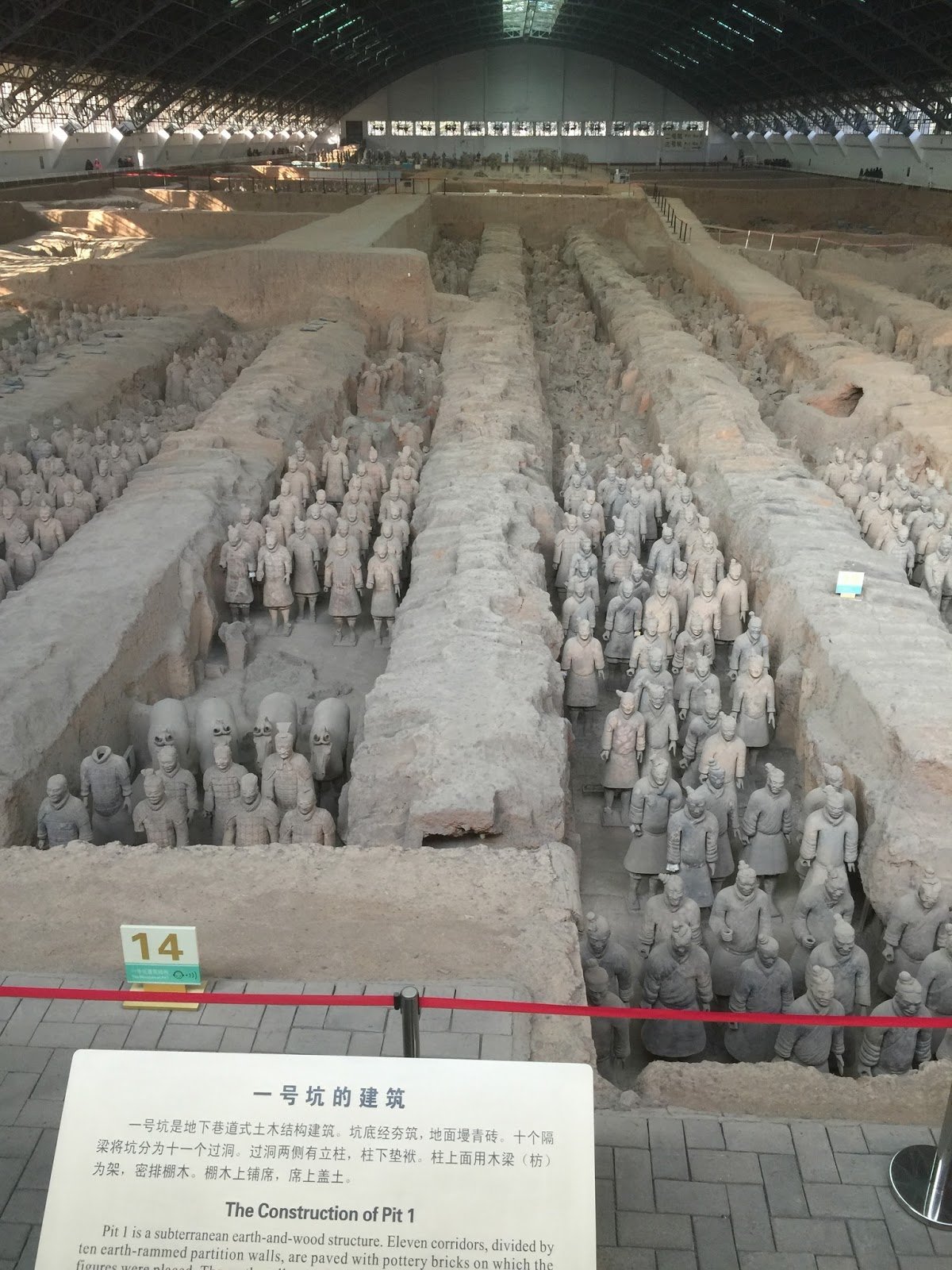 This was just one of the “pits” where these warriors were uncovered (there are three total).  Such an amazing site! 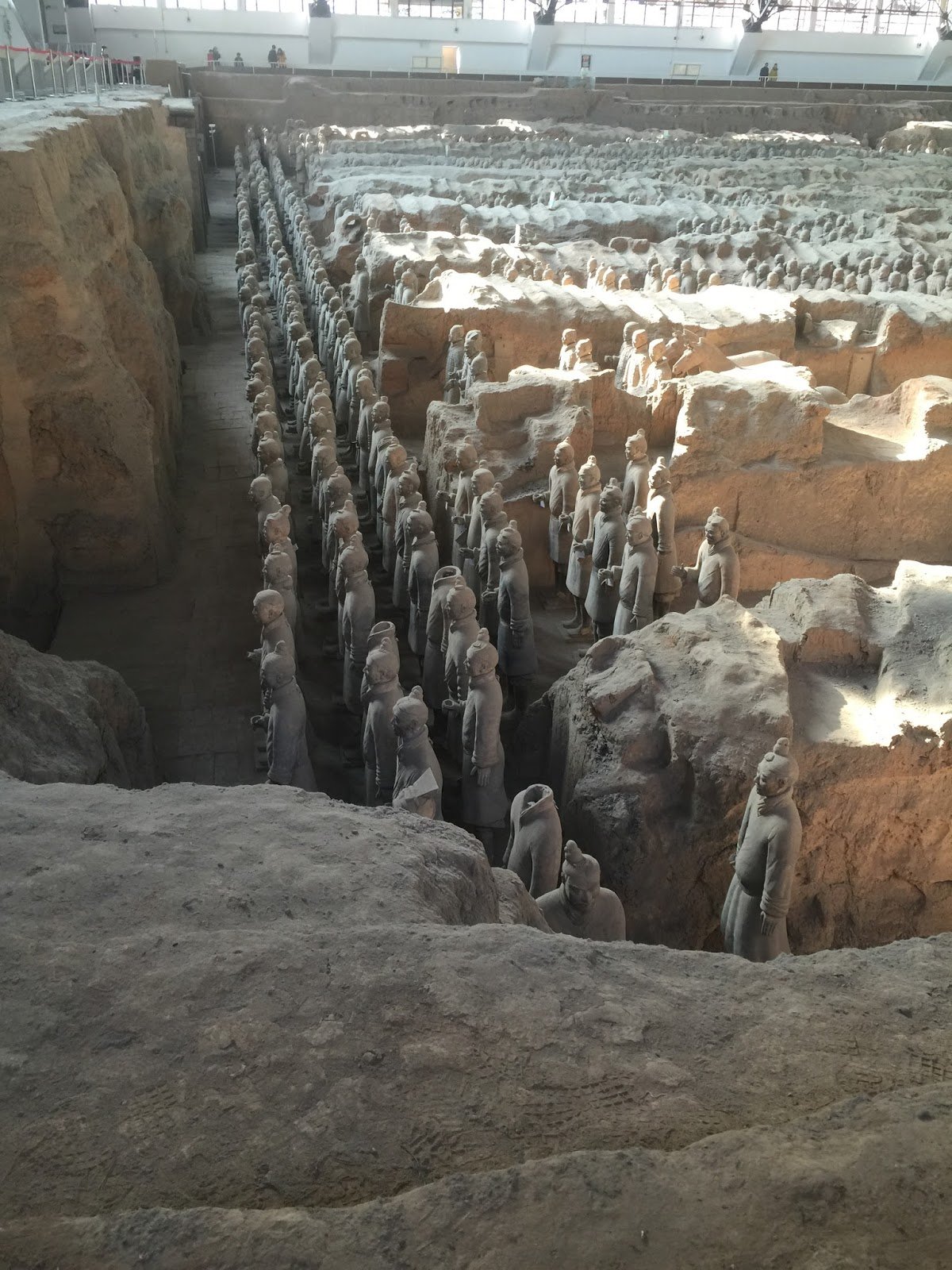 My kids took in every little bit of information about this place.

This is a panoramic picture of Pit 2.  We really, really loved it here.
So, we arrived back at the hotel around 2ish this afternoon.  Ashby went straight down for a nap and Kensington and Smith are watching a movie while I blog.   Andrew is out getting us coffee :).
Right now, I’ve been told we’re in the “honeymoon” stage of adoption.  You know…everything is going really well and it seems like a breeze.  Who knows how long this will last, so I’m going to enjoy every minute and not worry about when it’s over.  When it’s over, it’s over and I’m ready for that too (but it would be really nice if it weren’t over until after our loooooong flight back to Dallas!).
Tonight, we’ll eat dinner and head out for ice cream and then tomorrow, we’re going to visit Ashby’s orphanage.  Ashby is not going to go inside.  Andrew and I will take turns visiting while the other stays in the van with Ashby.  We do not want to stir up any emotions in Ashby that might upset her or set her back.  I’m sure I’ll have a lot to say about her orphanage tomorrow.
And one last thing…many of you have asked how old Ashby is.  She was found on June 19, 2012 and is estimated to have been 10 days old, so her birthday is June 9, 2012.  Our little peanut is 2 and a half :).
XO
Click here to see Day 11. We love our Dallas Cowboys Cheerleader