Yesterday was such a crazy and unbelievable day.  We waited around the hotel until 3:30 to meet Ashby.  I stayed busy by reading and watching Breaking Bad but the kids…they were just so anxious to meet her.
We left the hotel at 3:30 and drove to the Government Affairs Office to meet her.  We arrived on the 20th floor of the building and could hear a baby crying.  As soon as we walked into the office, they said she had just been in there crying but the lady from the orphanage had taken her back downstairs through another elevator to get her to calm down.  So we waited.  Some more.  I had the same feeling I had on both days when I had my c-sections…that excitement, nervousness, anxiousness, flat out just ready to get it over-ness. 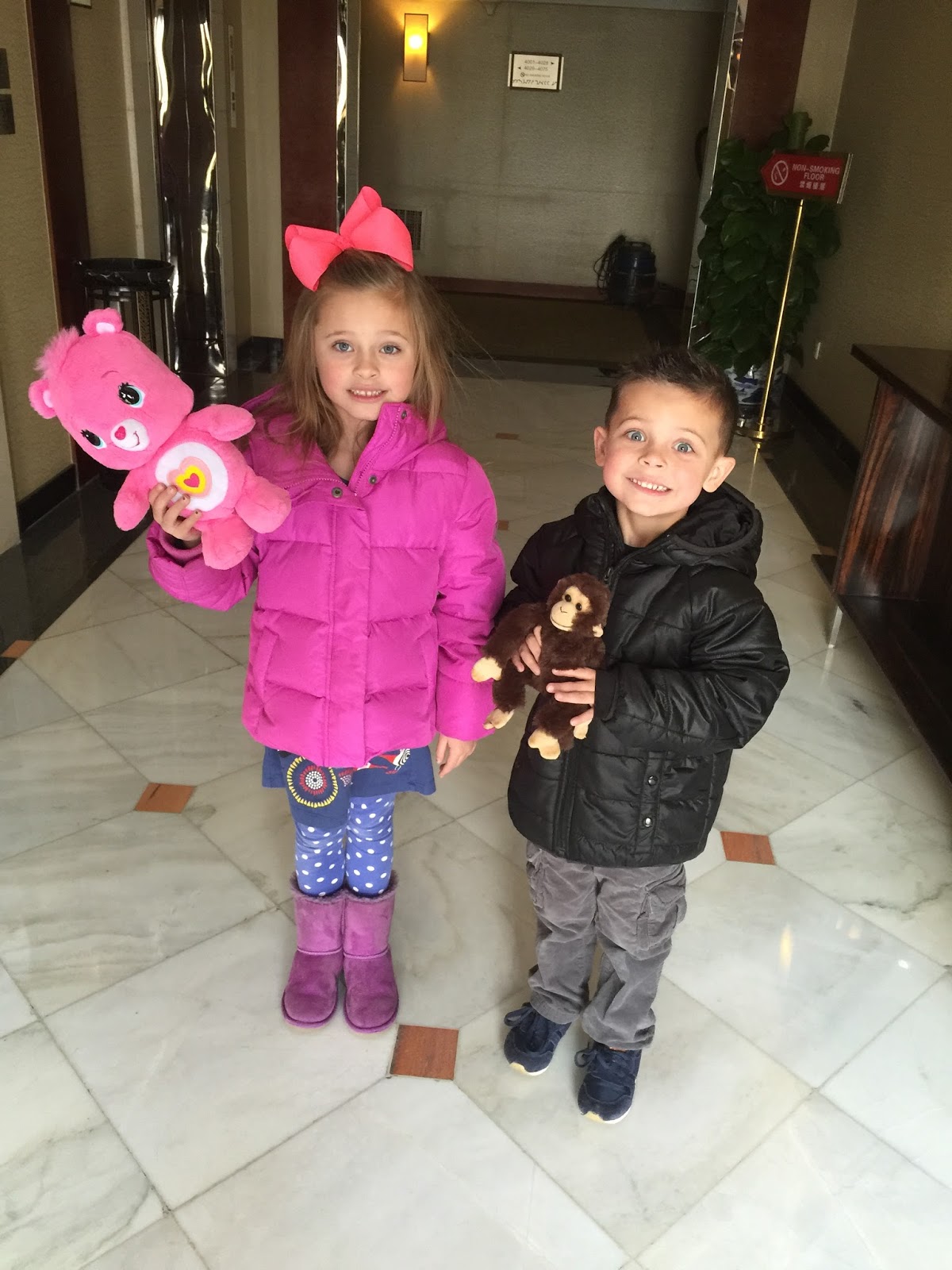 Here we are leaving the hotel!  The kids each brought her a big sister/big brother gift.  They were just so excited :). 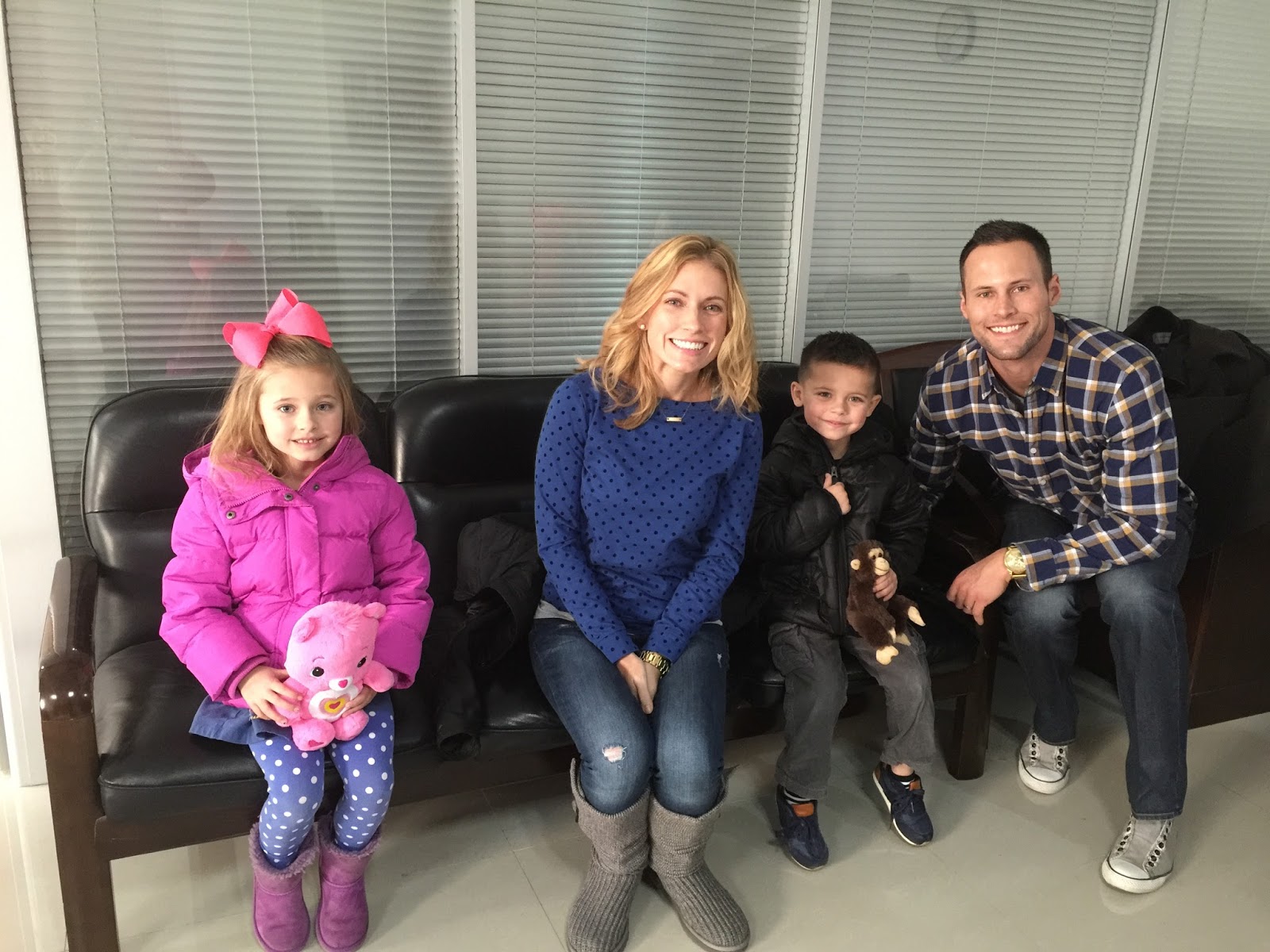 Waiting in the Government Affairs Office for the lady to bring back our crying baby. 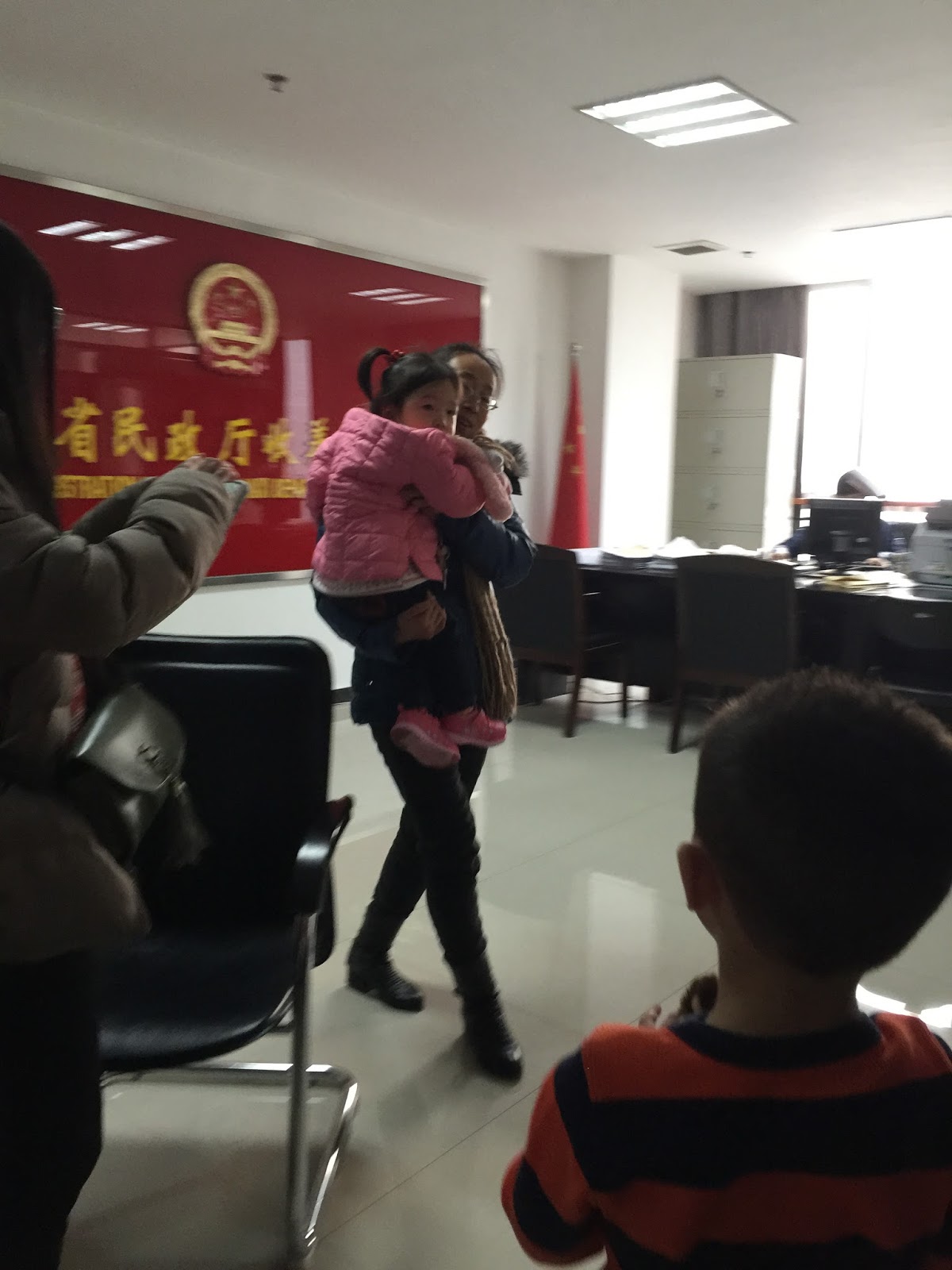 Here she is!!!  She was calm until she realized she was being handed over to strangers and then she screamed her head off. 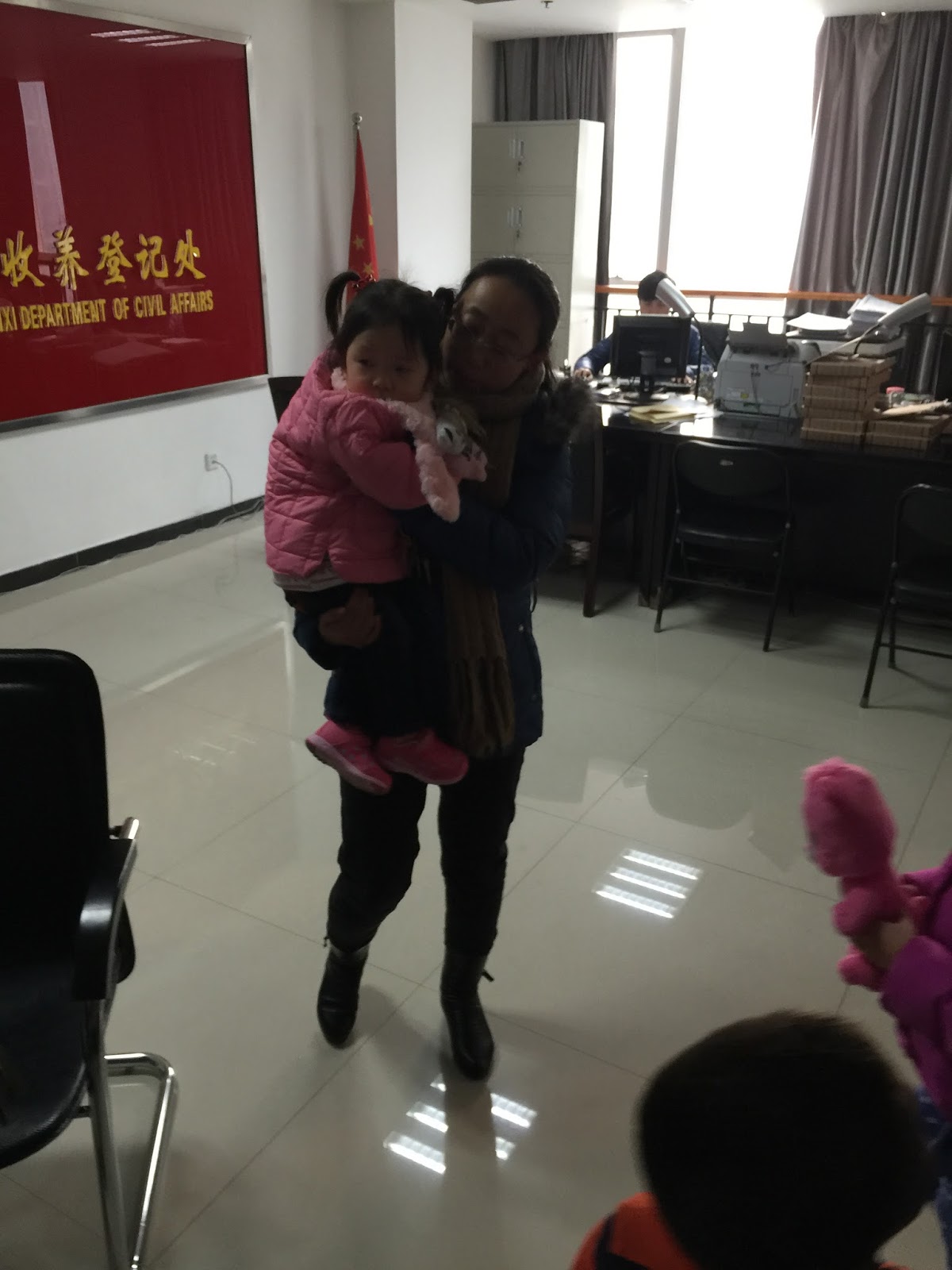 Our answered prayer.
At this point, she was handed to me and she cried and cried and cried.  We all talked to her but she didn’t understand and she just cried.  I was doing okay and keeping my emotions together until I realized she was holding a little book of pictures we had sent her six months ago of our family.  They had put them in a little album for her and apparently, they had been showing her our faces and telling her we were her new family…insert my ugly cry here.  That just makes me happy and breaks my heart all at the same time.  While we waited to be united as a family of four looking at her picture…she waited by herself looking at our pictures.
Andrew took Ashby out in the hallway while they ushered me to a desk and started explaining everything about my child while I quickly jotted down notes on a piece of paper.  When she sleeps, what she eats, what she drinks, that she likes to potty in the toilet (heck yeah!), she has no allergies, and on and on and on.  I felt like I was babysitting and the parents were telling me what to do with their child while they were out for the night.  According to this lady from the orphanage, she liked everything and was so quiet and easy going.  Under the “dislikes” column was only one thing…she dislikes meeting new people.  Awesome.  Welcome to the family ;). 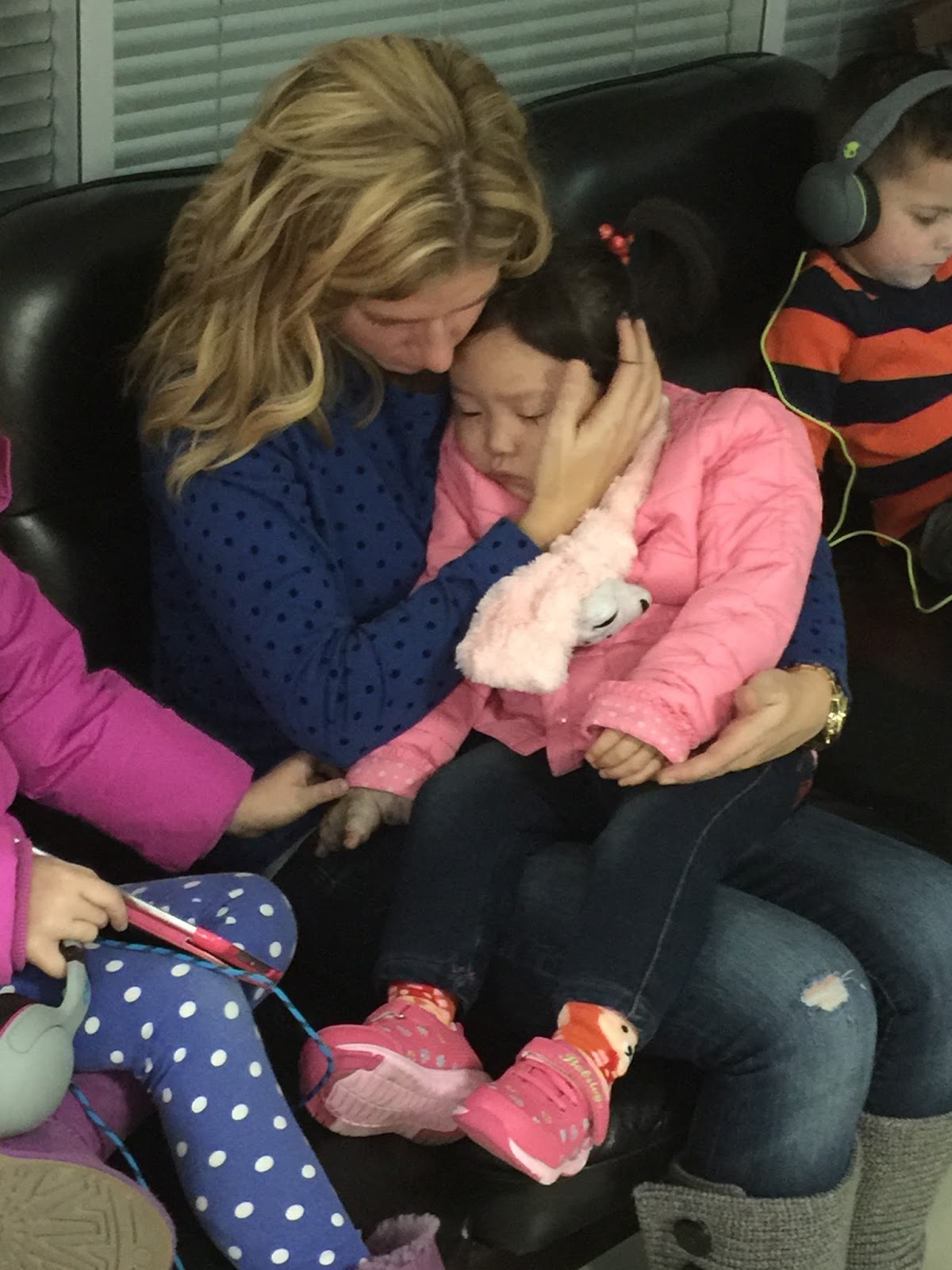 After I went over my babysitter assignment from the orphanage worker, Andrew brought her back in all nice and happy and handed her off to me while he completed paperwork.  She relaxed into my arms and as you can see…her big sister held her hand and she rested. 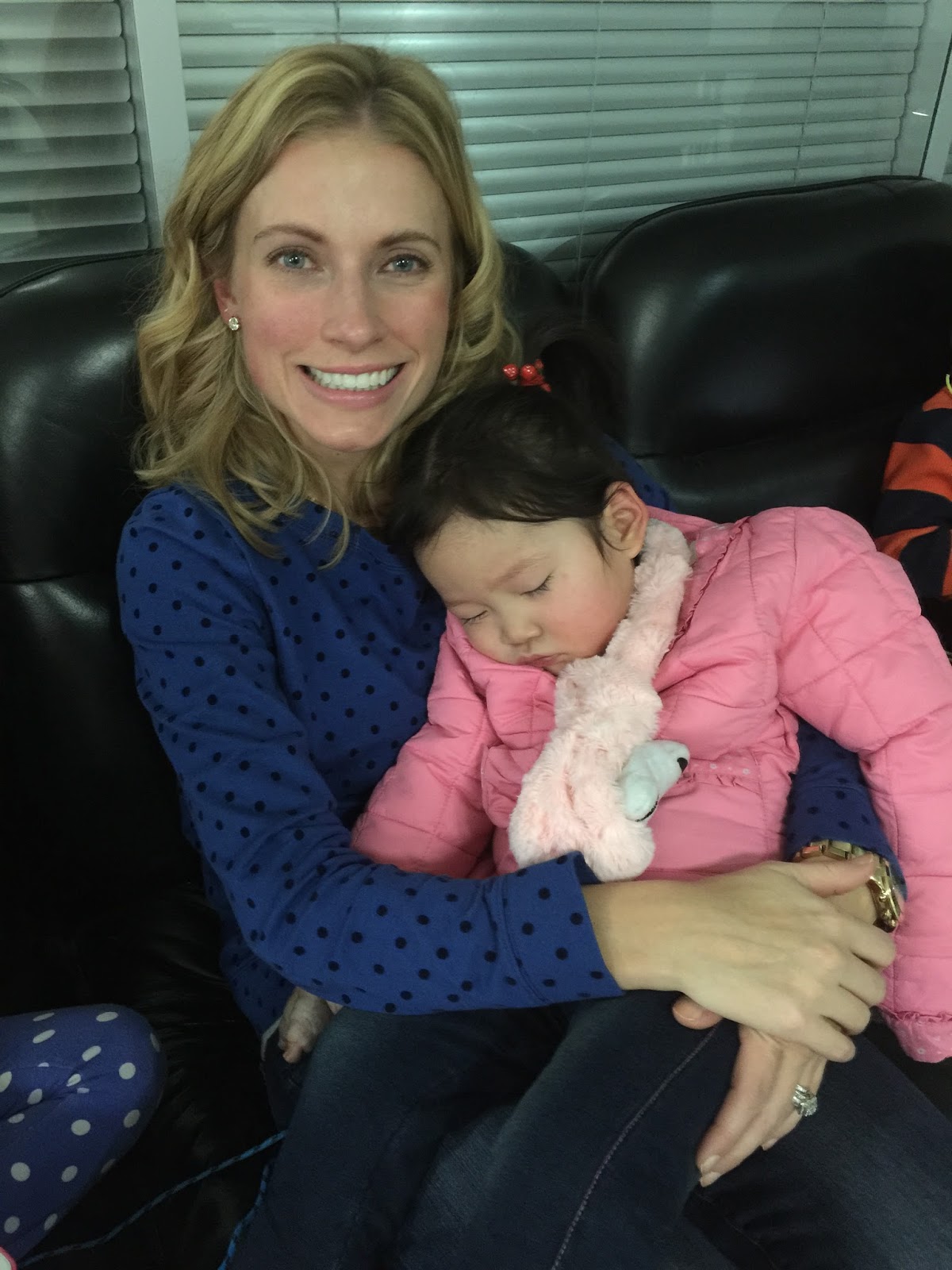 She slept.
Only one other thing really choked me up…the orphanage had dressed her in brand new clothes.  She was wearing brand new shoes, a new coat, a little scarf…she was all decked out.  It just kind of tore me up inside that they were thoughtful enough to present her to us like this.  I will keep these clothes forever. 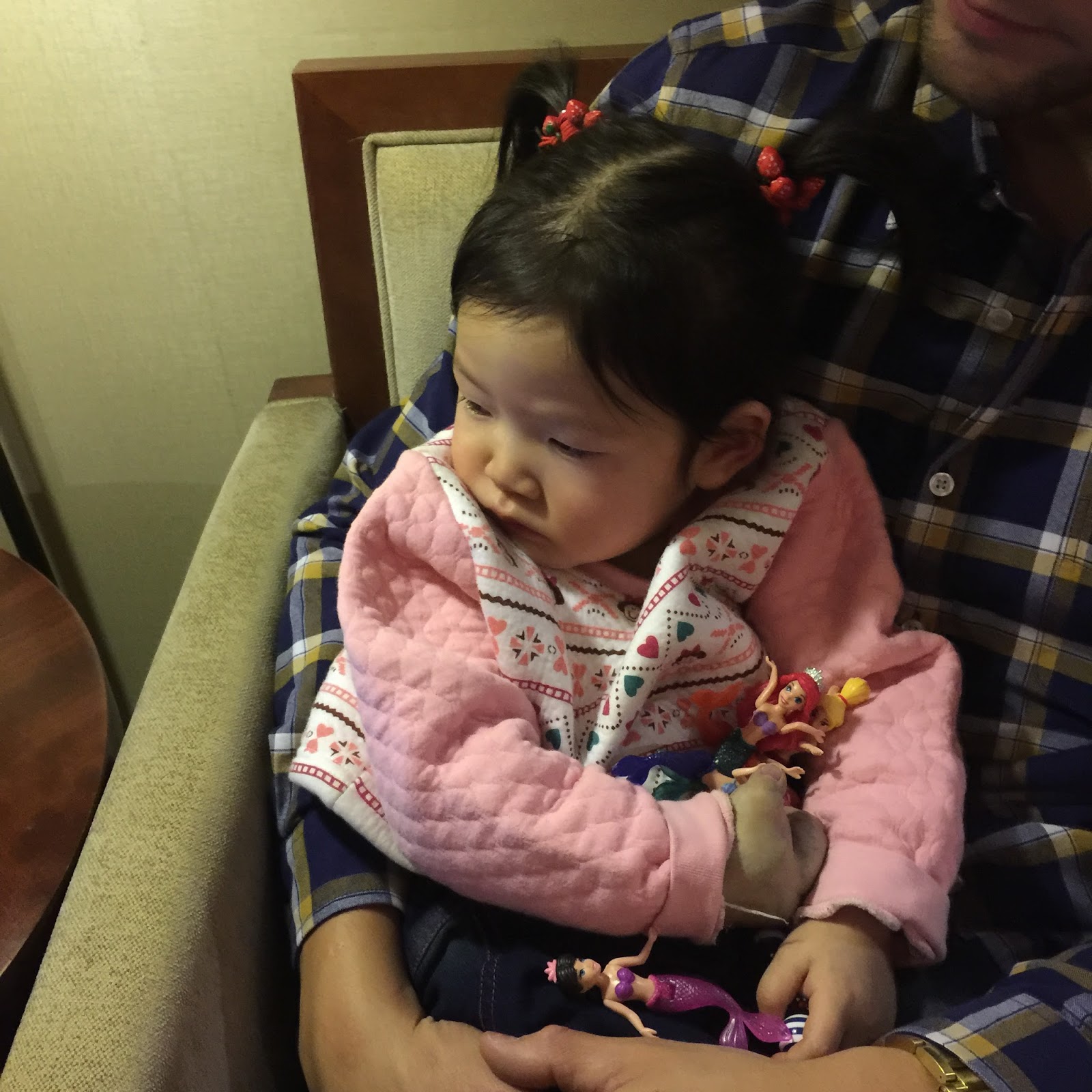 After we finished our paperwork, we headed back to the hotel as a family of five.  Ashby quickly realized that having a big sister with Disney princesses is a pretty good gig. 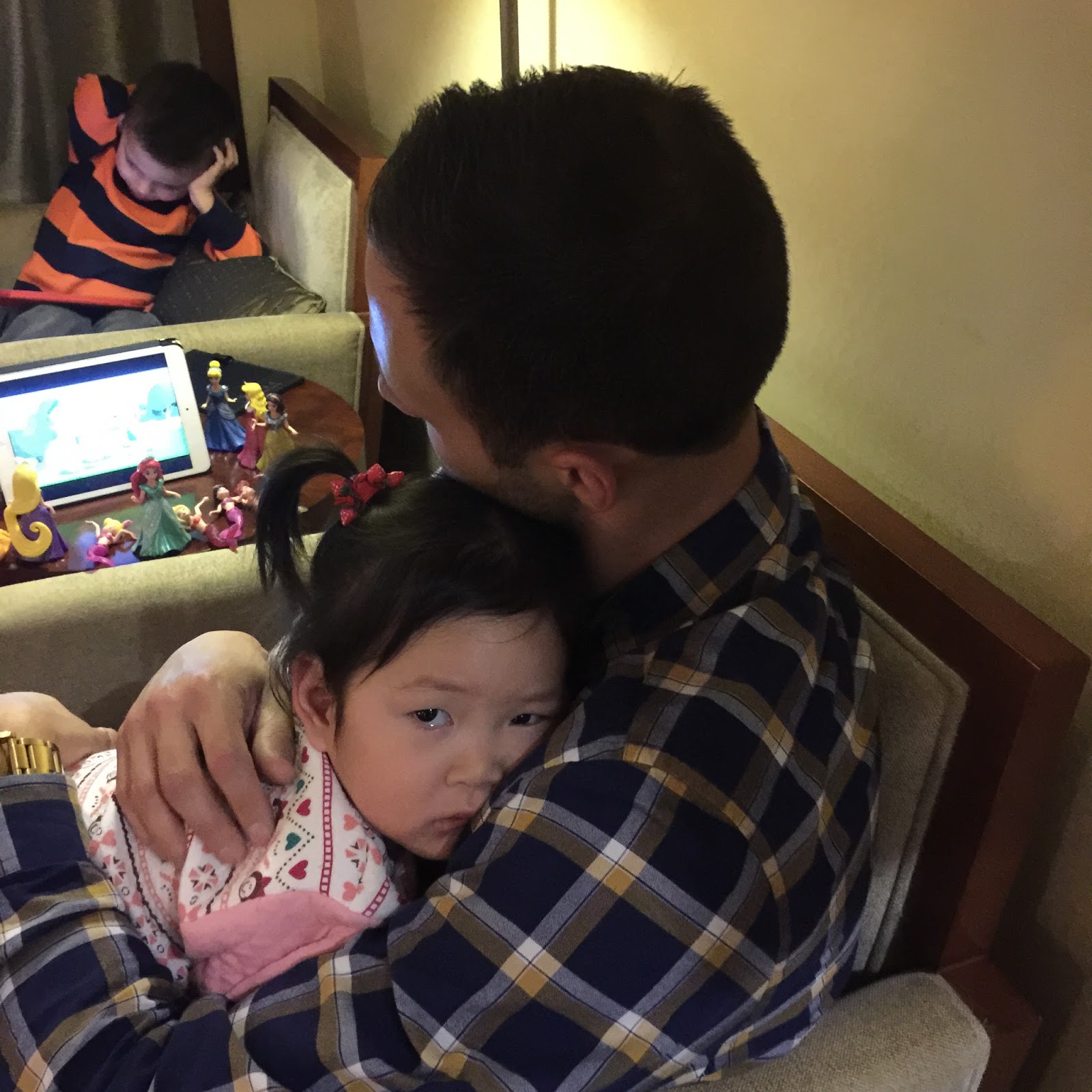 She snuggled a lot with her daddy :). 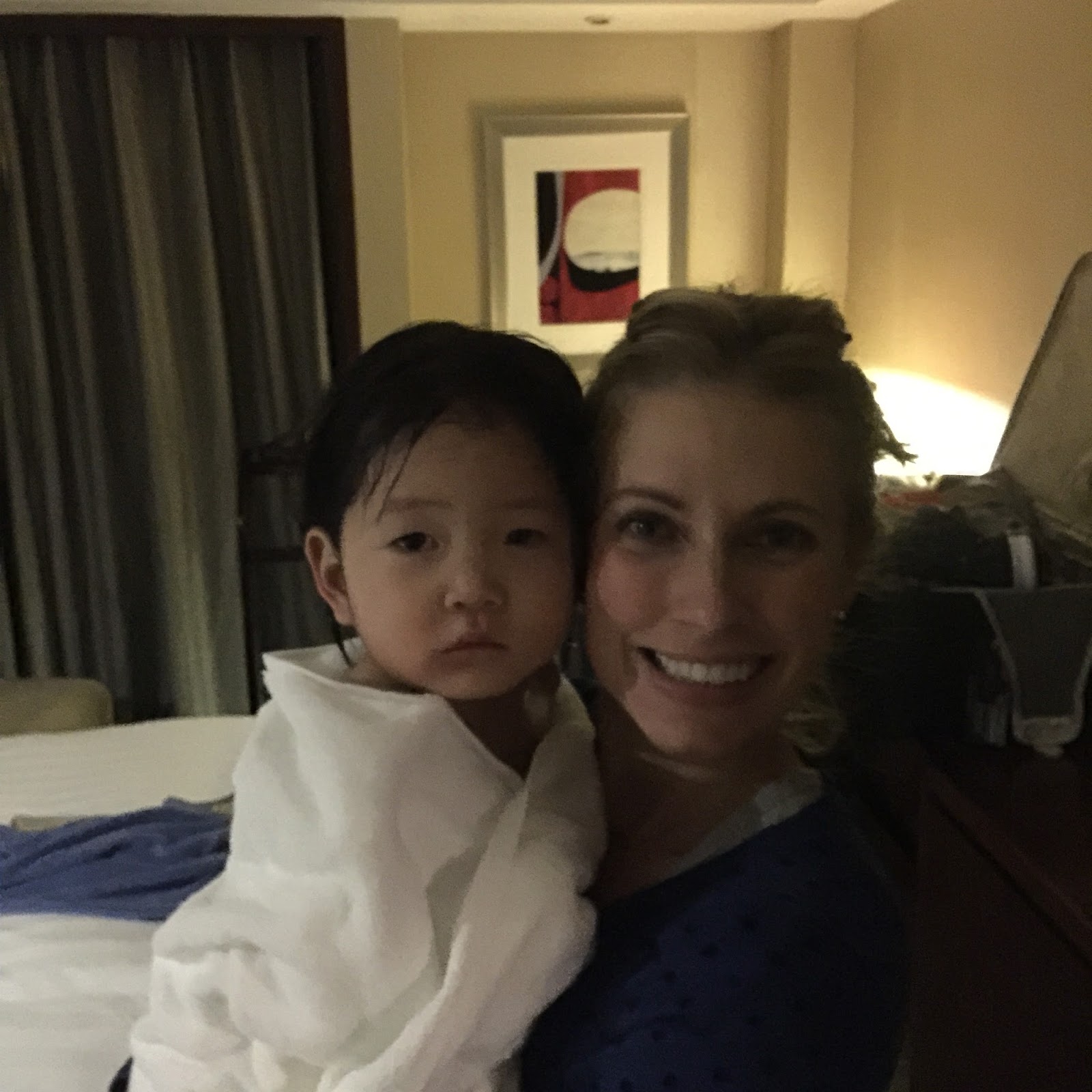 After dinner (room service), Ashby got her first Shull bath.  I love a clean baby. 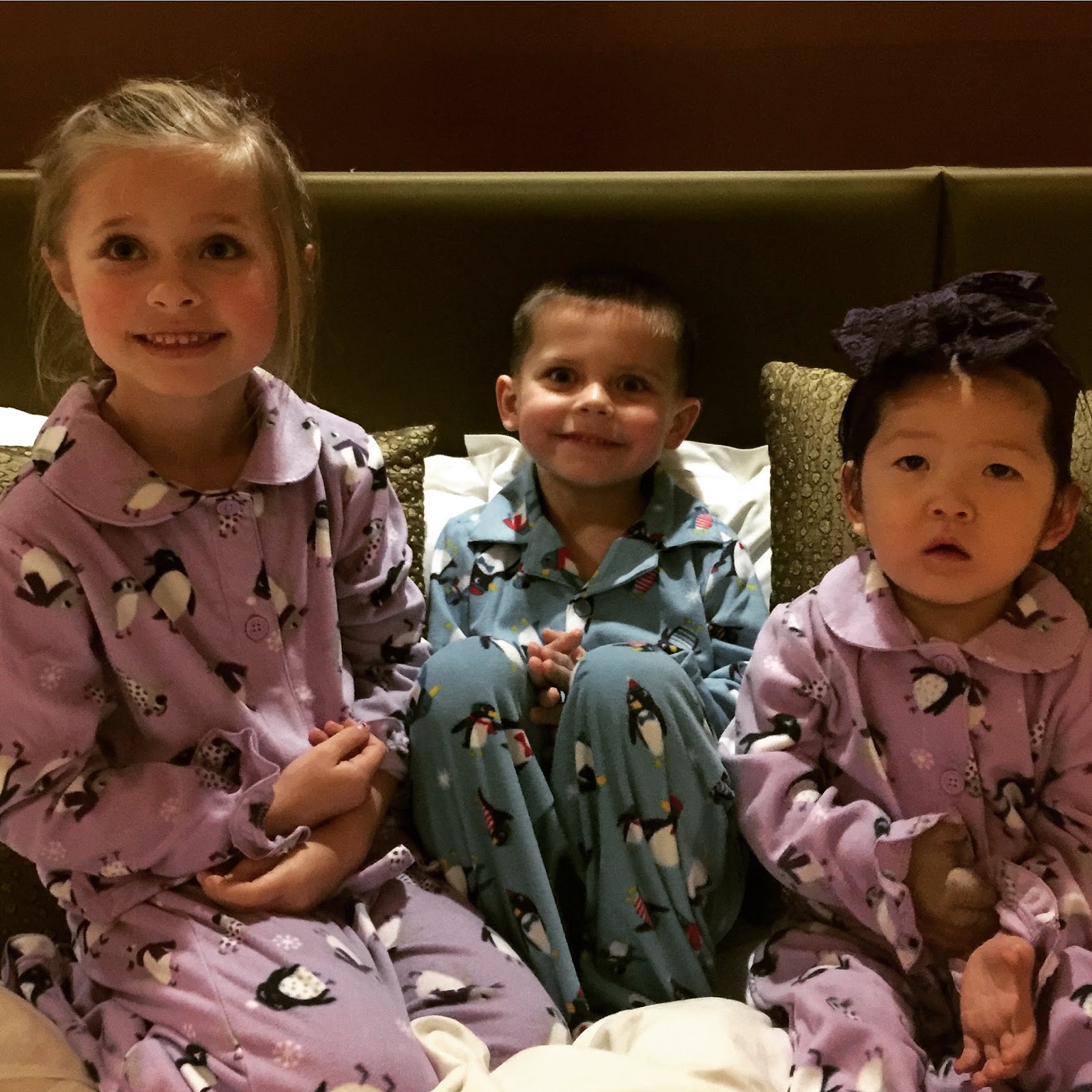 And then the kiddos put on their matching pajamas.  Kensington and Smith were so excited about this! 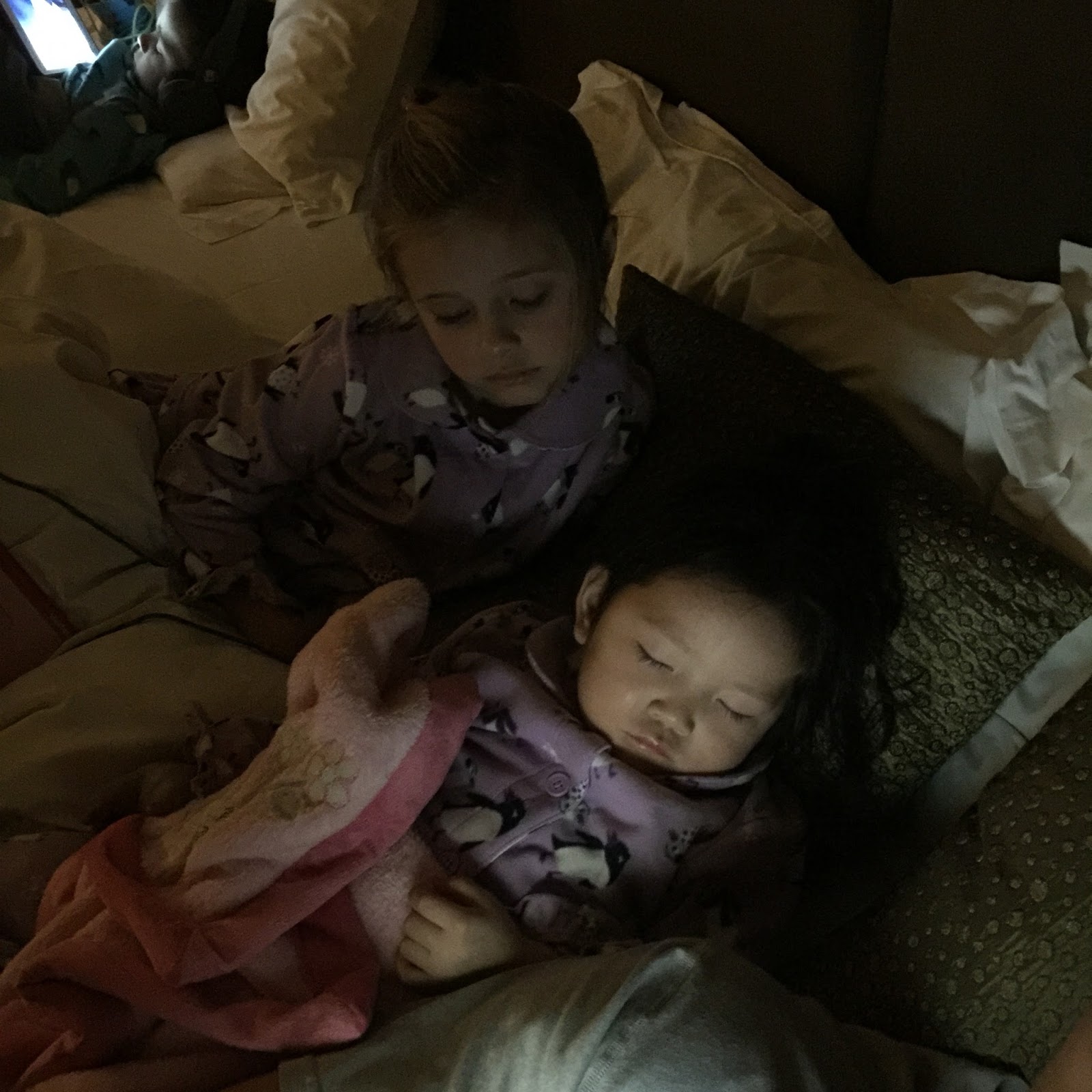 Everyone got all snugly in bed and watched a little Bubble Guppies before going to sleep.  Kensington is absolutely smitten. 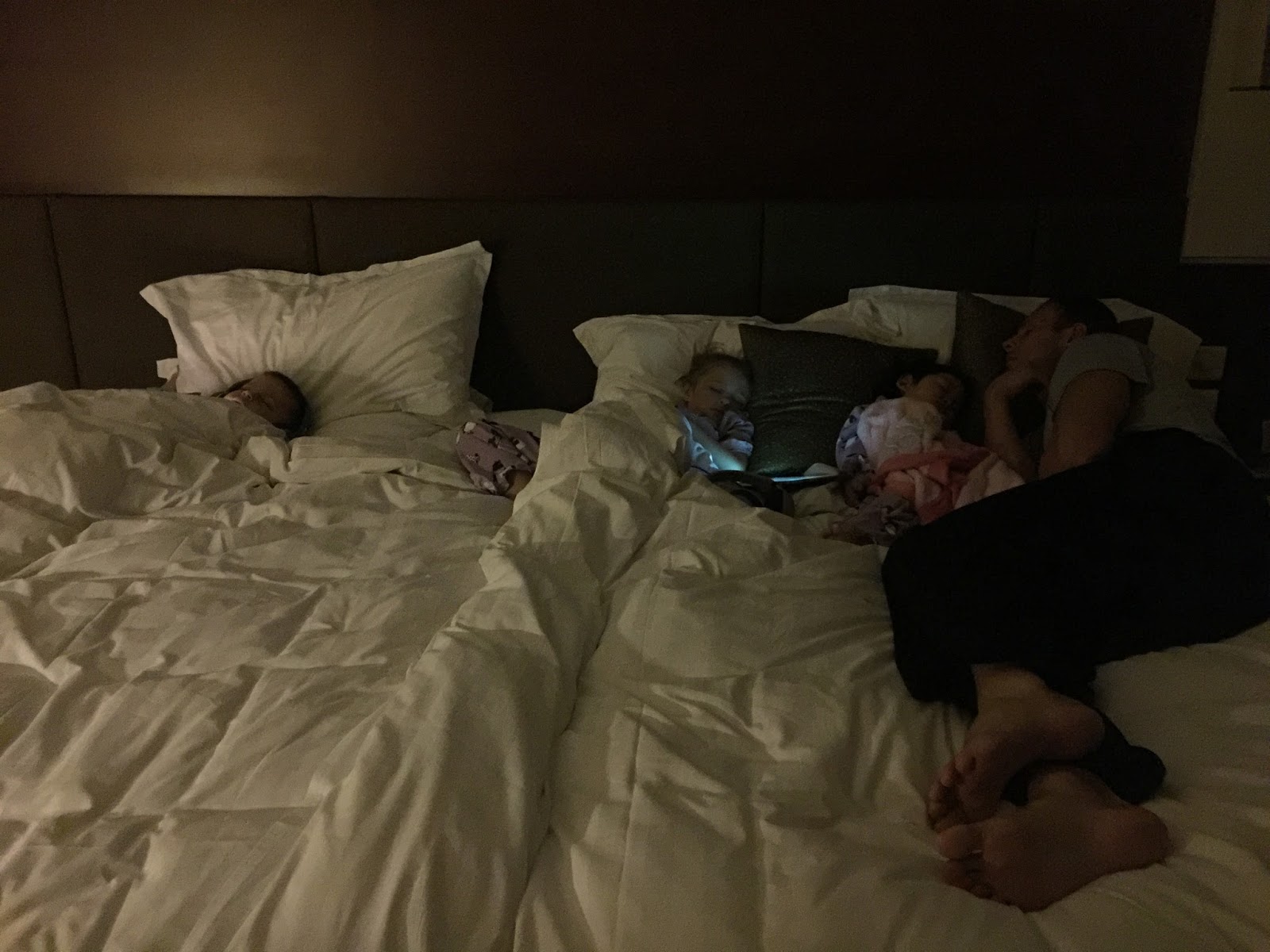 After I got out of the shower, I saw this…four sleeping Shulls.  I sent this pic to my girlfriends and they all laughed about the size of this bed…the hotel gave us a room with two queen sized beds pushed together…I love how Smith is taking up one and the three of them are sharing another :). 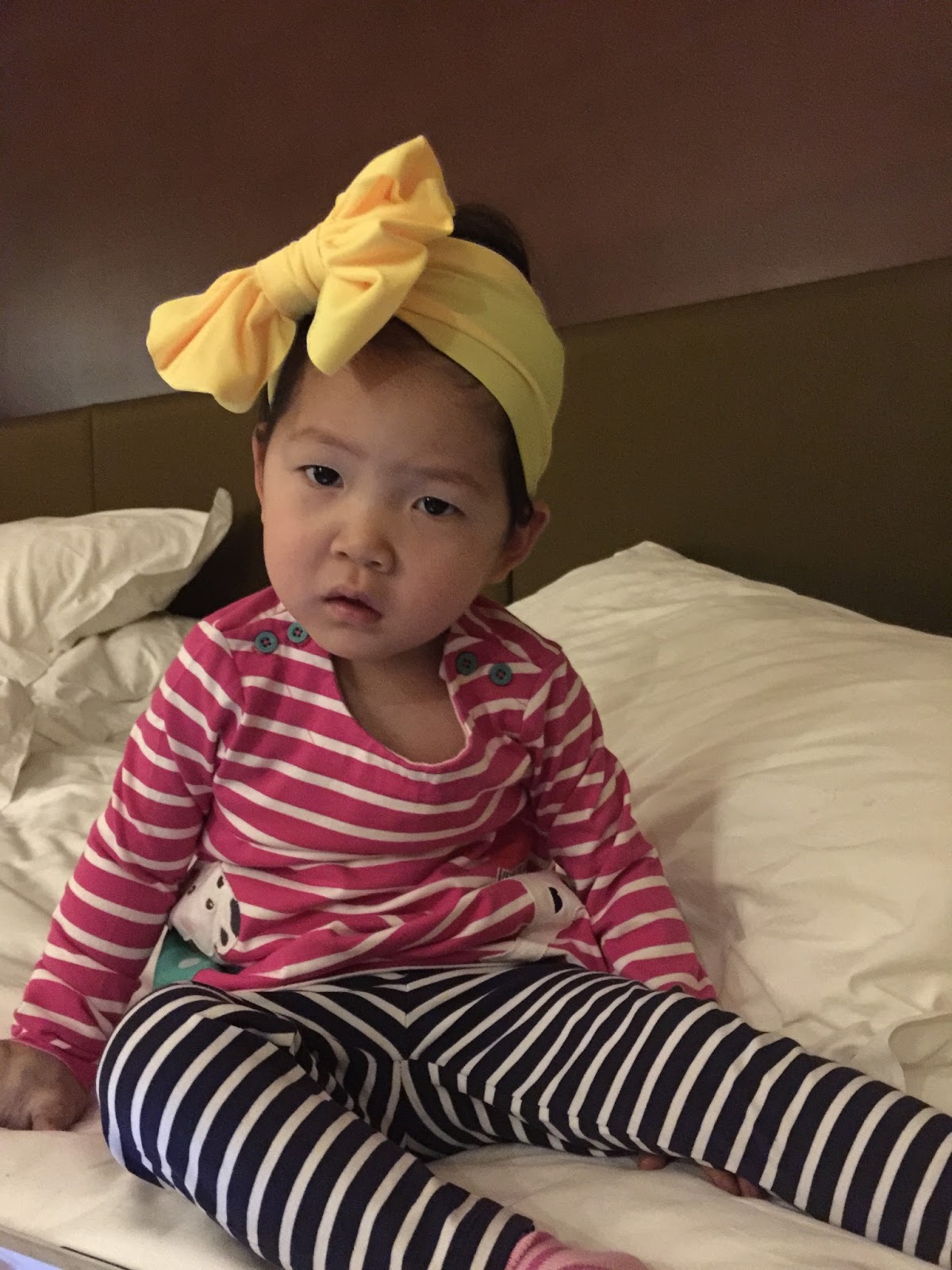 Ashby slept from 8:30 until we woke her up at 7:00 for our appointment back at the Government Affairs Office. 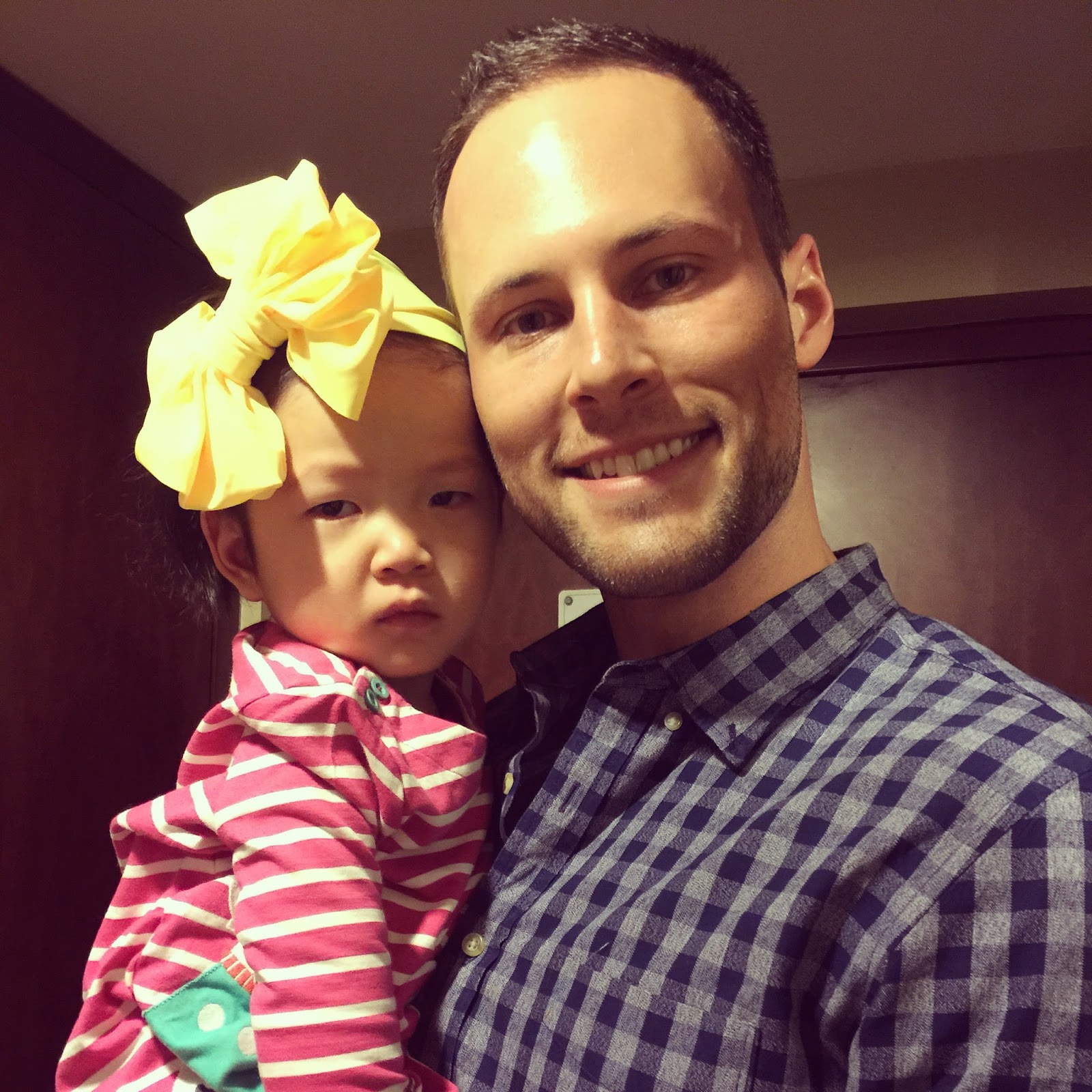 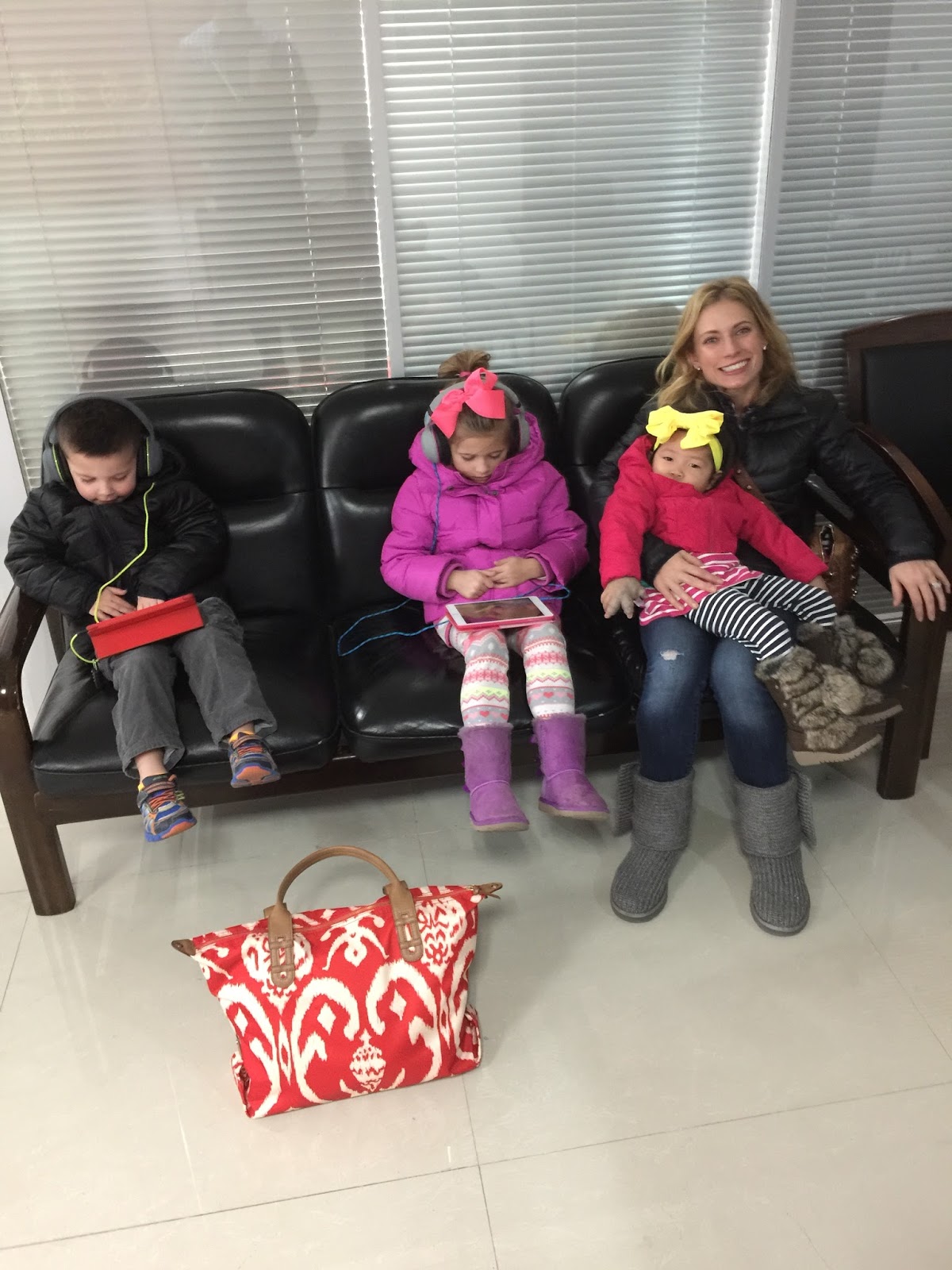 And we’re back signing more paperwork at the Government Affairs Office.  On this day, we became Ashby London’s legal guardians.  After this, we drove over to the police station and applied for her Chinese passport (and later we’ll get her US Visa to bring her back to the States). 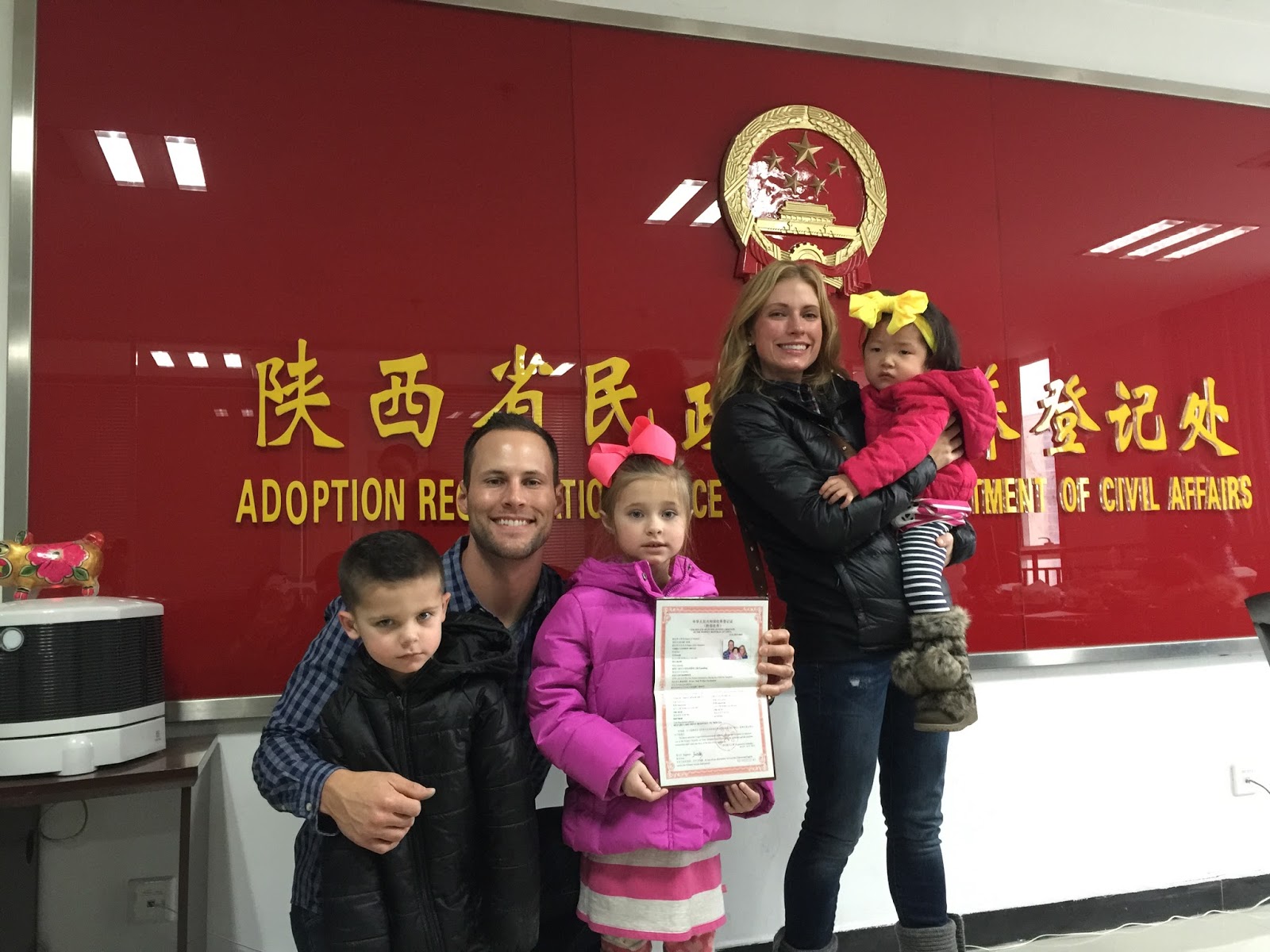 Leaving the Government Affairs Office with our guardianship certificate.  A family of five.
Whew!  Now, it’s 1:30 pm and we’re having some downtime in the hotel.  Ashby is napping, I’m blogging, and the other 3 are playing and/or watching a movie.  It’s nice to have some downtime.
We have survived our first 20ish hours.  Ashby is warming up to us.  She is really cuddly with Andrew and me, she loves Kensington’s things and she’s super curious of Smith.  She has been responding to her name and if we say things like “where is Smith?”, she’ll make eye contact with him.  I would love to  come home now but unfortunately, it takes about 10 days to get her US Visa…so we have time on our hands.
Speaking of hands…as you can see from the pictures, Ashby has some issues with her right hand.  Only children with “special needs” can be adopted out of China and her need is her hand.  We are thankful that even though it looks very painful, it does not seem to be causing her any pain.  We are also thankful for the specialists in the US that will be able to help us help her correct this problem.
Words cannot express how grateful we are by your love and enthusiasm over our growing family.  Adoption was planted in our hearts years ago and to see it coming together after so many years of praying is just amazing.
Next up…more China.
(And FYI: right about now, I would kill for some Tex-Mex.  Just saying…)
XOXO
Click here to see Days 9 & 10.
﻿ Life lately…is it Friday yet?

What I’ve been up to since I was born…