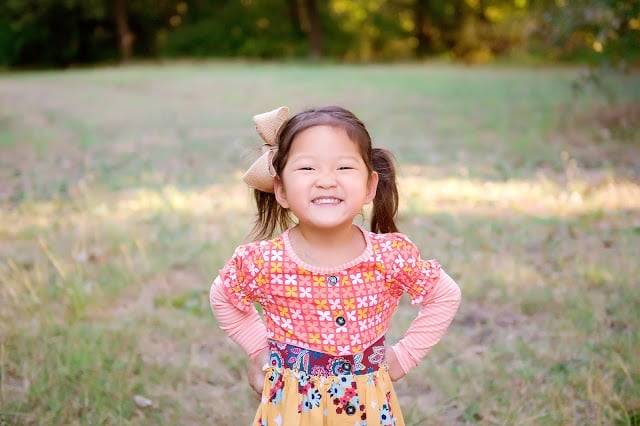 One year ago today, we got our Ashby.
We’ll never know for sure when Ashby’s birthday is, but we will know this date.  This is the date we became a family.
I wish I had the words to adequately describe what this last year has meant to our family…but I just don’t.  How do you put her into words?
People say over and over again how blessed she is to have us, but I can assure you…we are the blessed ones.
There were so many times over the last five years when we could have said no to adopting.  There were so many opportunities, road blocks and such that would have made it easy to just not adopt.  We had two healthy, happy kids already…we could have just said that was enough.  I am thankful beyond words that God continued to press adoption on our hearts even when we were weak and thinking it would be easier not to.  God continued to move us in this direction and I am so grateful that we followed.
The thing about Ashby is that she’s one in a million.  She’s one in a million to our family (precious, perfect, and meant for us)…but she was also one in approximately 150 million…orphaned.
There are so many other kids out there in this world with big personalities, big smiles, big potential, big love to share…they just need a home to do that in.  My prayer is that some of you will be moved to care for those who do not have a home…who do not have a family.  Whether you reach out to kids domestically or internationally, my prayer is that so many of you just step out on faith and do it.
Here’s a look back at this year with our Ashby London…
January 4, 2015 in Xi’an. China 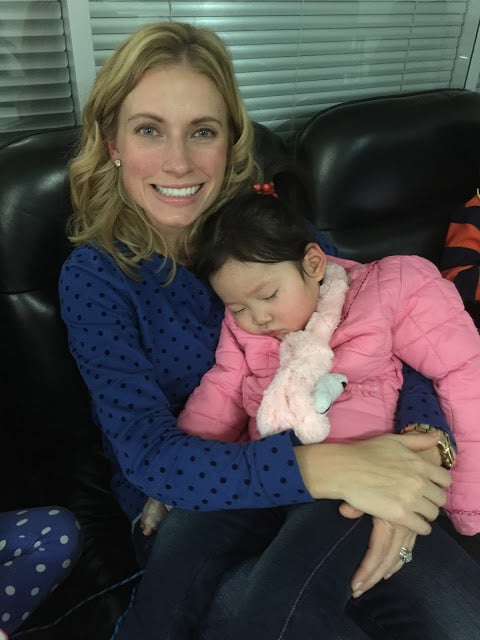 We started the adoption process on June 30, 2013, so to finally meet and hold my baby was one of the best moments I will ever have.
She was 2½ years old, scared, sad, unsure, crying, then really quiet.  She had no idea who we were or what was going to happen to her, but I knew as soon as I saw her face that she was ours.  She might have been full of questions, but I can honestly say that the kind of peace that can only come from the Lord washed over Andrew and me as we received her.  It was very much like when they handed me Kensington and Smith for the first time…they were crying and confused too…but I knew when I reached out for them that I never wanted to let go. 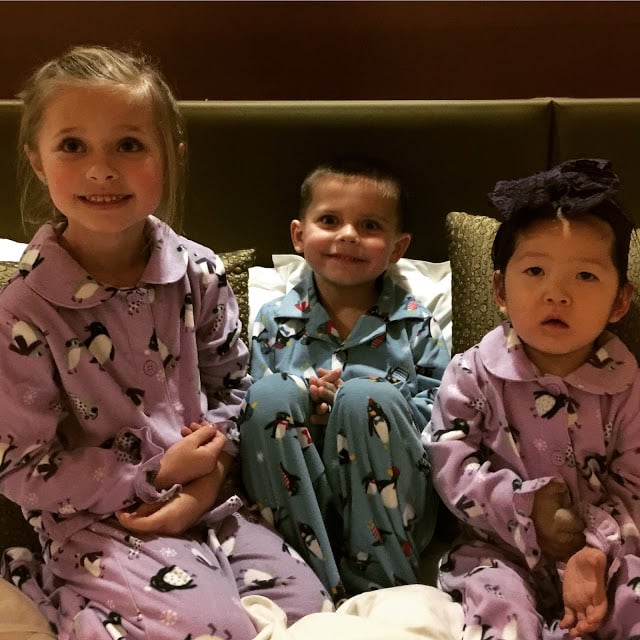 I remember so clearly bringing her back to the hotel room that first night.  She didn’t cry, she didn’t fuss…she was just quiet.  Her face was didn’t show any emotion…she was taking us in, but not letting us in. 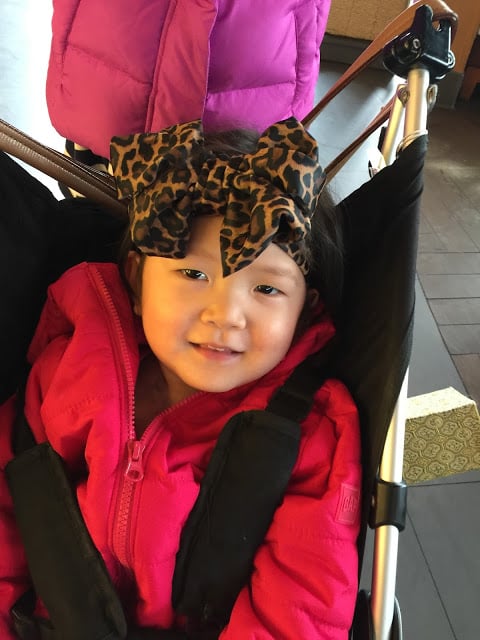 Over the next 10 days in China, she slowly started coming out of her shell.  We quickly realized that she had this big, beautiful smile that she had been hiding.  She had so much joy inside of her…and slowly but surely, she started sharing that joy with us… 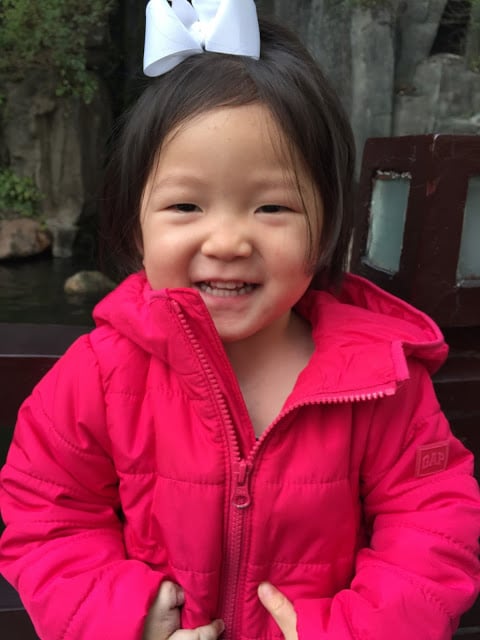 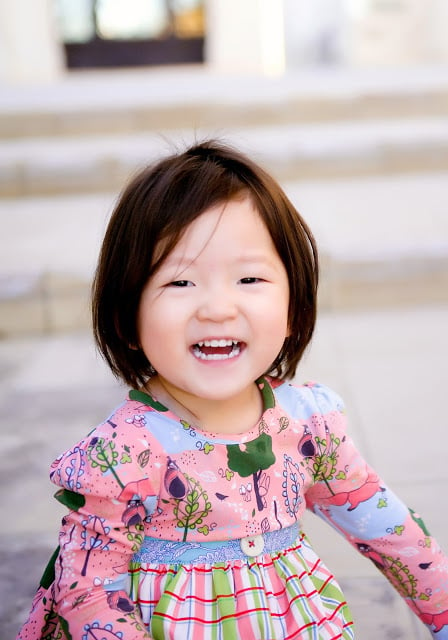 End of January 2015.  Home in the US.
On our one month anniversary with Ashby, I answered these questions about her (see that post here), and now, here are the answers one year later…
Language: So, her language isn’t up to her age yet, but it sure is getting close.  I can understand 100% of what she says, but you would probably wouldn’t.  She has a hard time with blends, so things like Smith, blanket, drink and such sound a little funny.  That being said, she can ask, say, and discuss complicated things.  She also says things now like “that’s so cool” and “you’re so funny” which just makes my day because that’s her interjecting her little opinion into things.  She’s a big talker and I love hearing her little voice around my house.
Physical Development: She’s growing like a weed!  She’s still on the small side for US standards, but will most likely always be.  According to Chinese standards, she’s in the middle, but with US standards, she’s around the 8 to 10% mark.  She is 3½ and still wears a 2T and her shoe size is only a six, so she’s small but very healthy.
Sleeping: She naps every day from about 12:30 to 2:45 and then sleeps 11ish hours a night.  Back in October, Kensington started sleeping with her every night…and well, that pretty much ruined her ;).  When the day comes that Kensington wants to sleep in her own bed again, Ashby will be crushed.  She loves sleeping with her sister.
Food: She still won’t a blueberry…but will eat everything else.  And…this girl looooooves Mexican food.  I’m talking, OBSESSED with it. God knew she needed to live in Texas.
Attachment: This has been one of the coolest things to watch evolve.  Ashby is attached to all of us.  She knows who her people are and is very much attached to us.  If you ask her to name her family, she’ll name the four of us and sometimes…the dog.
Poppy: Speaking of the dog, at first she was petrified of the dog.  Before moving in with us, she had never been in contact with an animal before.  Now though…she loves the dog.  Our dog basically lives under my bed most of the day, but when she comes out and wonders around, Ashby loves to give her attention.
Potty Training: She’s got it during the day!  At night though, she still wears a Pull-Up.
Going Out: When the big kids are at school and it’s just Ashby and me running around town, we have the best time!  I missed the first 2½ years with this girl, so I really try to soak in the moments with her now.
Playing: Ashby has always been good at playing with other kiddos, but now, she’s getting really good at independent play too.  While the big kids are at school, she’ll find babies, puppies, ponies, and such to play with during the day.  She loves to talk to them, love on them, push them around in her stroller or Cozy Coupe car.  She always, always, always has a purse on hand full of stuff (mostly things she’s stolen out of Kensington’s room) to get out and play with.  She loves Play-doh, coloring, puzzles and blocks too.
Other random things:
1. She loves pretending she’s a dog.  You’ll find her on all fours barking and grinning from ear to ear at any given moment during the day.
2. Ashby’s heart belongs to this guy right here… 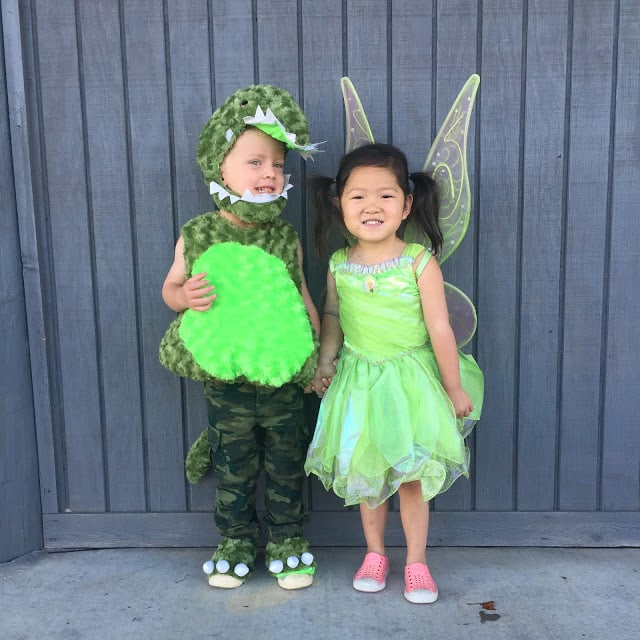 …one of the biggest lessons I learned this year was how important friends are for development.  This little three year old kid right here has had as much to do with Ashby’s development as her family.  I really don’t know where we would be right now if it weren’t for Bowen.  Bowen has taught Ashby so much, loved on her even when she wasn’t lovable and encouraged her.  We are all so thankful for sweet Bowen.
3. Ashby’s favorite show is Peppa Pig.
4. Ashby loves playing outside and especially riding her bike.
5. Ashby loves to help in the kitchen!  The minute I pull out the mixing bowls, she drags the stool over to the counter to watch and help.
6. Ashby is into anything girlie.  She loves purses, lip gloss, brushing her hair, lint rolling herself, trying on my shoes, wearing scarves…anything girlie.
7. As for Ashby’s Klippel-Trenaunay Sydrome, well, it’s going better than expected.  After the debulking surgery back in October, we have seen a big improvement which will (hopefully) keep blood clots and other aneurysms away.  Later this month, we meet (again) with her radiologist to discuss another procedure that they think is necessary, so that’s where we are.  This is something that will never be fixed or cured, just managed…and right now, we’re managing.
And for grins, here you go…12 months of Ashby… 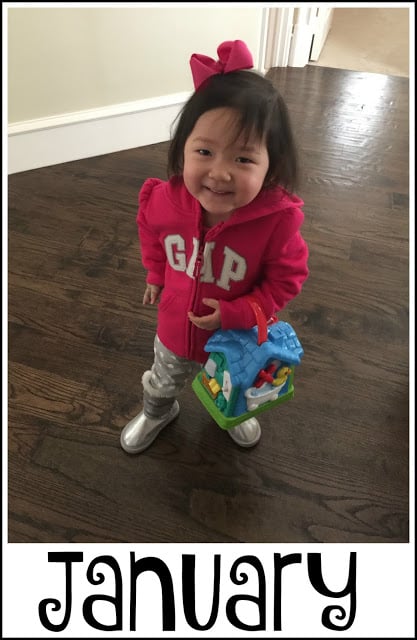 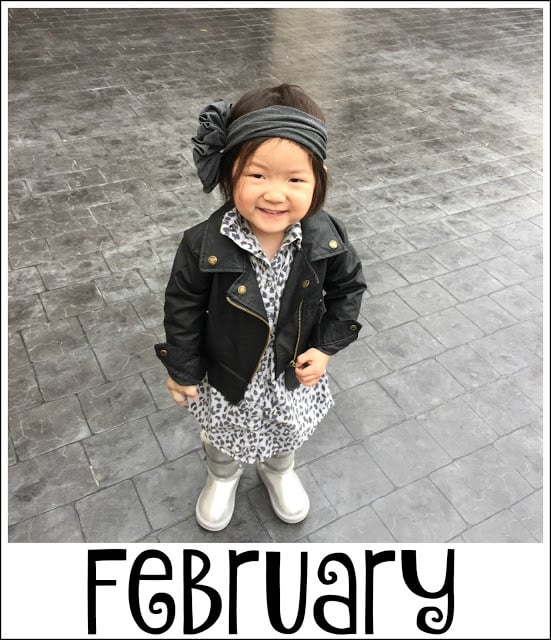 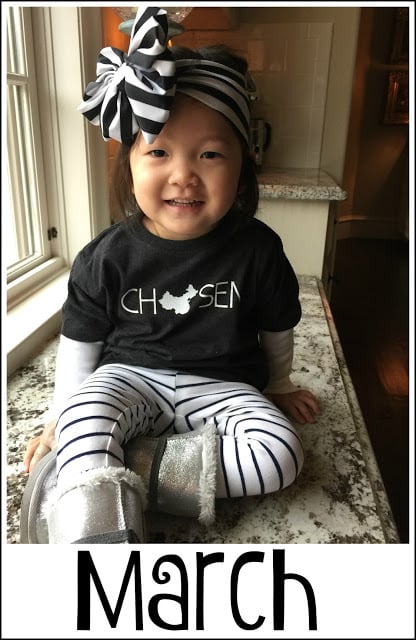 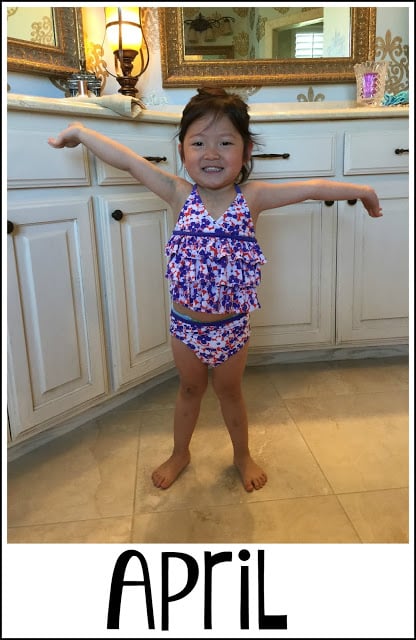 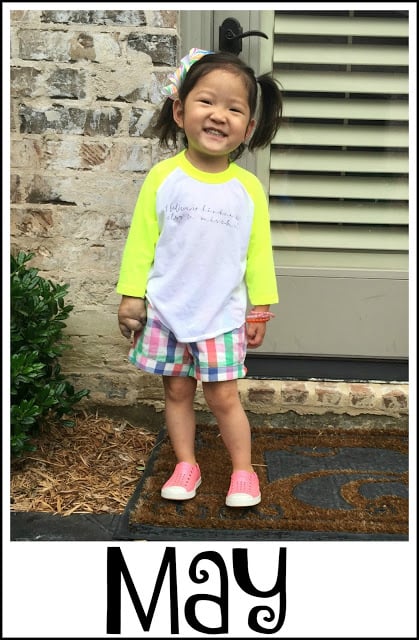 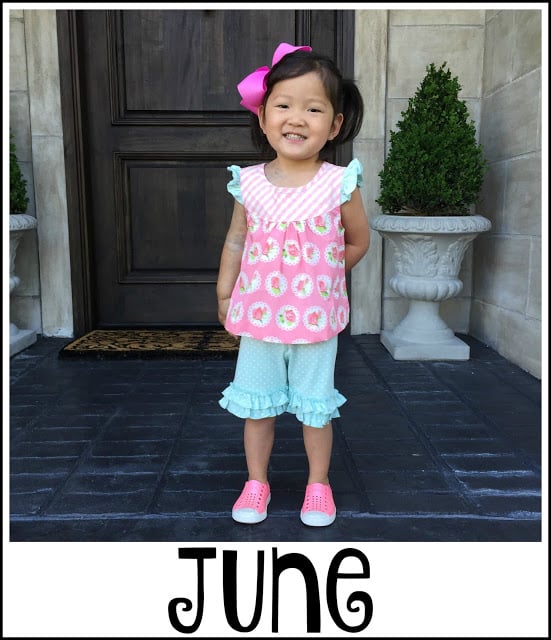 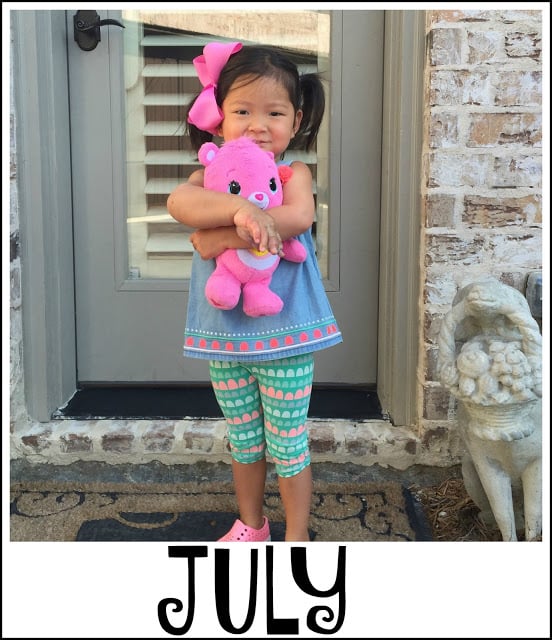 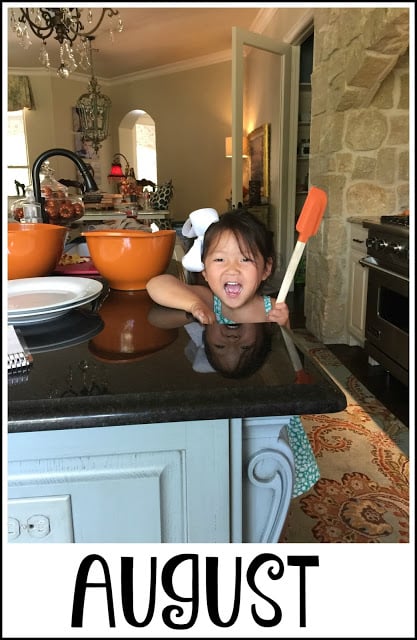 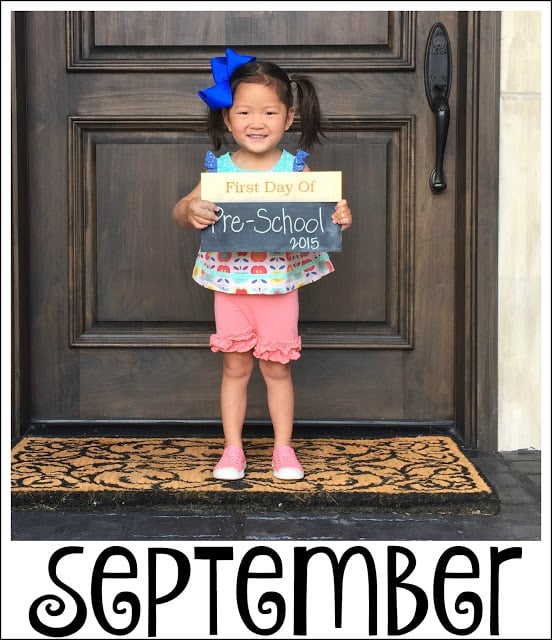 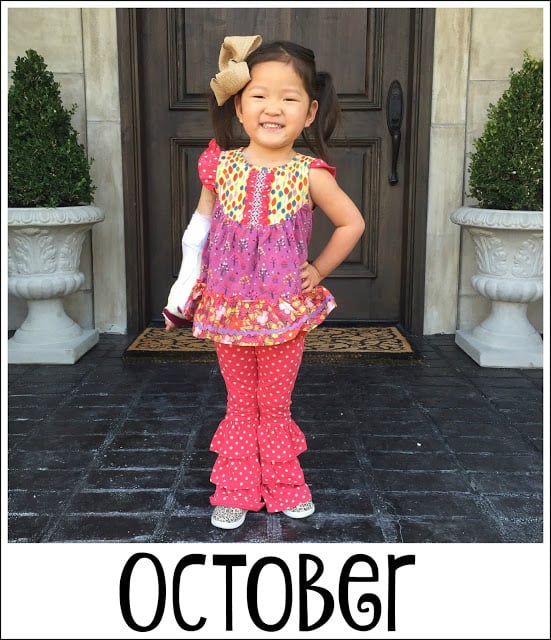 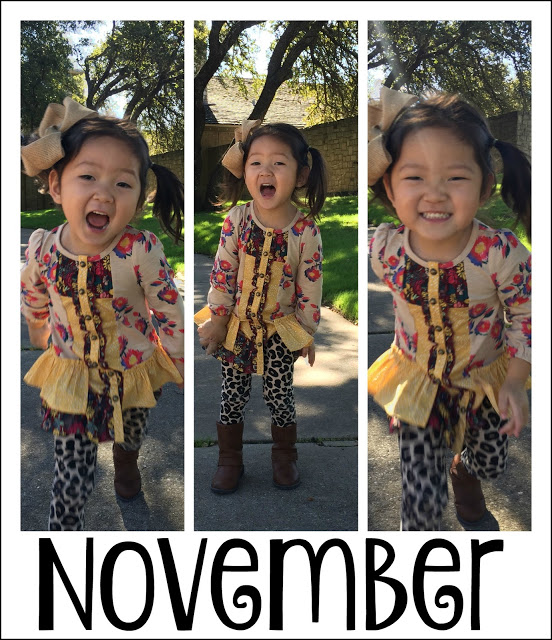 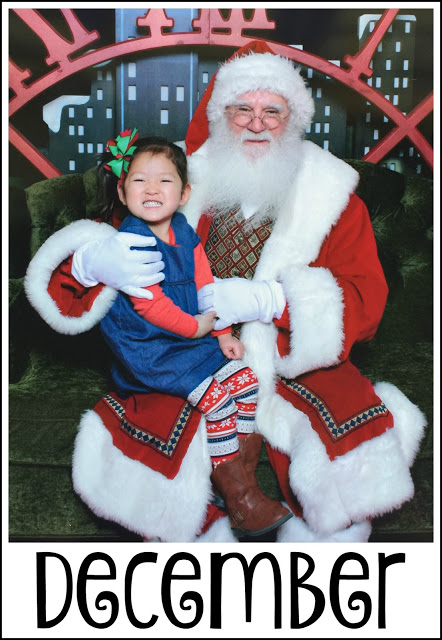 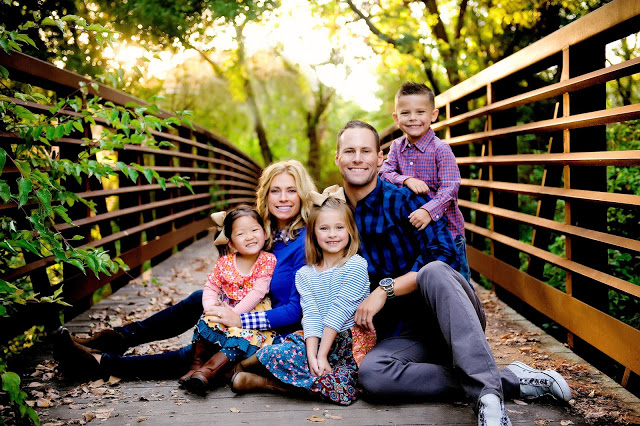 This year hasn’t been perfect.  Having three kids is hard.  Having a kid with health issues is hard.  Having a kid who is coming from an institutionalized setting is hard.  Having a kid who doesn’t speak English is hard.  Listen, it wasn’t easy…but oh my goodness, IT WAS ALL WORTH IT!  Twelve months later, I can say with every fiber of my being that when I look into her eyes, she is as much mine as the other two are.  She might have been born in China…but she was born to be my daughter.  I only wish her birth mama could see her now.  My prayer every day is that one day, we’ll be united in Heaven and she can see her precious girl face to face.  We’re doing everything we can to make that mama proud.
So, how are we celebrating this special day?  We decided our Gotcha Day tradition will be to give Ashby letters from each of us to be kept in a box for when she’s older.  Andrew, Kensington, Smith and I all wrote her one about how much she’s meant to us this year. (Y’all, you should see Kensington and Smith’s letters…they both made me tear up.)  And…of course, tonight, we’re going to have dinner at a Chinese restaurant and we’ll reminisce about our trip to China.  Finally, we wanted to do something BIG to celebrate our first year with Ashby…so the kids said Disney and we agreed :).  Shull party of five will be taking a Disney Cruise over Spring Break to celebrate.  Annnnnd…because Ashby can’t celebrate without her BFF, the Slaughters are coming with us.  Watch out Disney Cruise Line…we’re coming aboard with our crazies!

Praying this morning for those of you who also have hearts for adoption.  I know there might be roadblocks in your way too…but my prayer is that you have faith and push on.  There are just so many kids out with big smiles, big hearts, big love and big potential…they just need a family.

And my foodie blog is up and running this morning with the first Meal Planning Monday of 2016! I’m making your life super simple this week with five meals I know your family will love. 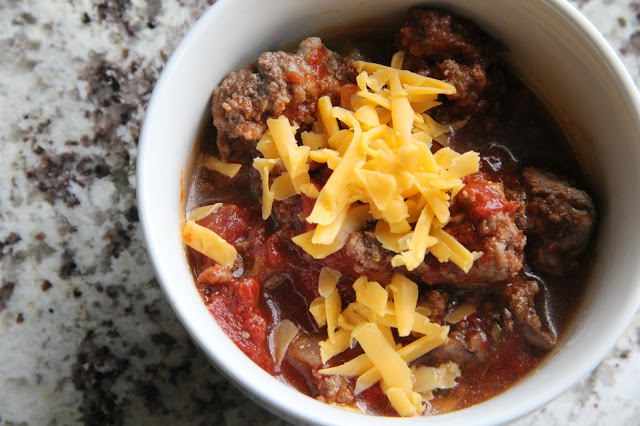