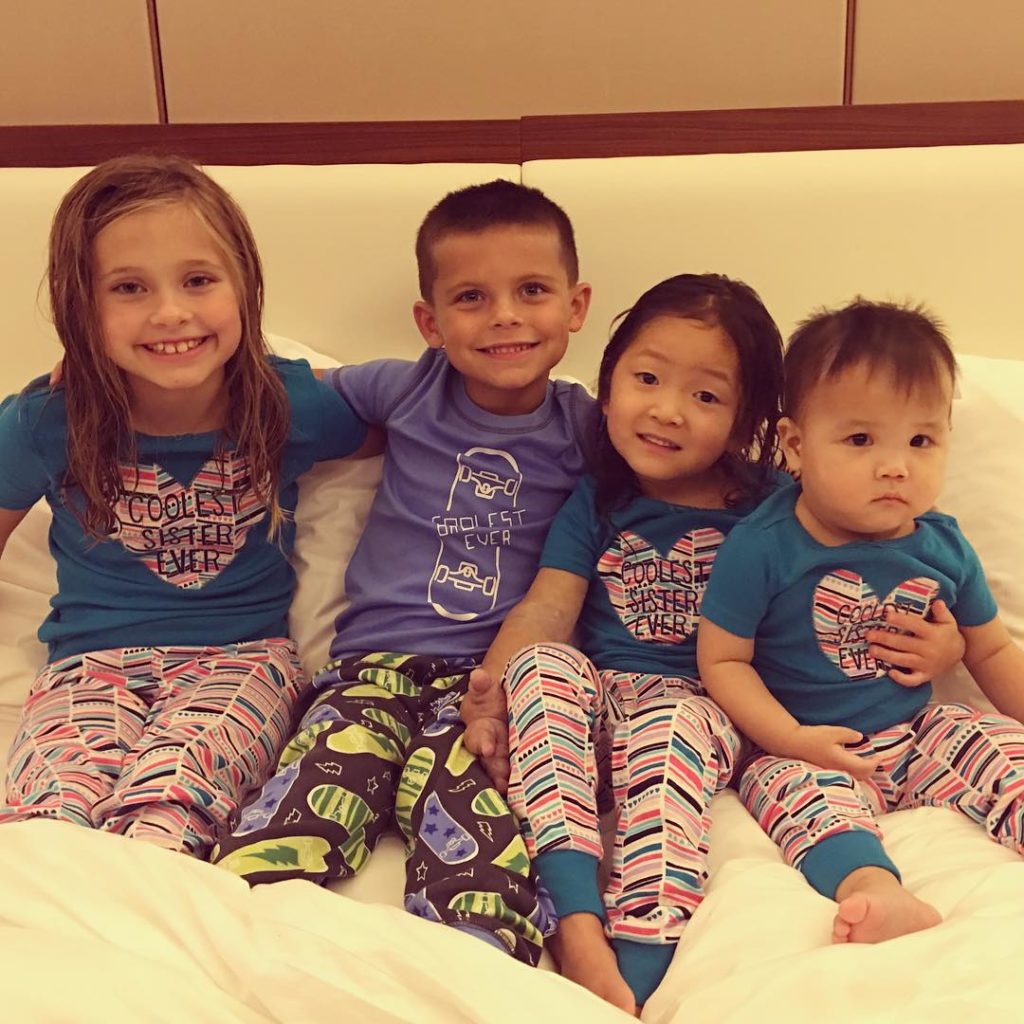 One month ago today, we met our sweet Madeley James.

I mean…we’ve covered a lot of ground (both literally and figuratively) since that day not so long ago that it’s a little overwhelming to even put this month into words. 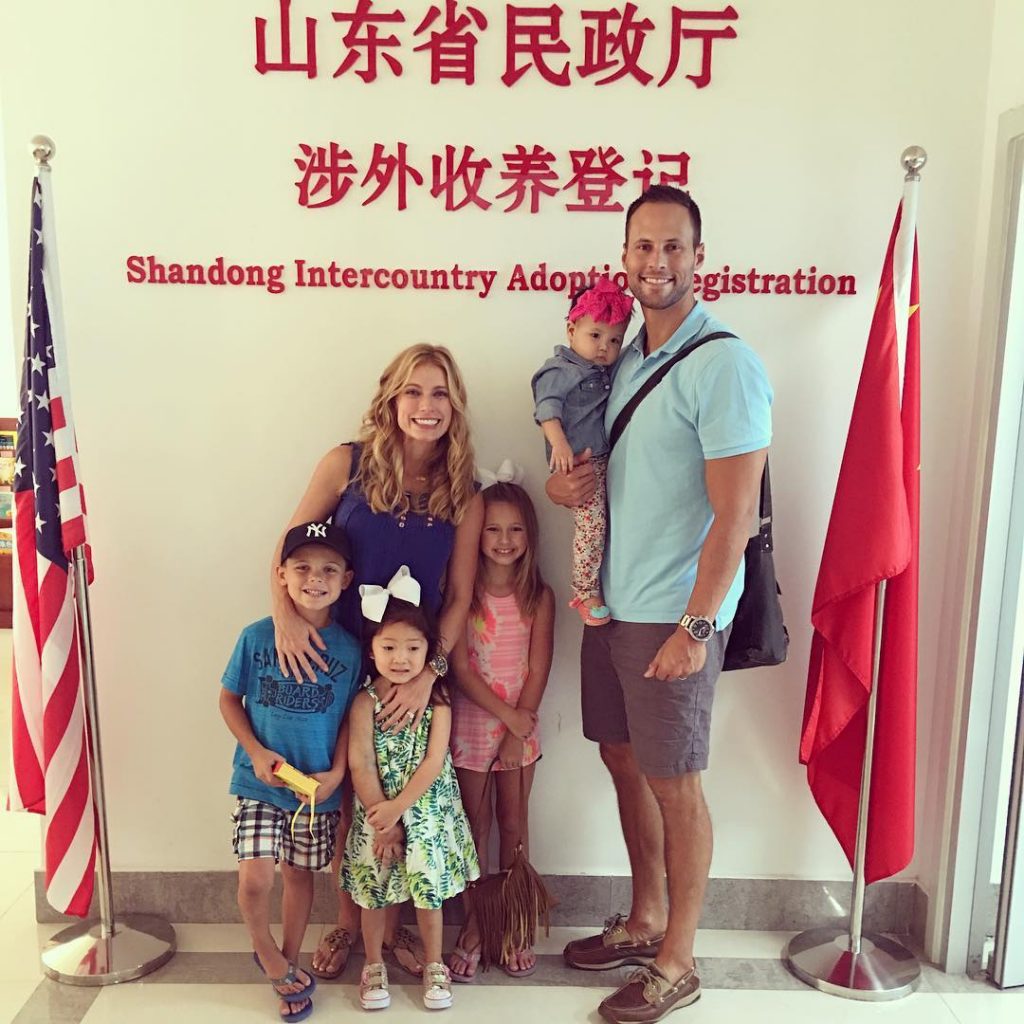 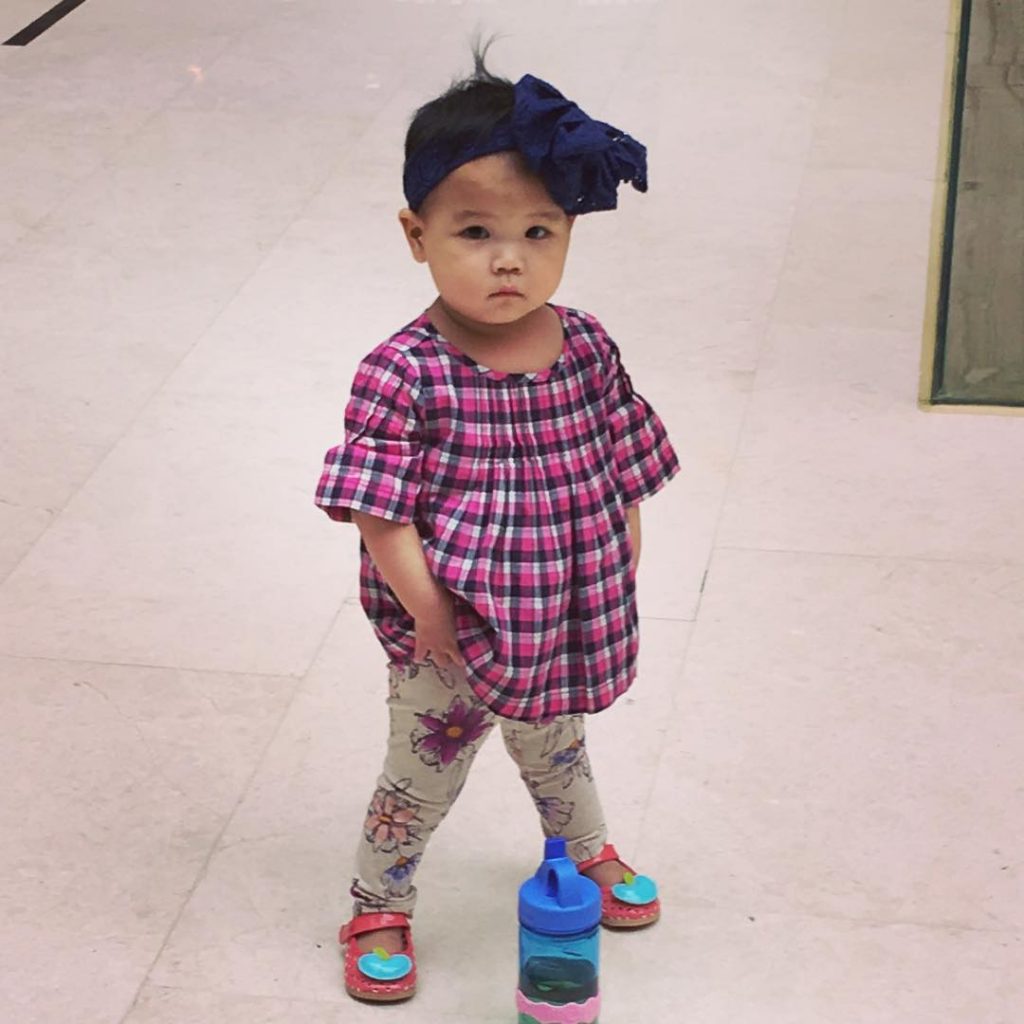 So far, the first few days at home were the hardest.  In China, we did really well with this new transition…because no one had jet lag. The jet lag kicked our rear ends for the first six or seven days back at home and that made everything just a little more difficult.  We were all tired and no one was sleeping great…so you know, that makes things hard.  We felt a remarkable difference after the jet lag subsided. 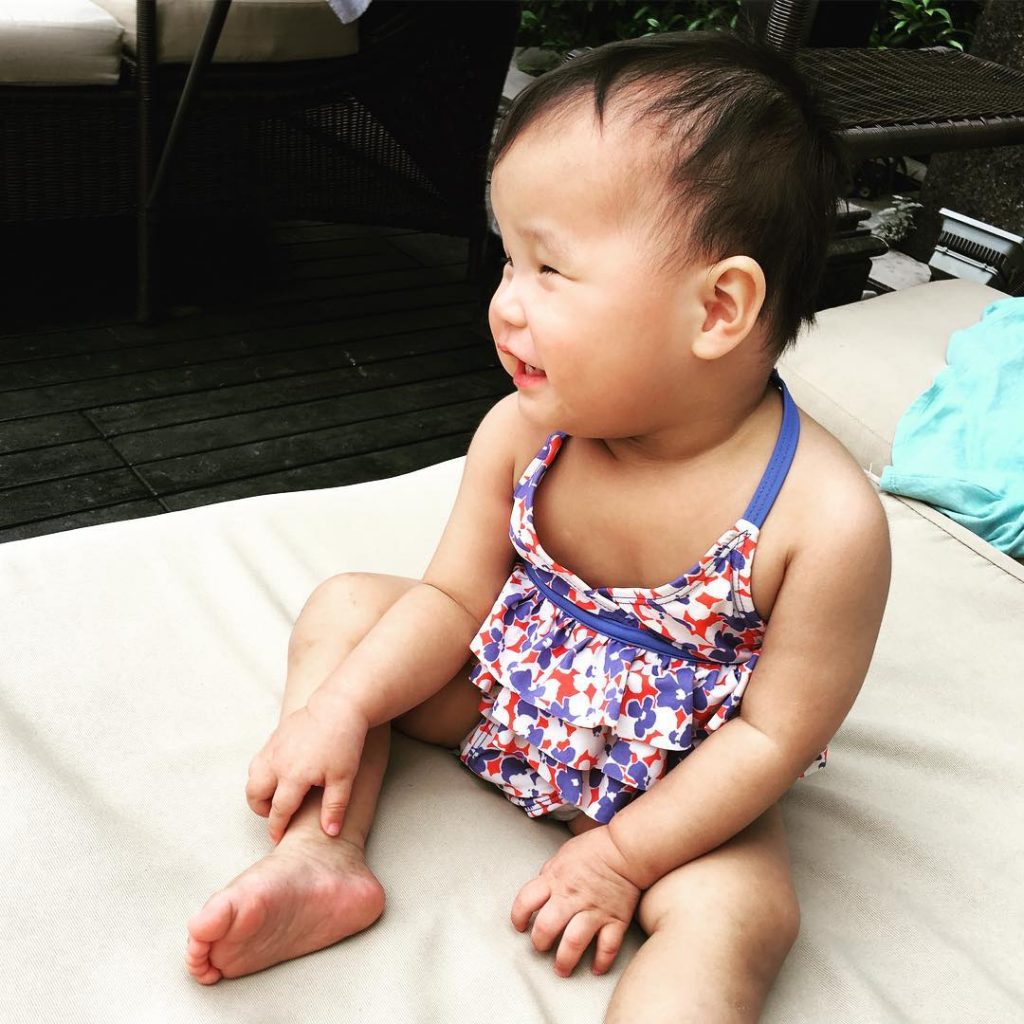 There are a lot of similarities between Ashby and Madeley (and their adoptions), but a lot of differences too. I would say at this point, the biggest difference between bringing home Ashby and bringing home Madeley were their ages.  We brought Ashby home when she was 2.5 years old but Madeley was only 23 months old.  Now I know that’s only a seven month difference…but it has made things completely different.  Madeley just feels like more of a baby than Ashby did.  She still has a little baby cry, she still wears diapers, she sits in a highchair and you know…just feels younger.  Madeley is less independent than Ashby was and not quite as physical.  She’s just younger in a lot of ways and so even though she’s a week shy of two, she feels so small to us. 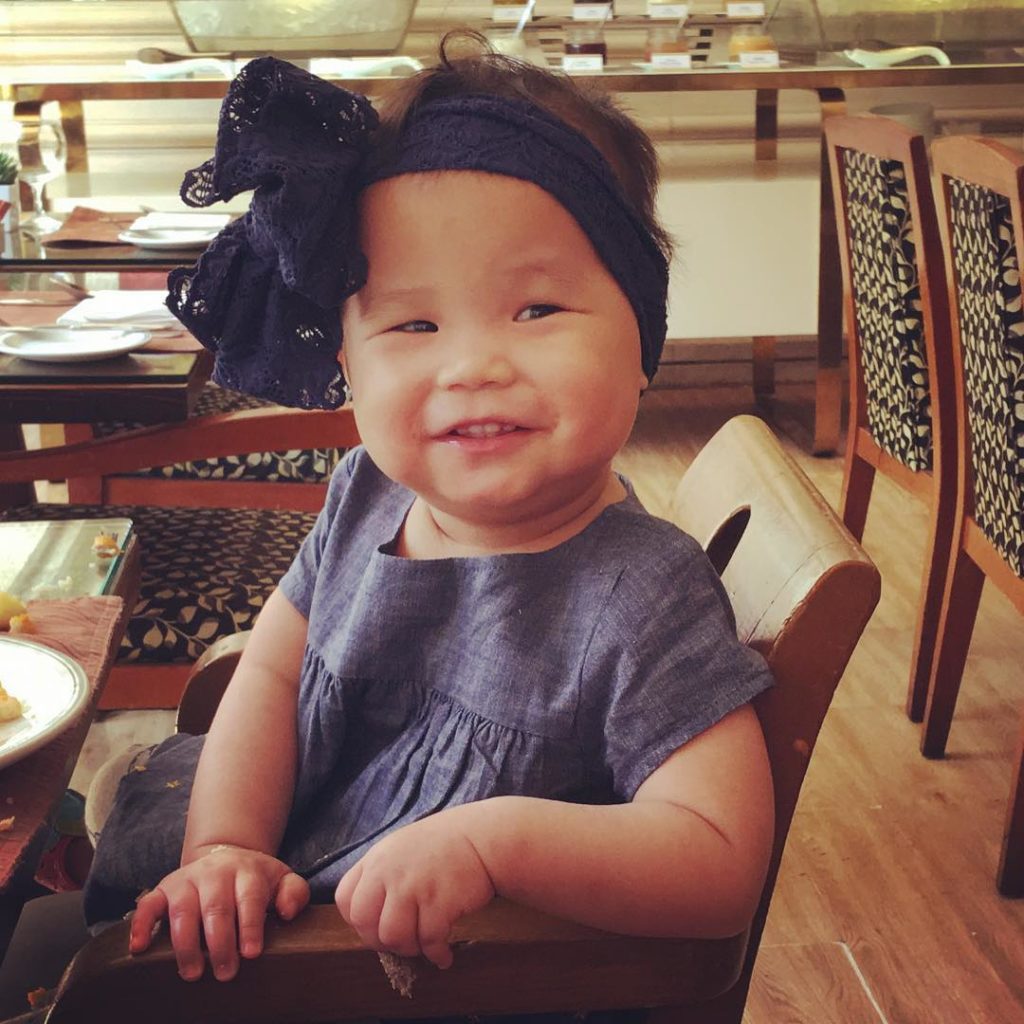 When we first got Madeley, she was like a rag doll.  She wouldn’t/couldn’t hold herself up if you were holding her.  She just slumped over and had no desire/ability to hold herself in the sitting position.  You could sit her down on the floor and she would just fall right over.  The same thing with holding her.  Instead of her looking around and sitting up while being held, she instantly just slumped over against you. In only one month, she’s already come so far in this department!  I can’t tell you the last time she slumped over like that.  She’s doing such a good job sitting and being held. 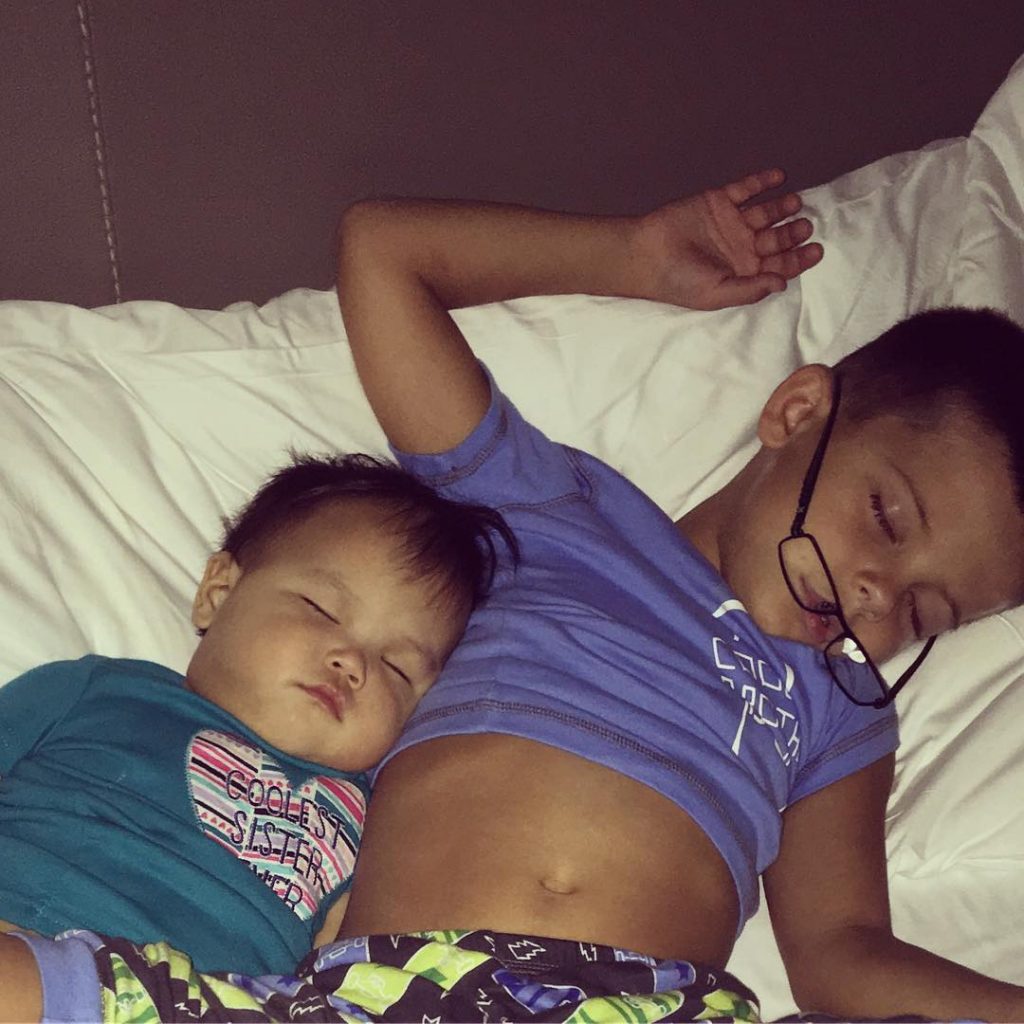 So, I answered the following questions each month with Ashby to see how she was progressing and I’m doing it again this time too.

1: Language- I’m not quite sure how much she understood Mandarin.  Our guides would speak to her and try to engage, but she never did.  I don’t know if this was her just being shy/scared/confused/stubborn or if she just didn’t have the language.  As far as English goes, we’re doing the same thing we did with Ashby…we’re taking things slowly.  She can say mama, dada and bye bye.  Right now, I think she can identify when we say Kensington, Smith, Ashby, drink and eat (and a few more little words here and there), but she isn’t making an attempt to say them.  It’s so weird to have a full on conversation with Ashby and think that only 21 months ago, she was in the exact same boat.  I know some people want to know why we don’t try and keep the Mandarin as well…but one, we don’t know if she even understands Mandarin and two, from what we’ve been told that often times hinders and confuses a kid when they’re being taught two different languages at one time, but their family only speaks one of those languages.  I don’t want to do anything that might jeopardize our attachment, so, we’re just taking things slowly and doing the best we can.  I can tell you this, she hears “I love you” about 4,000 times a day :). 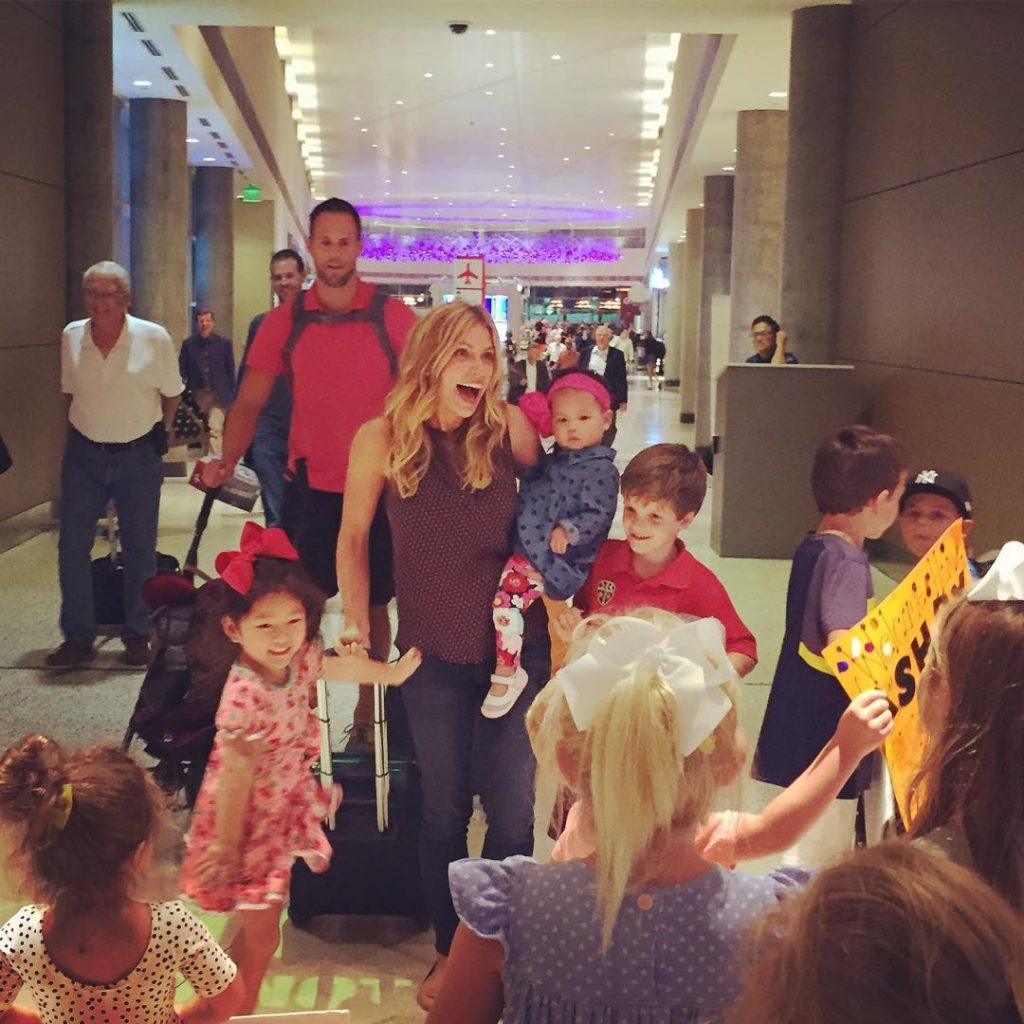 2: Physical Development- Well…we’re learning a lot more this week!  The basics are that she’s on the very small side (less than 0 percentile), but appears to be very healthy.  She’s behind developmentally on every level (physically, behaviorally, emotionally, etc), but that’s very common for kids coming from orphanages.  She has two very big doctor appointments this week to give us more insight into her health, so we’re very grateful for that.  She seems to be doing really well…but we need some professionals to dive in a little deeper just to make sure.  She is on daily medication (per orphanage instructions), so we’re ready to know if she needs it/is on the right dosage/should change it/etc.  We’re very grateful for the appointments this week.

3: Sleeping- Our plan had always been to have Madeley sleep in the bed with us.  Ashby slept in our bed for several months until she was ready to transition to her room…but things went a little differently this time around.  In the middle of one night, Andrew woke up and found Madeley asleep on the floor.  We totally freaked out and thought that she had fallen off the bed (which is weird considering she was sleeping between us).  Then the next night, we woke up to her walking around the room.  Then the next night, Andrew caught her…apparently, she was slithering down to the bottom of the bed and sliding off and then playing on the floor.  So…that’s not safe.  We bought a pack and play and placed it right next to our bed and that’s where she’s sleeping right now.  She’s sleeping soundly and she’s not getting out and potentially hurting herself at night.  Maybe we can try co-sleeping again later…but for now, we have to keep her safe, so the pack and play is doing that.  She naps about 2-3 hours every day and then we put her down at 7:30 PM and then she sleeps until at least 8:00 the next morning.  I do not take this for granted.  I am very grateful that she’s sleeping so soundly.

One other note, she rocks herself to sleep and it’s just about the saddest little thing ever.  I’ve read about this in so many of my adoption books, but I’d never actually seen it before.  Every time she sleeps, she moves very quickly from side to side until she’s asleep (rocking back and forth).  A lot of kids that are in orphanages do this as a soothing mechanism because no one is rocking them, so they rock themselves.  We sit down and rock her until she seems to be asleep, but the moment she lays down, she rocks some more.  If I put my hand lightly on her, she’ll stop, but the minute I raise my hand off, she starts rocking again.  She’s just so used to rocking herself to sleep that she can’t stop.  When Ashby came home, she sucked her thumb at night for the first few months and then all of a sudden, she stopped…and, I hear this works about the same way; she’ll grow out of the need to self-soothe one day.  Until then, we just rock her, sing to her, pat her and let her know she’s not alone. 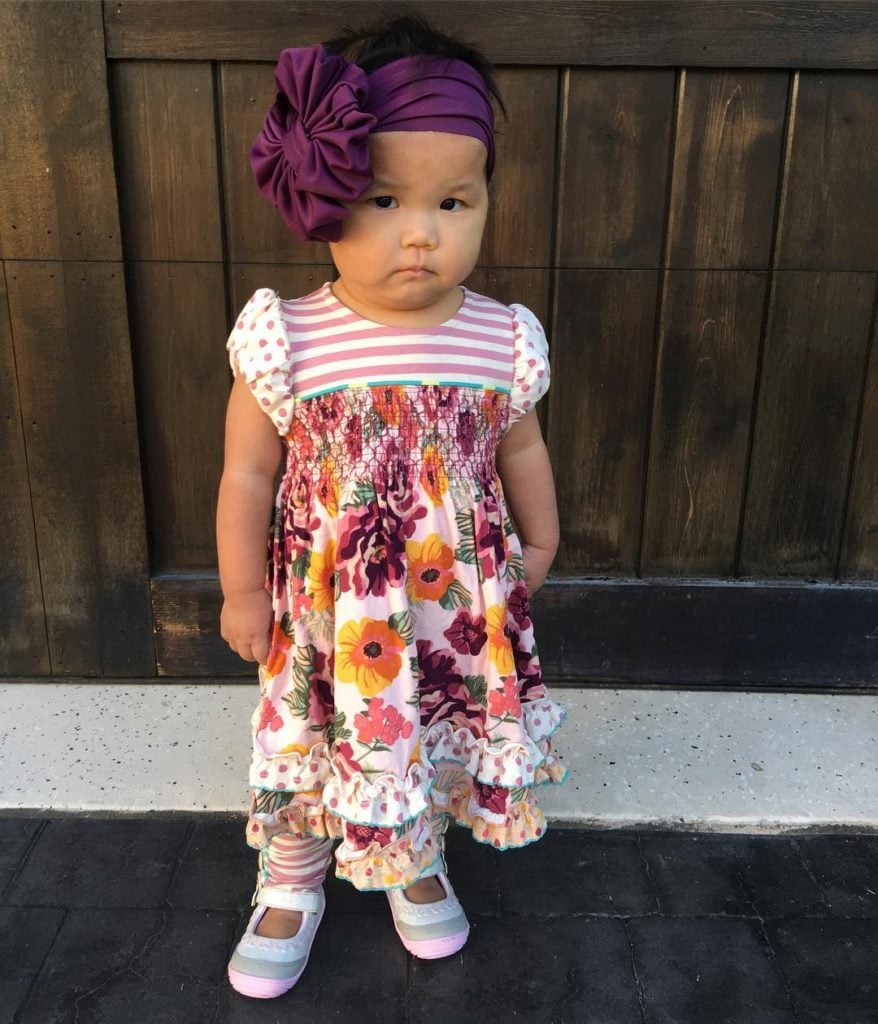 4. Food- For a girl who only received 3 bottles a day for almost two years…she is doing fantastic!  She is eating nothing but solid foods now and loves it.  She is very interested in proteins like beef, chicken, fish and pork and not so much into her veggies (unlike Ashby who cannot get enough!).  She’ll eat pureed veggies, potatoes and such but she doesn’t want raw, whole veggies.  I made Sloppy Joes one night and she ate 3 helpings and then later in the week, I made chili and she did the exact same thing.  I am so relieved that she’s eating.  We were very concerned the first few days that this would be a big challenge. 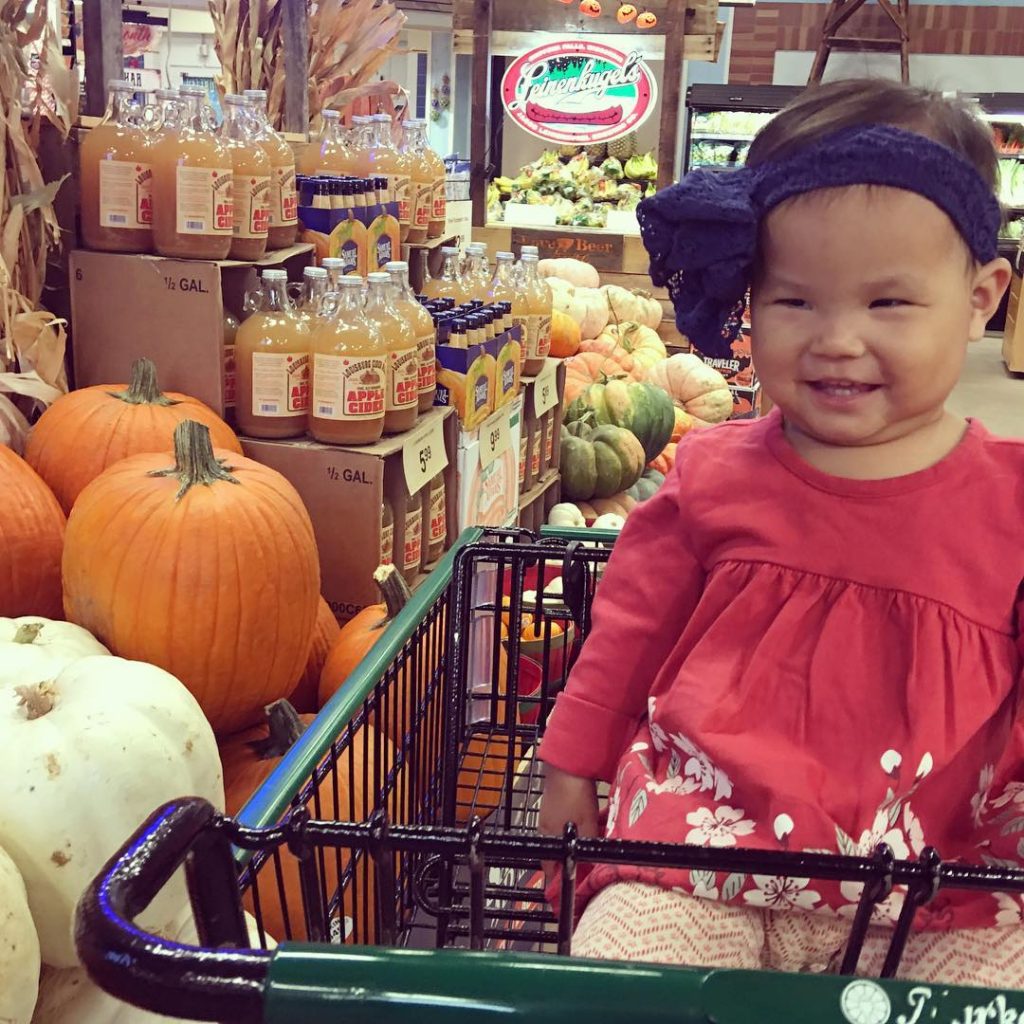 5: Attachment- We seem to be doing just fine.  As of right now, no one but the doctor has held her (not even grandparents!).  We are trying so hard to really build attachment and bonding.  She is with Andrew or myself all.day.long.  Two mornings a week, I go to the gym with Ashby and Andrew stays home with her (that way just the two of them can work on attachment without the distraction of other kids) and then the rest of the time, she’s with me (and then all of us at night).  Attachment is a tricky thing…but as of now, I feel really good about where we are. 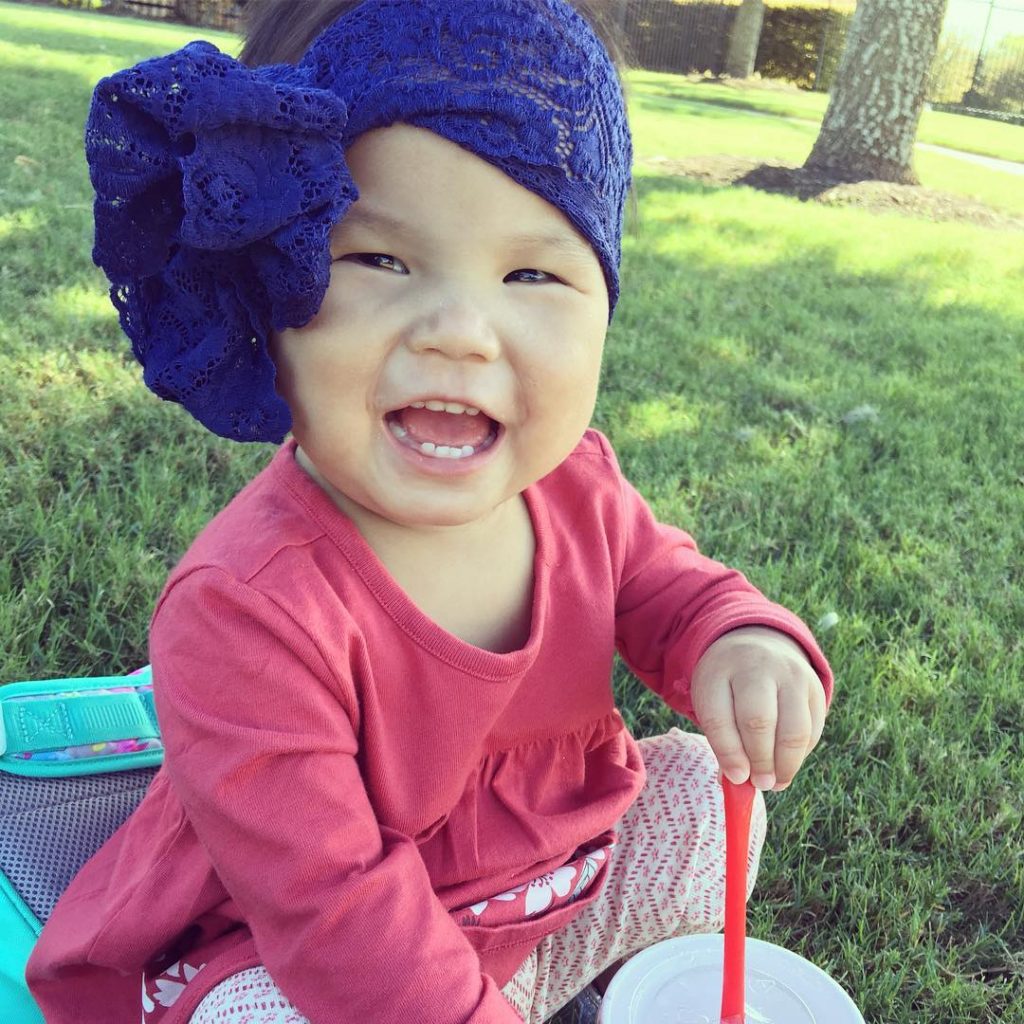 6: Poppy- She is okay with the dog.  Ashby screamed her head off for days after she met Poppy but Madeley seems pretty indifferent.  I mean…they’re not playing fetch or anything, but she’s not bothered by her. 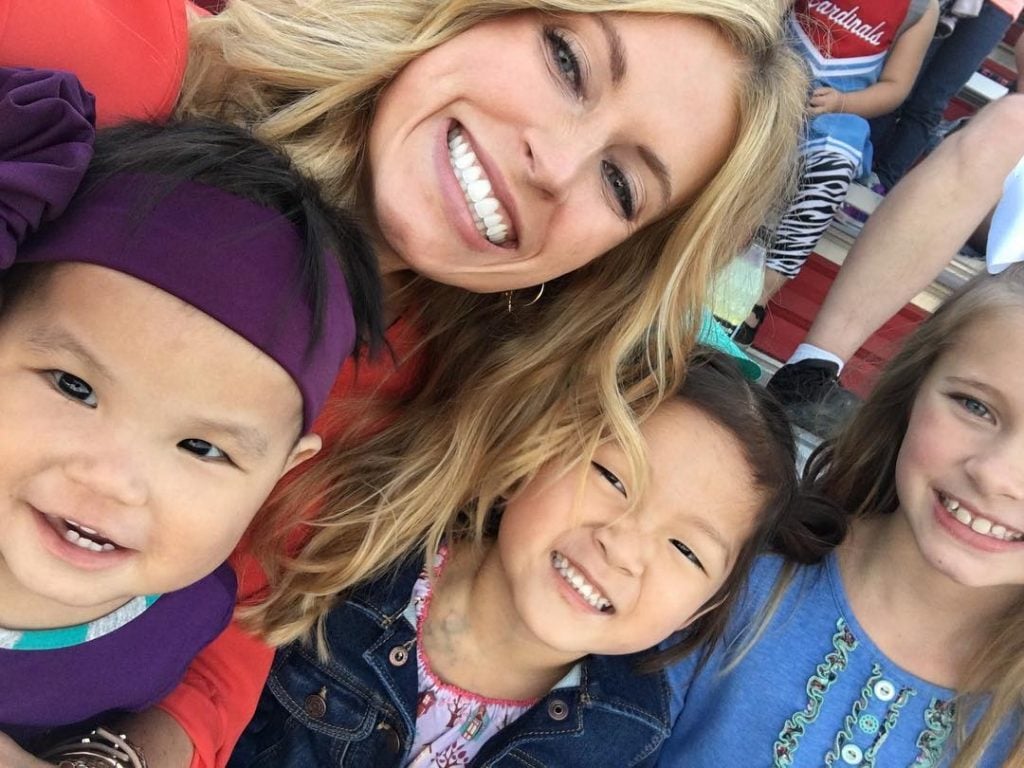 7: Potty Training- Oh we have a long time before this! 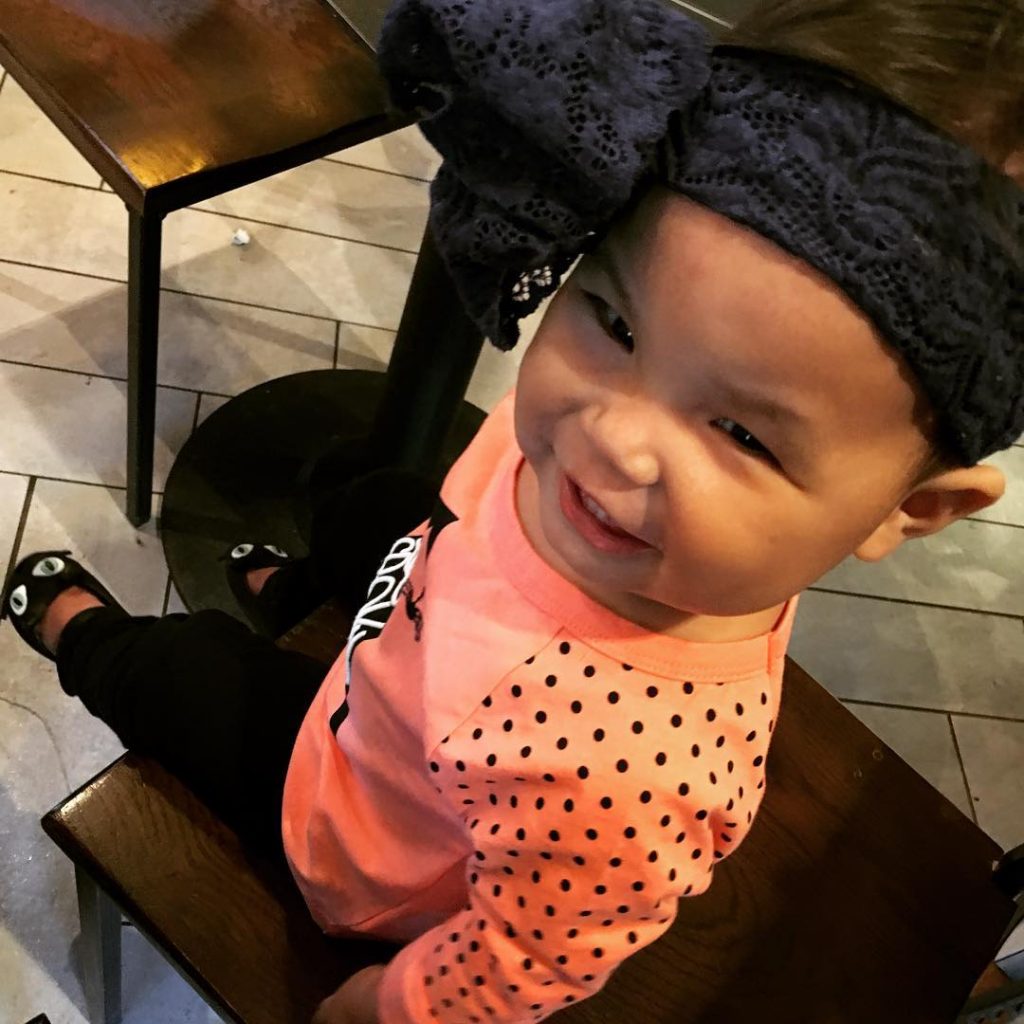 8: Going out- Madeley seems to be a trooper when we’re out.  She really seems to love to people watch, and she loves to point to things (balloons, birds flying, tall trees…she’s always pointing to something!).  She’s really just a happy little thing.  She’s all smiles almost all of the time. 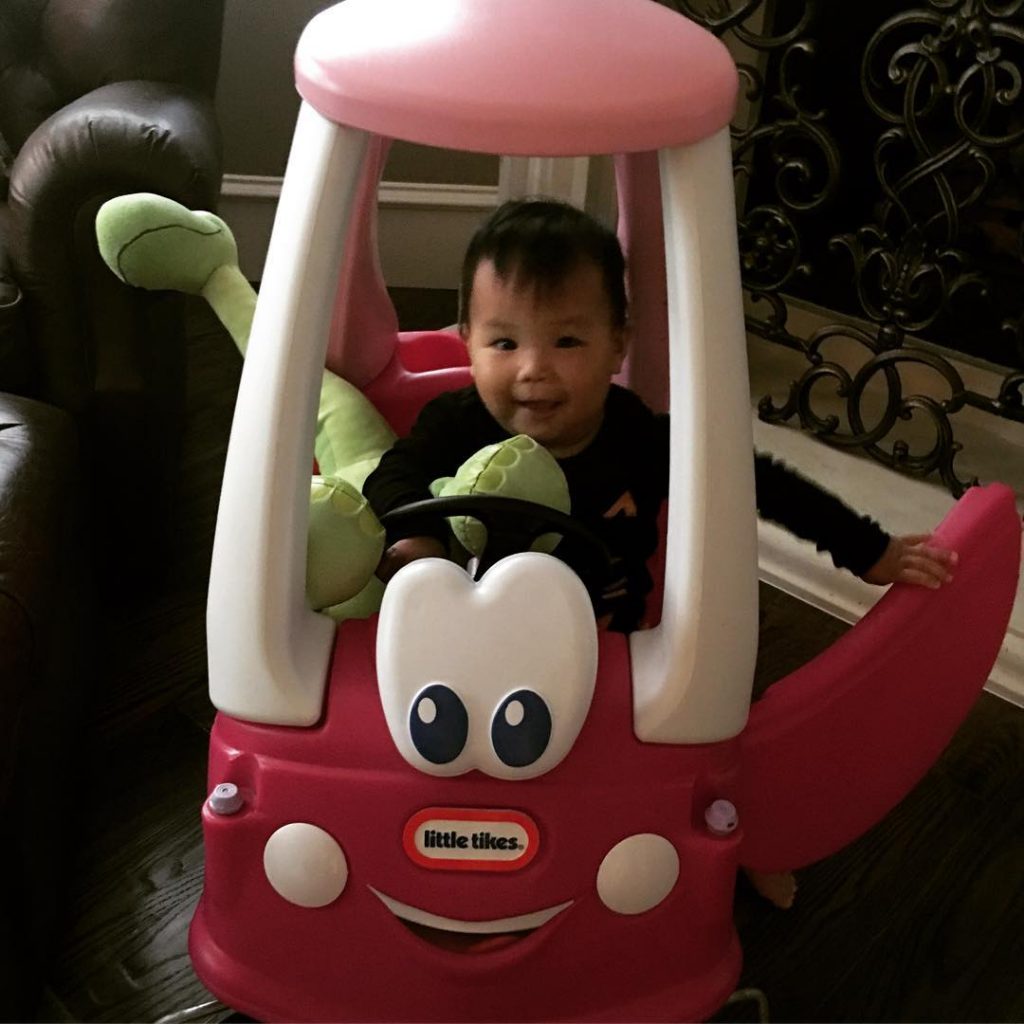 9: Playing- Most of our days are spent playing.  The big kids go off to school (and then Ashby goes two days a week), so Madeley and I play, play, play when they’re gone.  She loves to stand and push things around (like the pink car pictured above), she loves any toy that lights up and plays music, she loves the big wooden puzzles and she loves to stack things.  She’ll stack large duplo blocks, the jars of Play-doh, canned goods…anything she can stack, she does.  We’ll sit on the floor and stack and unstack things all day long 🙂 .  She’s so much more independent now than even three weeks ago when we brought her home.  At first, she didn’t want me to put her down.  And then, she didn’t want me to leave her side, but now, she’ll toddle into the next room and then bring me back a toy she wants us to play with.  I want her to feel at home and comfortable around the house, and slowly but surely, it’s happening.  She knows which cabinets we keep certain toys and will now open them without being prompted and pull out what she wants, so that’s all good news.

I’ve never been a worrier…but it does get a little overwhelming sometimes when you stop and think about how far she needs to go to get caught up with typically developing kids her age.  I had the same thoughts with Ashby during the day that I’m having now.  When everyone has gone off to work and school and it’s just Madeley and me, I start to think about all the things we need to work on together as we play and then I have to just dismiss the thoughts because…all she really needs right now is to be loved.  Every time I think, oh goodness, we have so far to go…I tell myself, just like with Ashby, all I need to do is love on her and the rest will come.  Easier said than done, but it’s something I tell myself all day long.

So, it’s been a month.  One month with this precious little girl.

I’ve prayed for this kiddo for a long time…and what a blessing it is to finally get to be her mom. 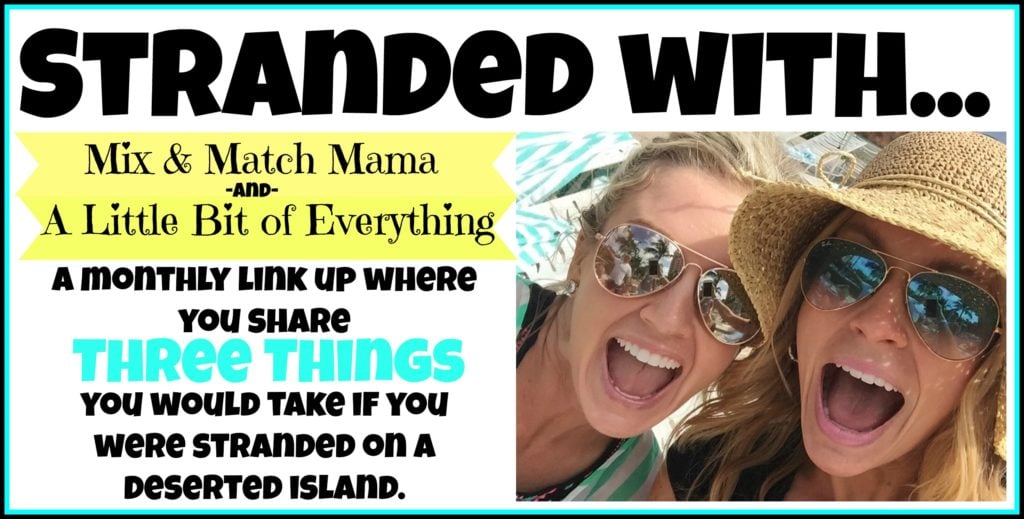 Don’t forget, tomorrow is Stranded!  If you’ve blogged along with us, then don’t forget to link up.  The topic: our favorite Halloween candy. #amen

To see other posts on our adoptions, look below…

Meeting Madeley for the first time: HERE
All of our China travel posts: HERE