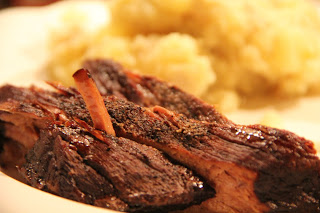 My mom likes to pretend like she isn’t a cook.  It’s a lie.  She is a fantastic cook and brisket is one of her specialties.  This is the most basic brisket you can make.  It’s a no-fail, one hundred percent successful version.  (I will blog other variations later.)  I’ve had several people ask me about making briskets and honestly, they are soooo easy and the longer you cook them, the better they taste.  Plus, with the leftovers you can have yummy brisket tacos or sandwiches the next night.  It’s such a multitasker.
Let’s get started…
Shopping List
2 pound brisket (it will be in the meat case at the grocery store.  It will most likely say “trimmed”.)
1 (4 oz) bottle liquid smoke (either Hickory or Mesquite flavored…it doesn’t matter)
1 cup water
3 tablespoons vegetable oil
1 pound either red potatoes or baby Yukon gold potatoes
3 cloves garlic, chopped
1/4 cup butter
3-4 tablespoons butter
1/4 cup Parmesan cheese
Lots of salt and pepper
You have two options: 1. make this in a heavy pot and keep it in the oven all day at 250 degrees or 2. brown it on the stove and transfer it to your slow cooker to cook all day on low.  I do it both ways however, I find myself doing the oven method more often so that I don’t have to make the transfer.  However, if you don’t like to leave your house with the oven on, then you pick option 2 and transfer to the slow cooker.
Heat vegetable oil in large pot over medium-high heat, salt and pepper FAT SIDE OF BRISKET and lay down in pot to brown 4-5 minutes.  While that side is browning, salt and pepper the other side that’s now facing up.  Flip brisket over (so now the fat side is up) and brown the other side an additional 4-5 minutes.
At this point, if you’re using the slow cooker version, you transfer the brisket to your slow cooker and proceed.  Cook on low 6-8 hours.  If you’re going to continue cooking the brisket all day in the original pot, then proceed on.
Add in bottle of liquid smoke and water.  Cover tightly (if you’re using the oven version, I put foil on top of the pot then cover it with the lid for twice the insulation).  Cook all day…seriously…8-10 hours.
Twenty minutes before you’re ready to serve, remove brisket to a cutting board and place a piece of foil on top.  (This will keep the brisket warm but allow the juices to redistribute and stay moist at the same time.).  After 20 minutes, slice brisket and serve with your favorite BBQ sauce and my smashed potatoes.  See below…
Bring a large pot of water to boil.  Cut each potato into four pieces.  Add in all potato pieces.  Boil until fork tender (about 10 minutes).  Drain.  Add in butter, garlic, milk and cheese and smash with either a potato masher or wooden spoon.
Regardless which cooking method you use, you’ll come home to a house smelling sooooo yummy and a warm, hearty dinner waiting on you.