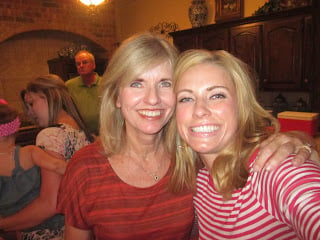 Once upon a time, Shay became a new mommy to baby Kensington…
…Kensington was born on a Monday, released from the hospital on Thursday and by the following Tuesday, her Lovie was at her house declaring every Tuesday a “Lovie Day”.
Tuesdays would consist of Lovie showing up at 9:00 and leaving at 6:00.   At first, these days were for me to gather my thoughts as a new mommy.  I could grocery shop, pay bills, run errands, clean up around the house, go get my hair done, take a nap (which I never did but I should have…) and so on.  They were life savers for me as a new mom.  My friends often joke that they want Lovie Days too (I wish I could share her but I just won’t!).
However, Lovie Days became an even bigger life saver just a few months in…first, I became pregnant again, which meant me being sick 24/7 (and it’s hard to function when you’re throwing up round the clock for 9 months), so having one day to function without an infant was so nice.  And on top of that, I’ve had some health issues for the last 4 years that have required me to visit one or two doctors every.single.Tuesday (how would I have managed that with two kids without some help???), and so not having to worry about them while I was at speech therapy, the orthodontist, the ENT or the periodontist every week was a real blessing.
But…to top it all off…my kids have grown to loooooooove Lovie Days.  They wake up almost every morning and ask if it’s Lovie Day.  They have spent countless hours playing outside, going to the mall, eating McDonald’s, swimming, going for walks, reading books and just lovin’ on their Lovie.
But now, Smith and Kensington are both in preschool on Tuesdays, so Lovie Days are coming to an end (sort of…Lovie isn’t off the hook for holiday breaks and summer!).  So what’s a Lovie to do on Tuesdays now?  She’s going to drive an hour to pick them up every Tuesday from school and keep them for just a few short hours because she loves them so.
Thank you mom for all of the Lovie Days.  You have helped me more than you know.  I love you so much.  I was so blessed to grow up in your house where every day was a Lovie Day.
XOXO
﻿