Wow!  I am so excited that the first episode is finally here!  I thought January 7 would never come.  I have watched every single season of this franchise (every one!), so to see my brother be the lead was absolutely crazy.  Last night, was perhaps one of the coolest nights of my life.
Ok…so here’s the deal…just like last season on the Bachelorette, I’m going to recap every Tuesday.  I’ll show you some pictures (sometimes they’ll be behind the scenes, sometimes not), I’ll answer your questions, I’ll give you my my favorite parts from the episode and I’ll give you my two cents.  I will not spoil anything, so you don’t have to worry about that!  If you ever wanted to know what the Bachelor’s family was thinking as the episode was airing…this is your place.  Let’s  go… 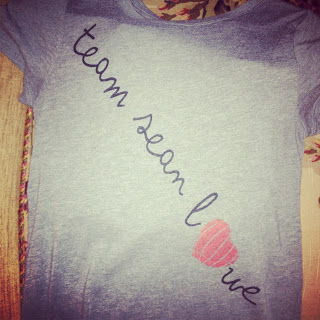 I was extra fashionable yesterday and wore my Team Sean shirt.  Sean’s business partner had these made during the Bachelorette...if they become available again, I’ll let you know. 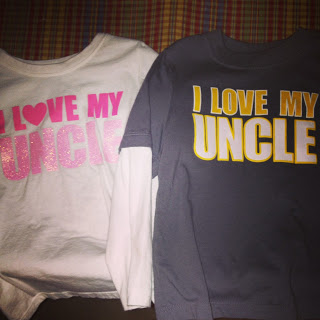 And my kids wore their favorite shirts too. 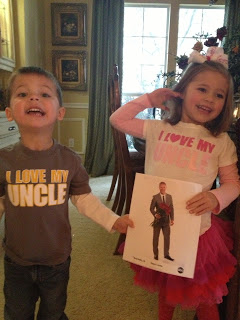 My kids were super excited all day yesterday.  Even though they’re just 3 and 4, they know what’s going on.  This has been a family experience…and they’re a part of the family.  They know that Sean was on the Bachelorette but that Emily picked Jef instead of him (it’s funny because they can identify Emily, Jef and Arie when they see their pictures).  And now, they know that Sean is the Bachelor and that he’s on a show looking for a girl to love.

I glanced down at my Pandora yesterday and saw this…super weird to see my little brother on my Pandora! 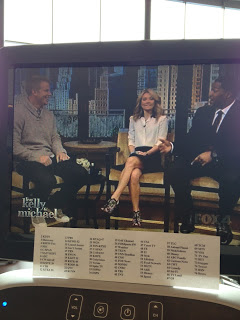 Just your average day of running on the treadmill at the gym and watching your little brother on Live with Kelly and Michael ;). 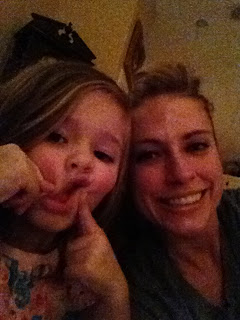 Kensington and me during a commercial break last night.  We’re excited girls!
Ok…the bullet points:
1. Yes, we let our kids watch the show.  We wanted them to see themselves, Uncle Sean and the pretty ladies.  We explain things as the show unfolds and will continue to let them watch it as the season progresses.
2. At the beginning of the episode, I really was doing face time with Sean on the i-Pad (that wasn’t manufactured) .  He had been in California a few days and the first episode was about to tape…it was the last time I talked to him for several, several weeks (actually, almost 2 months).  I really missed him when he was gone.
3. The scenes you saw with Sean and my kids at my parents’ house were really easy to film because he really does play with them like that all.the.time.  Every week, Sean sees my kids and they play.  He doesn’t just turn on the “uncle” when the camera crew shows up.  Toddlers wouldn’t participate with someone who was just doing it for the cameras…the relationship between him and my kiddos is genuine.
4. I was asked a lot when the show started filming…the answer is September.  We’ve waited months and months for last night’s episode.
5. And yes.  I do talk a lot.  Sean tweeted me immediately and said he meant it with love (when he said his older sister talked so much that he grew up to be a man that didn’t talk very much because he never had the chance).  No one in my family would argue that point!  And trust me…he’s super, super happy I do talk a lot…I keep mom and dad busy with what I’m saying and they don’t have nearly as much time to quiz him about his life…it’s a perfect balance.
I really liked last night’s episode.  I thought he had a lot of really beautiful women to meet and get to know.  I felt bad for the ones who had mishaps (the girl who tumbled, the girl who sang).  I really liked what Kacie B. was wearing…she gets my vote for best dressed of the night.  I did think there was a wee bit too much spray tan going on several girls…ok…a lot too much on many girls.  But overall…based on what I saw, there were some fun, interesting and gorgeous girls there to meet my brother.
My favorite part of last night’s episode…well Arie of course!  That opening scene was hysterical!  Sean and Arie really are friends…that was very genuine (and comical!).  Whoever came up with the idea of Arie showing up, should get a raise.
Last season, I hosted watch parties every Monday night in my home but this season, I just wanted to sit back in my pjs and watch with my little family.  (My mom and dad were at home watching it by themselves too…after it finished airing, we talked on the phone and swapped notes.)  Last night was really, really special for us.  I wasn’t surprised by anything (that’s a perk of being the Bachelor’s big sister…I get to know everything in advance), but I was just proud of how Sean carried himself.  He was sweet, sincere, charming, funny and pretty darn handsome if I do say so myself.  I can’t wait for this season to unfold.  It’s going to be fantastic!
One last thing…if you’re new to me and my blog…here are some things you might want to know.  First, I’m a foodie blogger, so check out my recipes and read family stories of what we eat and how we entertain over at Mix and Match Mama.
And…if you know me, you know one of my besties Sheaffer.  In honor of the Bachelor, she’s going to be featuring A Bachelorette Told Me To over on her blog every week.  You must check this out too!
Ask me questions…I’ll be answering them in the comment section and in next week’s post.  Happy Tuesday!