Well, I’ve done it again.  I’ve signed my life away to The Bachelor franchise.
I swear, I’ve kept more secrets for these people then one should have to.
Here’s one…
Emily dumps Sean for Jef
Here’s another…
Sean’s the new Bachelor
Oops, one more…
Sean picks Catherine
And let’s not forget this one…
Sean and Catherine are getting married on live TV
So, after I finally thought my Bachelor secret keeping days were over, I now have more…what happens on The Men Tell All.  You have to wait and watch this Monday night, because this girl is keeping that to herself.
What I can tell you?  Sheaffer and I had a blast at the taping over the weekend!
This was my first taping and now that I’ve been to it, I’m bummed that I didn’t go when Sean was on both times.  I didn’t go when he was on The Bachelorette’s Men Tell All because at that time, we knew he was the next Bachelor, so I was saving my trip for that taping.   And then when he was the Bachelor and was on The Women Tell All, we already knew he was on Dancing With The Stars (another secret), so we wanted to save our trip out to LA for that (which we did).  Nevertheless, I thoroughly enjoyed Kaitlyn’s episode!
So, I can’t spill the beans…but I can show you a few pics and tell you about our fun little trip out to LA :).
So, let’s start with the fact that I had THE BEST time with Sheaffer!  I seriously laughed the entire time I was with her.  A few things to note…
1. We thought our plane crashed.  (Only for a brief second but still, it was traumatic.)
2. We decided that my hair is like wine and her hair is like milk…mine gets better with age (i.e. not washing it for several days and hers does not).  I don’t know why, but we laughed about this a lot!
3. We now feel super cool and trendy because we used Uber a lot (very unlike the SUV driving suburban moms that we are).  (Let’s pretend we’re cool, okay?)
4. Eight hours of being at the taping proved we have bladders of steel…you really weren’t encouraged to potty during the taping…that’s a long time for both of us to hold it (we considered it a HUGE accomplishment!).
Here ya go… 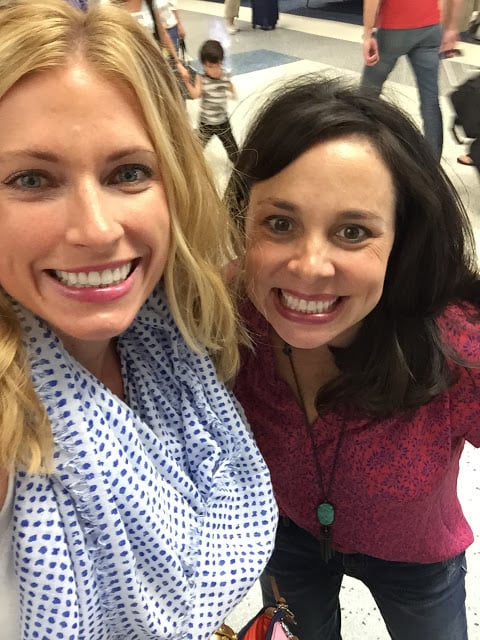 We left Friday afternoon and headed out to LA.  We read, talked and laughed a lot on the plane.
(You can find my scarf here.) 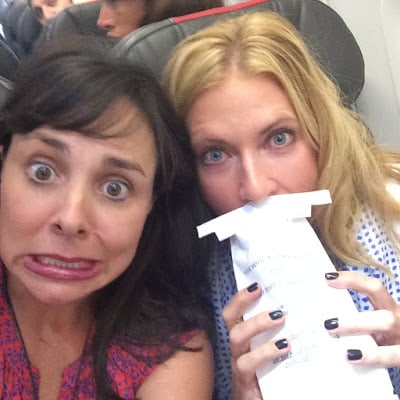 We were descending into LA and I checked out the window and saw clouds and then like 30 seconds later, the pilot made a very abrupt landing.  Sheaffer and I (and a few other passengers…we checked…it wasn’t just us) were very startled.  We weren’t expecting land that quickly.  We may or may not have grabbed each other like our plane was going down.  And then we both felt nauseous.  Sigh.
And FYI, my nail polish is OPI Lincoln Park After Dark :). 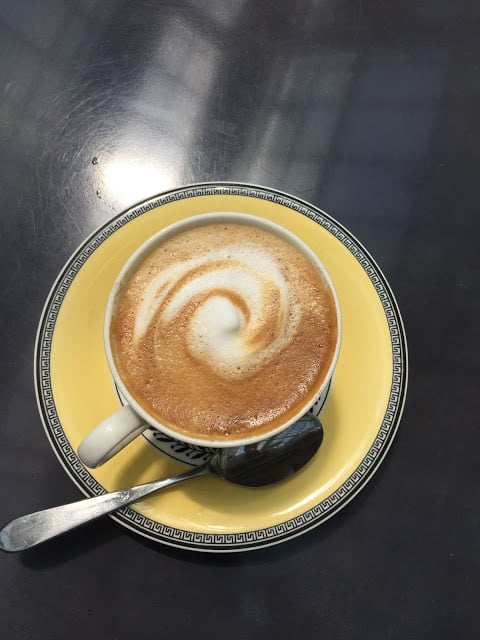 We arrived at our hotel and headed for caffeine.  Me a cappuccino and Sheaffer a Dr. Pepper. 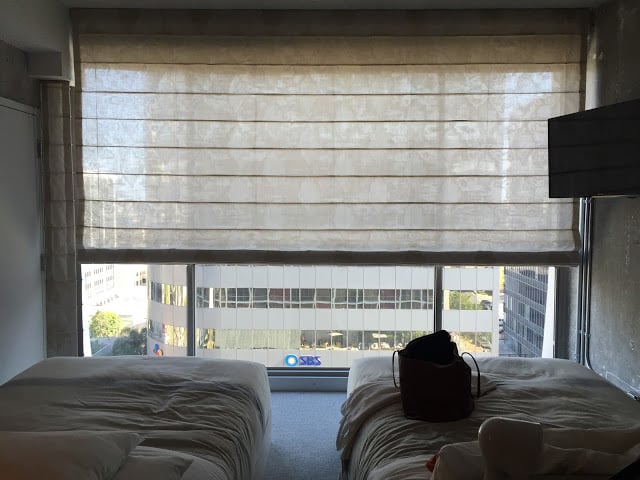 We stayed at The Line Hotel and love, love, loved it.  Several people pointed out on Instagram that it looks kind of prison-like…and well yes, the unfinished details do produce a prison-like feel but I’ll tell you, it was so nice.  Sheaffer’s sister-in-law lives in LA and sent us three of her favorite picks, so I looked into each of them and picked this one for their reviews and convenience to our destinations.
Here’s what I liked about it:
1. Wi-fi worked without any login, anywhere in the hotel.
2. Private car transfers to and from the airport.
3. Very friendly and efficient front desk and concierge.
4. Room service was super quick.
5. A really good organic farm to table restaurant was located on the second floor.  We ate there three times! (One snack, one breakfast and one dinner)
6. Very nice, clean, spacious and comfortable room with huge windows and a nice view.
We arrived, had our caffeinated beverages in the open air restaurant by the pool and then went up to our room to chill out a minute before heading to dinner. 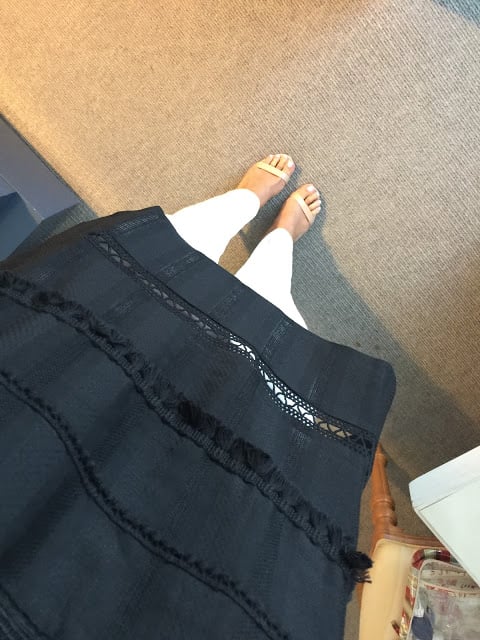 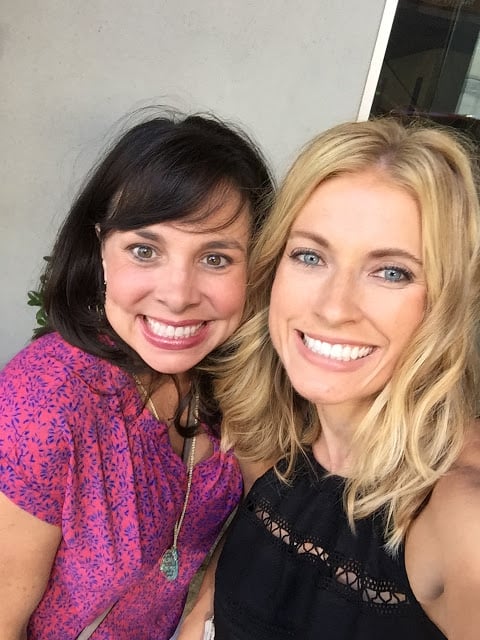 Because we love Lisa Vanderpump, we had made reservations at SUR for dinner.  The food was so good (goat cheese balls people…goat.cheese.balls.).  We didn’t see anyone famous there (for those of you who don’t know…they film a TV show inside the restaurant), but we had a really good time and enjoyed the food!  (And several people on Instagram asked me what color lipstick I have on…it’s Uber Beige found here).
After we finished dinner, we walked to Pump (Lisa’s other restaurant just down the street) for a drink and dessert.
I’ve mentioned it before…but Sheaffer fusses with her hair quite a bit when taking selfies.  So, here I am waiting on her to take our picture… 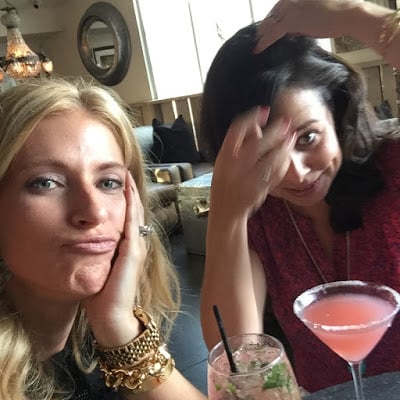 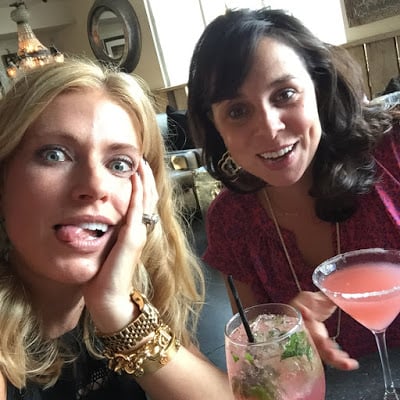 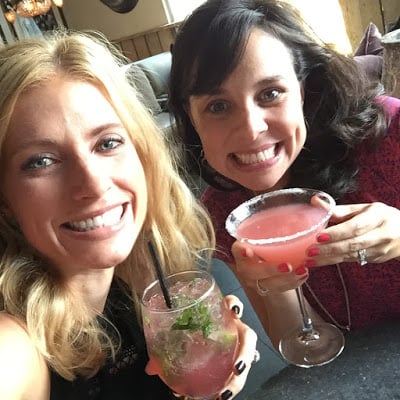 Love this friend of mine :).
So…I hate to tell you this…but the next day is going to be very anti-climatic.
We woke up, had breakfast at the hotel… 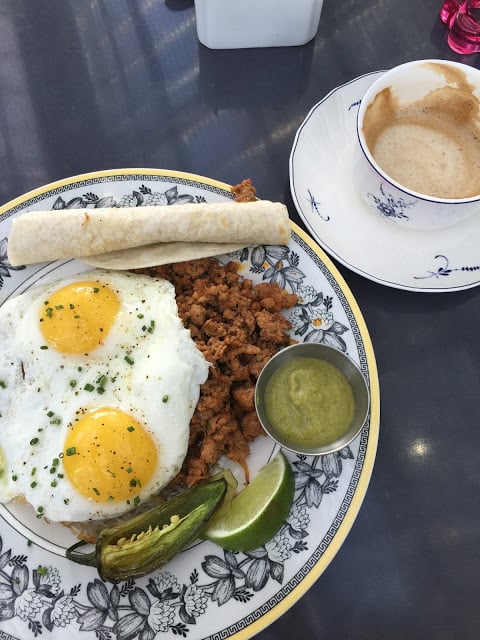 Hello yummy!
…and then we headed to the taping of The Men Tell All.  You were not allowed to bring cameras or phones into the studio, so we had to take one pic at the hotel before we departed at 11:30 AM… 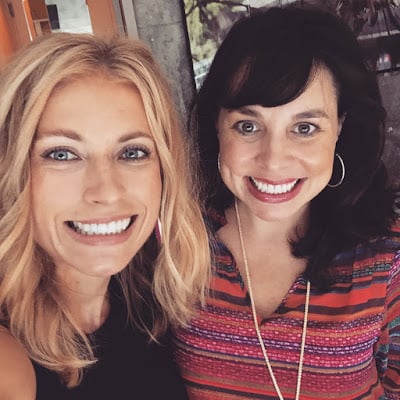 Headed out!
We arrived, signed our legal documents saying that we’re not going to spill the beans, went through security and then were allowed inside the studio.
The studio audience consisted of about 125 people.  They fed us lunch (Subway) and we hung out until it was time to be seated on the sound stage.  After we sat down, the stage producer explained how things were going to go that day, we then watched an advanced copy of Monday night’s episode (that we we knew what was going on) and then…they started the show.  The men were brought out, they told all, our lovely Bachelorette was brought out…she told a lot too.  And then…at 8:00 PM, we were released.  Yes, EIGHT HOURS LATER.  It was a really fun (yet long!) day!  We finally got back to the hotel around 8:30 and I felt like this… 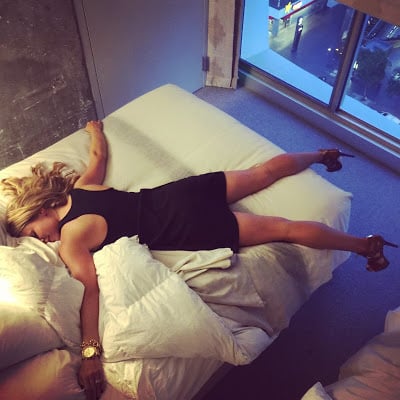 …emotionally drained.  Spent.  Physically, emotionally and mentally exhausted.
And pssssst: you can find my dress here (it comes in 5 colors and is less than $50!). 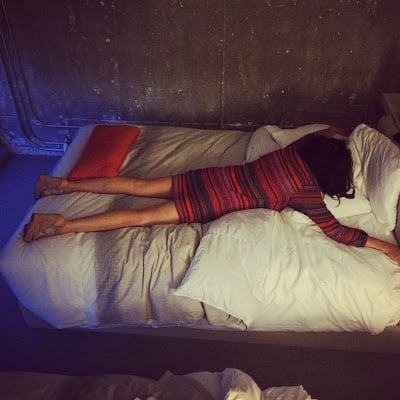 Sheaffer’s photo looks more like a crime scene picture!  The unfinished walls, lack of light and the angle I used look more scary than exhausted! 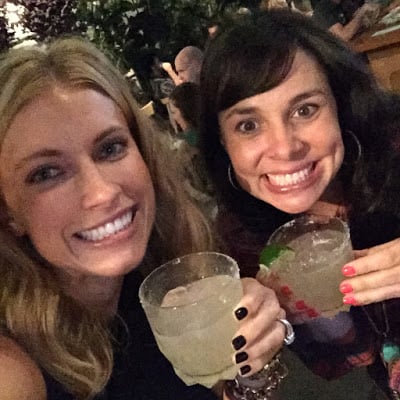 We rallied around 8:45 and headed to that farm to table restaurant for dinner!  We survived the taping!  Cheers to a great weekend!
Our alarm went off at 4:10 the next morning and we headed right back home.  Short, sweet and a whole lot of fun!
After the episode airs, I’ll throw in my two cents on what they edited/cut out and such.  It was such a fun experience and I’m super glad I did it.
By the way…I have no earthly idea how this guy did it back in the day… 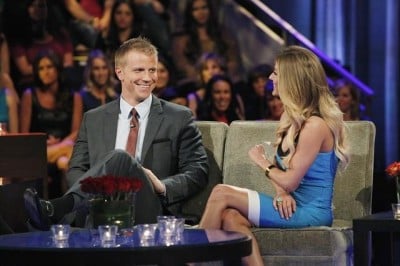 …I called him on Monday and told him that I was exhausted from just watching and didn’t know how he handled that (with a lot of grace I must say!) and he said he thought it was probably harder to sit still out in the audience all day :). 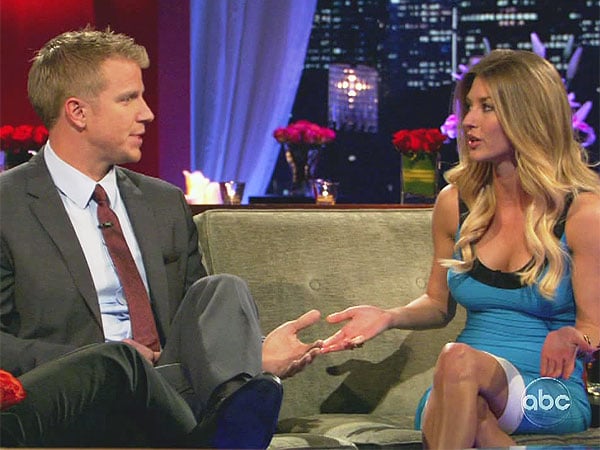 Never a shortage of drama within the Bachelor franchise.  Watch this Monday!
Last week, you ladies seemed to love my Greek Yogurt Popsicles so today… 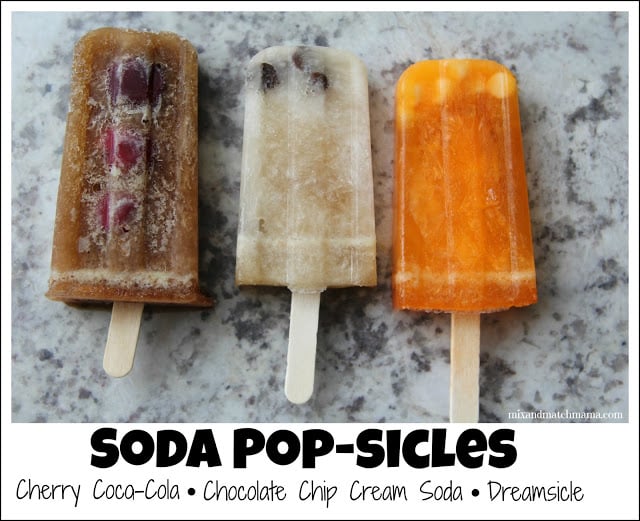