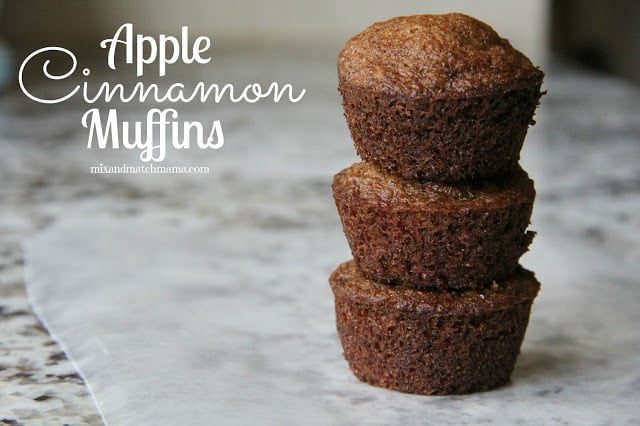 Apple Cinnamon Muffins.
Everyone needs a recipe for Apple Cinnamon Muffins, right?
These moist little bites are full of cinnamon and apple goodness…and oh so simple to make!  Whip up a batch and have one for breakfast, a snack or even dessert.  You can add them to a freezer bag and keep in the freezer too.
Apple. Cinnamon, Goodness.
Enjoy!

This recipe yields about 1 1/2 dozen regular sized muffins or about 35 mini muffins.

Shopping List
1 cup sugar
3/4 cup vegetable oil
2 eggs
1 cup all purpose flour
1/2 teaspoon salt
1 teaspoon baking soda
2 tablespoons cinnamon
2 cups grated apple (I used about 3 Fuji apples)
Preheat oven to 350 degrees.
Line 2 (12 count) muffin tins with cupcake liners or lightly spray mini muffin tins (this would make about 35 mini muffins). Set aside.
In a mixing bowl, beat with an electric mixer the sugar, vegetable oil and eggs.  Set aside.
In a separate mixing bowl, combine flour, salt, baking soda and cinnamon with a fork or whisk.
Slowly beat the flour mixture into the sugar mixture.  Beat until just combined.  Next, stir in your grated apple until just combined.
Divide batter between your muffin tins.
Bake muffins 14 to 16 minutes or until a toothpick inserted in the middle comes out clean.  If you’re using mini muffin tins, bake about 8 minutes or until a toothpick inserted in the center comes out clean.