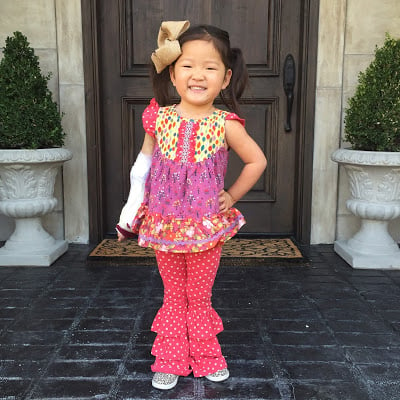 Ten months!
Ten months!
We’ve had our girl for 10 whole months!
We managed to pack a lot of fun, fall, fabulous things into this month.  We also managed to fit in a trip to NYC and a surgery.  Whew.  It was a doozy. 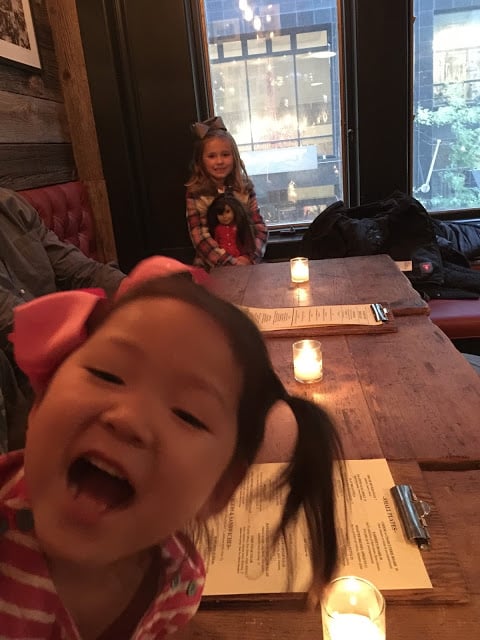 Here are some highlights from this month and then I’ll answer your questions from earlier in the week.
Well, we managed to teach Ashby all about Halloween, pumpkins and trick or treating.  She may not have all of her colors down yet, but she sure knows that if she says trick or treat on your porch, you’ll give her candy. 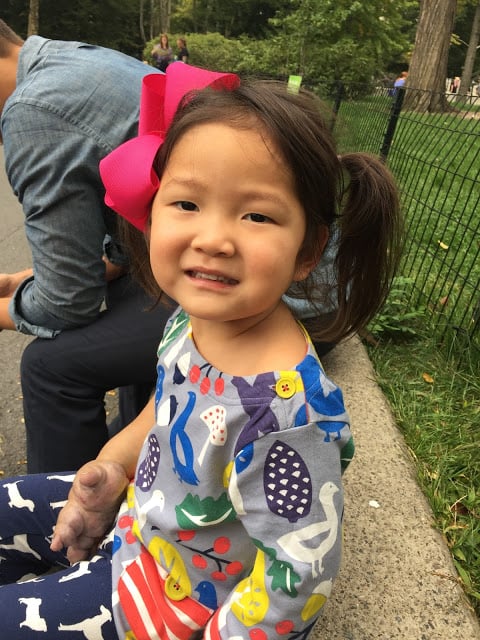 Ashby is all about “playing” this month.  She loves to take her babies places, love on them, rock them, kiss them and such.  She also loves playing dolls with Kensington, talking on her pretend phone, vacuuming the floor with her toy vacuum and stuff like that.  Ashby is also really good at playing independently when the kids are at school.  She’ll get her babies together, take them for a walk around the house with her stroller, feed them lunch and such.  She’s a good little mama.
That being said…she’s also picked up a new bad habit too ;).  Ashby is really testing us with the word no.  Ashby has learned to say no when she doesn’t want to do something…so we’re working through that.  Ashby has that three year old sass thing down this month. #luckyus  Disciplining and correcting children that have her background and have been through so much is tricky…but, we’re working on it. 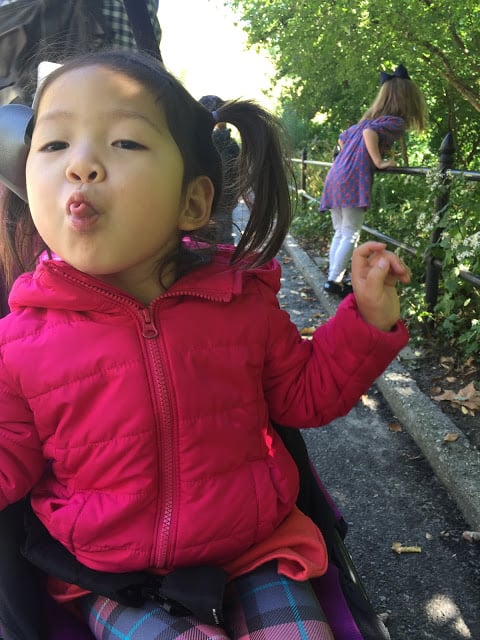 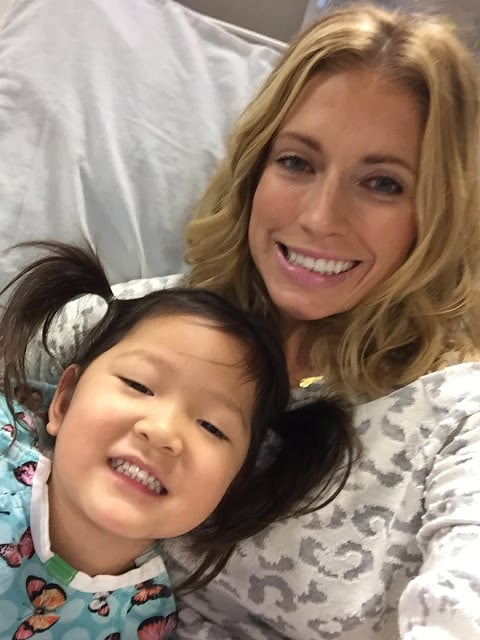 Today, we head back to see her doctor to (hopefully!) remove her cast and dressings.  At this appointment, we will also discuss physical therapy (if she needs any) and what happens next.  I blogged about Ashby’s surgery this month here. 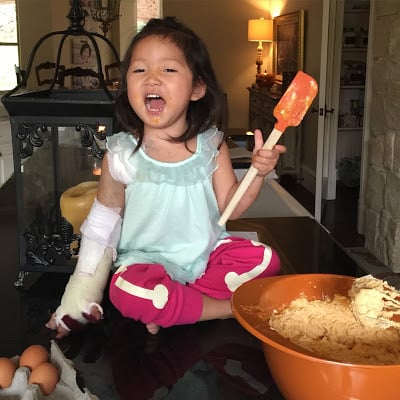 Because of the surgery, our month has been kind of crazy and we’ve been home-bound, but listen…this girl has been a trooper!  Not one time over the last two weeks has she lost her sparkle.  Ashby has just amazed me with her recovery! 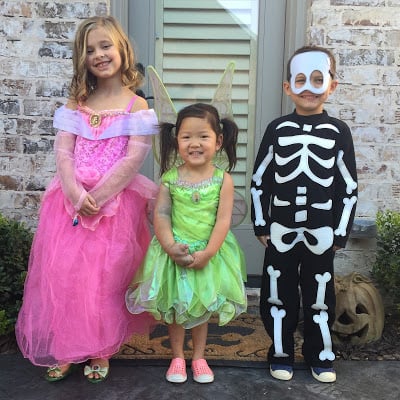 So, that’s a little bit about Ashby this month.
And for month 10, I thought I’d do a little Q&A.
I get a lot of questions about our adoption, so I thought today might be a good time to answer some of them.  I loved this because you guys are asking THE EXACT same questions I asked my friends before we adopted.  We asked every single one of these questions.  These are honest, sincere, and genuine questions.   I really tried to answer every question that was asked.  I hope this helps some of you who are considering adoption! 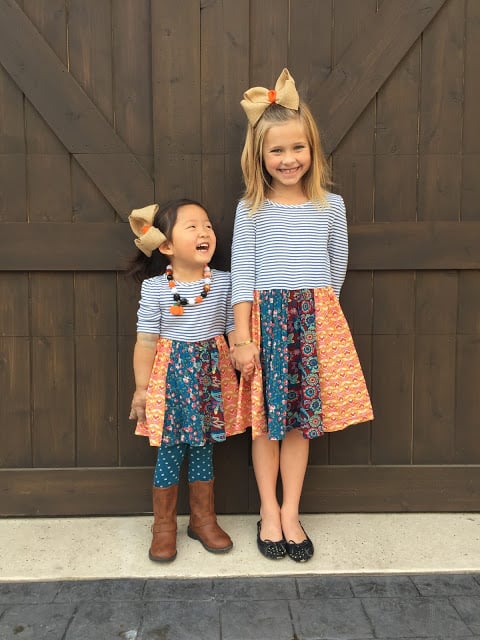 6. How long did the process take from start to finish?
That varies depending on a wide variety of things…but for us, it took 18 months and 5 days.  From very beginning to the day we got her was 18 months and 5 days.  I was told to expect it to take between 12 and 24 months…and well, there you have it…right in the middle.

7. Were we able to send stuff to Ashby once we were matched?
That’s a case by case situation depending on the orphanage.  We sent some things but the only thing I for sure know she received was our pictures.  You can send stuff…but you don’t know if your kiddo actually gets it.

8. What’s been the hardest part since we’ve been home?
For me, it’s been “where to start?”.  Ashby was like this blank canvas who didn’t know anything.  It was overwhelming to know where to begin.  Do I begin by teaching her numbers? Colors? Family relationships? Do I need to teach her body parts in case one of them hurts? Do we do puzzles? Color? Play-Doh? Do I just need to sit and read to her?  Do I need to play with the tea pots? The stuffed animals? Where do I begin????  Help!

Yes.  That’s how I felt.  She was sweet and easy going…but there was just so much for her to learn…and it was up to me to teach it to her.  That was very overwhelming to me at first.  I finally had to just let it go and realize that she’ll get it when she gets it.  I needed to just be her mommy and love on her.  Right now, she can tell you that she wants to color and eat Goldfish crackers while watching Peppa Pig on the iPad…but she cannot tell you which is the blue crayon…I mean, it’s all a work in progress.

9. How did we work on attachment?
Well, we didn’t give her much choice.  At first (back in China), she was very nervous around Andrew.  She didn’t mind him picking her up off the ground, but she didn’t want him to take her from me.  How did we work through that?  He took her out a lot by himself.  At first, she would cry the entire time, but after a few days, she started enjoying going out with Andrew.  We just worked through it.  We were going to bond with that girl whether she liked it or not :).  She might have cried and not made eye contact, but we didn’t take it personally…we just kept on loving on her.

10. Does Ashby remember the orphanage?
I don’t think so.  We have a lot of pictures from the orphanage and just the other day, we showed them to her and she seemed completely oblivious.  We even showed her pictures of the orphanage workers and she acted like she had no clue who they were.  She left the orphanage when she was 2, so that’s understandable.  Two is really young to remember.

11. Things we’re saving to tell Ashby.
Well, as much as I love sharing my life with you…we do keep some things private around here ;).  We have three pictures of Ashby from when she lived in the orphanage that we are keeping private along with the name she was given there.  We feel like Ashby needs to see and know that stuff first when she’s ready.  We also took additional pictures of the orphanage that we’re saving to show her when she’s older.  My prayer is that I’m encouraging other families to consider adoption (of any kind!), so I’m always very happy to share our story with you…but that being said, some details we keep private because Ashby Shull deserves first look at that stuff.

12. The ugly stuff.
I mean…part of me wishes I had some ugly stuff to share with you because I think you really want to hear it, but honestly, it’s going really well.  At the beginning, I kept saying “well, this is just the honeymoon phase of adoption” and then finally one day my friend Jennifer (who has also adopted) told me to stop saying that because it wasn’t the honeymoon phase anymore, it was just going well and that’s okay to say.

Now…we’re doing great right now.  Our big kids have adjusted really well, Andrew, Ashby and I have adjusted really well.  This has been a very positive experience for us.  That being said, it’s not always going to be sunny and happy.  One of these days, it could hit Ashby like a ton of bricks that she’s adopted.  She could grieve.  She could be mad.  She could be sad.  She could rebel.  One of these days, she might not like being a Shull.  She might not like being adopted.  She might not like being American.  I don’t know what the future holds…I can just speak about the present.  At this moment in time, I have a very happy, well-adjusted little three year old girl without a care in the world.  My prayer is that she continues to feel that way…but if one day she doesn’t, then we’ll handle that too.  Just because the ugly stuff hasn’t happened yet doesn’t mean I think it’s never going to happen.  It just hasn’t happened yet.

13. What do I wish I would have known going into adoption?
Hmmmm…I went in preparing myself for the worst and hoping for the best.  That being said, I wish someone would have told me to relax a little more.  I’m relaxed about it now, but at first, I was too overwhelmed with the “to do” list.  She needed a good doctor (or three), she needed to learn English, she needed to learn how to communicate pain to us.  She needed, she needed, she needed…no.  All she really needed was a lot of love.  I’ve learned over the last 10 months that she’ll eventually learn to count to five or be able to identify a dog verses a cat…what she needed from day one was just lots of love.  Love is the key.

14. How have Kensington and Smith handled this?
Listen, I did not give these two kids enough credit.  All of those years I spent praying about my calling and Andrew’s calling…I never prayed and asked God about Kensington and Smith’s calling…but you know what, he equipped them despite my lack of prayer.  Sheaffer says this all the time, and I appreciate it when I hear it, but Kensington and Smith have done such a phenomenal job with all of this.  God really prepared their young hearts for all of this.  My big kids are extraordinary and I’m so anxious to see how God uses this experience to shape them into adults.  They were young when we started the process (3 and 4), so they didn’t really say much about it.  They were excited but they didn’t really understand…now, I can see exactly how God used this situation to shape them.

15. How do we incorporate Ashby’s heritage into our family?
Right now, we’re starting small and building.  Our main priority this year is for Ashby to feel like a Shull…to feel like she’s home and with her family.  Now that she feels comfortable with us and in our family, we’re starting to incorporate more of her background into our daily conversation.  For instance, now, if you ask Ashby who’s Chinese, she’ll  grin really big and say “me”!  She also does the same thing if you ask her who’s American ;).

We’ve recently started showing her pictures from China and talking more about how special it is that she’s Chinese.  We didn’t want to do these things in the beginning because that wouldn’t help with attachment to us.  We plan on traveling back to China sooner rather than later, celebrating the Chinese New Year and trying to incorporate bits of the Chinese culture into our own family.  After all, we love China…China gave us this precious girl…we want to celebrate it!  Also, we have a Chinese church within our church and Ashby is in a Sunday school class with five other Chinese girls, so hopefully she’ll continue to grow up in our church where we have a large Chinese population and can have friendships with these girls.  We are so blessed that China was open to our family adopting one of their children, so we have nothing but respect for them and hope Ashby grows to as well. 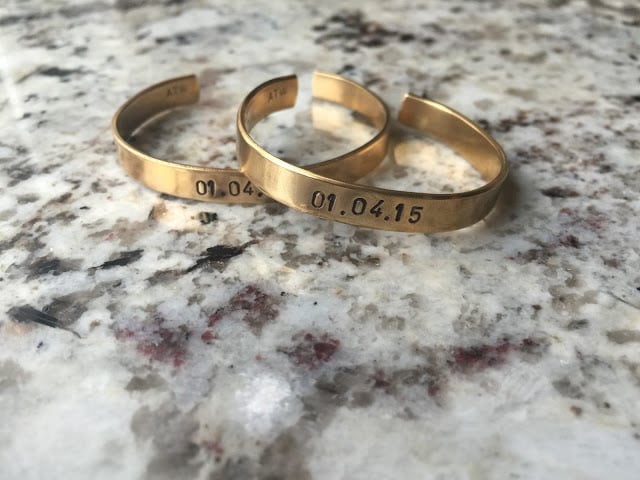 The date we met our Ashby.  To see the story behind these bracelets, click here.

Whew!  Okay!  Lots of questions!  My prayer is that one or more of you will be inspired to adopt.  I just cannot say enough about this experience.  It’s been such a blessing to us.

And for dinner tonight… 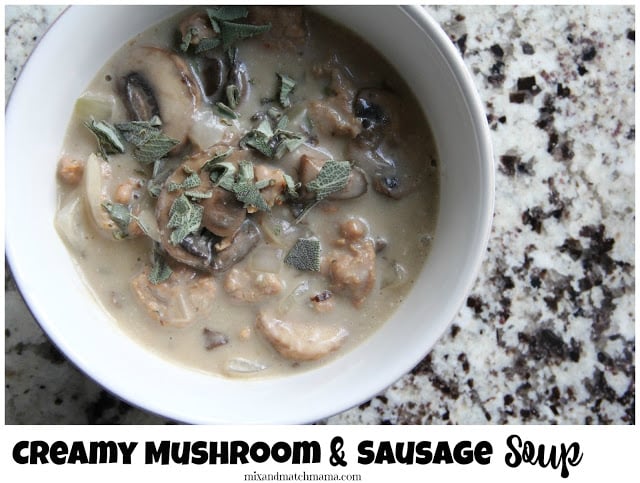