Otherwise known as the first day of post-season baseball for the Boston Red Sox.

Otherwise known as my favorite time of year.

Otherwise known as do not try and contact me tonight via phone or text because I will not be taking my eyes off of the TV.

Otherwise known as I AM SO NERVOUS ABOUT POST-SEASON BASEBALL!

We have kicked the jet lag, we have settled into a nice little routine, we have found our sweet little smile and we have even taken a quick trip to meet our Missouri family.  It has been a great life lately! 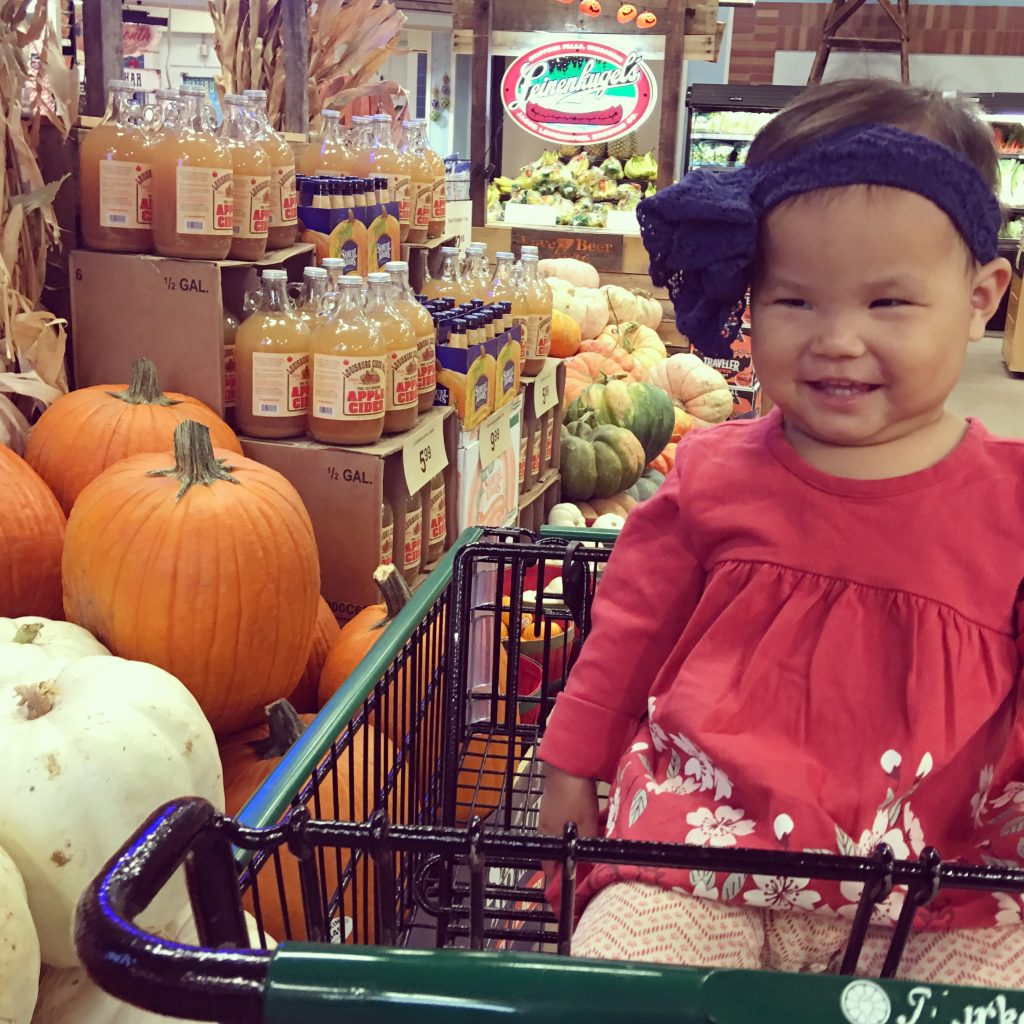 Madeley has now been to the grocery store with me twice and Andrew once and she is all smiles!  She points, she laughs, she giggles and she smiles. 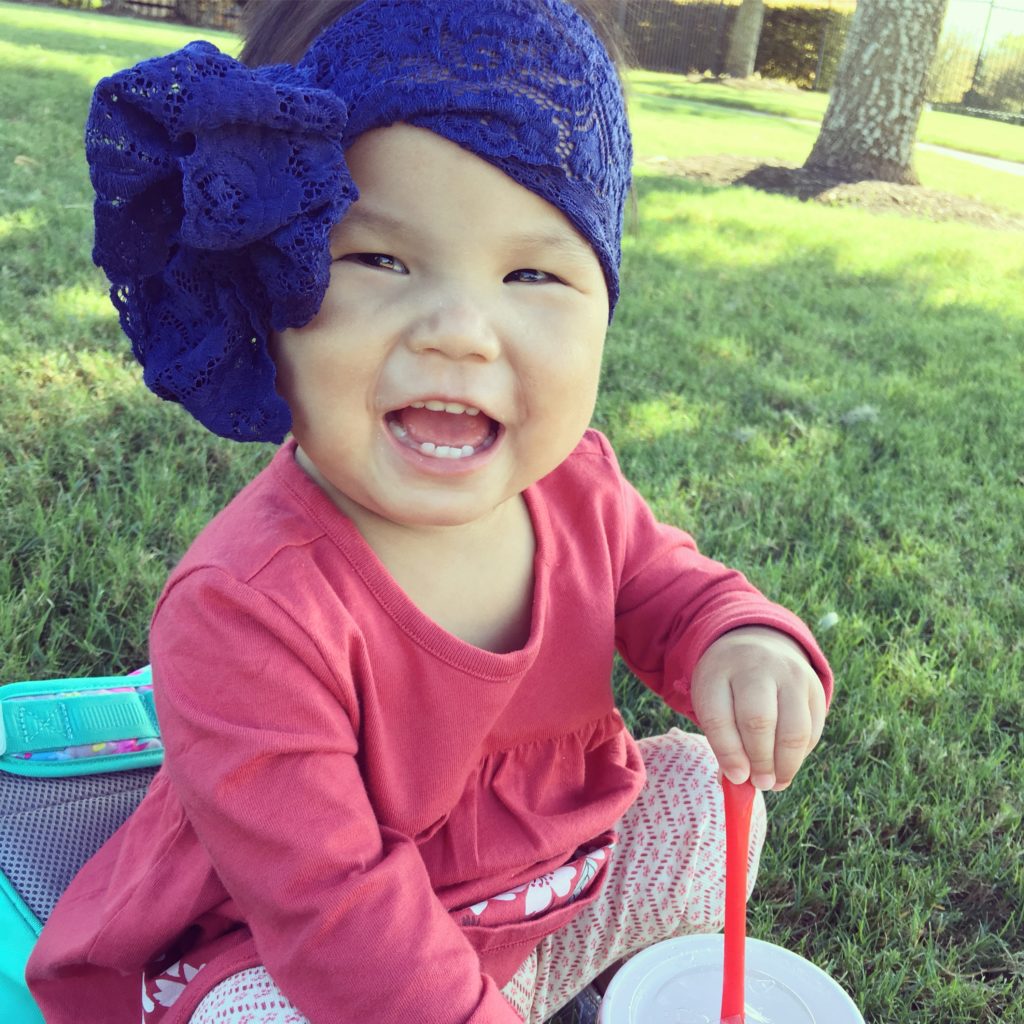 It was my turn to take Kensington and Ebby Lee to tennis, so Madeley and I went out and sat in the grass and watched them.  She had the best time playing in the grass and drinking water from my straw.  It was a special little hour watching my big girl play tennis and my littlest girl play next to me on the grass. 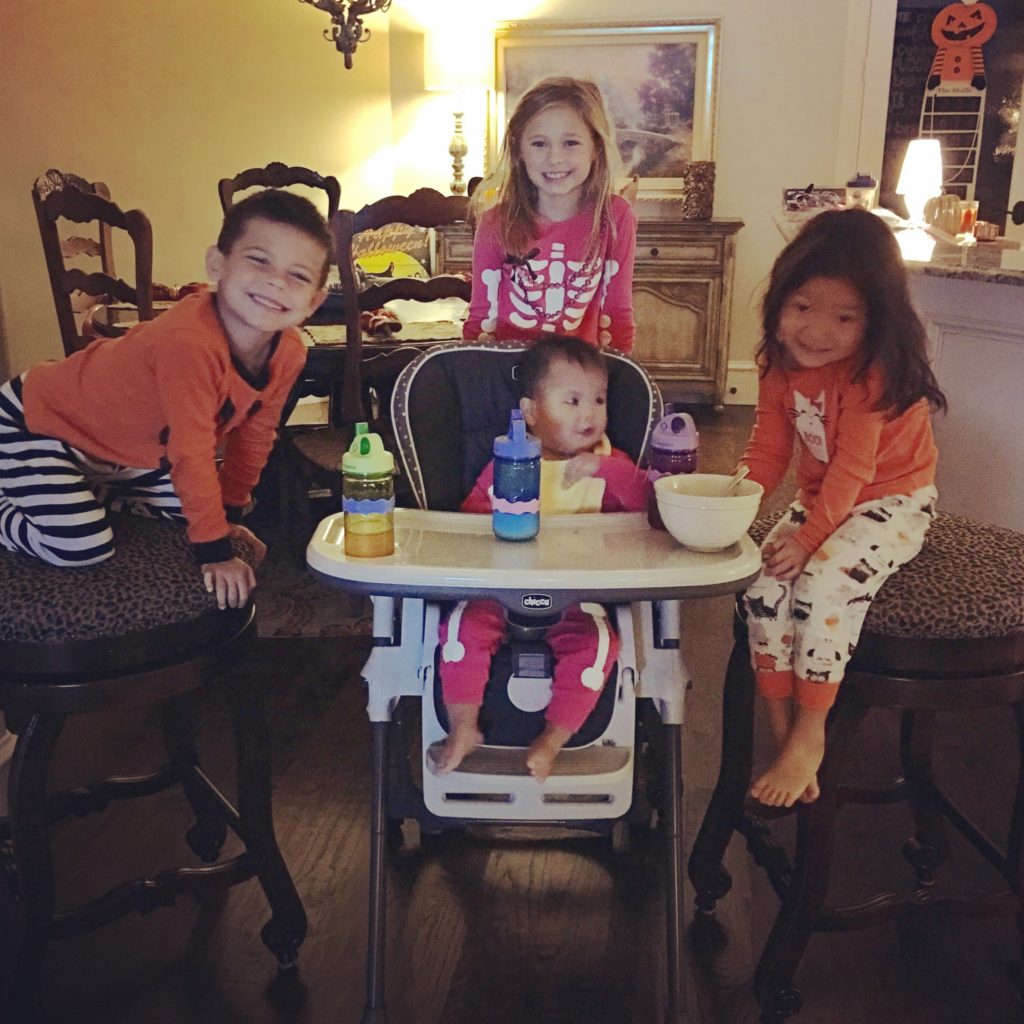 I came out of the pantry on Friday morning and found the three big kids like this…all huddled around Madeley watching her eat breakfast.  She is currently their favorite form of entertainment. 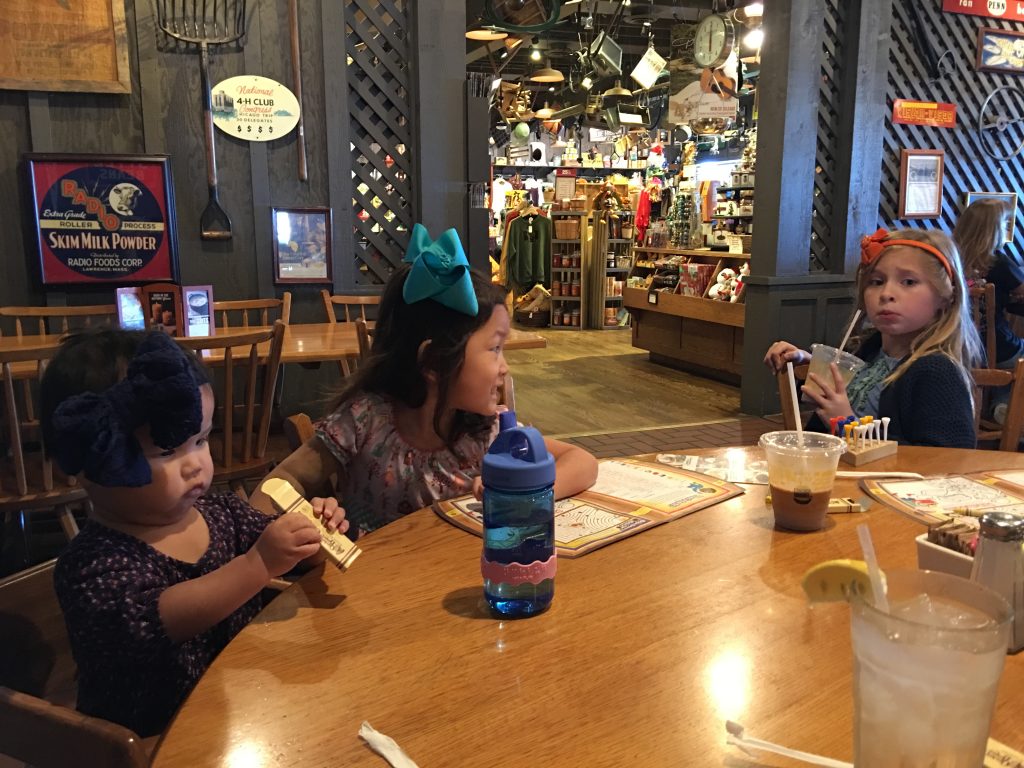 On Friday afternoon, we made a quick trip up to Missouri for the weekend.  Along the way, we stopped for a bite…just a bunch of silly kids waiting on their food. 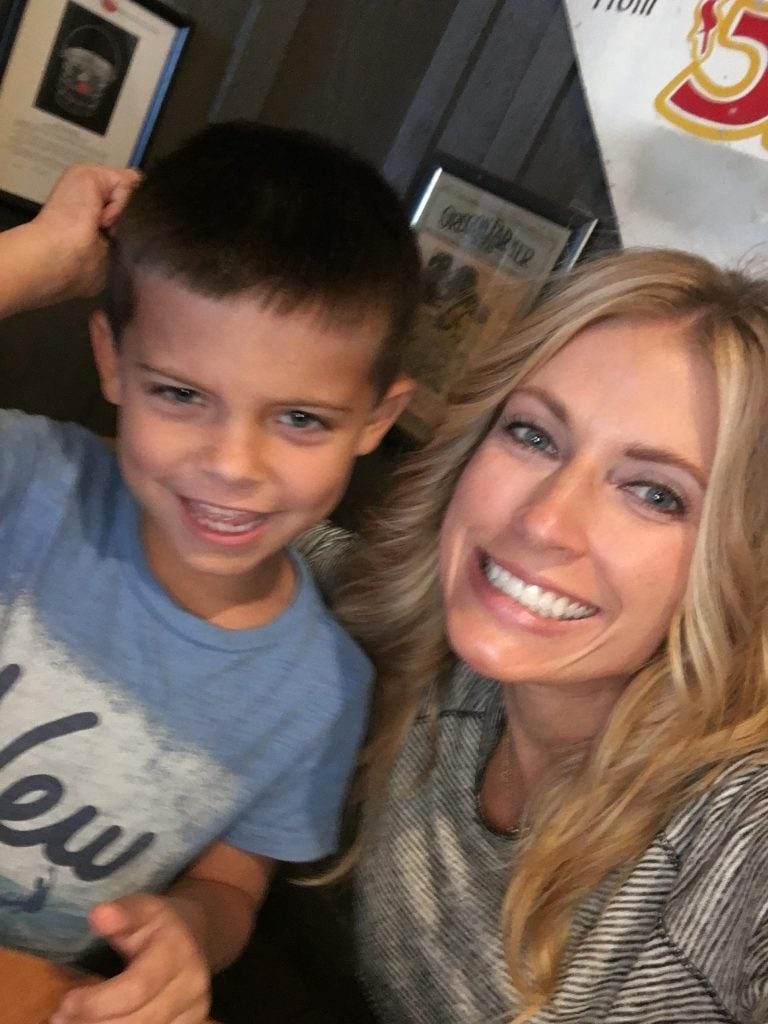 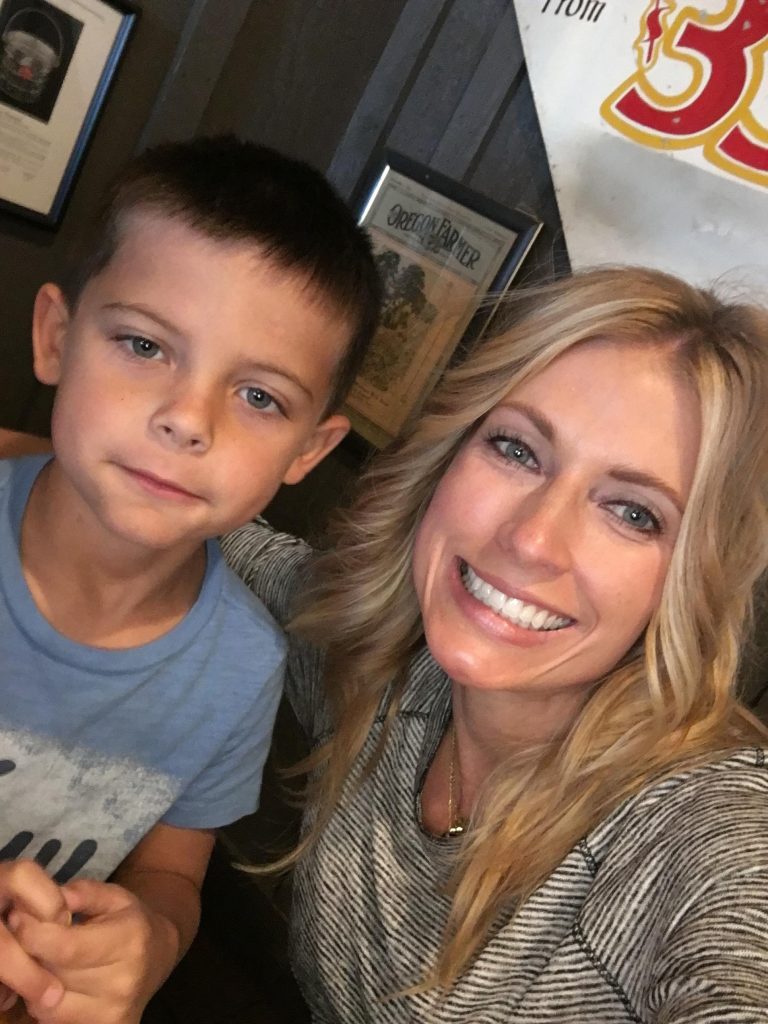 …two things to note:
1. I love my little t-shirt here.  It’s super comfy and I’ll probably be wearing it a lot this fall (plus it’s 40% off today!).
2. Because I have the world’s most sensitive stomach, I of course, was car sick just a little bit after this. #theregoeslunch #uggggg 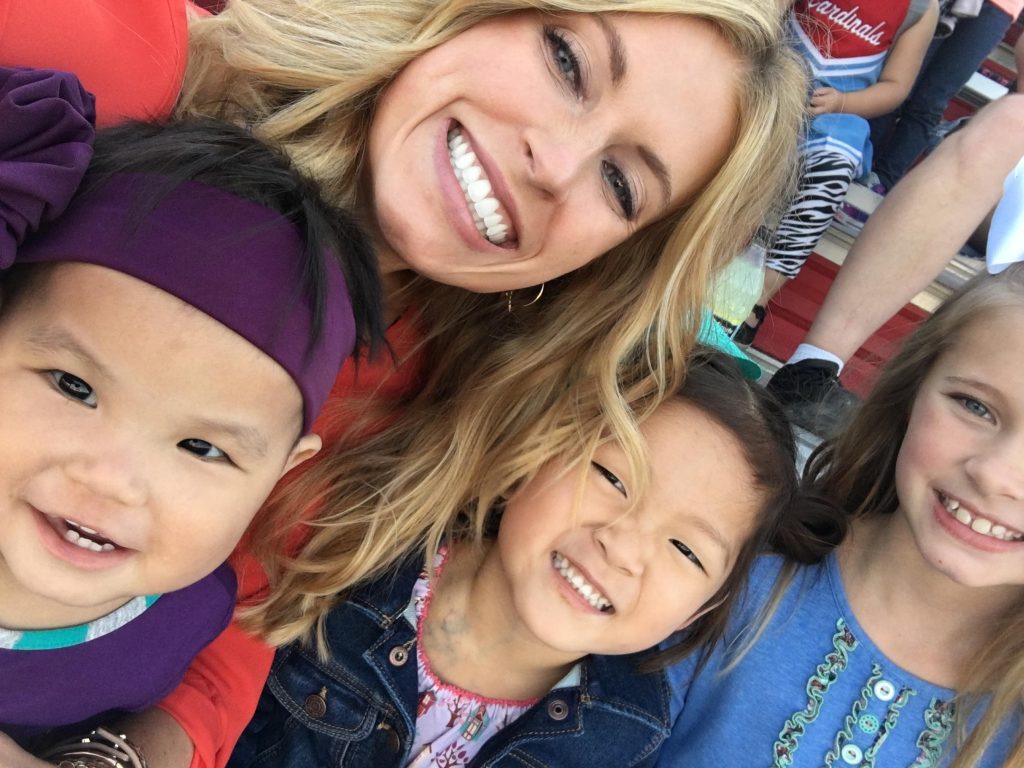 We made this road trip to Missouri because Andrew was being inducted in the first class of his high school’s hall of fame.  This was such a big honor for him that we couldn’t miss it.  Plus…this meant family time with the Missouri Shulls, so it was win, win!  Here I am with my girls at the football game. 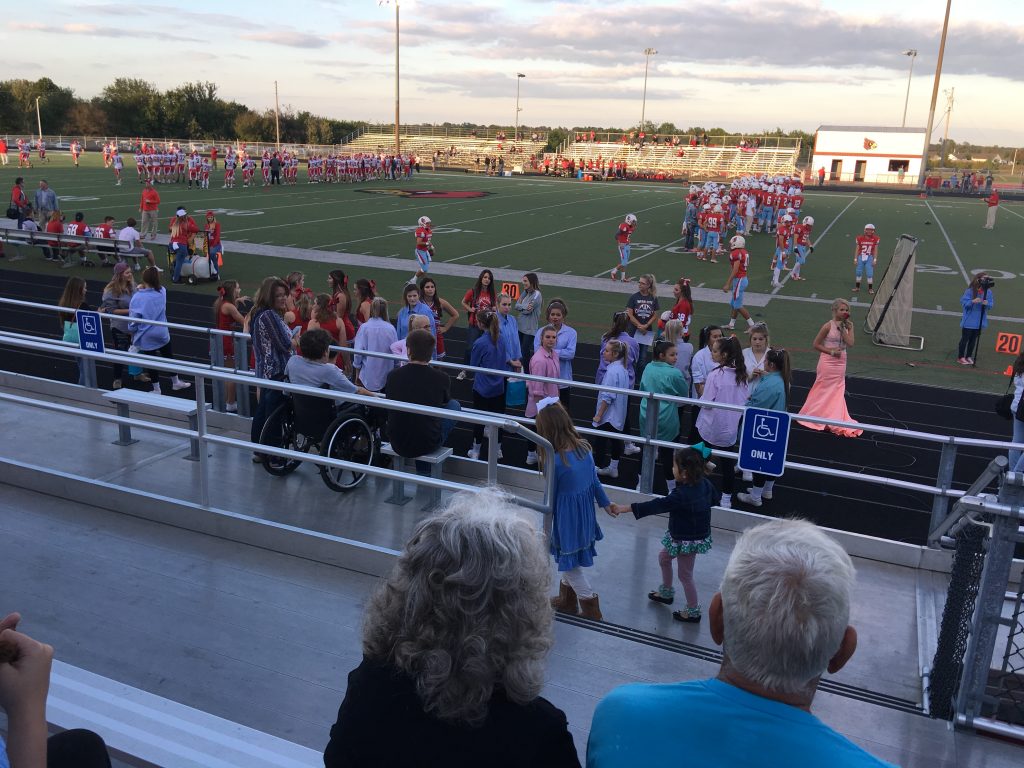 My girls wanted to go say hi to the cheerleaders “by themselves” because you know…they’re so big and all 😉 .  Funny story, I was asking the girls what they wanted to do in high school.  Did they want to play an instrument and march in the band?  Be on the dance team?  A cheerleader?  Play a sport?  And Ashby pointed to the girl in the coral dress and said “I want to be a princess”.  Ha!  That girl was in the homecoming court.  All of this to say, if you’re looking for Ashby come high school, she’ll be the one in the tiara. 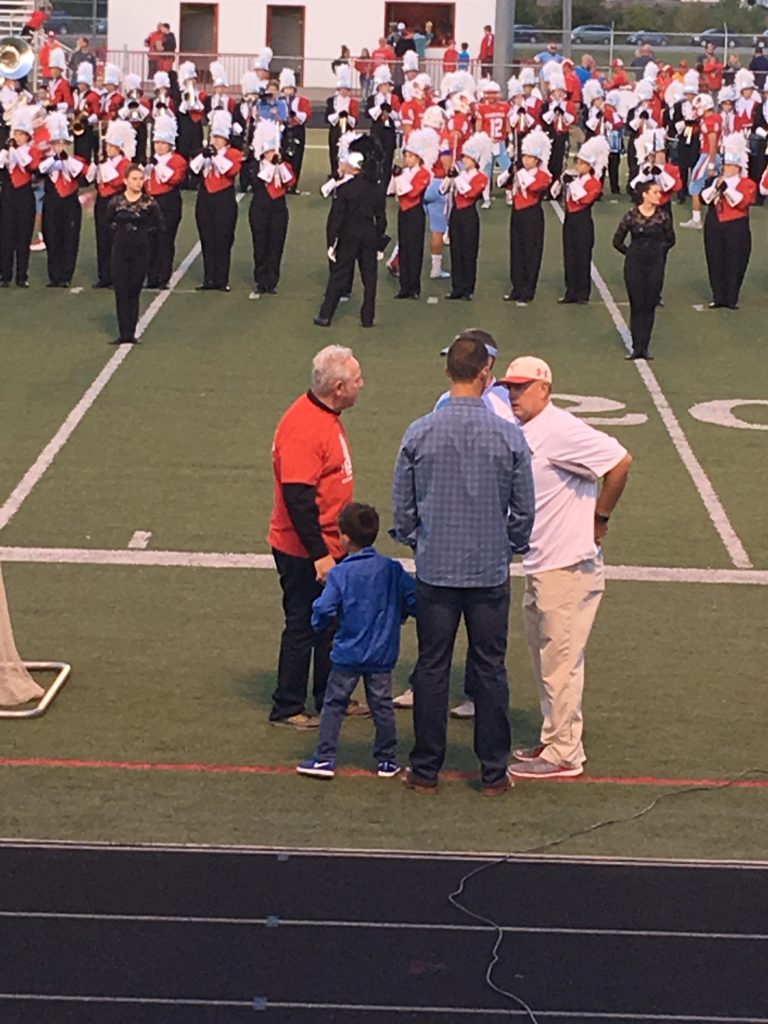 Andrew and Smith on the field before the game.  I’ve blogged about Coach John Roderique before…but not only is he the winningest coach in Missouri high school football by percentage, but he’s just such a good man.  Andrew and I both think so highly of him.  He too was inducted into the Hall of Fame and I can’t think of anyone more deserving.  (And all the Webb City folks said “Amen!”.) 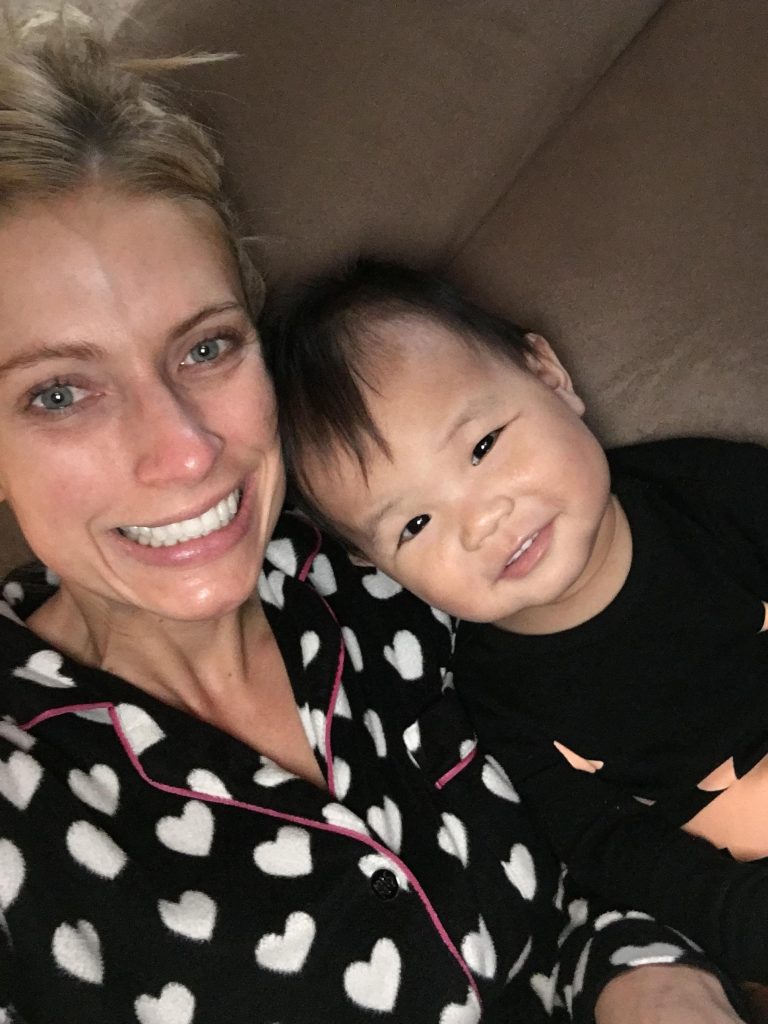 The next morning, we slept in and cuddled. 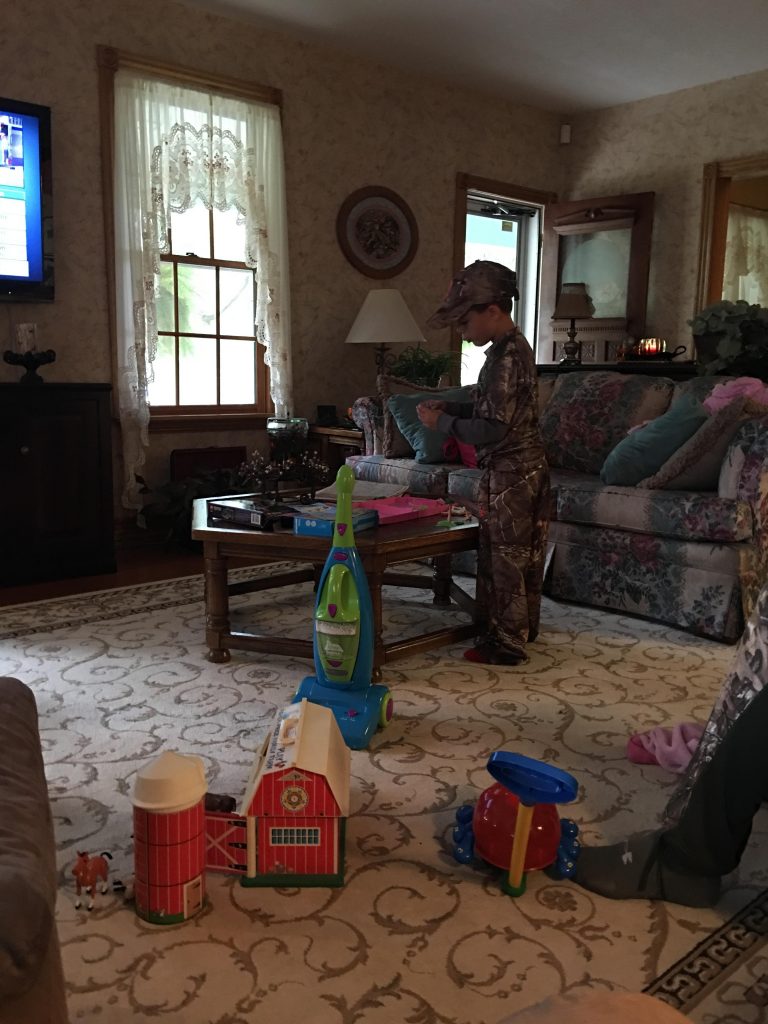 Well, some of us wore our hunting gear and built Legos.  You know you’re on a farm when you’re in head to toe camo. 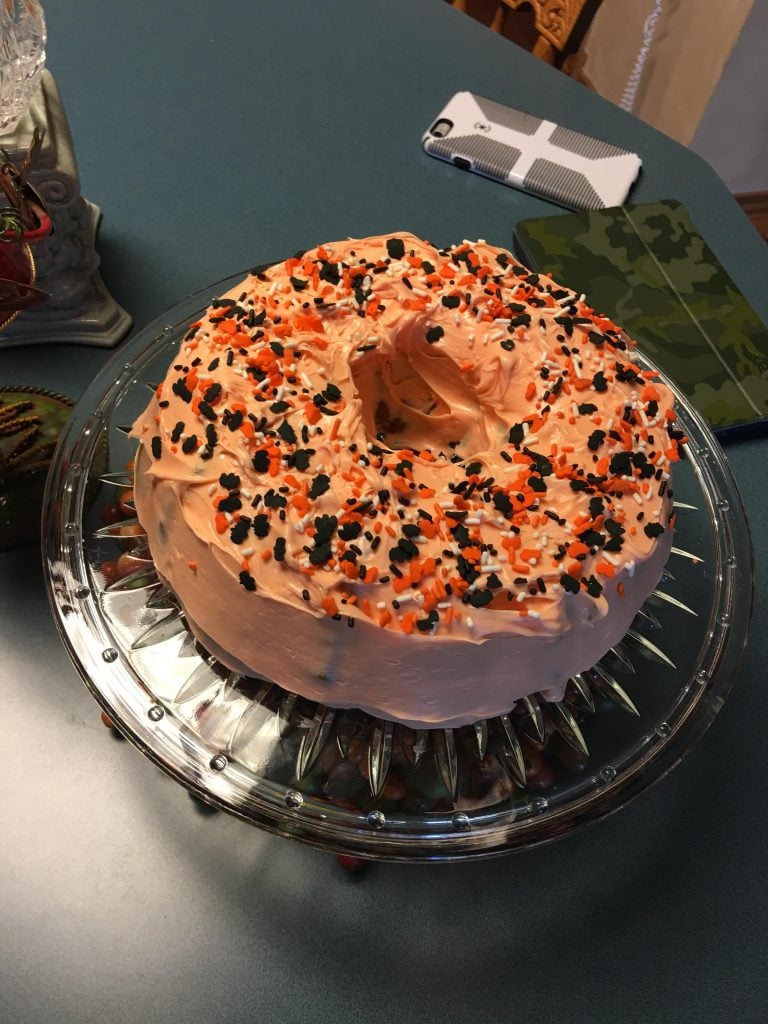 Look what my sweet mother-in-law made!  She made my very favorite bundt cake (it’s my favorite out of 101!).  This is the PERFECT time of year to make my Pumpkin Spice Latte Bundt Cake.  She just turned her frosting orange and added sprinkles for a nice Halloween touch.  It will always be my very favorite cake. 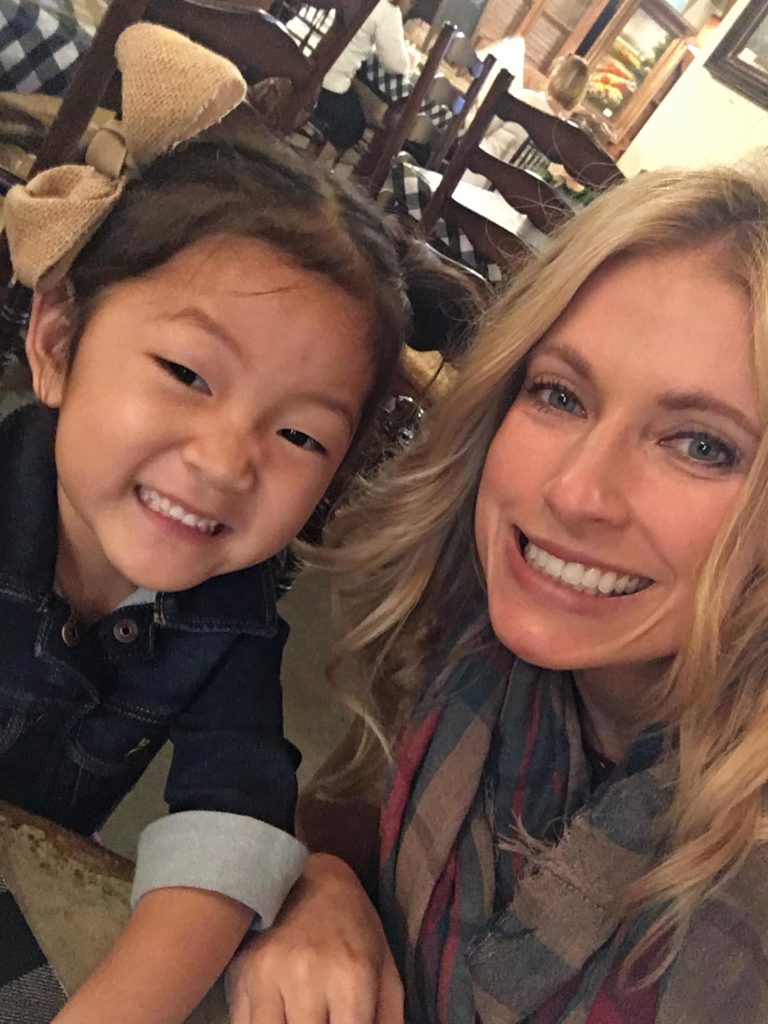 Out to lunch with my peeps.

(And pssssst: that’s that scarf I’ve had for 3 years in a row and just can’t stop wearing.) 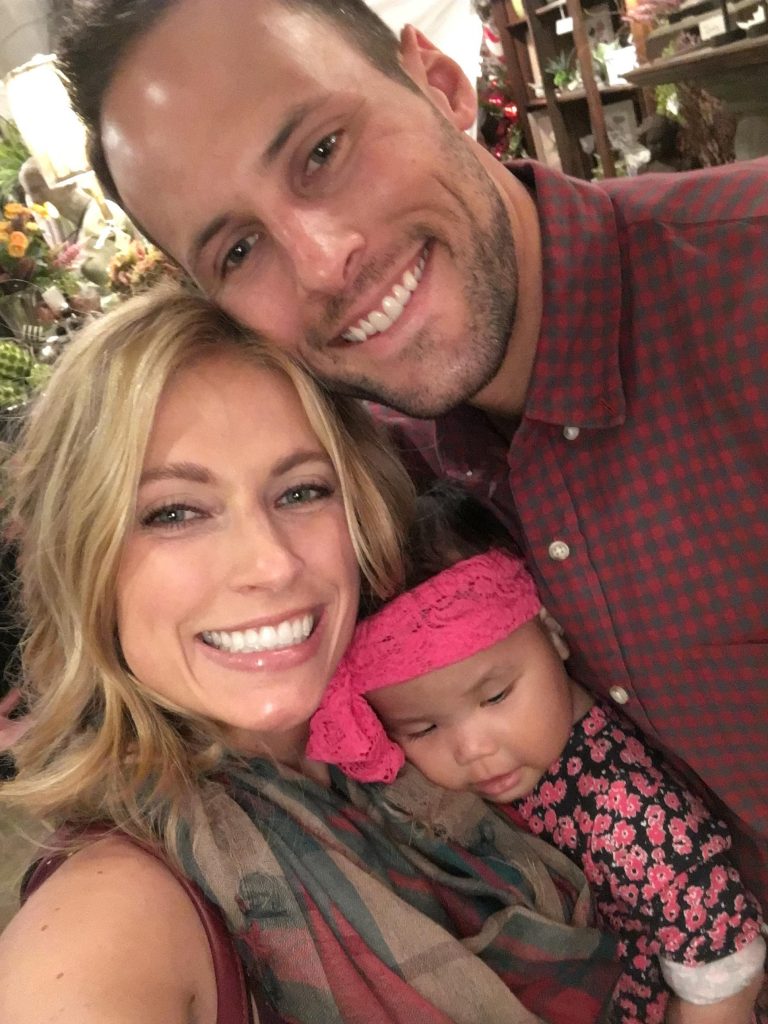 It was a Madeley sandwich. 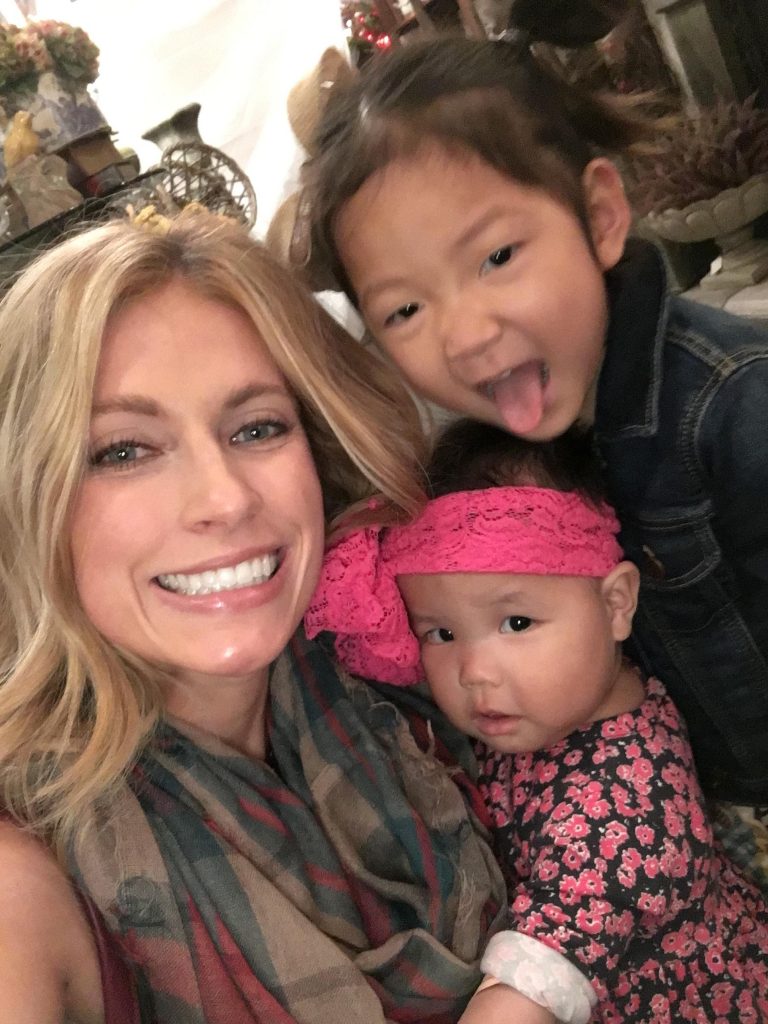 And of course, Ashby wanted to make a Madeley sandwich too 😉 . 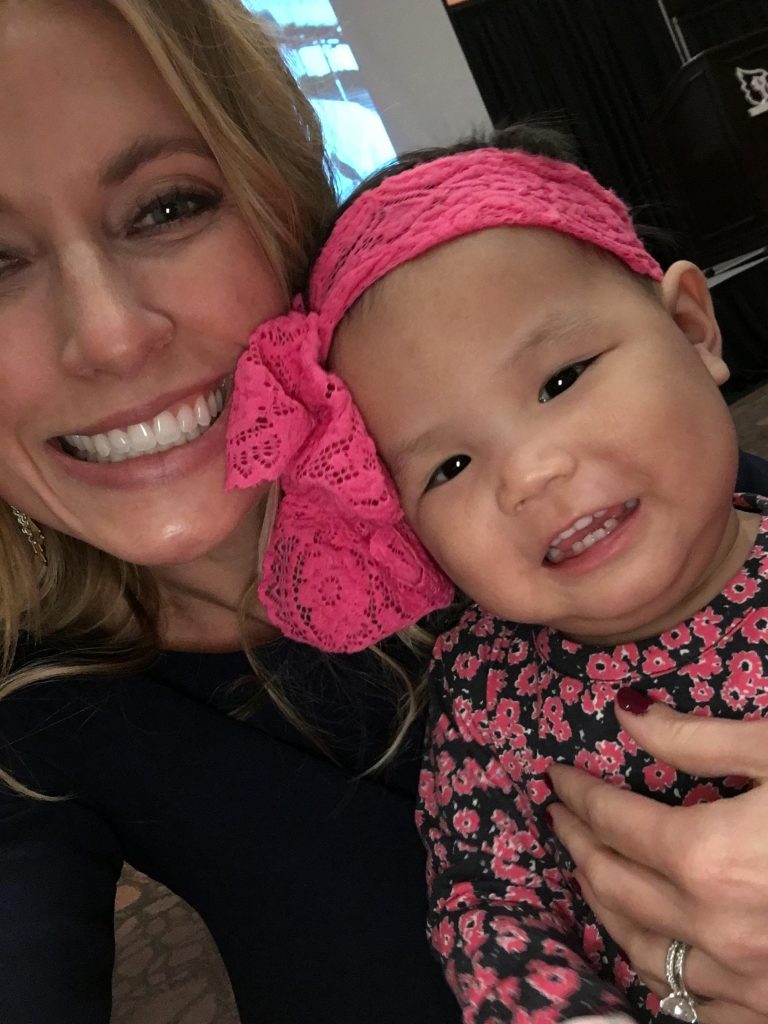 So, the awards banquet for the Hall of Fame was on Saturday night and of course, Andrew and I brought along our favorite little date (and my father-in-law too!).  Nanny (Andrew’s mom) stayed at their house with the three big kids where they tell me they “had the best time ever”. 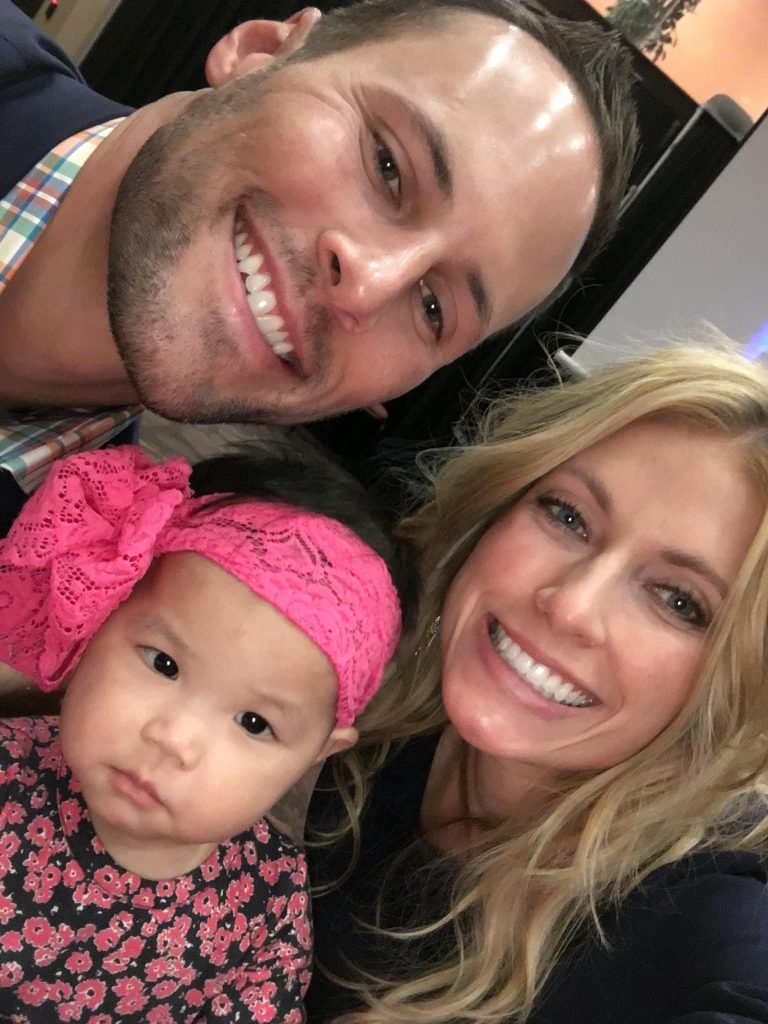 She was so sweet at the dinner.  She had brisket for the first time and couldn’t get enough! 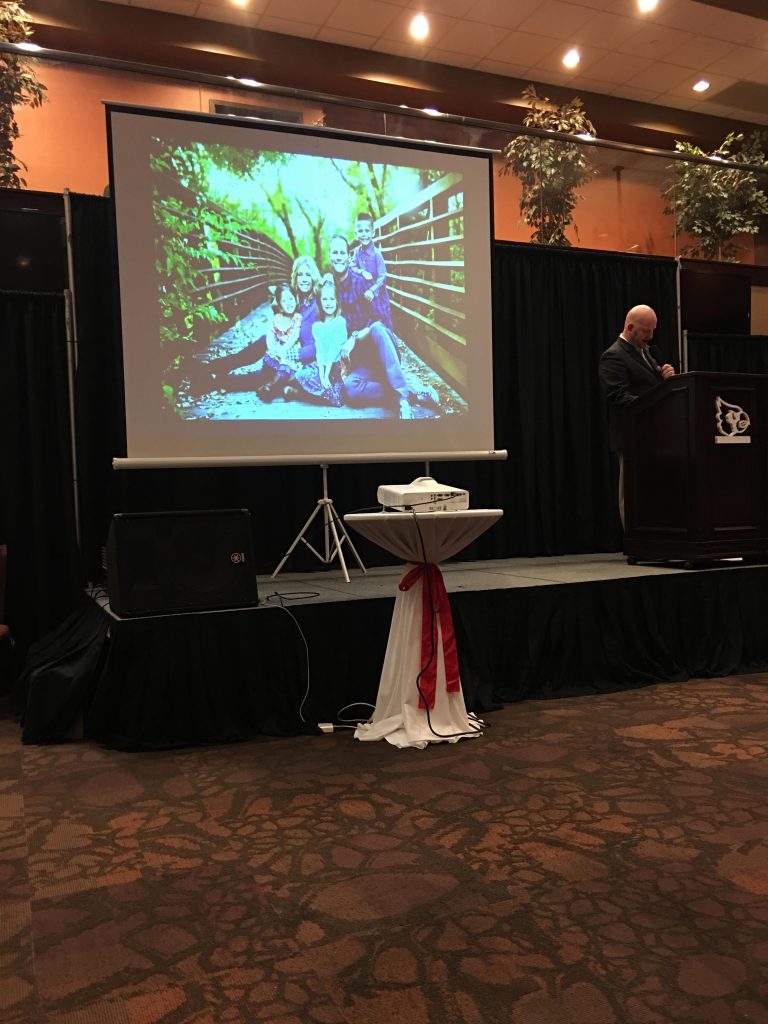 They announced each inductee individually, so here they are announcing Andrew and reading off his stats (I’m not sure why they didn’t include best husband in the world because that’s his best stat!). 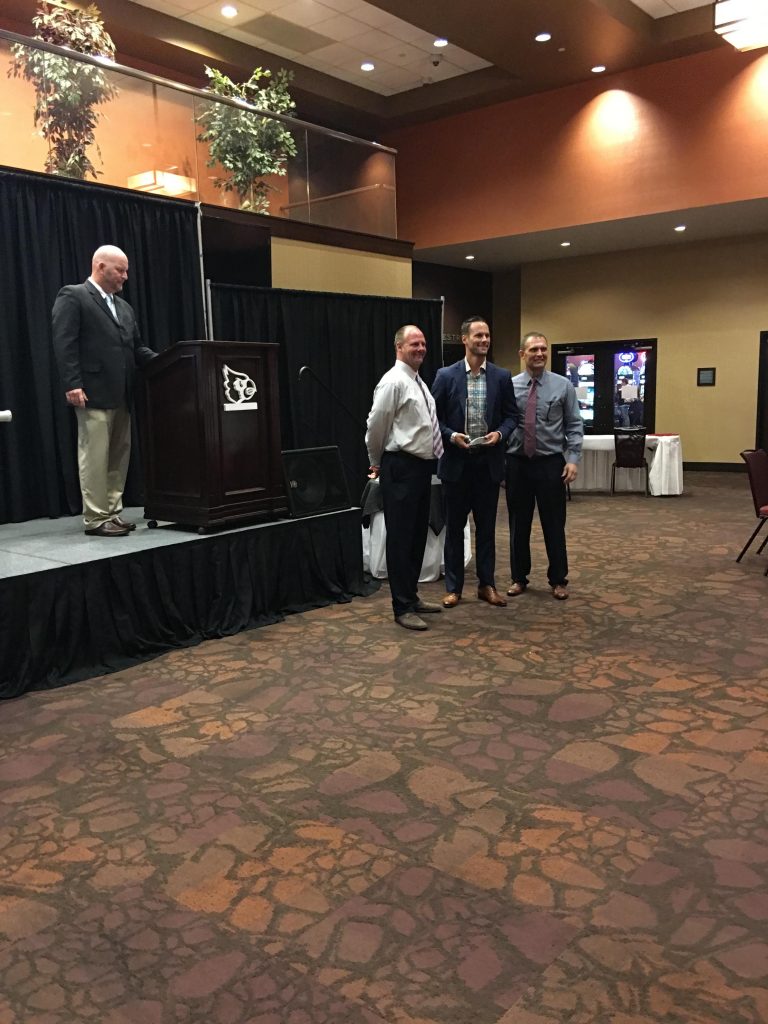 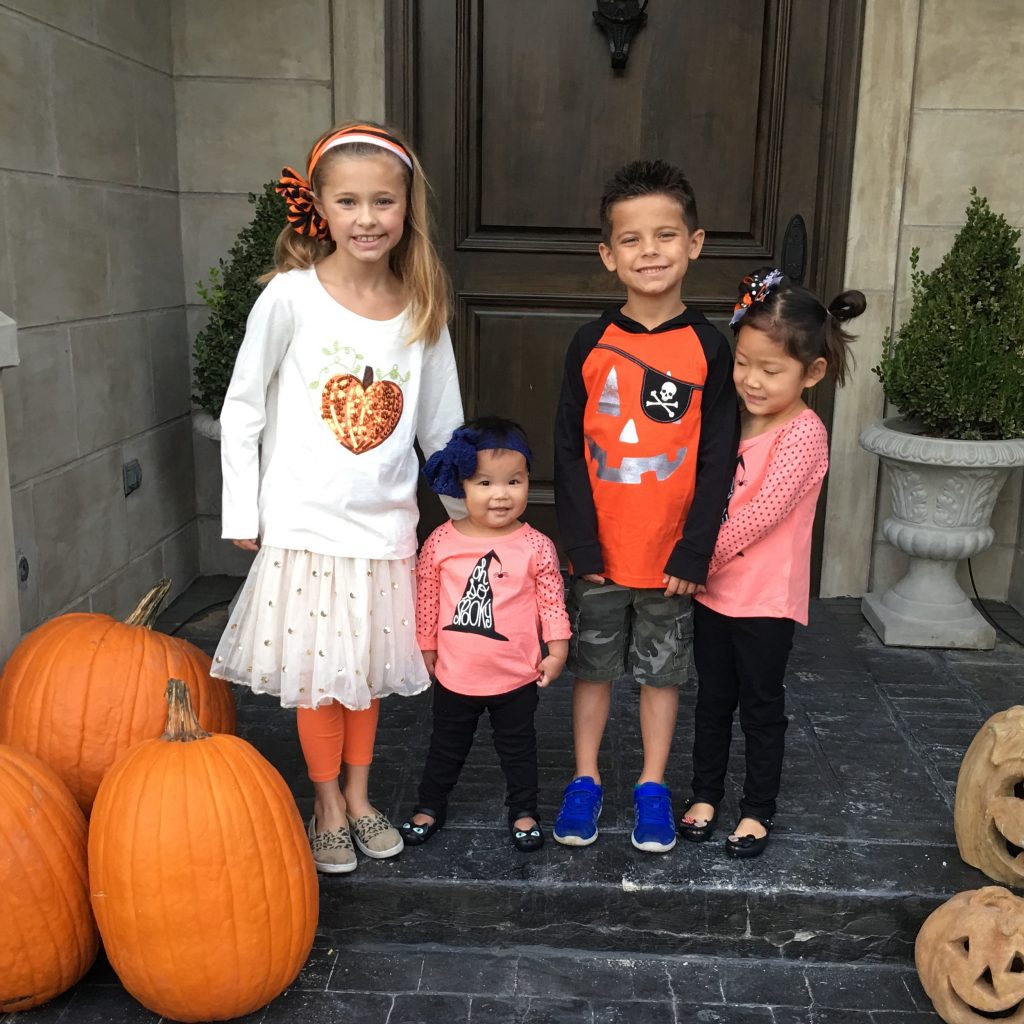 And then we were back home by Sunday afternoon and up ready for school on Monday.  These four make me so happy.  There was a time not that long ago (that I remember so vividly) where I really thought I would never be a mom…and now look.  God is good.  He knows exactly what you need when you need it. 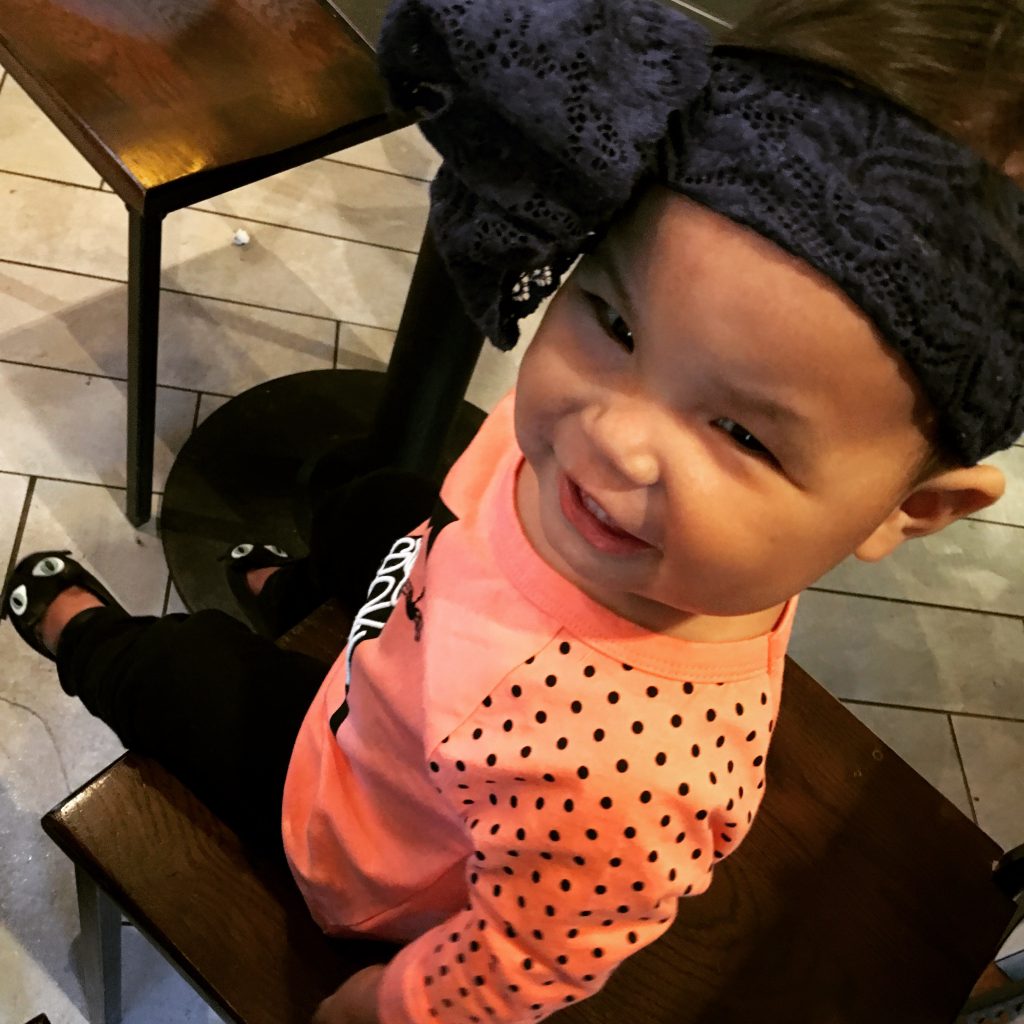 Madeley and I enjoying our Starbucks date together. I miss the big three when they’re at school, but it’s fun to have all of this one on one time with just Madeley. 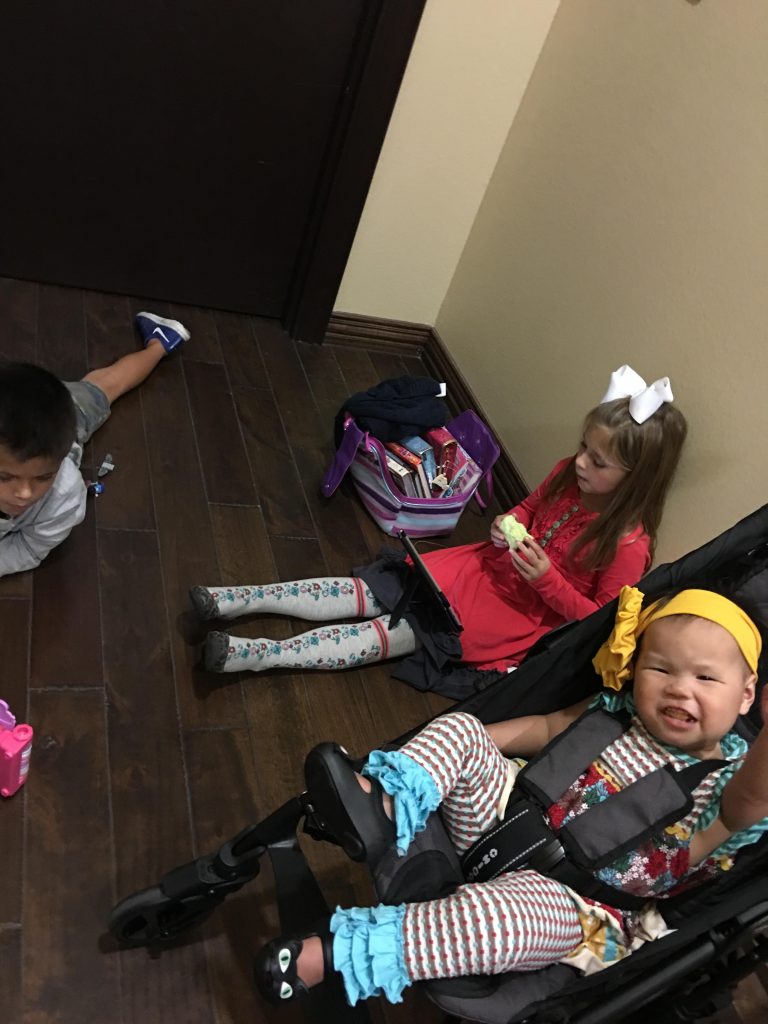 I mean…a picture of my life.  Ashby was in with the speech therapist and the four of us were waiting out in the hall.  Smith was building Legos on the floor, Kensington was watching a movie and eating an apple and Madeley had a goldfish in her mouth squealing for more.  I read a book and just hoped no one tripped over us walking by. 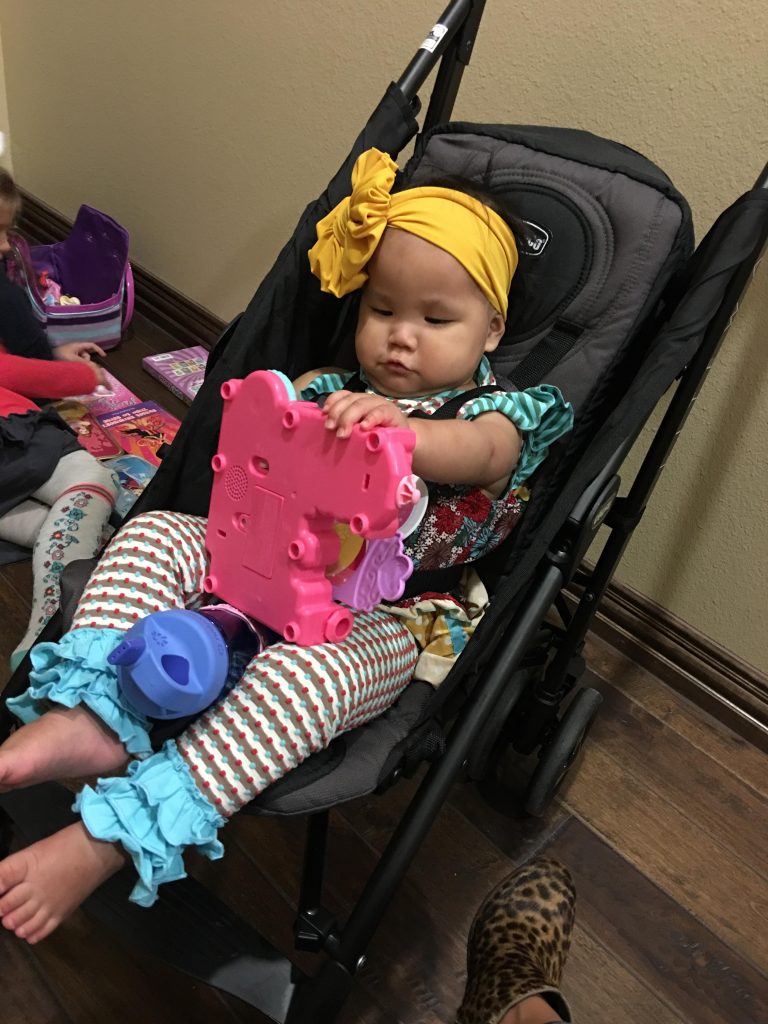 After her goldfish were done, Madeley “read” too.  It’s a talking/light up/very loud and happy baby “book”. 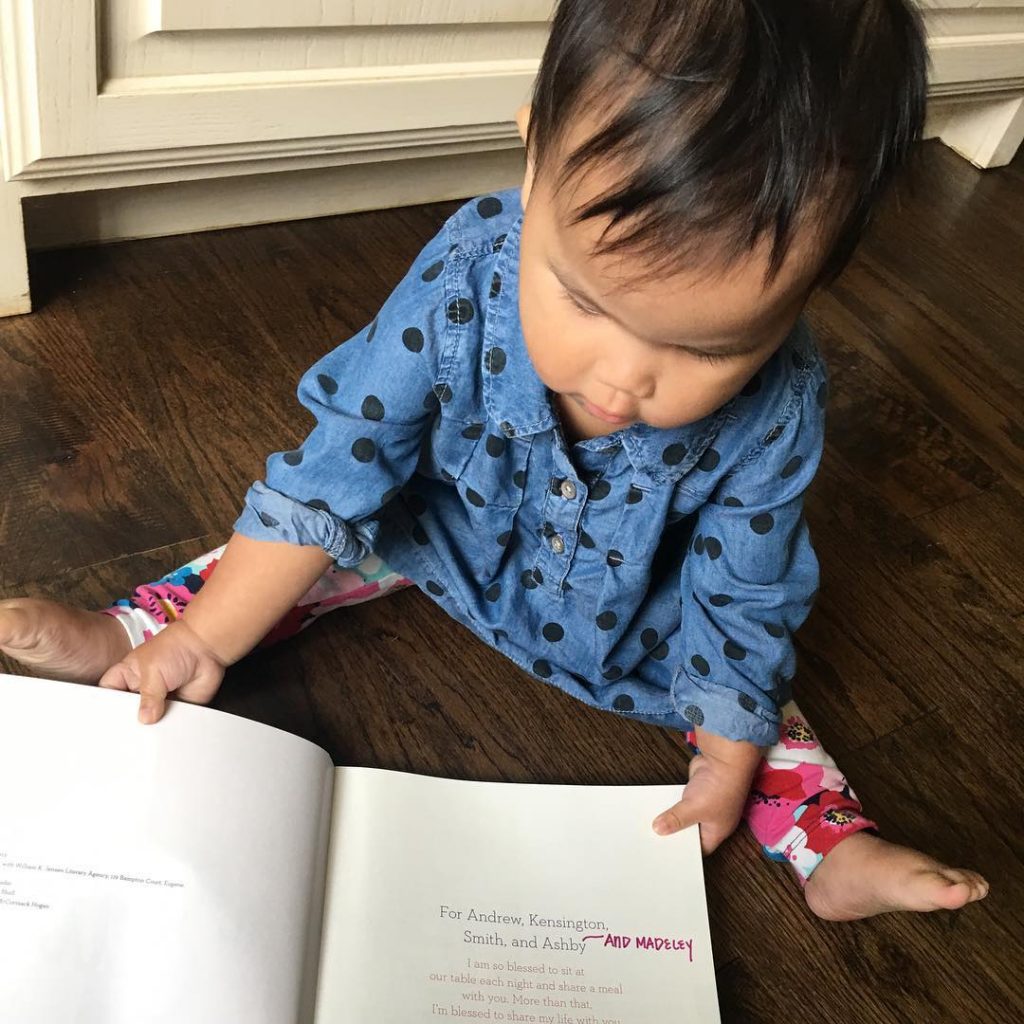 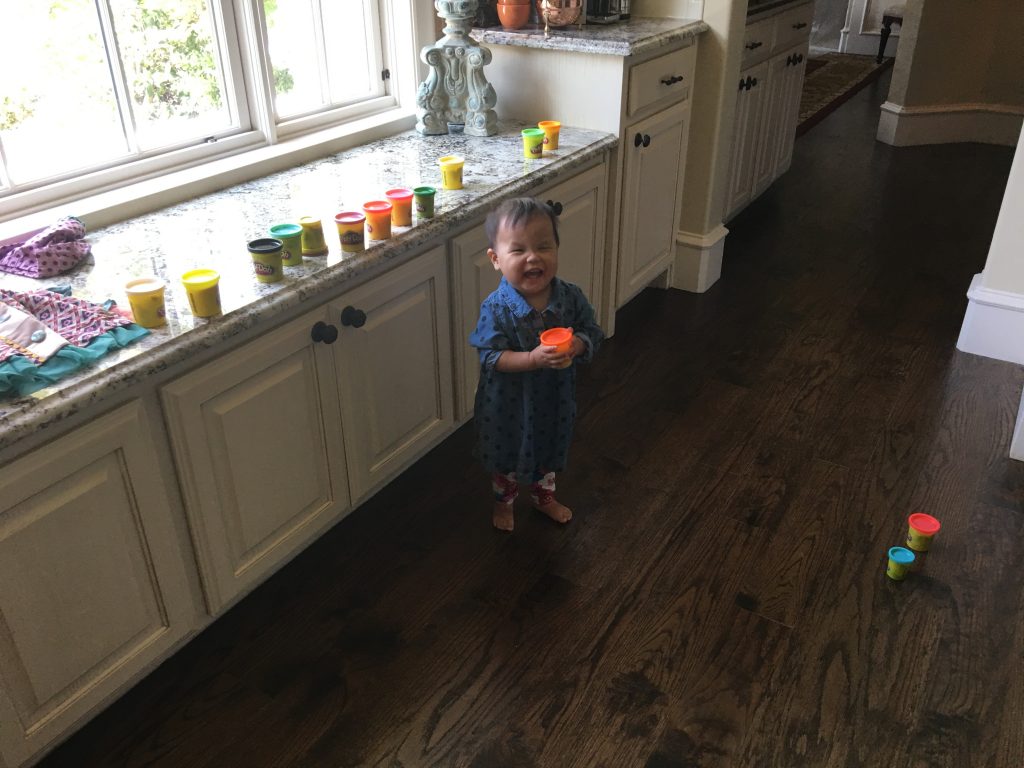 And her new favorite thing to do is to take all of the Play-Doh out of the cabinet and line it up.  She could play with the jars of Play-Doh ALL DAY LONG!  She stacks them, she makes them fall off, she thinks this is so much fun!