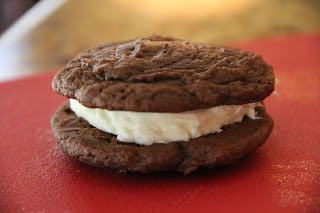 Ahhhh…the whoopie pie.  The first time I had a whoopie pie was when I visited my future husband’s parents’ house for the first time.  My future mother-in-law made them from scratch and they were oh so delish.  I mean…two chocolate cookies with cream in the middle…come on!
After we were married, I asked her to share the recipe with me.  I learned two important things 1. she must have really loved us because they were pretty complicated to make and 2. they contained Crisco…I don’t ever cook or bake with Crisco…I don’t even keep it in my house…so that explained why they were so good but that also meant I wouldn’t be able to make them.  Until now…
I give you the Mix and Match Mama version of the whoopie pie (the first of many, many versions).  You won’t miss the Crisco, you won’t miss the long ingredient list, and you won’t miss the flavor. 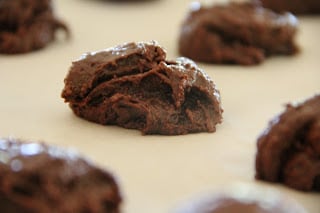 The cookies will be extra sticky when you put them on the baking sheet…don’t be alarmed, the minimal liquid makes for sticky batter but yummy cookies. 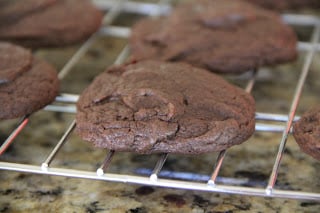 After they bake, cool the cookies on a wire rack before frosting. 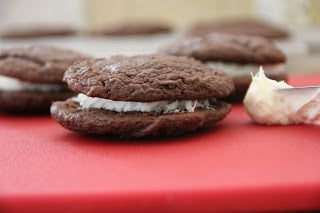 Shopping List
1 box chocolate cake mix
1/2 cup veggie oil
2 eggs
1/4 cup water
store bought vanilla frosting
Preheat oven to 350 degrees
Combine cake mix, oil, eggs, and water in bowl.
Drop by 2 tablespoons onto lined cookie sheet (leave about an inch between each cookie)
Bake 8-9 minutes
Cool on pan 5 minutes, move to wire rack and cool 15 more minutes
Take one cookie and place a tablespoon or so of store bought vanilla icing in the center.  Press another cookie on top (this will spread the icing out to the edge).
That’s it!  You’ve made a whoopie pie!
This recipe makes about a dozen finished whoopie pies…I suggest doubling the recipe 🙂