Hello from Guangzhou, China!!
We are doing so well here on our third (and final) leg of this adventure.  Yesterday, we waited around the hotel for Ashby’s Chinese passport to be issued, we picked it up and headed to the airport for a flight to Guangzhou.  We didn’t arrive at our hotel here until 11:30 last night and we were all beat.  That being said, I love, love, love, love Guangzhou!  I feel like it’s a cross between…wait for it…Honolulu and Barcelona (random, right?).  The weather is gorgeous (60s and 70s) compared to where we’ve been the last two week (20s!) and the hotel and city are just beautiful.  I am so happy we’re spending our last week here!
Here you go…a smattering of pics from the last two days… 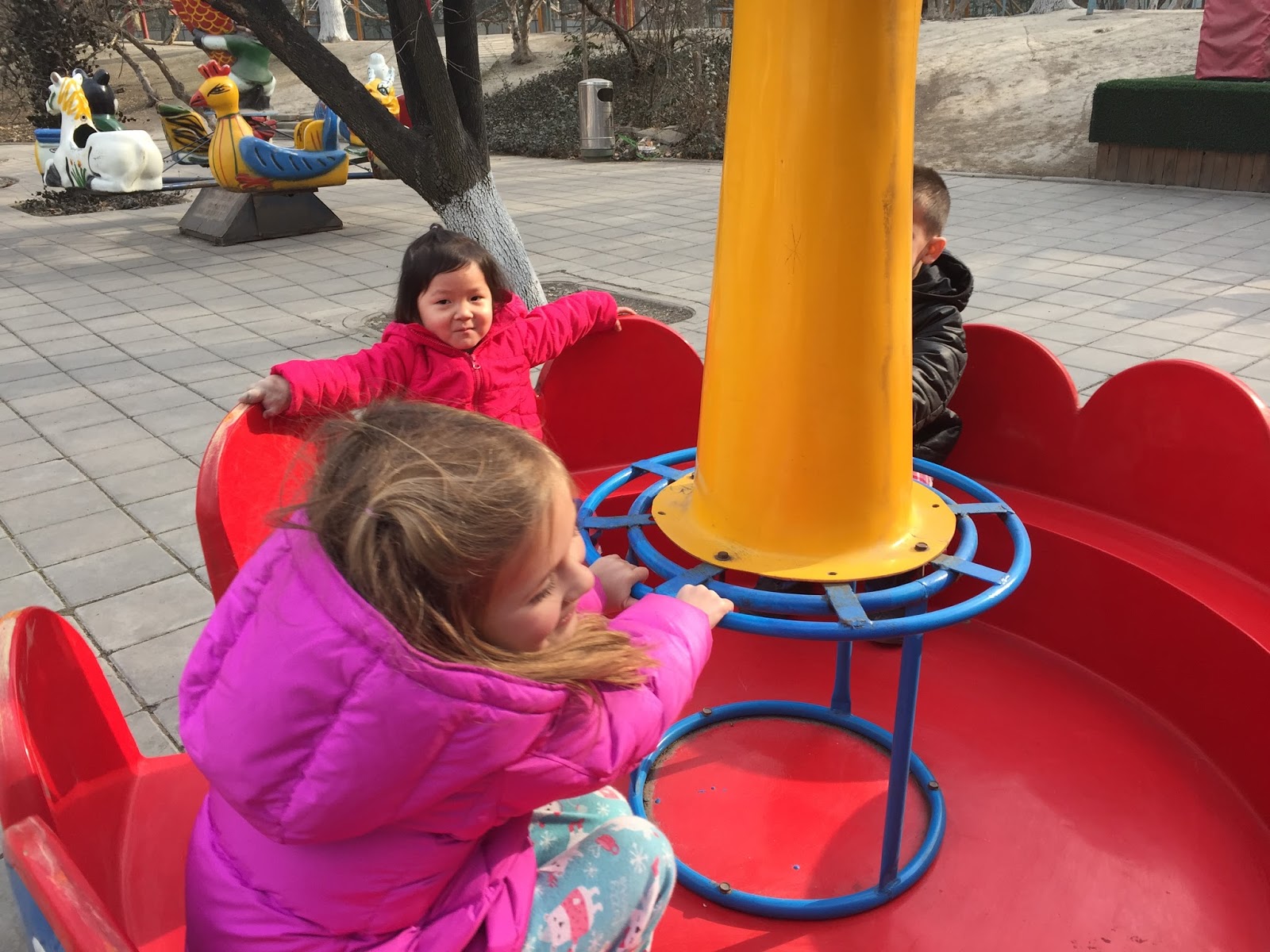 We knew we had all morning before leaving to get Ashby’s passport and to head to the airport, so we walked about 20 minutes to a really pretty park and let the kids play in their pajamas (this way, we could clean them up really well before the flight and they wouldn’t have to take a bath once we arrived at the new hotel since it would be so late).  Just a bunch of Americans playing in a Chinese park in their pajamas :). 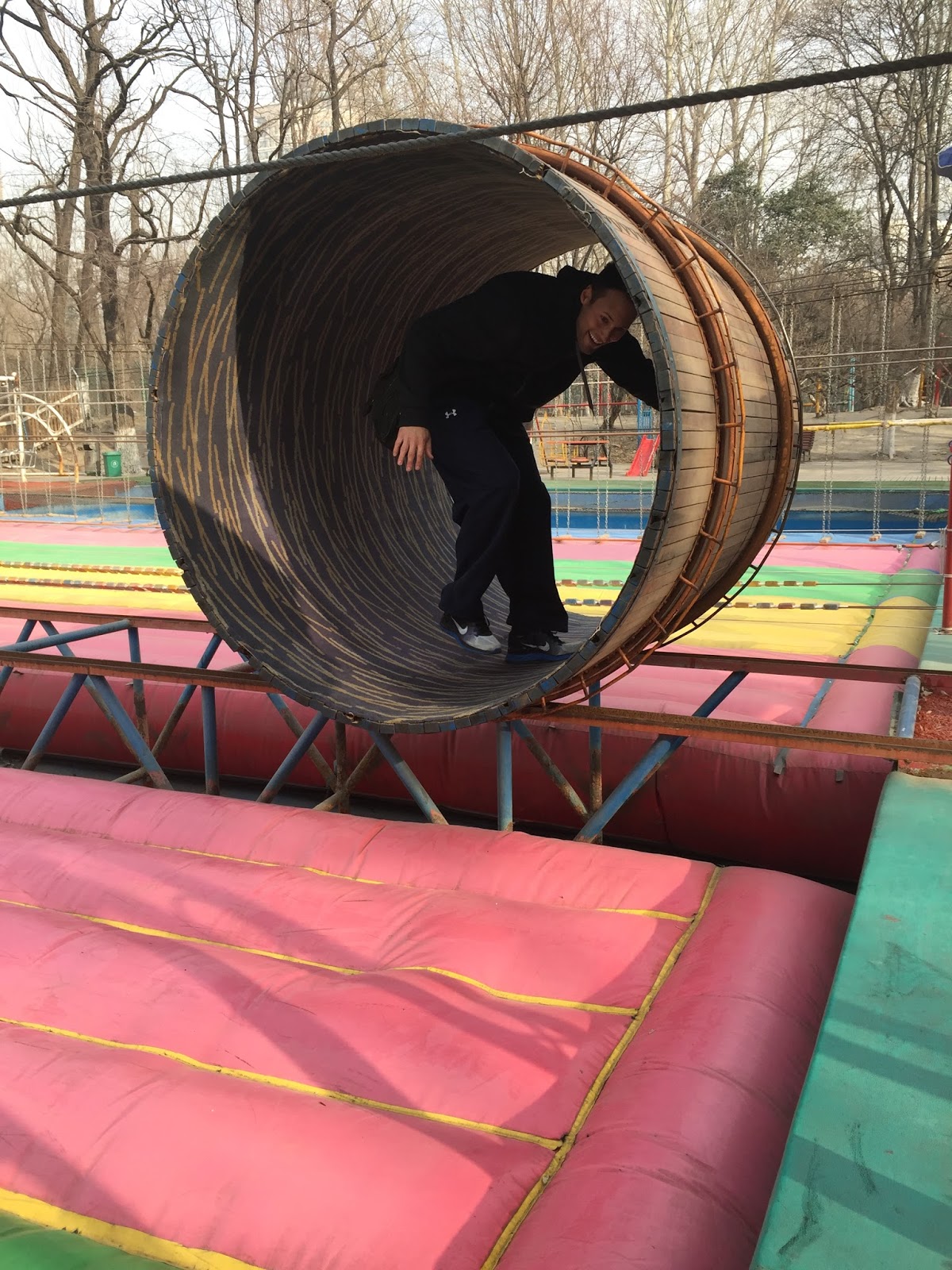 Because when there’s a barrel that rolls across an open pit, your 6’5″ husband should totally get in! 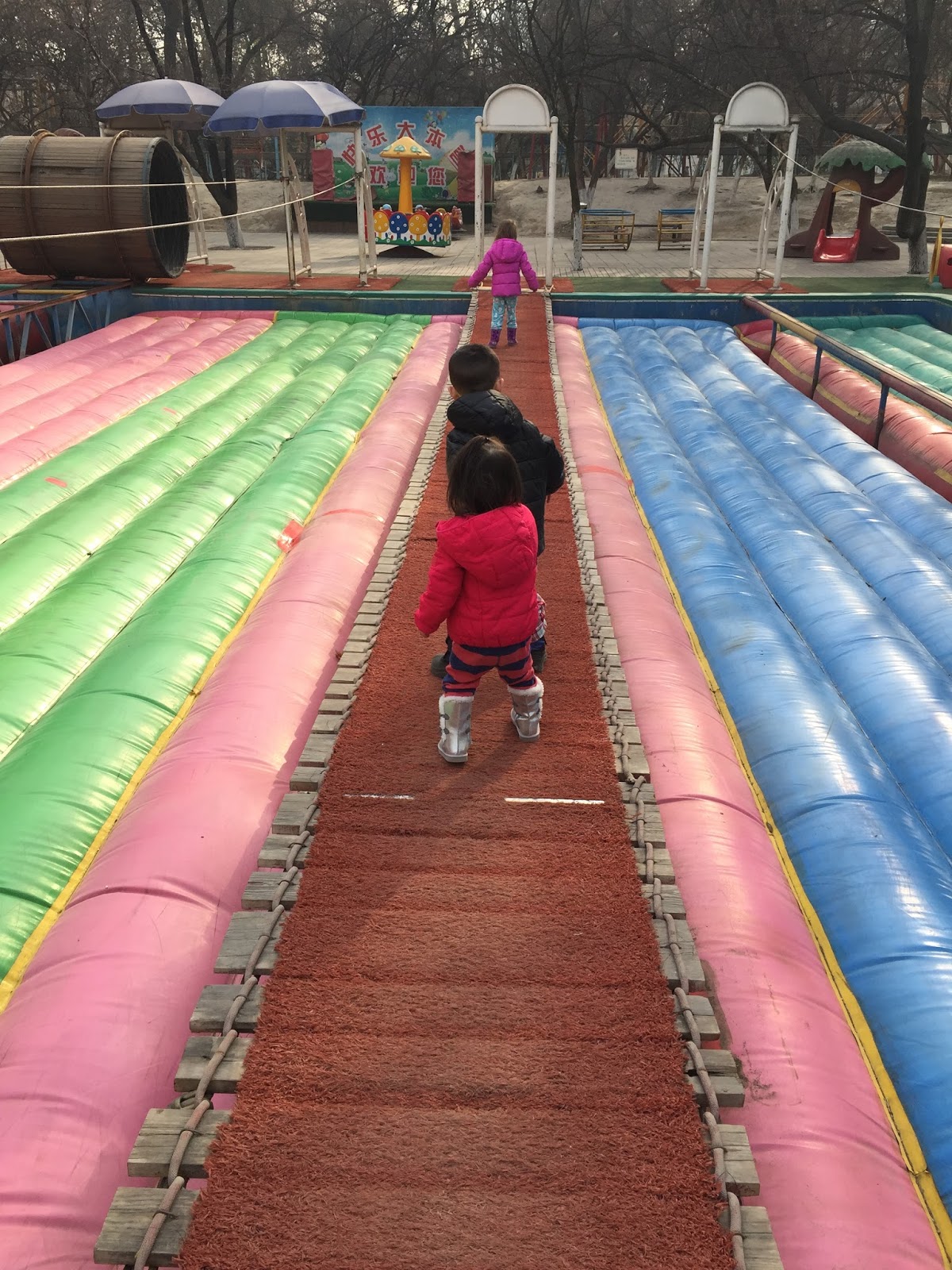 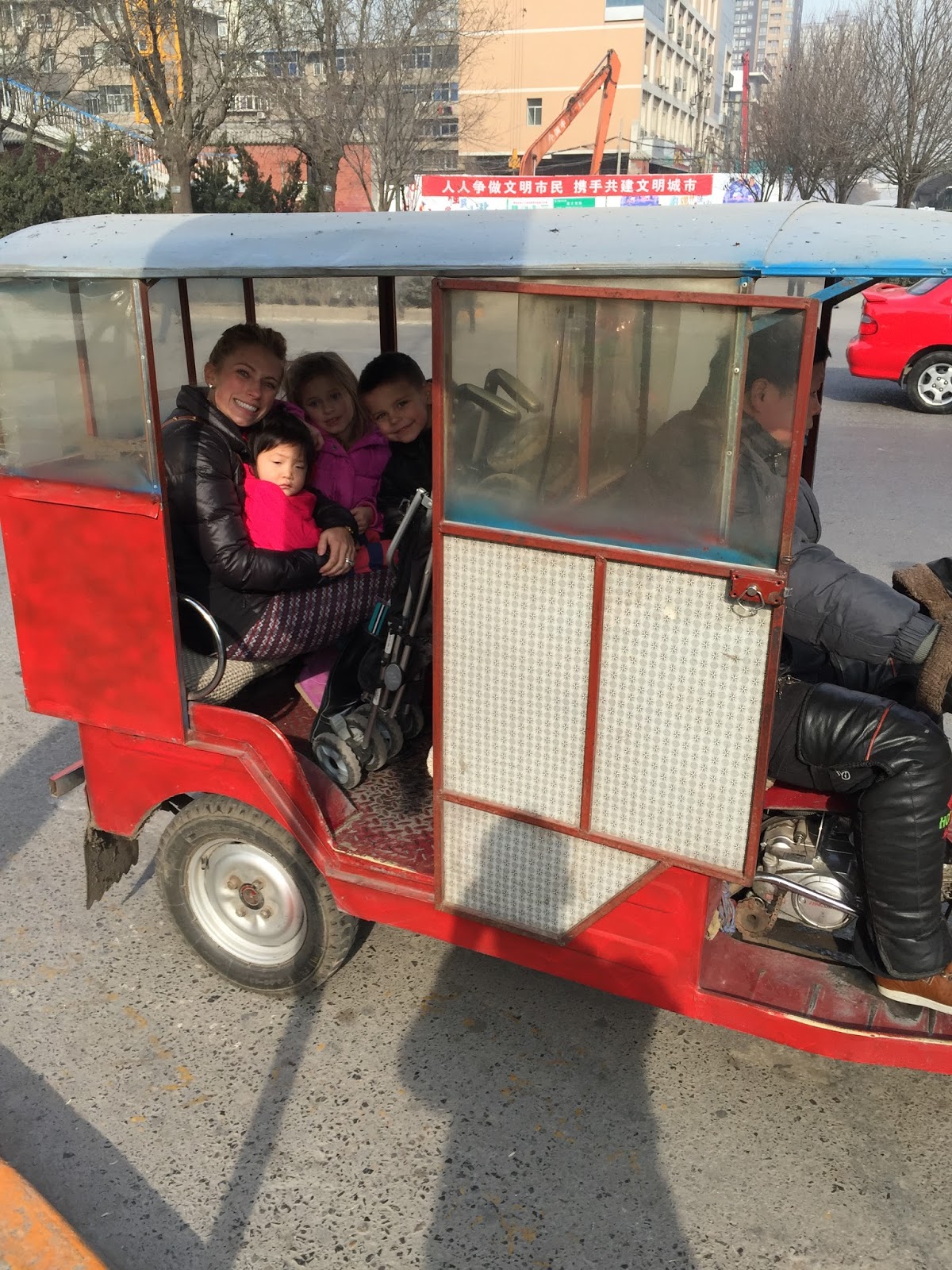 Instead of walking back after the park, we all climbed in this thing (along with our stroller).  The kids had a blast on our little ride! 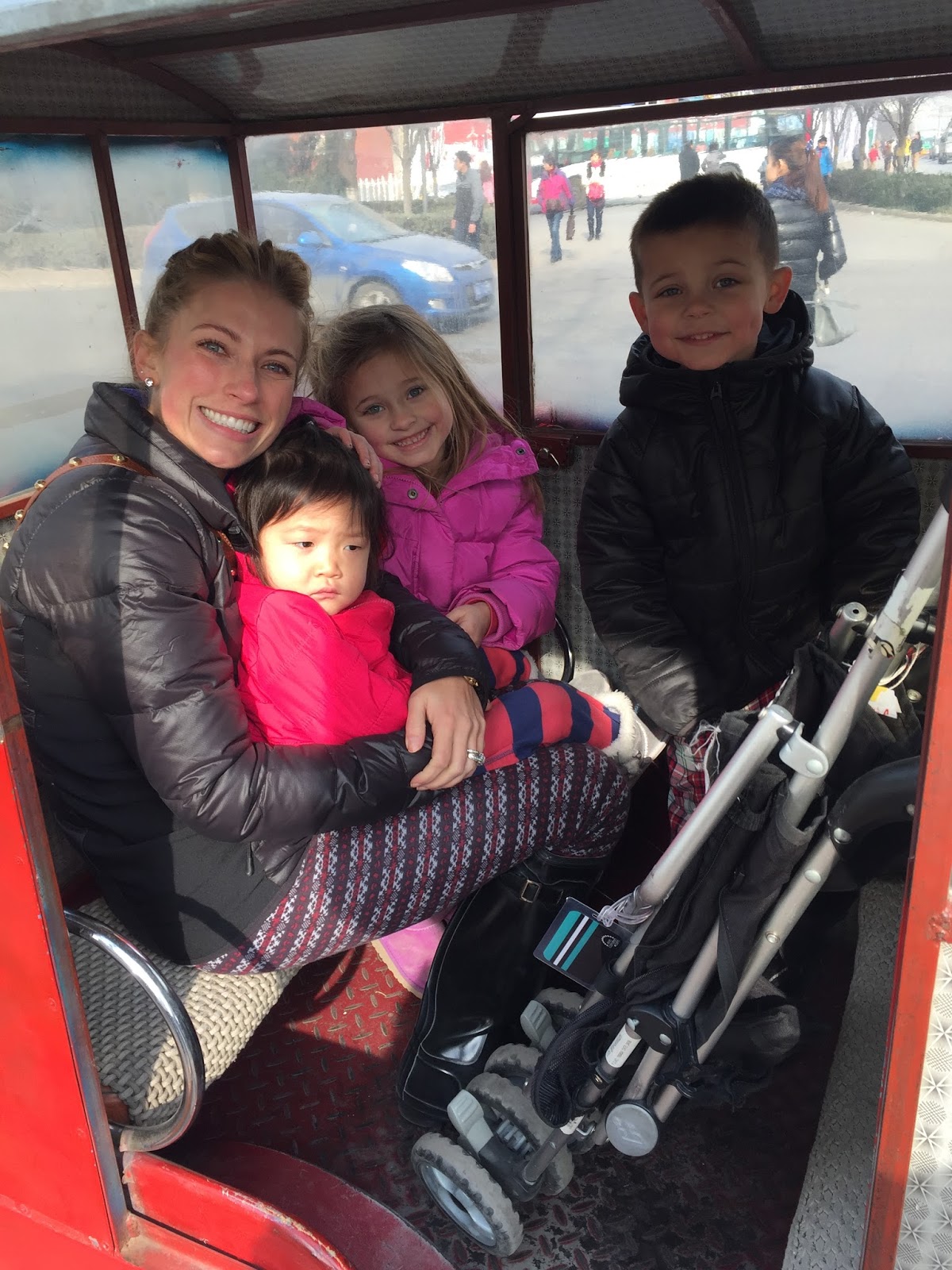 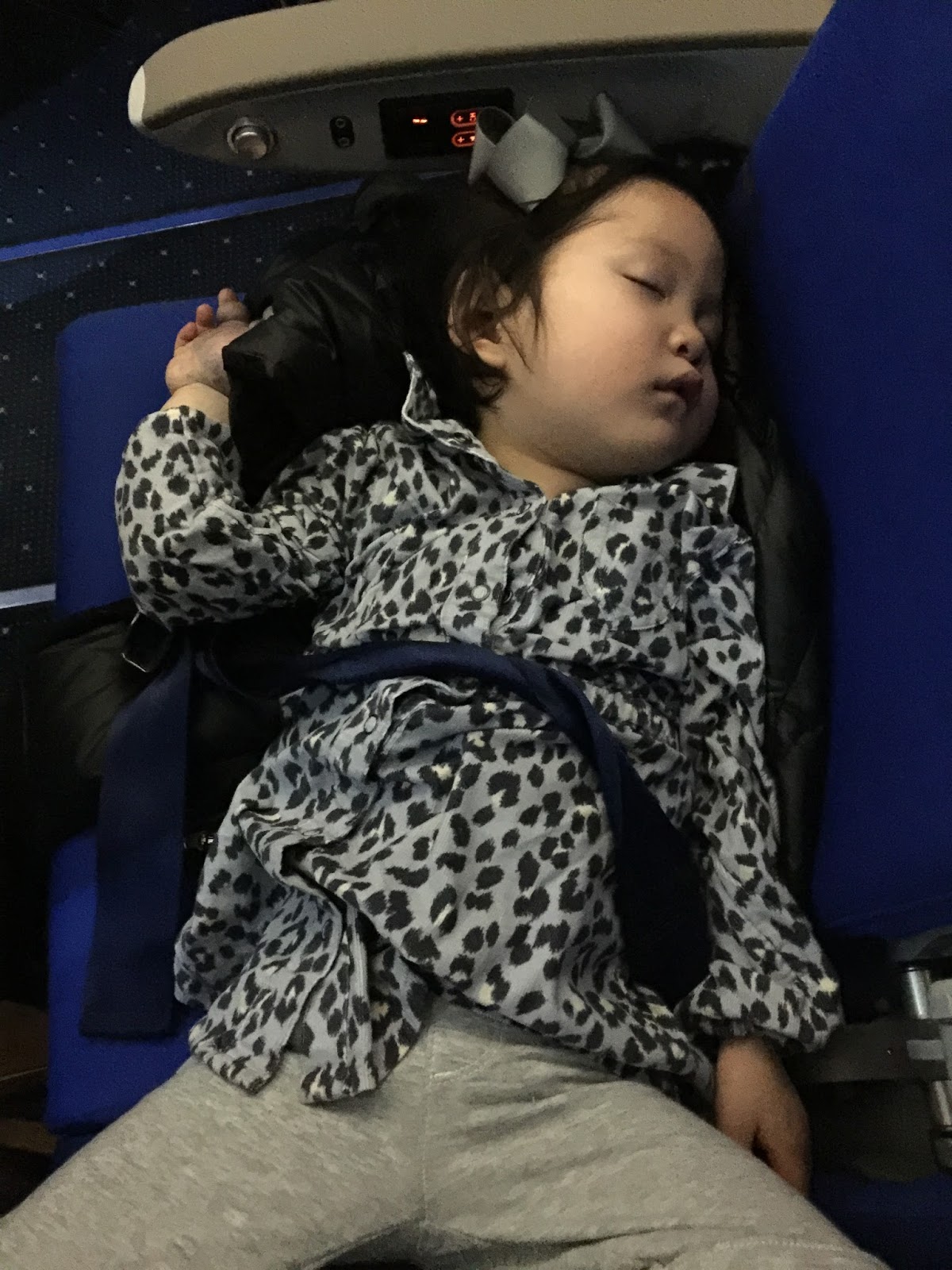 And then sweet pea had her very first flight.  We left at 6:30 for our 2.5 hour flight but we were in a holding pattern at the end waiting to land, so we were actually in the air 3 hours.  She slept like this the entire time while Smith and I watched Iron Man. 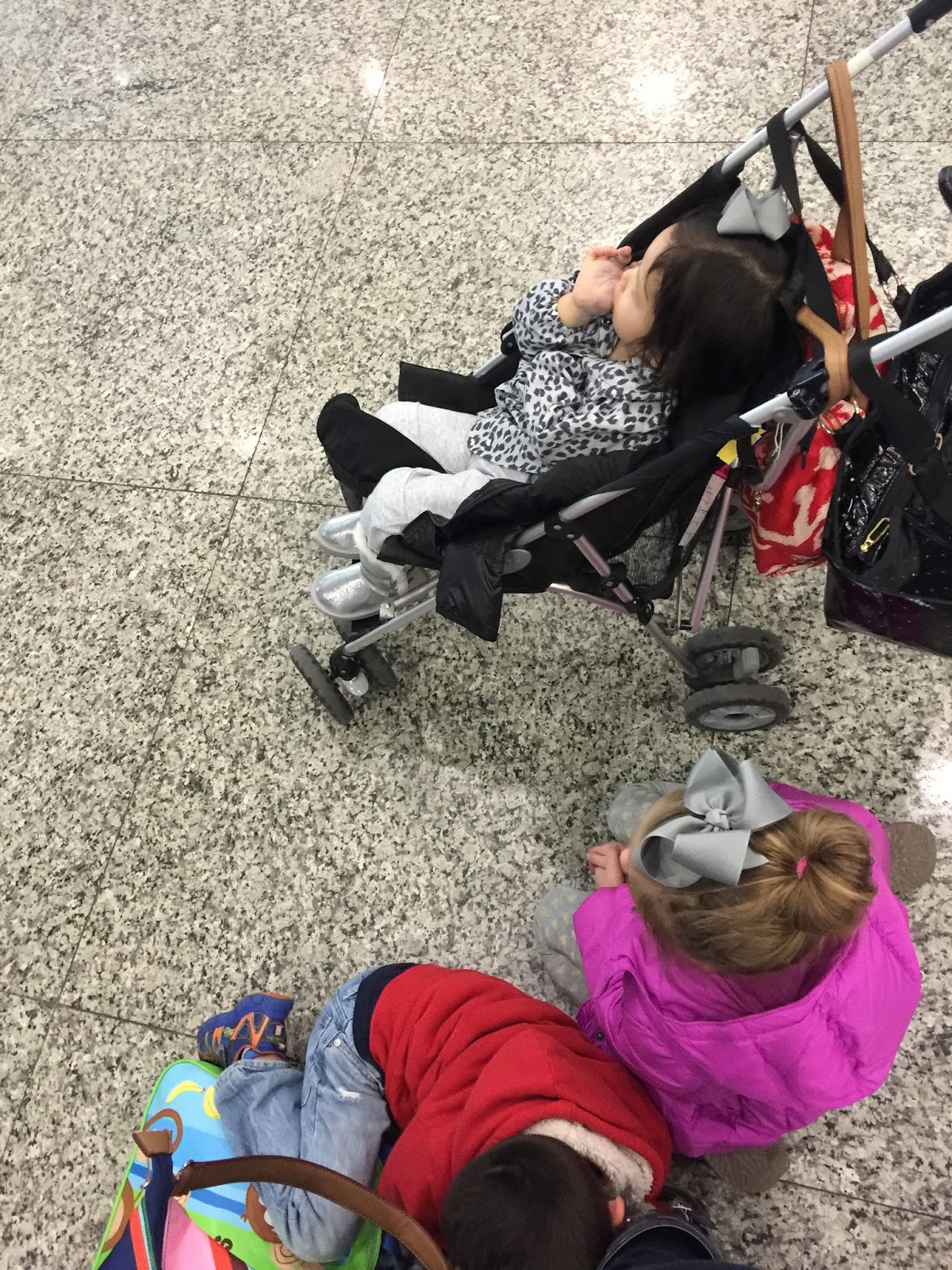 9:30 at night and just hanging out at baggage claim.  Three tired kiddos. 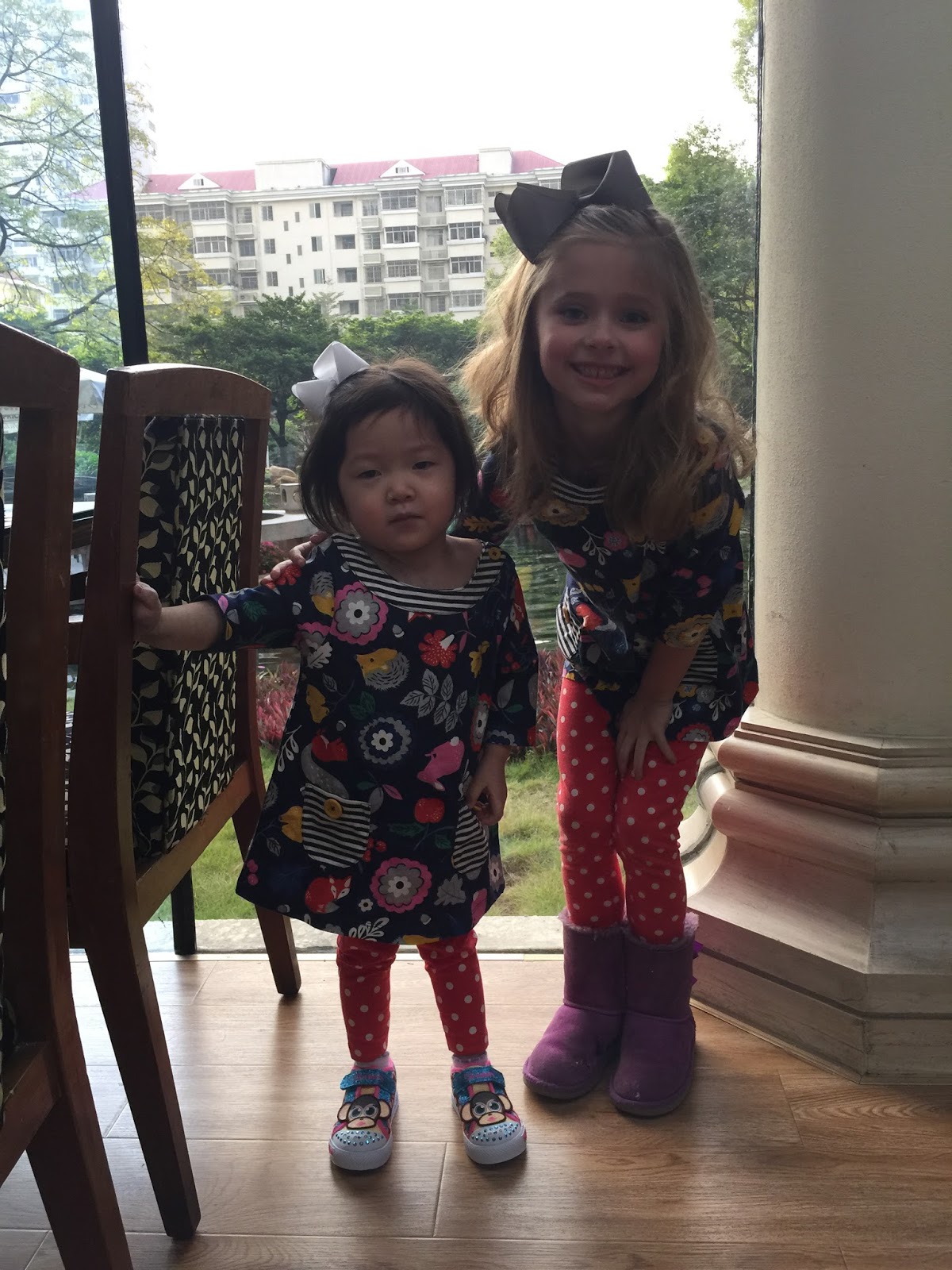 This morning, we woke up to eat breakfast before Ashby’s medical exam (every kid needs a medical exam before they can get their US Visa).  The girls were twinsies today! 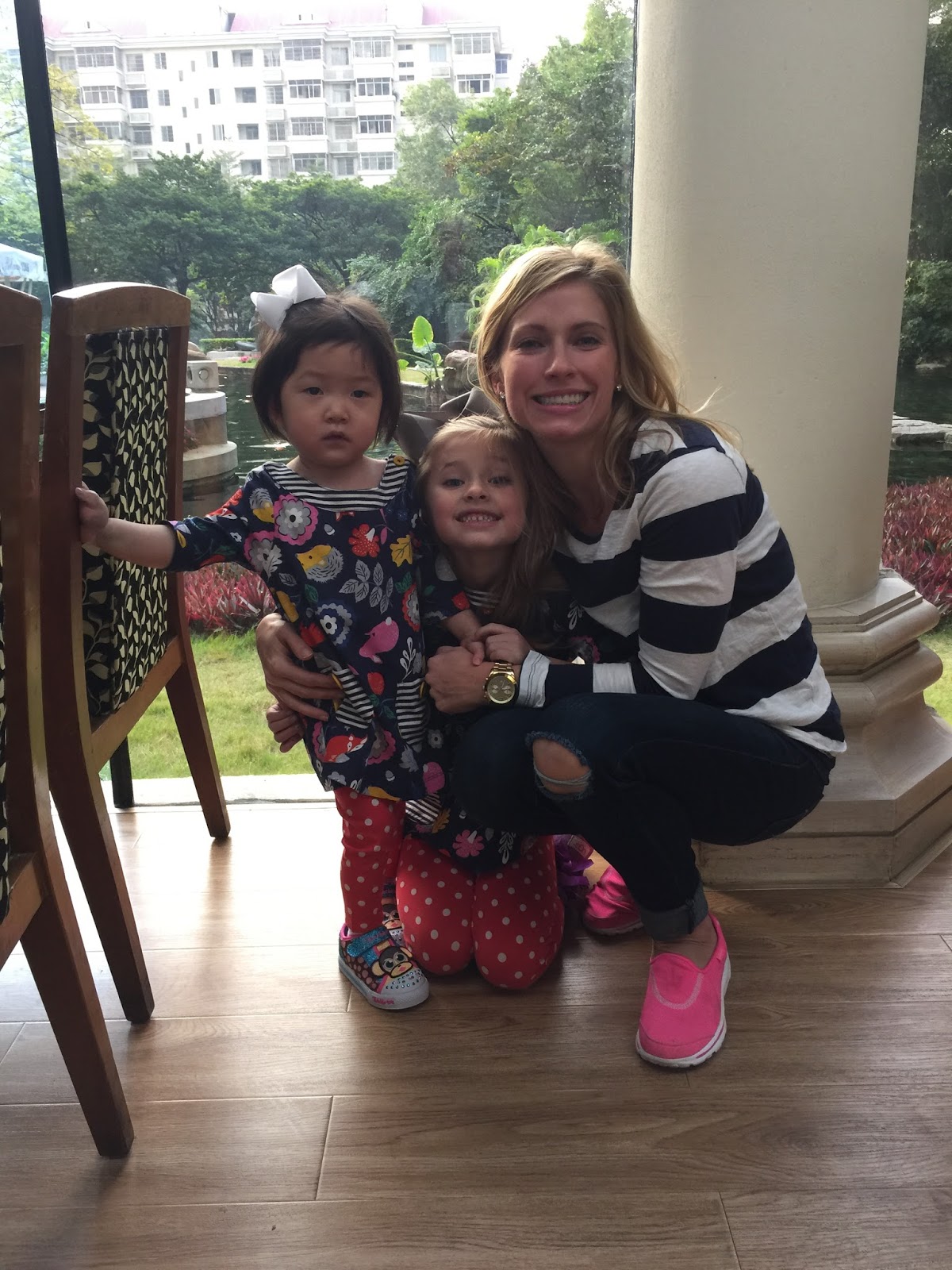 My girls and me 🙂 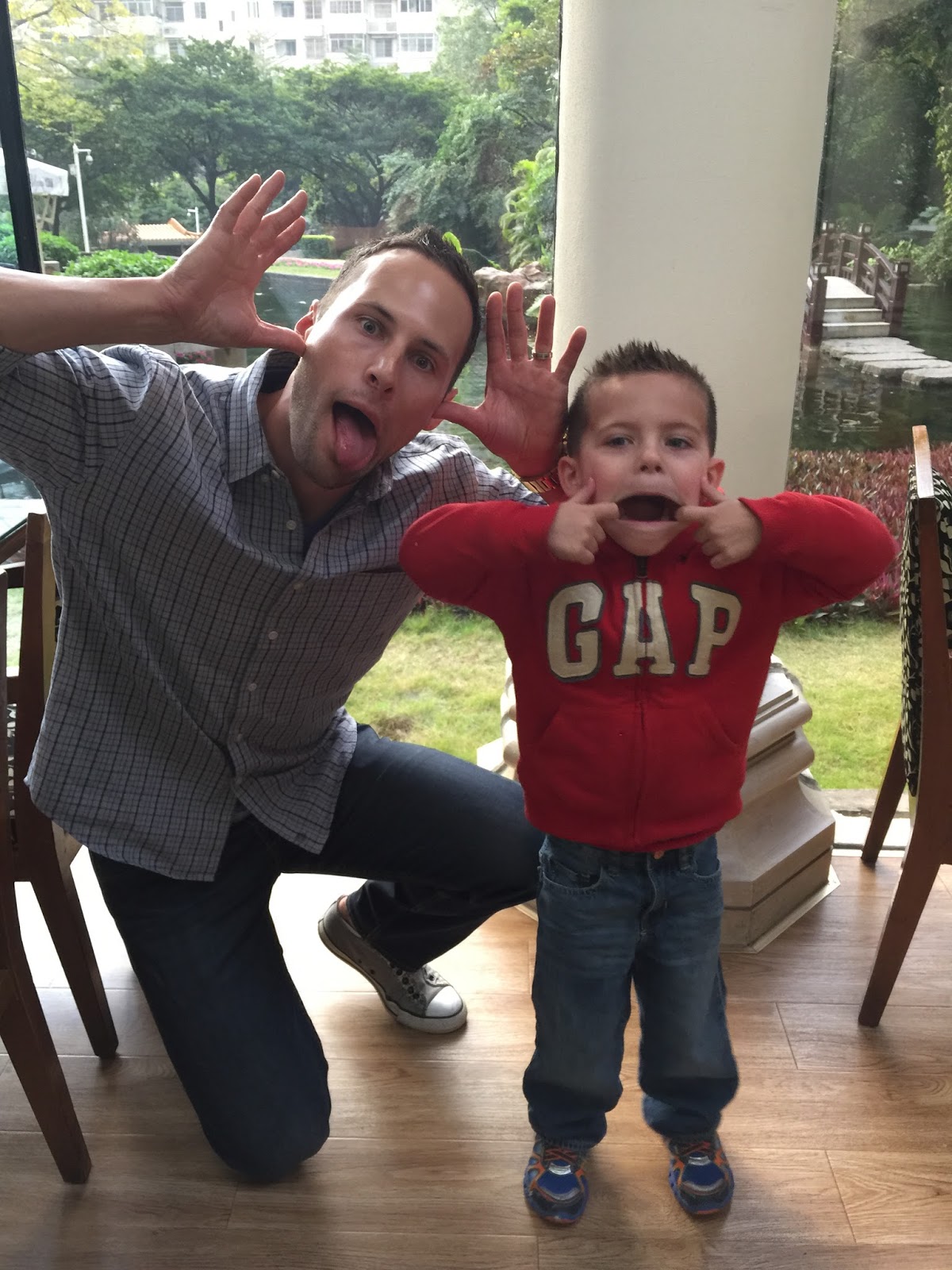 My boys 🙂
We went to the clinic area and waited for the examination to be competed (there were three steps).  Sitting there with dozens of other American families and their adopted kids made my heart just burst.  I think our visit to the medical clinic this morning was just as meaningful to my kids as the orphanage trip.  There are so many wonderful people who adopt kids with such severe special needs.  I know that my kid technically has a “special need” but seeing several amazing moms and dads with kids who have really serious special needs just broke my heart and made me feel happy all at once.  I felt like I was sitting in a waiting room full of angels.  God bless these sweet parents who take on so much from the get go. 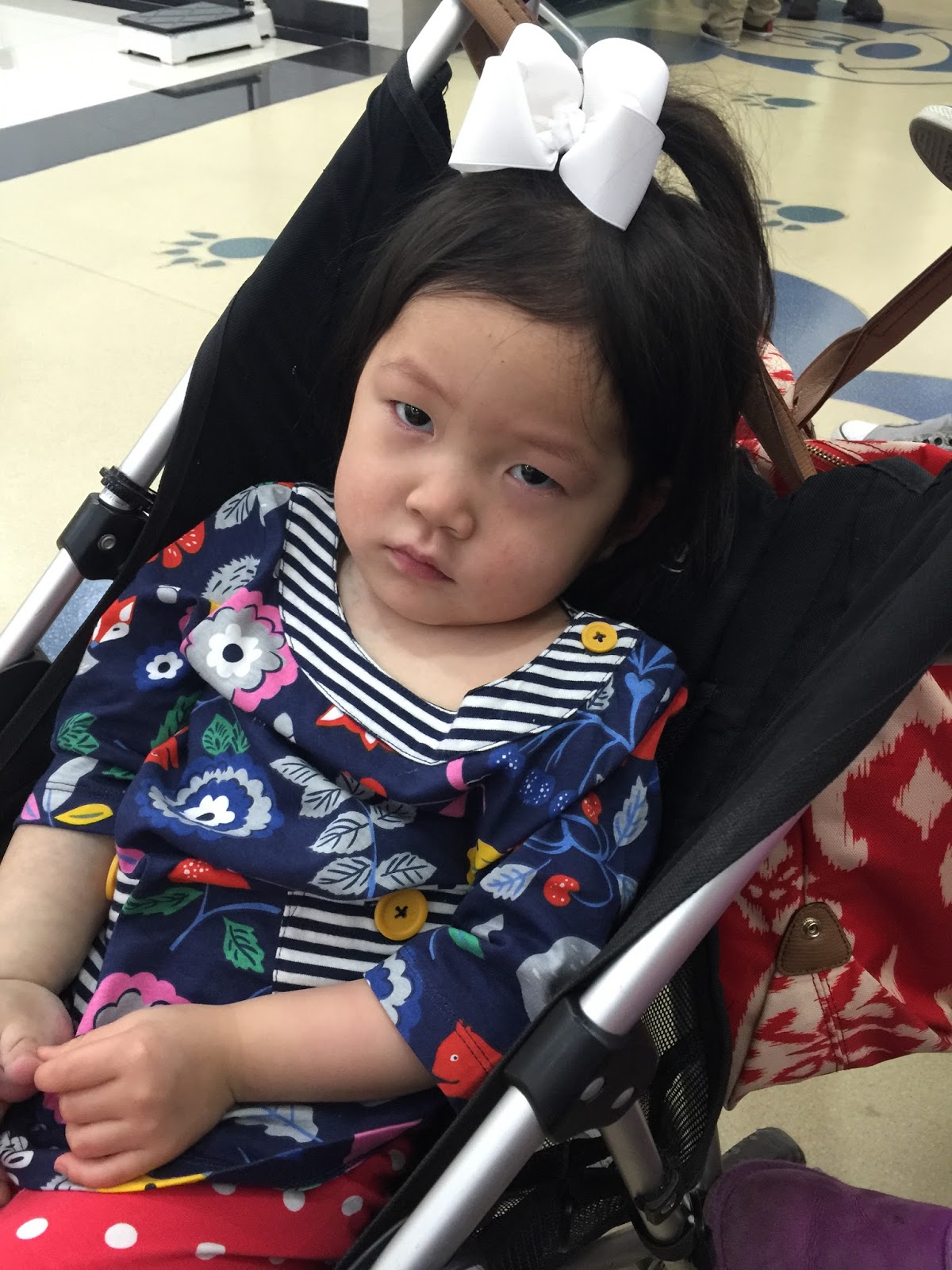 We’re going to call this Ashby’s “I hate this place, get me out of here” face.
She did great with her medical exam, she was tested for tuberculosis and they drew blood…never fun. 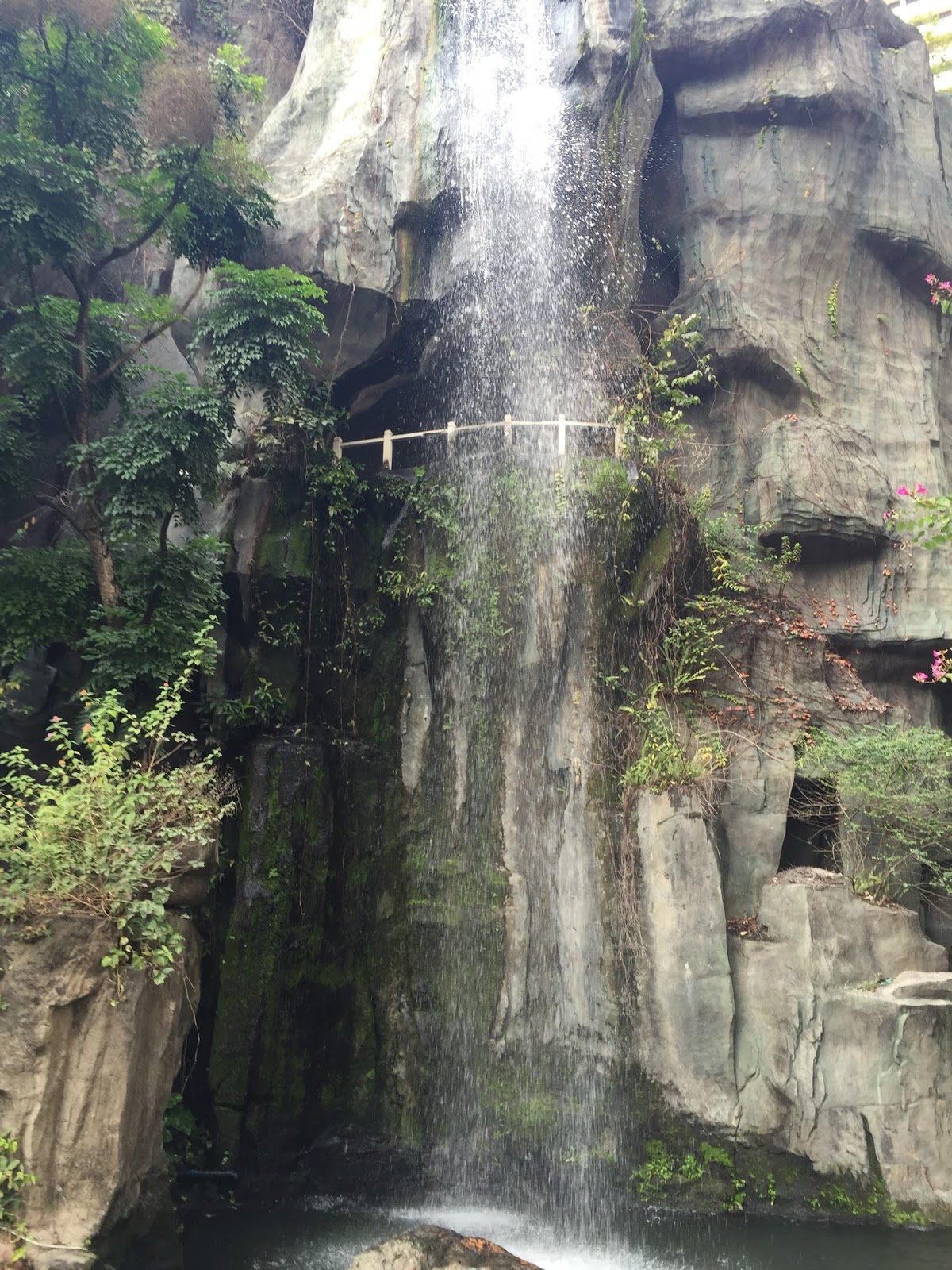 After our morning at the clinic, we went back to the hotel for lunch and to play by the waterfall inside our hotel property.  The breakfast and lunch restaurant looks out on it, so we went out and let the kiddos play before we ate.  They had a blast! 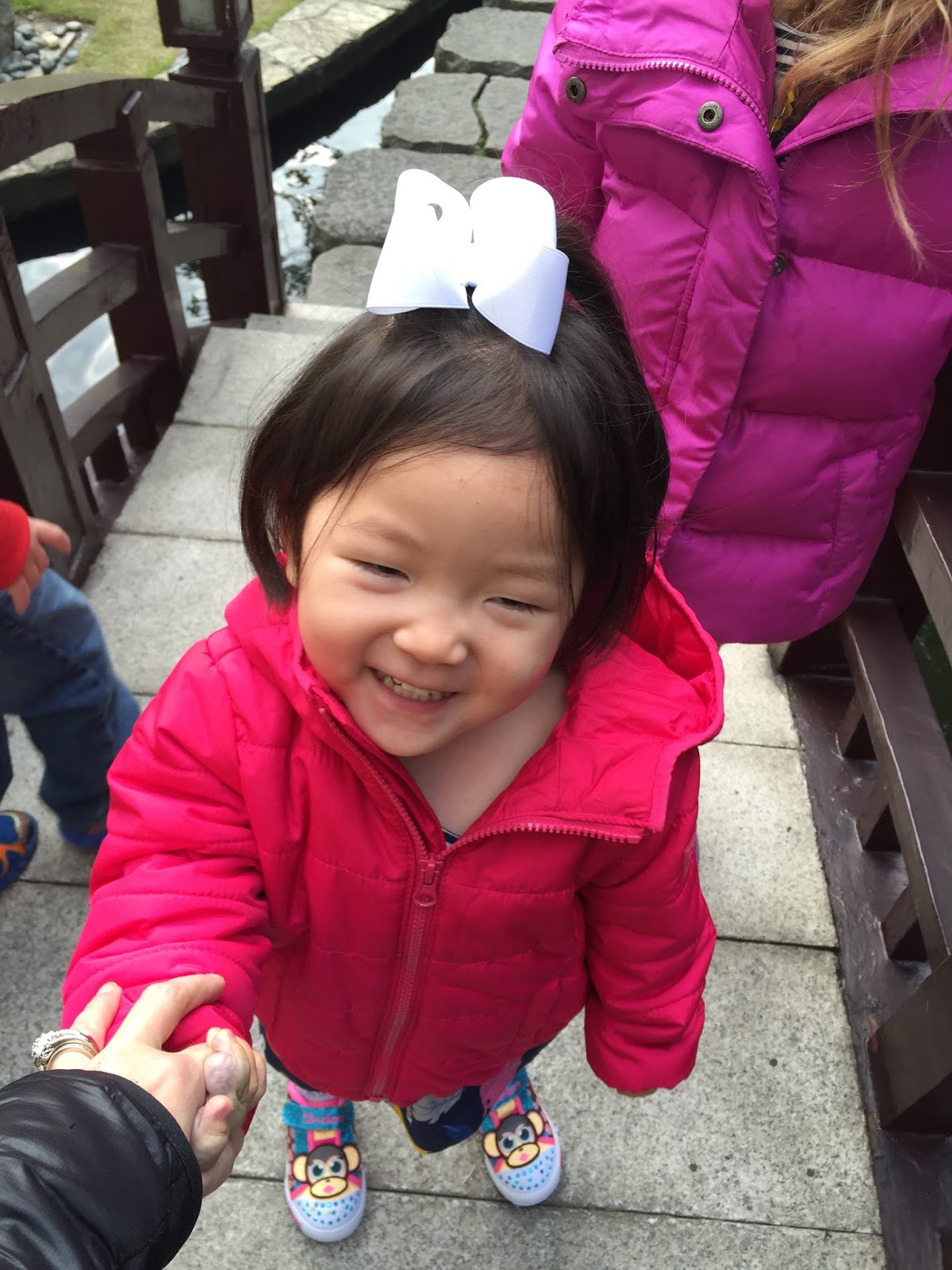 Going over the bridge with her brother and sister. 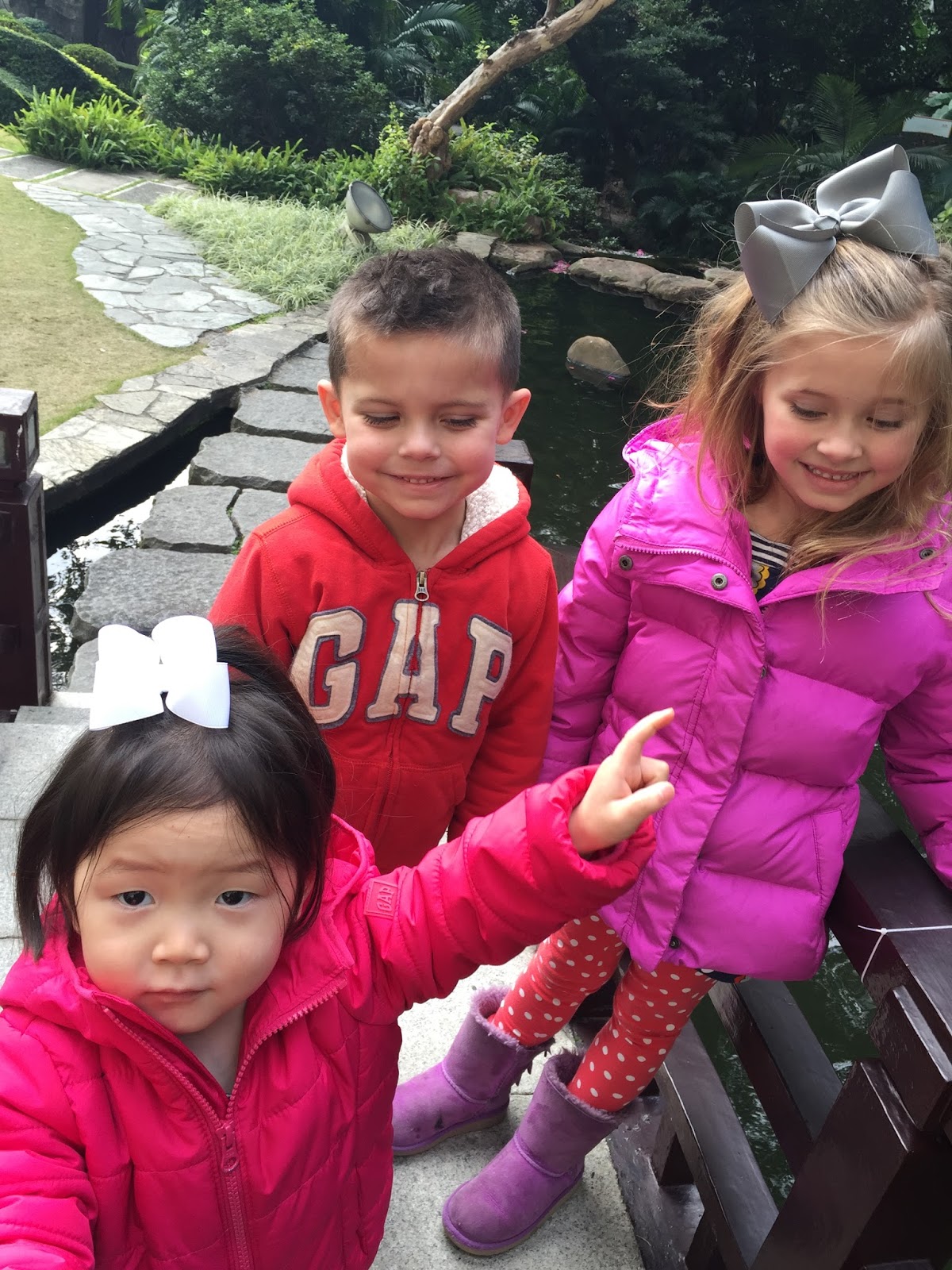 This is her “look at the waterfall, mom” face. 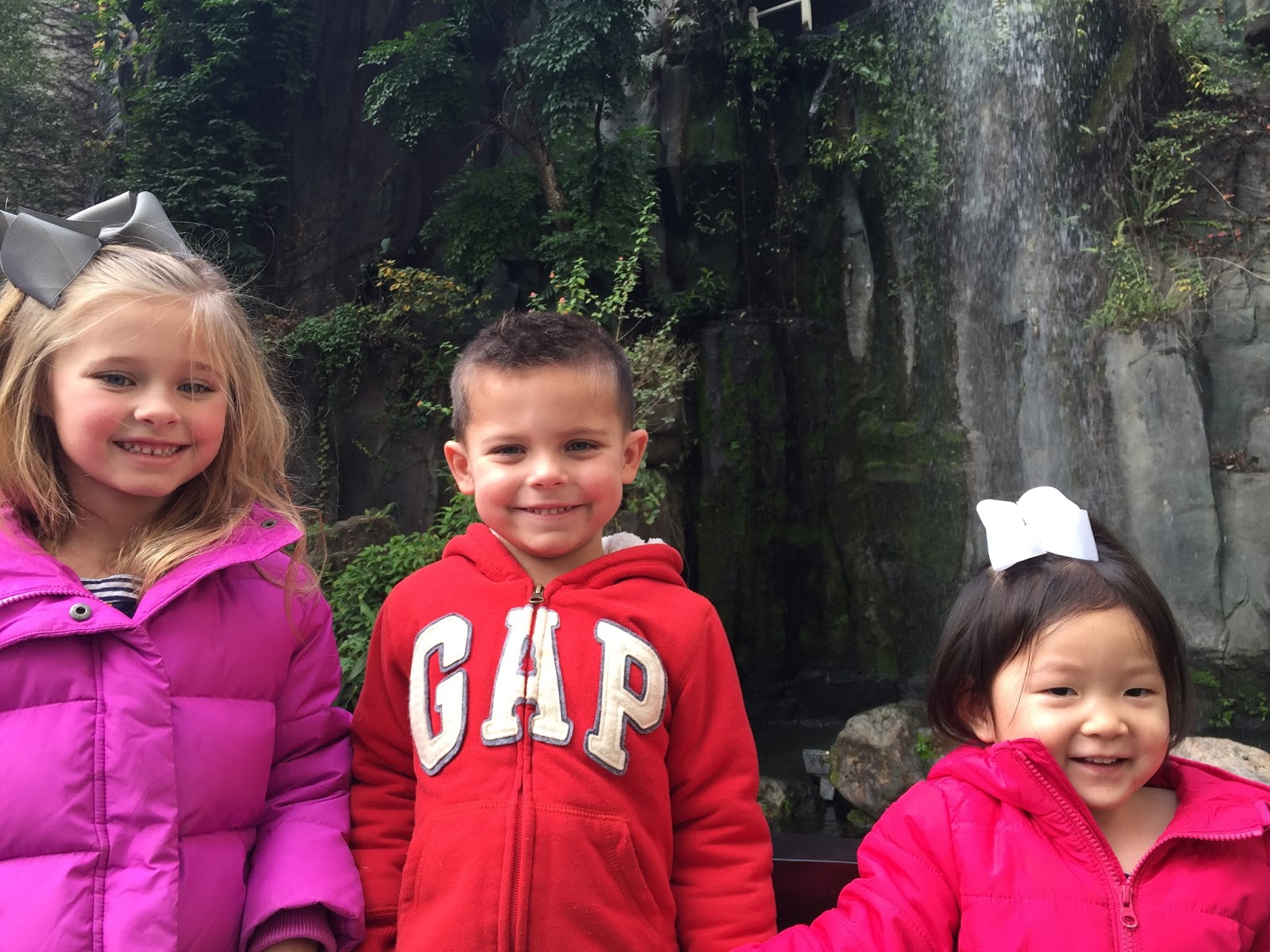 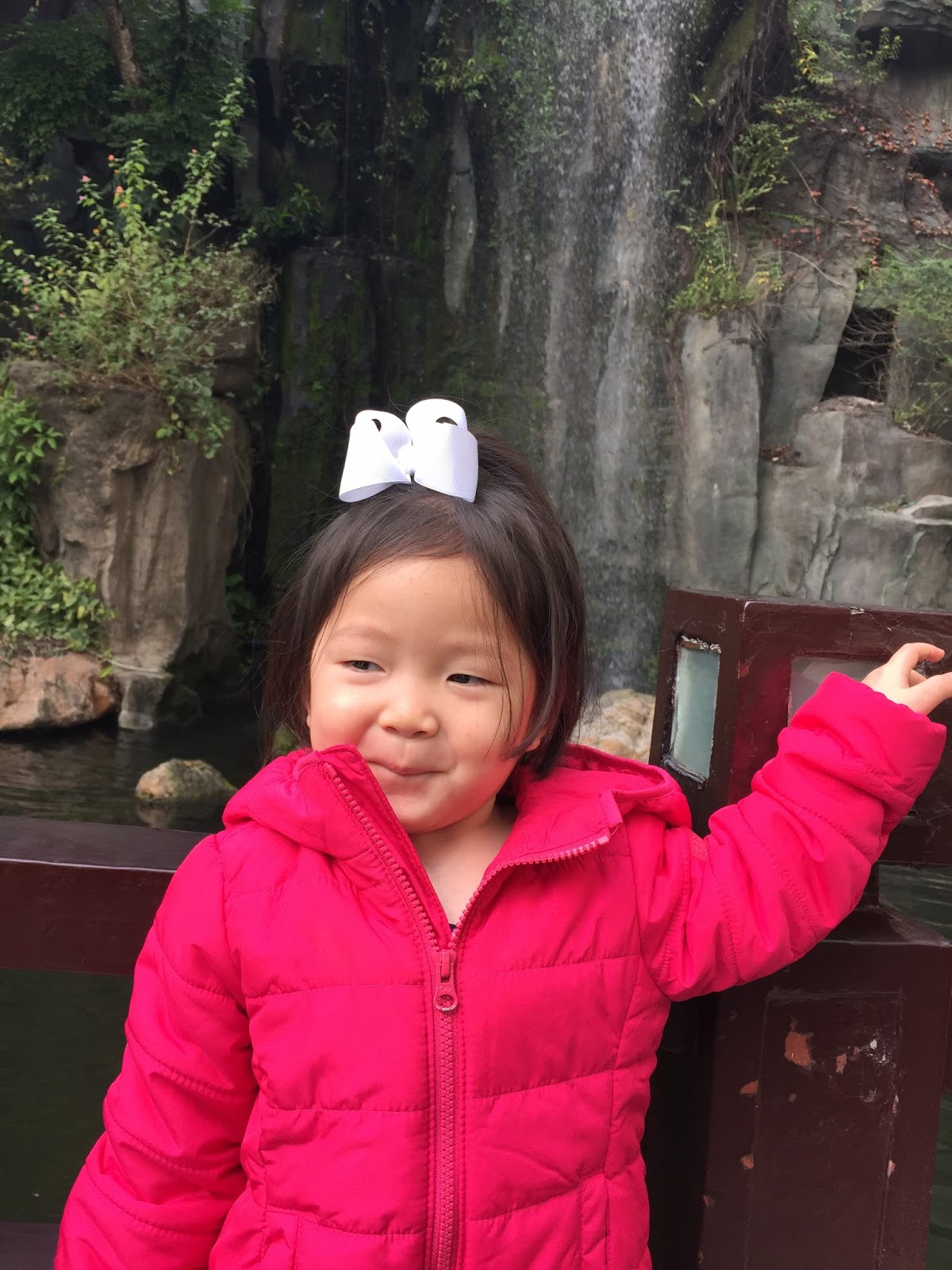 Trying so hard not to smile… 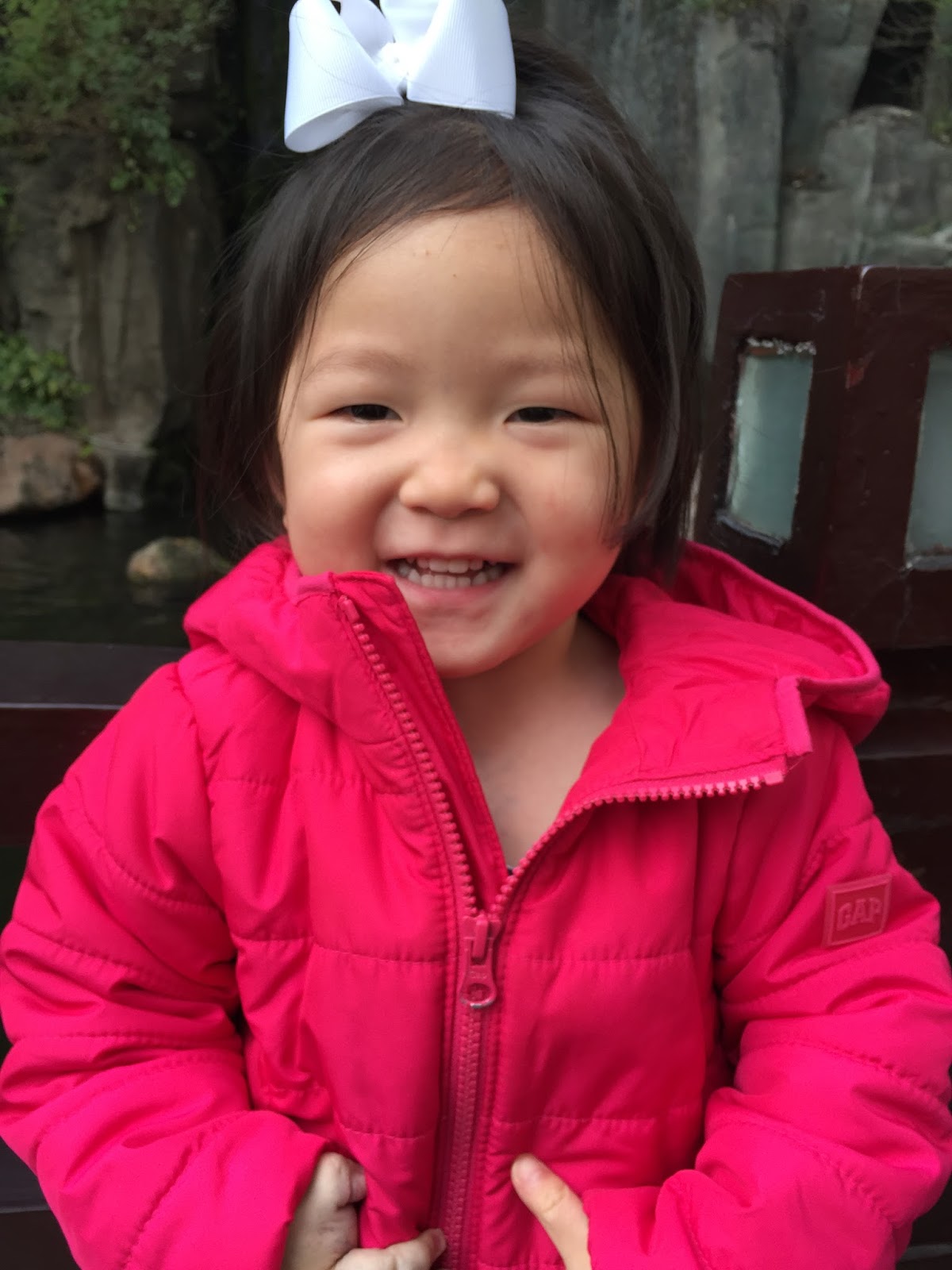 …but she can’t help it!  Ashby is all smiles! 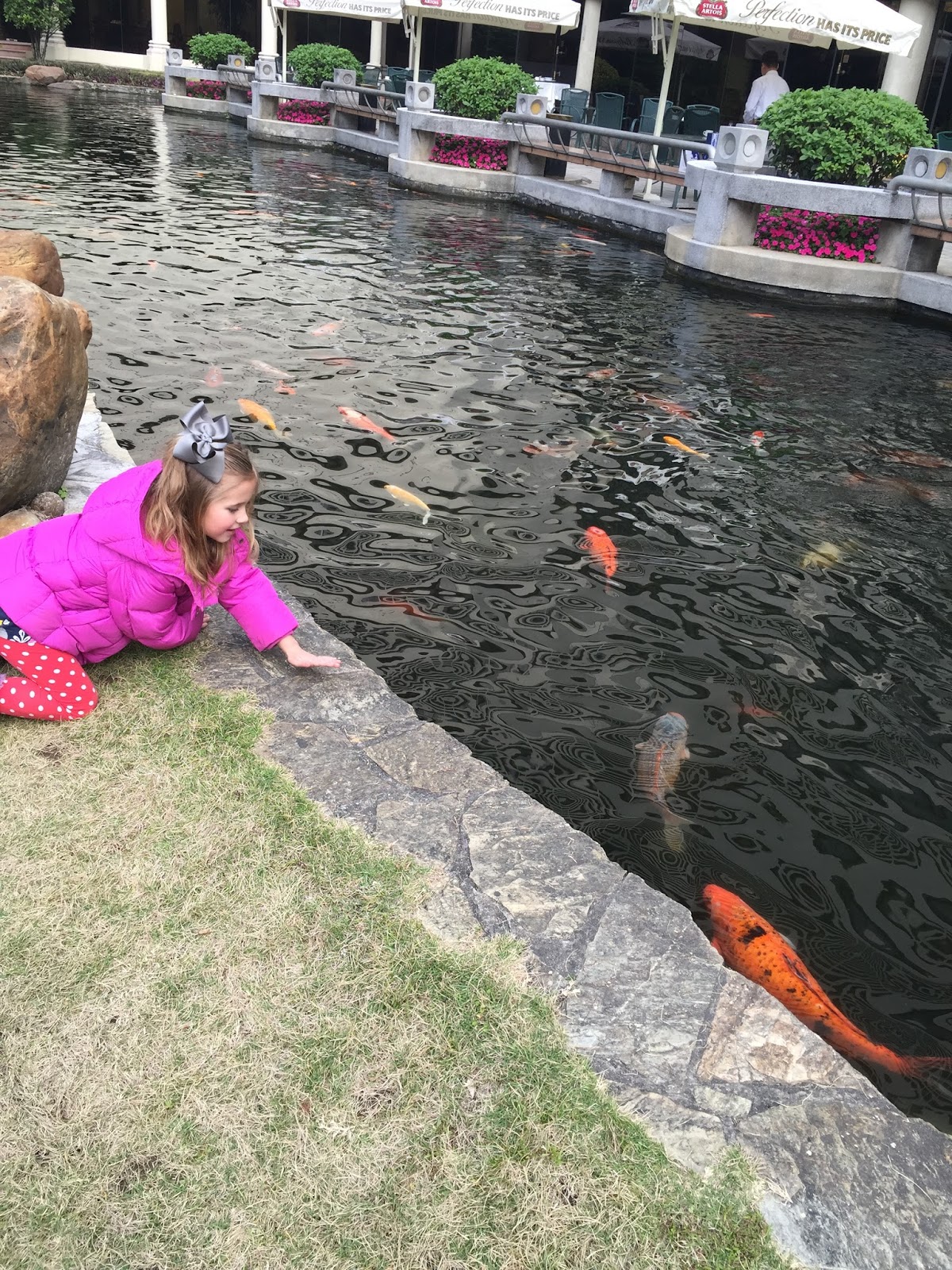 Kensington got up close and personal with the fish. 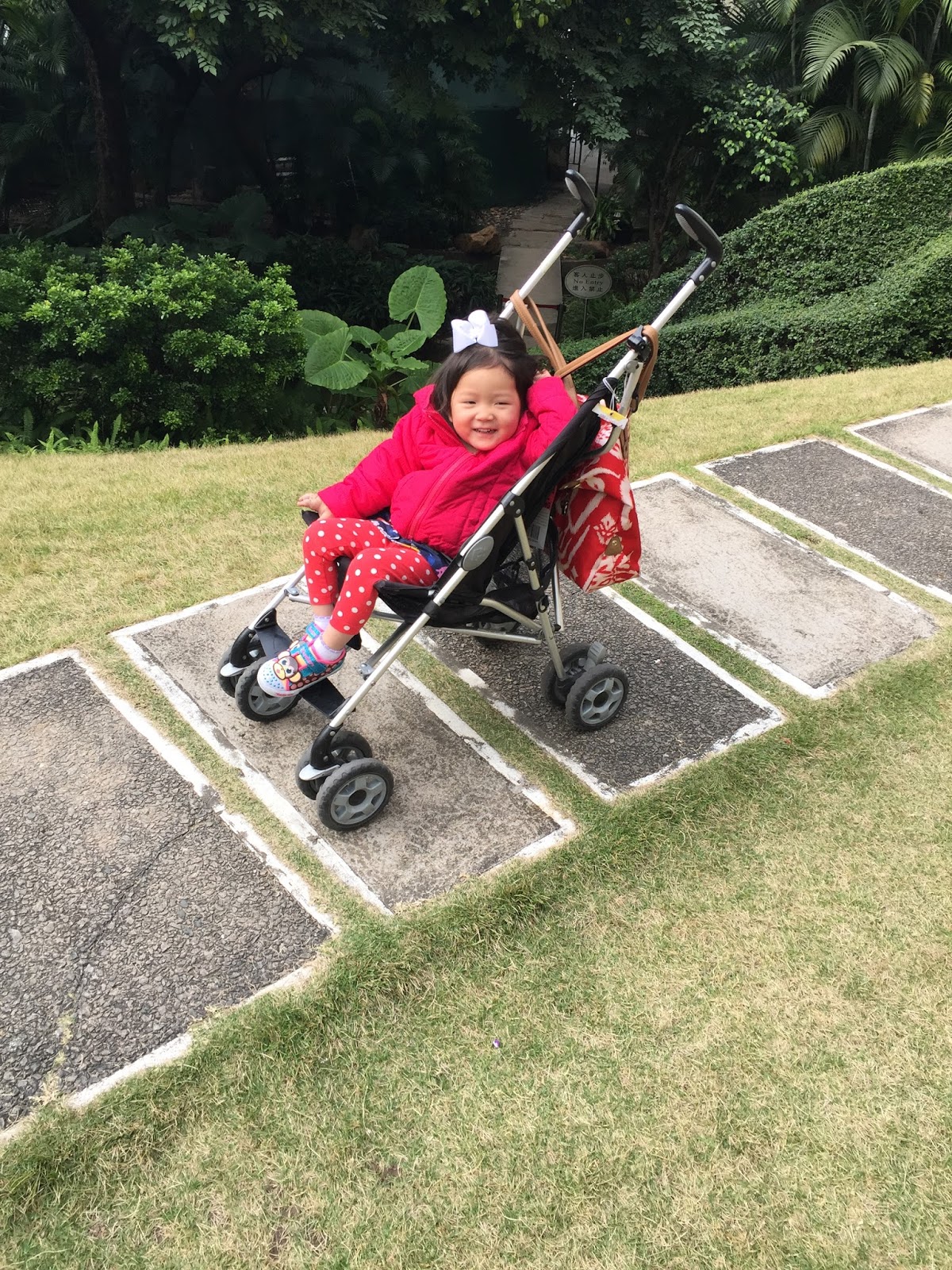 Ashby watched her sister by the fish 🙂 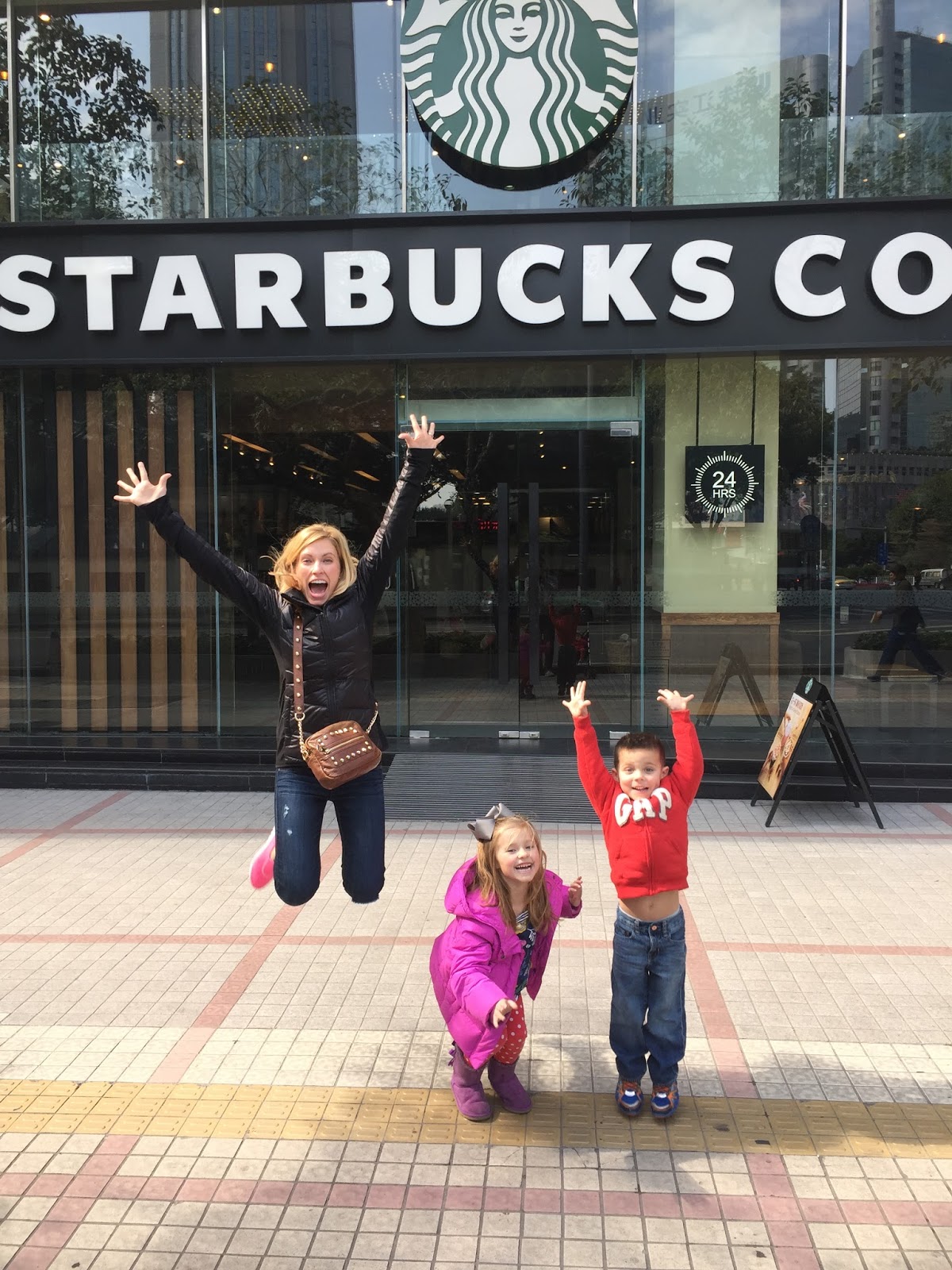 And we ended our afternoon on this note.
Life is pretty good in Guangzhou :).
Tonight, we are finally eating Mexican food!  Woohoo!!  These Texans are having major salsa withdrawal!
One last thing, many of you have asked about Ashby’s name.  The province where Ashby was arbitrarily gave her a name when she was found and that is what’s on all of her legal documents now (like her Chinese passport).  Once we get her back in the US, we will quickly get her officially adopted (right now, we’re legal guardians) and her legal name from here on out will be Ashby London Shull.  She is getting a US passport ASAP because the Shull family has some traveling to do this summer!
In the orphanage, they called her by her legal name until they knew we were naming her Ashby and then they referred to her as that.  She responds to her name very well already.
I’ve blogged this before but I can’t remember where (or else I would link back), so I’ll do it again.  Andrew and I love to travel (love, love, love it!) and our favorite city abroad is London, so to honor our love of travel, we gave all of our kiddos British names…
Kensington (is a borough in Central London) Kate (we picked this name before Will married Kate)
Smith (a common British surname) William (a very common British name…so we coincidentally have a William and a Kate…they were both born before those two got married, totally random!)
Ashby (a common British surname) London (obvious, right?)
There you have it!  When we set out to adopt and started the process on June 30, 2013, we knew we were looking for our Ashby London.  It took us almost 18 months but we found her…and she is very much OUR Ashby London.
XO
Click here to see Days 14 &15.﻿ Fifty Two Shades of Shay: Let’s All Be Brave