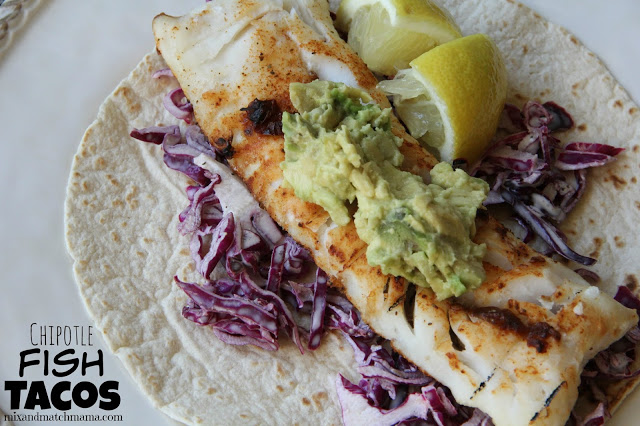 Oh how I love a fish taco.
Fish Tacos are one of those things that sound weird until you have one…and then you understand that they’re the best things ever.
We used Cod for these grilled fish tacos but any nice firm white fish will do.  I mean…they’re just so good (and easy too!).  I’m thinking you should make some this weekend…
This recipe makes enough for four fish tacos.  Instead of salt and pepper, I season with Old Bay Seasoning (found on the spice aisle).  If you don’t have that at your house, you can sub basic salt and pepper for this recipe.  The Chipotle is the real star flavor, so it’s not necessary that you use the Old Bay.  That being said, if you have it, use it.  If not, just a bit of salt and pepper.

Shopping List
4 (6 to 8 oz) cod fish fillets
about a tablespoon or so of Old Bay Seasoning between all four fillets
1 (7 oz) can of Chipotle Peppers in Adobo Sauce
the juice of one lemon
Large flour tortillas for serving
For the slaw:
1/4 cup real mayonnaise
1 tablespoon Cider Vinegar
1/2 tablespoon sugar
a pinch of salt and pepper
4 cups of shredded purple cabbage
To garnish:
2 avocados smashed with a fork to garnish (optional)
Lemon wedges to garnish (optional)
Preheat your outdoor grill or indoor grill pan to medium heat.  While the grill is heating up, I would probably make the slaw first and let it sit in the fridge while the fish are on the grill.
In a mixing bowl, whisk together the mayonnaise, vinegar, sugar, salt and pepper.  Add in your purple cabbage and coat everything in your mixture.  Cover and refrigerate at least 10 minutes (up to an hour).
Next, take each fish fillet and lay it out.  Sprinkle down your Old Bay Seasoning (or a bit of salt and pepper) over both sides of each fillet.  Set aside.
Remove two Chipotle peppers from the can and chop them up (the Adobo sauce will be on them and that’s okay!).  The chopped up peppers will almost make like a paste on your cutting board.  Spread a little of this Chipotle mixture on to each side of each fillet.  Chop up another pepper if you need a little more (several peppers are in each can).
Slice your lemon in half and squirt a little lemon down over the tops of each fillet before taking them to the grill.
Grill up each side of your fish (about 4 or 5 minutes per side).
Remove from grill and assemble your tacos: tortilla, slaw, fish, a little mashed up avocado and another little wedge of lemon.
These tacos are loaded with flavor!  The spicy fish fillets next to the creamy slaw are just so good!  I promise…this is the kind of recipe you will make over and over again this summer.
Enjoy!