Life lately has been eventful…but not necessarily in a good way.  We’ve had a crazy week and this mama is just happy to be on the other side of it.  Let’s recap… 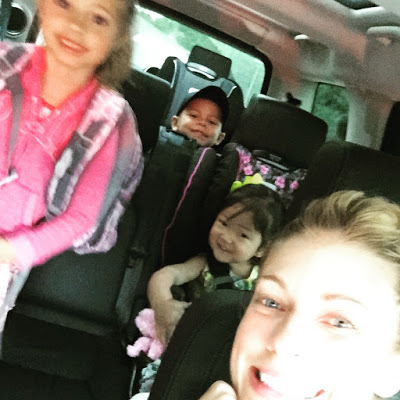 My next resume will say “professional chauffeur”, and I don’t mind one bit.  I’m always dropping someone off or picking someone up.  This is Kensington just about to step out of the car to head into school.  Love those three smiles. 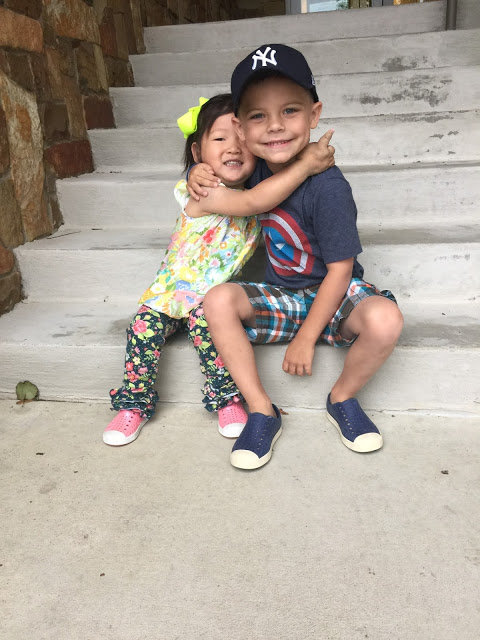 Because Kensington is in school every day, it’s typically just Ashby, Smith and me.  These two are so sweet together.  Smith has turned into one rock start big brother! 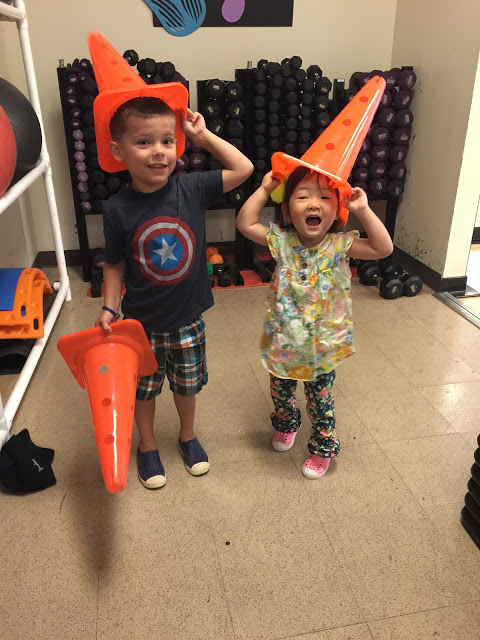 They help me get my stuff out for my class at the gym.  My little cone heads :). 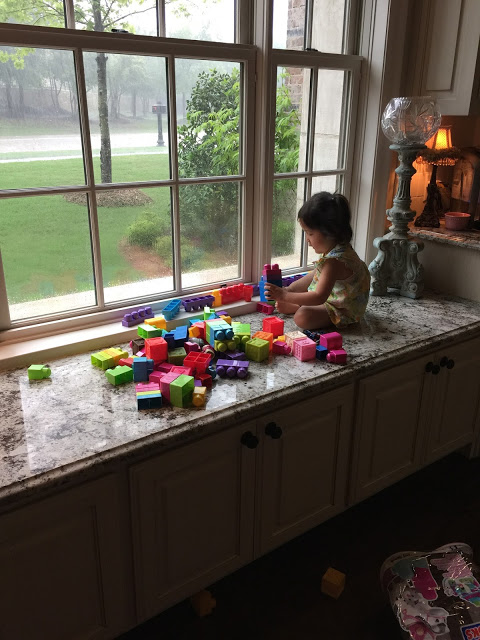 See the rain?  We’ve had more rainfall so far this year then we had in all of 2014.  It’s pretty much rained non-stop for 8 weeks.   Ashby loves to sit up near the window and play while I make dinner.  Sweet girl. 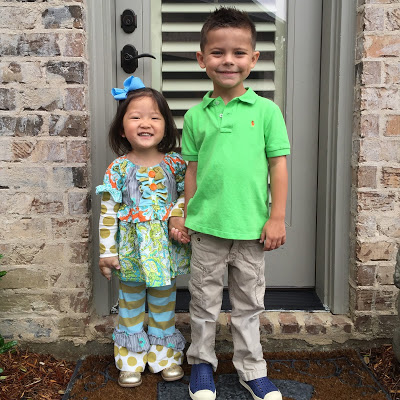 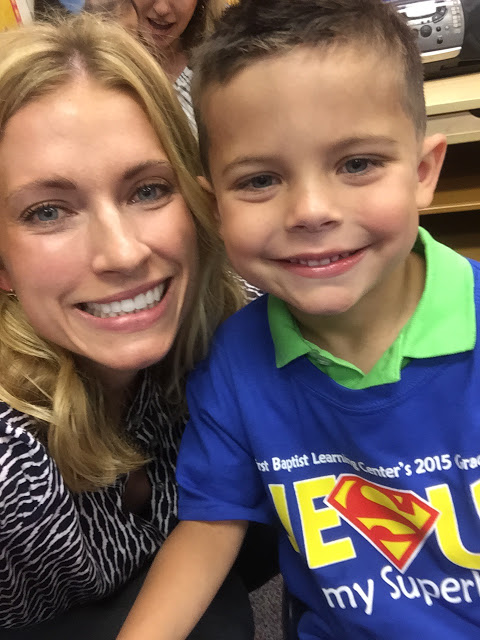 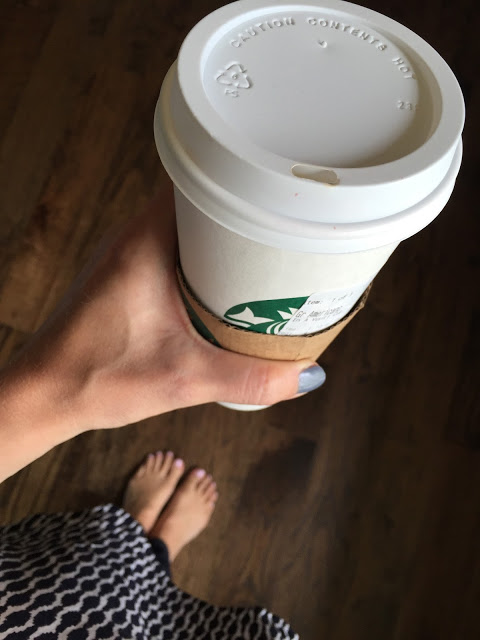 Flowers will never be the way to my heart…my hubby surprised me with coffee during the day.  That’s true love. 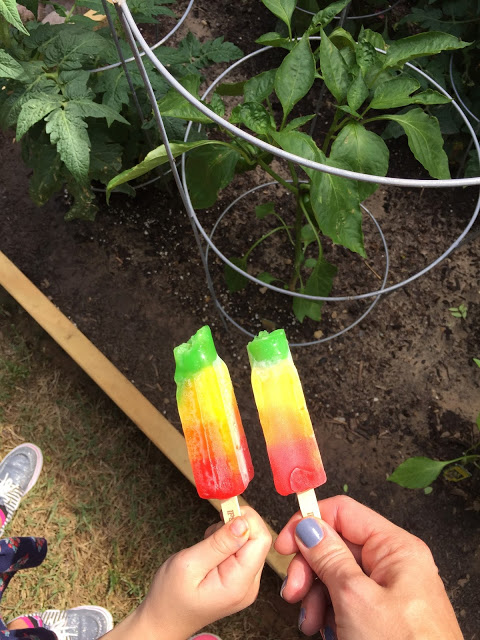 Kensington and I eating popsicles and checking on our veggies after we walked home from school. 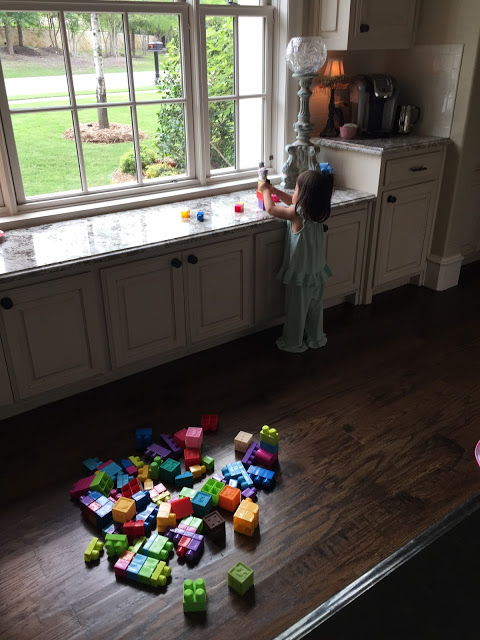 On Thursday evening, I was making dinner and randomly snapped this picture of Ashby.  About 10 minutes after I took this picture, everything got a little crazy.
Ashby has a Vascular Malformation (which means her heart created more veins on her right side going down her right arm into her right hand).  The biggest concern for Ashby are blood clots.  These aren’t the kind of blood clots that are fought with aspirin. These clots form because she has an abundance of blood trying to get through her arm and her blood can get stuck and stagnate therefore forming a clot.  They’re concerned about clotting all over her right side but the doctor told us at her last visit that up near her right armpit is the most dangerous place because that’s where the top of her right lung is.
Well…right after I took this picture of Ashby, she turned around and said “ow Mommy” and pointed to this egg-like bulge coming out of her right armpit.  We have been instructed to take her to the ER any time we think she might have a clot, so we immediately took her straight to our local ER.
Let’s talk about how amazing God is and the blessings that came from this situation:
The ER doctor that was on call when we arrived is a great guy we know from church.  He is perhaps one of the most serious and intense (while sweet at the same time) guys I know…and I about cried when I realized he would be seeing her.
They called in a radiologist and sonographer to do a sonogram that lasted an hour.  I held Ashby the entire time they looked around and they seemed very convinced it was a blood clot.  Meanwhile, I noticed on her chart that was open in front of me that at the top, it said Emergency Care level 1 2 3 4 5 and on her chart 4 was circled.  In my mommy brain I was thinking “four!”.  That’s really close to five and I’m assuming gunshot victims and such are fives…so a four is pretty freaking close and I don’t want my baby to be a four.  You know…I was all rational and stuff while I sat there…
The radiologist and ER physician really couldn’t see through Ashby’s “normal” in order to gauge what the bulge was.  They showed me with the sonogram one particular spot where you and I would have one vein but Ashby had at least 30.  So, at this point, I had already called Ashby’s doctor at Scottish Rite but it was 9:00 PM and they said they wanted to call him back themselves before they transferred her to Children’s Medical Center in Dallas.  Thank you Lord for modern technology.  They were able to get Ashby’s doctor on the phone at home and he was able to discuss the sonogram they just did on Ashby AND view her MRI we just had done on Tuesday at home.  He reviewed both things and determined that she had a very swollen lymph node that was surrounded by a cluster of veins.  He told them to discharge us and send us to his office first thing the next morning.  Even though he wasn’t seeing patients the next day, he showed up to check on Ashby.  Thank you Jesus.
So…we went home around 10:00 and then went straight to Scottish Rite Children’s Hospital the next morning for him to look at her.  It was determined that she had a massive lymph node under her arm but no clot.  We were also able to go over her MRI with him at that time (2 weeks earlier than expected) and formulate a game plan for the future. 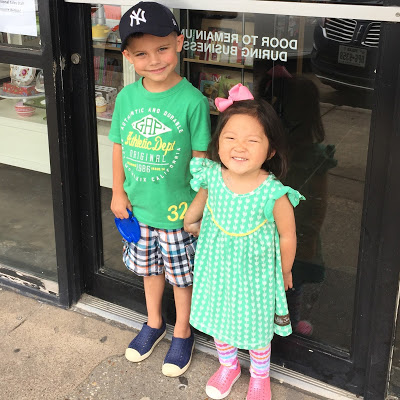 After we left Scottish Rite, we had lunch with these two and a massive amount of gummy bears.  Thank you Jesus for the health of my kids. 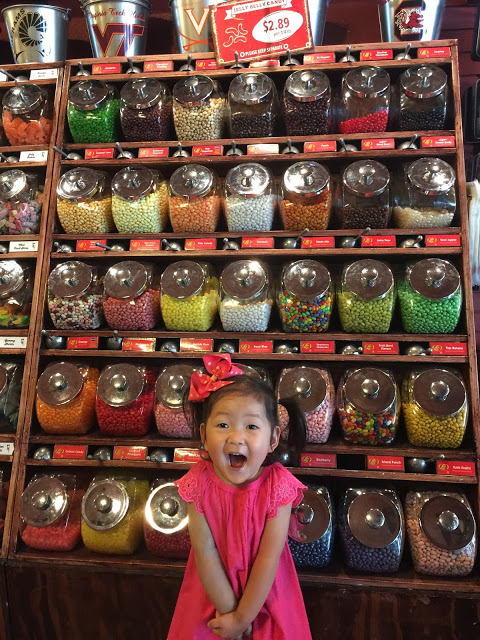 And then on Saturday, Ashby was like a kid in a candy store :). 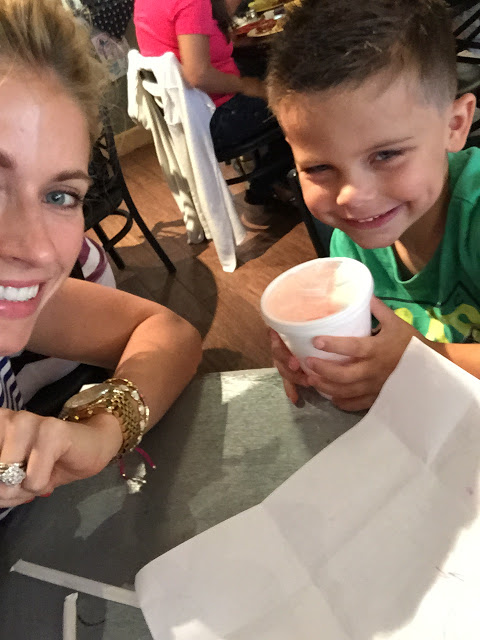 A diner brunch with my little family. 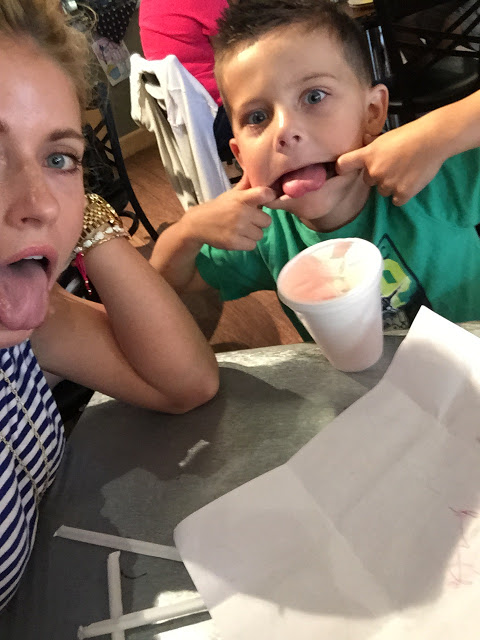 You have to indulge those boys ;). 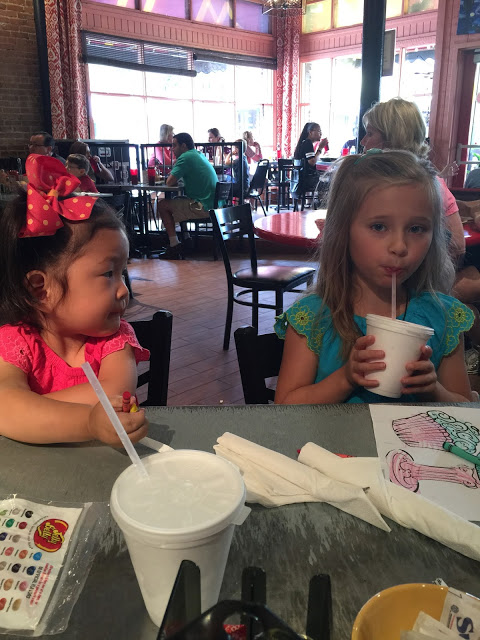 Look at her looking at Kensington.  True love.

Speaking of true love…this was my view from the recliner in our play room. 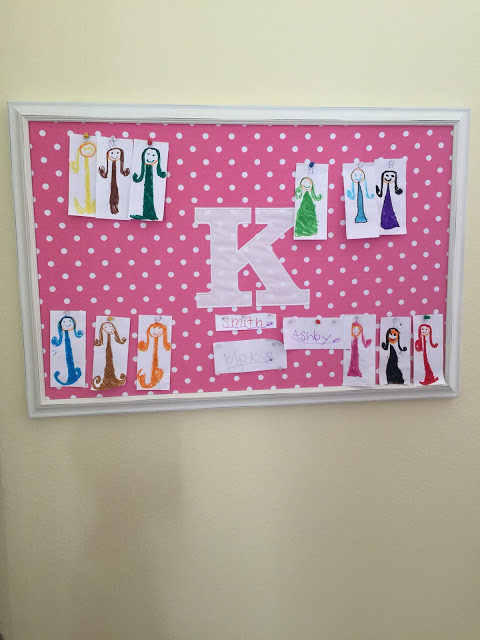 Kensington’s new bulletin board arrived on Saturday, so she spent Sunday afternoon fixing it up. 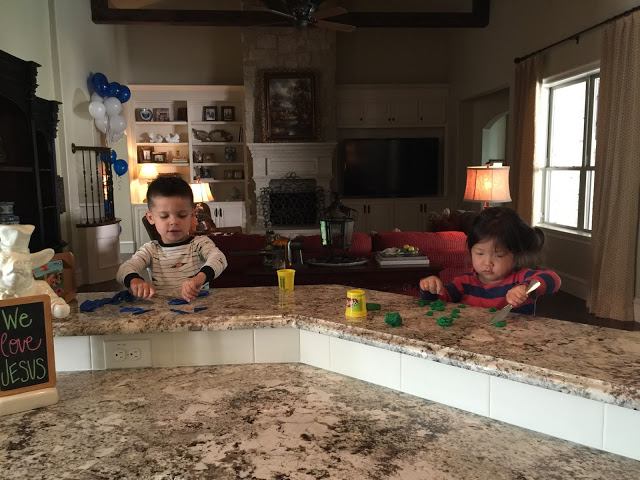 And on Sunday night, we introduced Ashby to Play-Doh.  She only ate a little bit of it…I consider that a win. 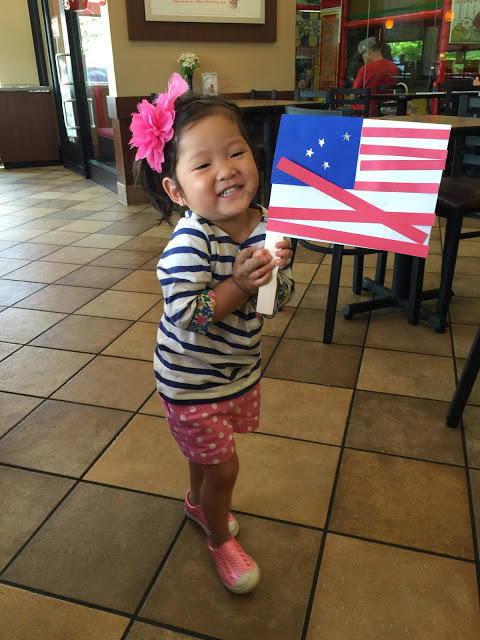 We met Erika and Narci at Chick-fil-a on Monday and they were having craft time.  My girl seems pretty proud of that American flag, right? 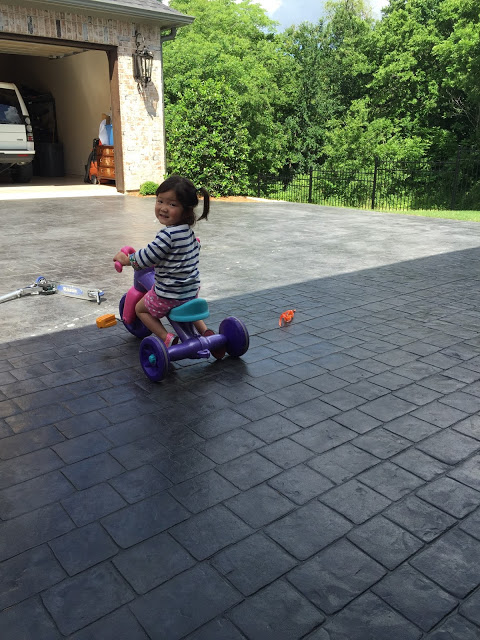 No rain!  We enjoyed a sunny (and HUMID!) afternoon outside. 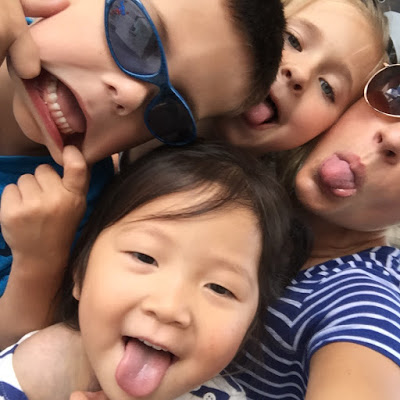 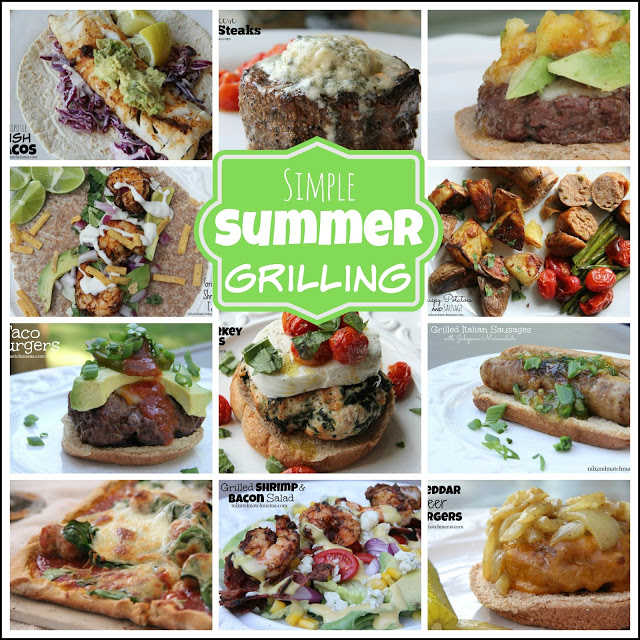 Click here to see my favorite recipes from the grill.