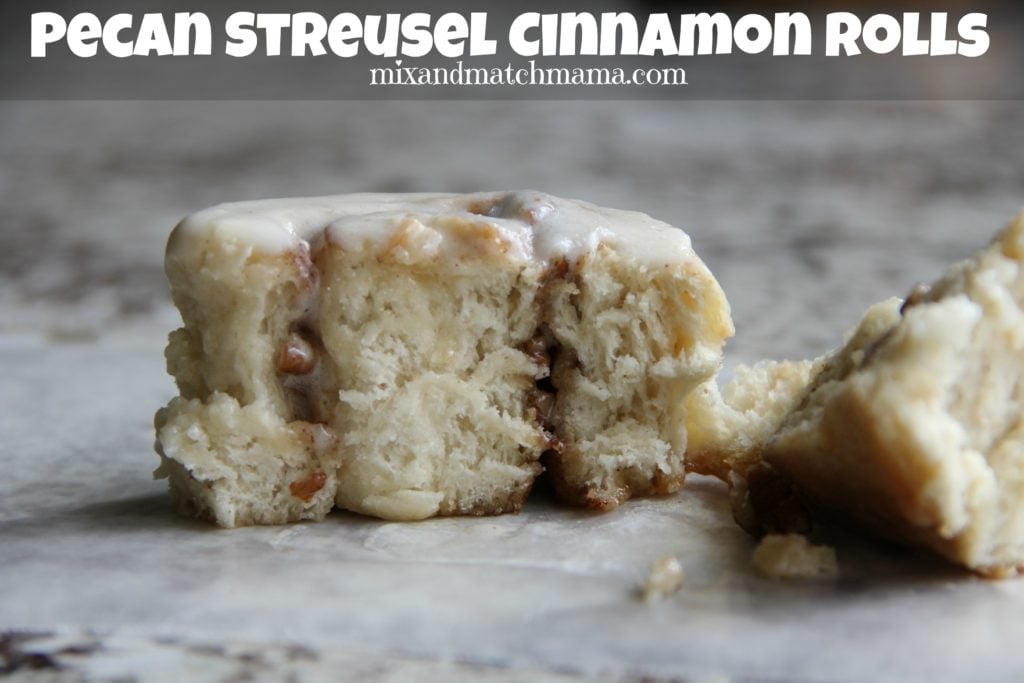 There are a million different cinnamon roll recipes out there…and this one is mine.  I like this one because it’s so simple, you probably have all of the ingredients on hand, it has a streusel center and it makes bigger cinnamon rolls (I like them larger).  Last Sunday afternoon, Smith wanted to make some, so we did.  I’ve kind of perfected this little recipe over the years and tweaked it to make it as simple as possible…because when your six year old boy wants to make them on a Sunday afternoon, he doesn’t want to wait around for something complicated 🙂 .

This recipe makes one 8×8 baking dish full of cinnamon rolls…about 8 rolls.  I use pecan pieces in mine, but if your family doesn’t care for pecans…you may omit them.

In a mixing bowl, whisk together 2½ cups flour, yeast, sugar and salt.  Set aside.

Pour your water and milk into one measuring cup.  Microwave this measuring cup for one minute.  As soon as this is finished heating, immediately beat this liquid into the mixing bowl followed by your egg.  Next, beat in your remaining cup of flour 1/4 a cup at a time (so beat in a fourth of the flour and repeat until you’ve done it for one full cup).  At this point, allow your dough to rest in the bowl on your counter about five minutes.  (Enough time to clean up a bit!)

Next, make your filling while you wait: in a small bowl, combine the softened butter, brown sugar, cinnamon and pecan pieces with a spoon.  This should make a very crumbly streusel mixture.  Set aside.

Sprinkle a little extra flour on your work surface and set your dough out on top.  Knead the dough with your hands for about 3 or 4 minutes before taking a rolling pin and rolling it out into a rectangle.  (The dough will be nice and thick.)  Sprinkle your streusel mixture down over the center of your dough.  After your streusel has been placed down the center, take one of the longer sides of the rectangle and tightly begin to roll it into a log.  Once it’s one big log, take a sharp knife and slice the log into 8 pieces.  Set each piece inside your prepared baking dish.  At this point, you want to cover your baking dish (I used a clean kitchen towel) and allow it to set and rise about 30 minutes somewhere kind of warm (I used the top of my stove because my hot oven had made the stove top warm).  Allow the cinnamon rolls to almost double in size.  After about 30 minutes, you’ll be ready to pop them in the oven (uncovered) for 25 to 30 minutes.

I really don’t think there is any breakfast (or snack) better than a cup of coffee and warm cinnamon roll.  Just so good! Whew! What a week…and a winner!