On January 17, this guy asked to sleep in my bed because “it would be so cool to wake up on my birthday in your bed” and because I can’t resist those blue eyes and that dimple, this happened that night… 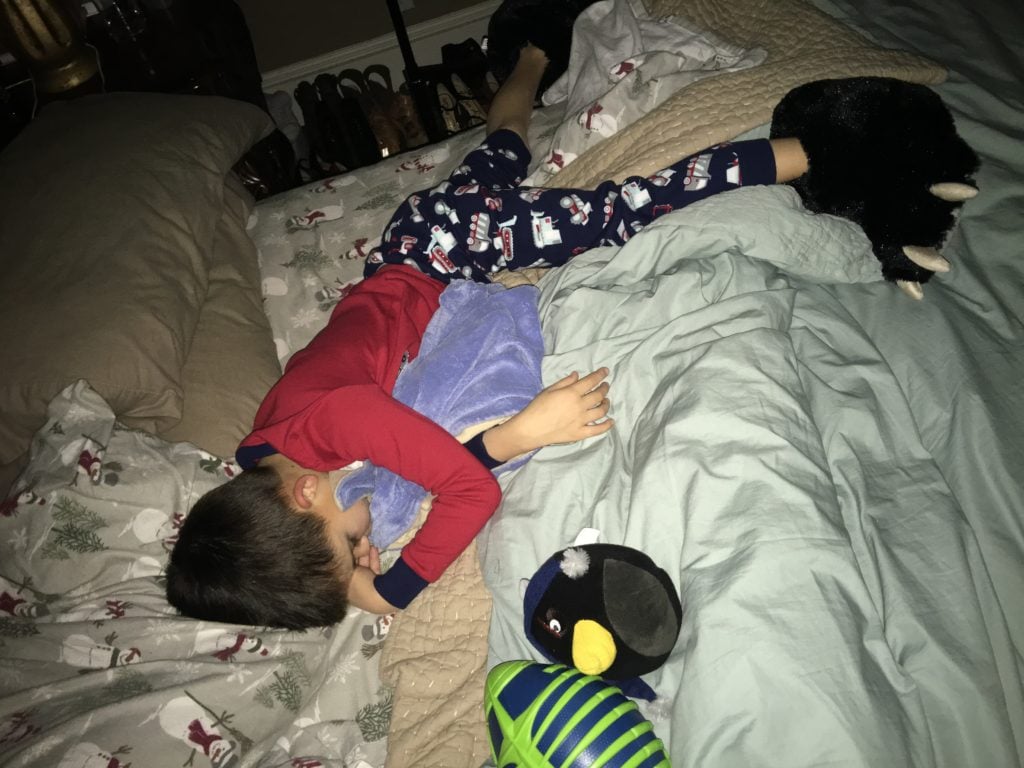 One boy, one football, one Angry Bird, a blankie and the biggest bear slippers you’ve ever seen went to sleep six and woke up seven.

(Side note, disregard my shoes in the background…we’re replacing the floors in our closet and well, they’ve had to make a temporary home next to the bed…)

So, the next morning, January 18, this guy woke up SEVEN!

And he wasn’t pumped at all about it 😉 . 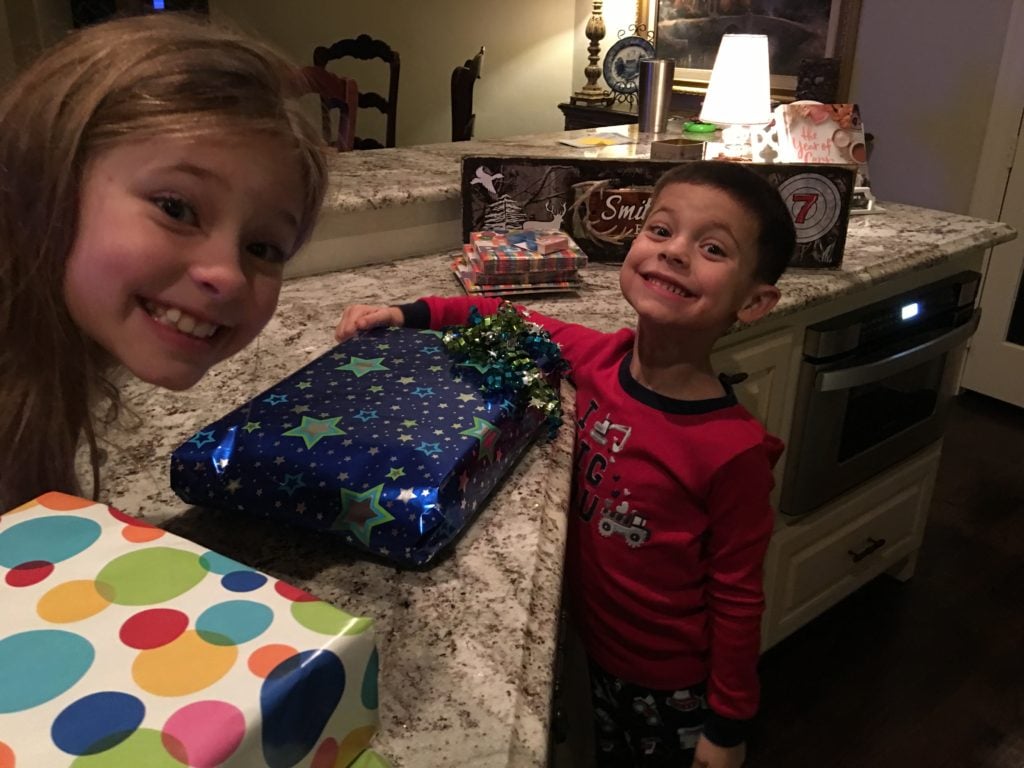 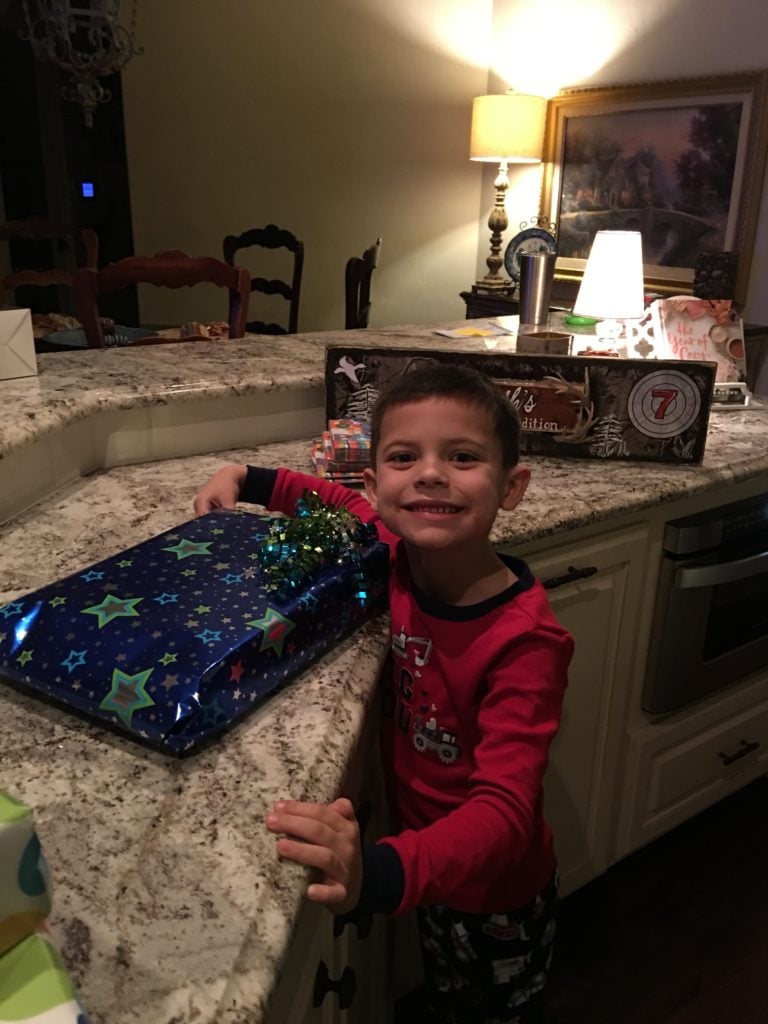 He requested waffles with butterscotch chips for breakfast and then opened the gifts from us before heading off to school.

Now, mamas of young kiddos who absolutely love planning your kids’ birthday parties and are dreading the day when they request their own theme and not the one you so painstakingly have planned via Pinterest, please listen to me.  I understand your passion.  I understand your love of creating secret boards and filling them up with ideas that you love and your kids have no input/opinion about…but please believe me when I say, one of these days, they will decide for themselves what kind of birthday they want AND IT WILL BE GLORIOUS.  I promise you, it will.  I used to think I would hate it…but you know what?  I love it!  1. They get exactly what they want (no matter how silly you might think it is).  2. It’s always so much less complicated than what you had in mind (because really…no kid cares if you’re up at 1:00 AM crafting together individual party favors).  3. There is zero pressure because it was their idea and not yours.  I’m telling you mamas to young kids…you should be looking forward to the day.  Which leads me to Smith’s birthday party on Wednesday… 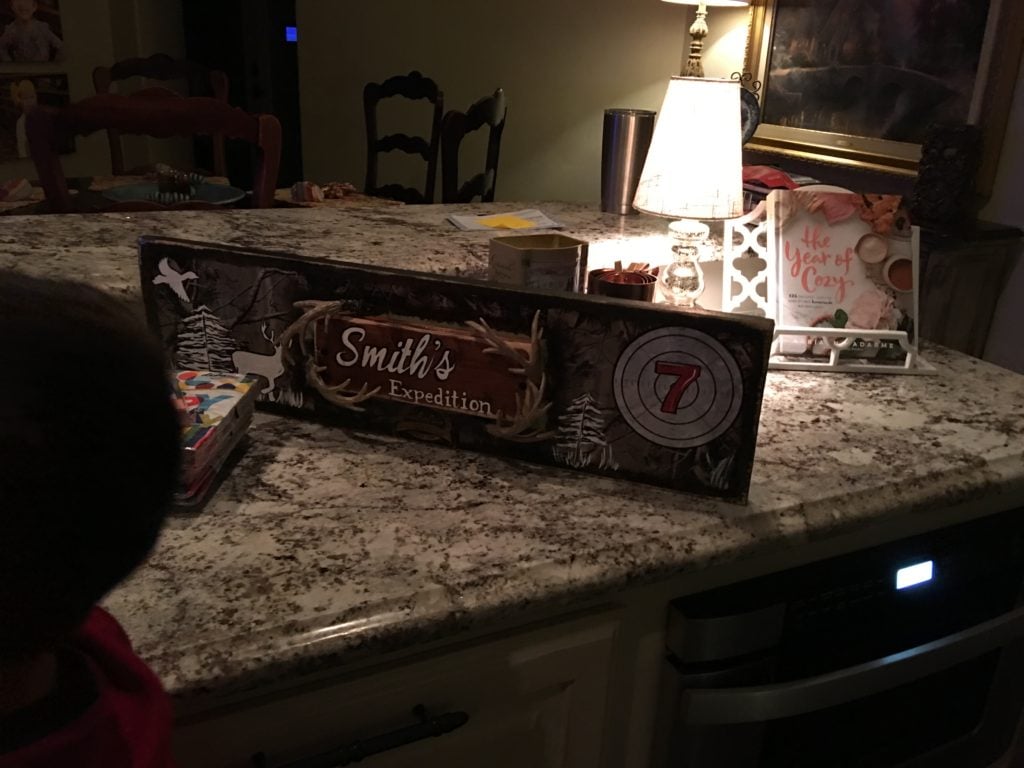 He wanted a hunting party.  In our city.  On a Wednesday night.  In January.  Now, I’m no hunter…but I don’t think any of that is really possible, right???  But that’s what he wanted.  He said he wanted lots of camo and hunting stuff.  When I asked him to dig a bit deeper and figure out how to make that happen, he said “I just want to take my friends to Cabela’s and walk around and then eat BBQ after like guys do”.  Done.  And done. 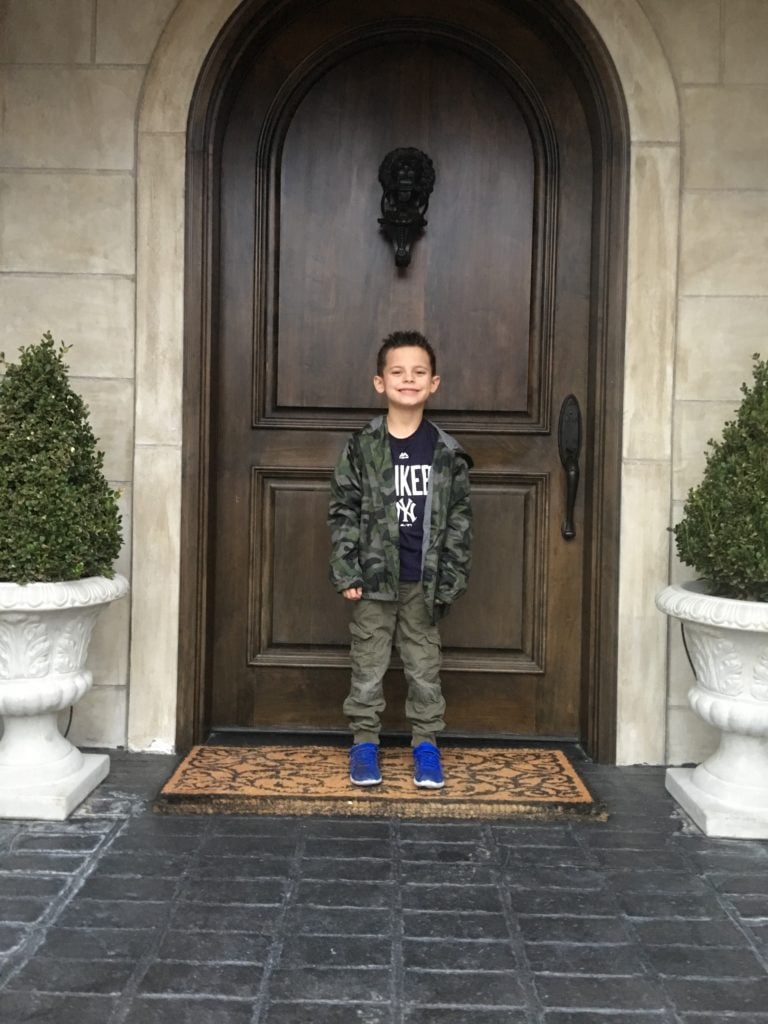 So, he set off for school in his camo jacket…because, duh?  And then I was going to pick him and three friends up after school for our birthday fun. 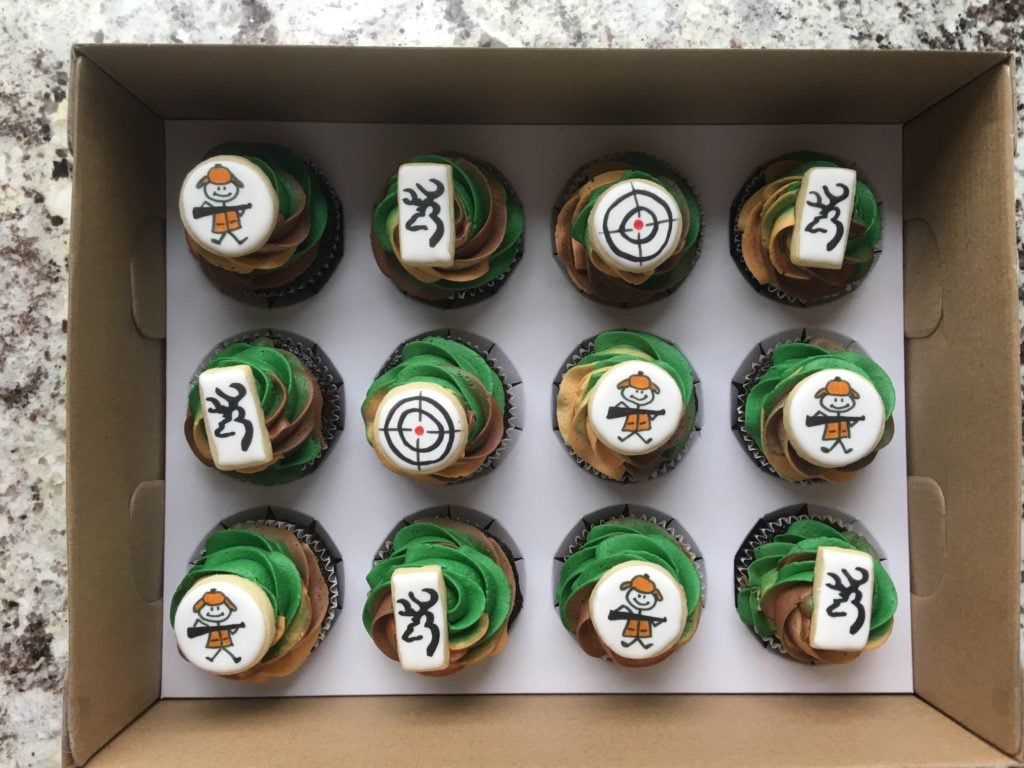 I went by that afternoon and picked up these adorable cupcakes from my friend Emily.  Hello?!  She somehow made camo icing!  How cute is that, right?! 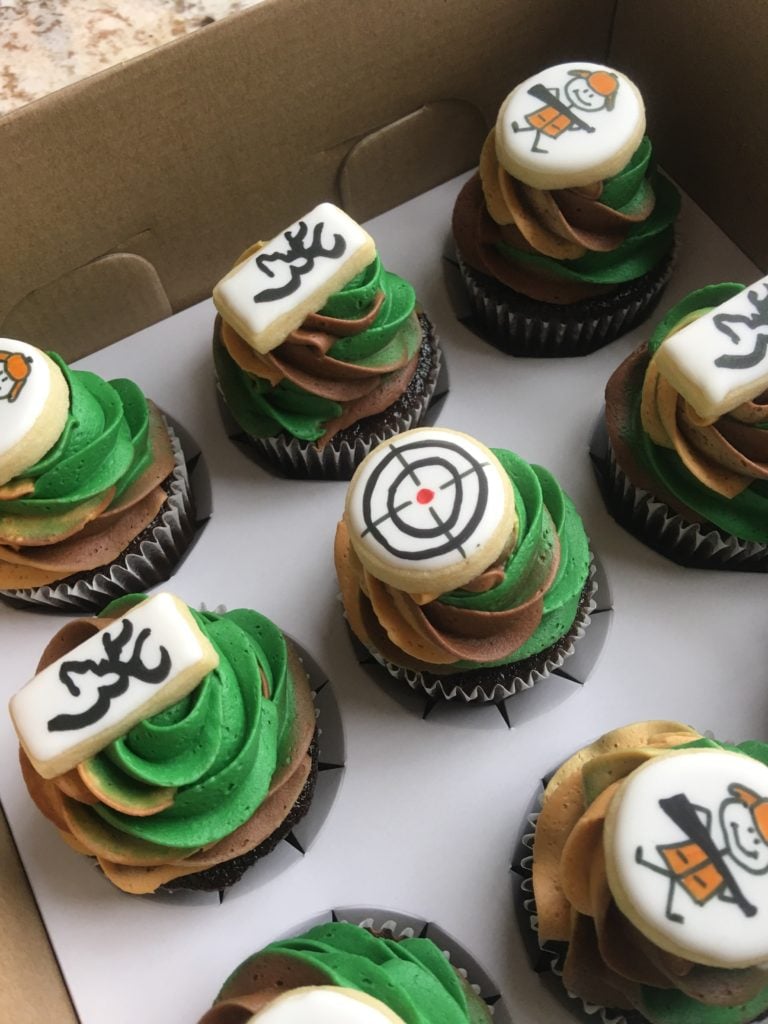 Emily is soooooo talented. I can make cupcakes…but I can not make cute little sugar cookie toppers that look like a work of art to go on top. 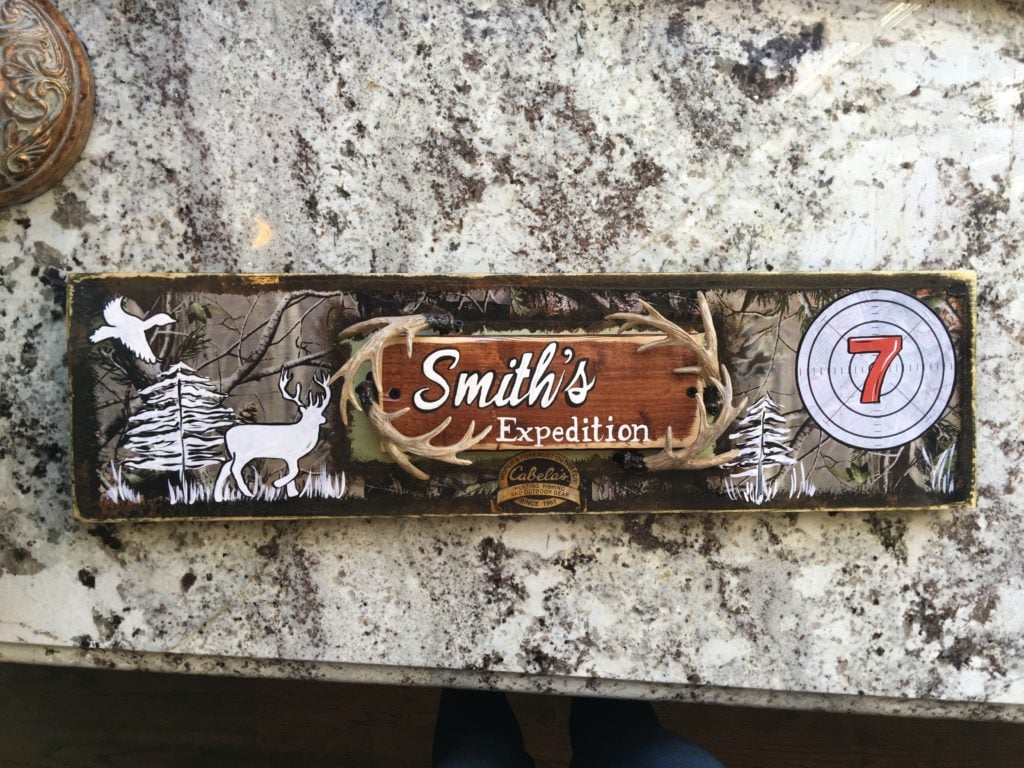 And every year, I add a sign to our birthday wall.  Didn’t my friend Amy do a fantastic job?! 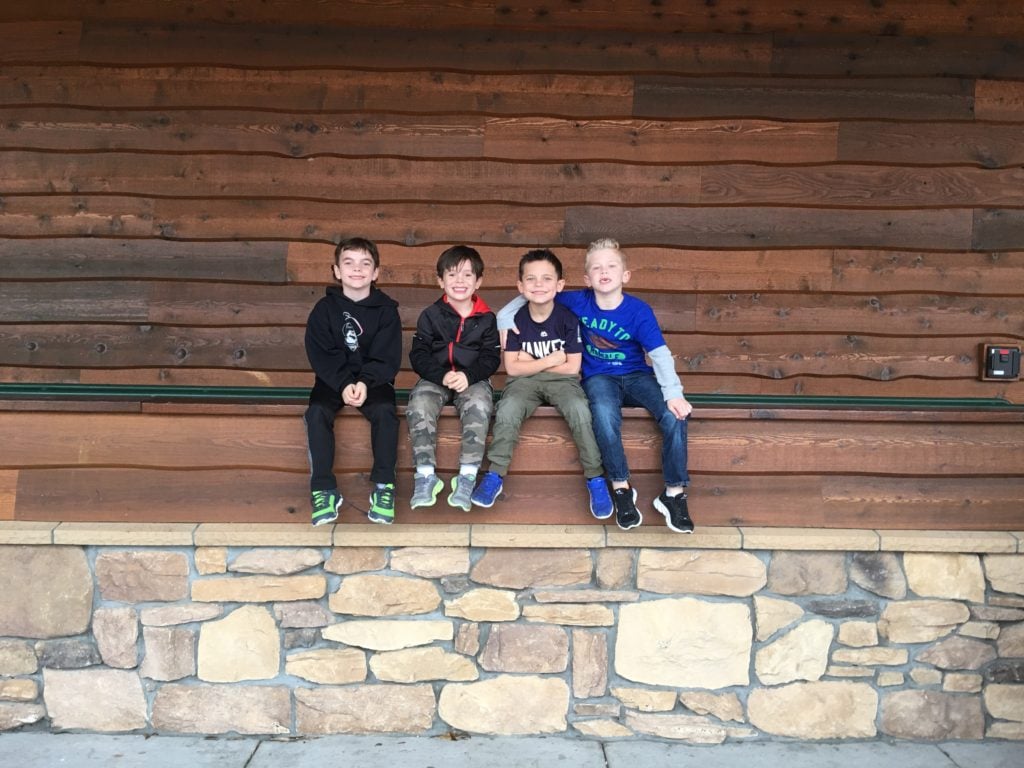 And then after school, Andrew and I took these handsome fellas to Cabela’s to “walk around and look at all of the cool stuff like the fish, boats and tents”.  #thispartywassoeasy 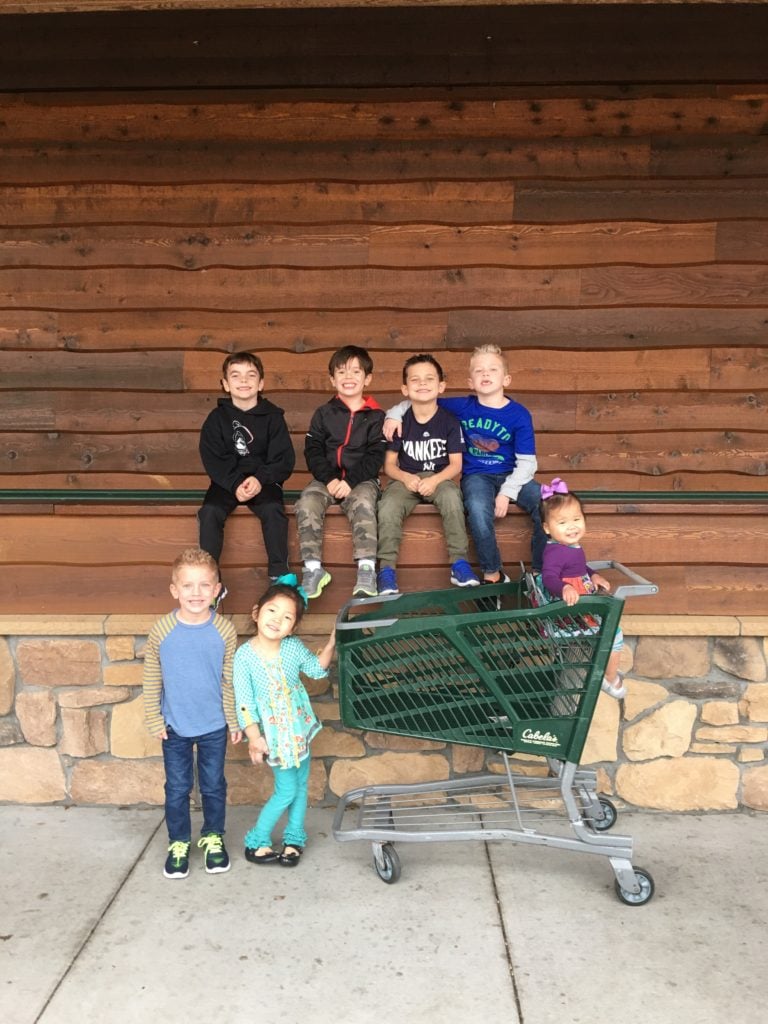 Kensington stayed behind with Ebby Lee for the talent show dress rehearsal but of course we had to bring Bowen too!  I laughed because I tried to get Bowen to be in the all boy pic above and he said no…he only wanted to be in pictures with Ashby.  How sweet is that?!  We roamed the store for about 45 minutes and let each boy pick a toy to take home as their party favor.  We actually had a lot of fun in there together!  They climbed in tents, they looked at the big boats, they saw the fish…it was a very outdoorsy time! 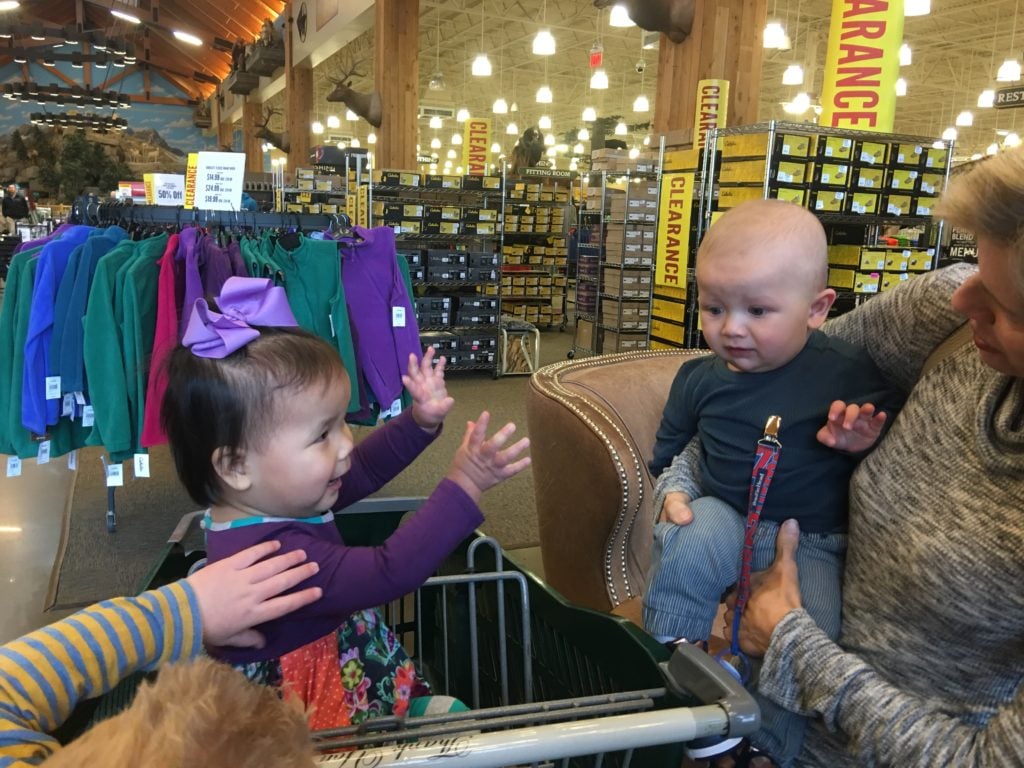 Lovie, Sean, Catherine and Samuel came too (Papa Jay was out of town).  It’s a shame Madeley isn’t in to Samuel… 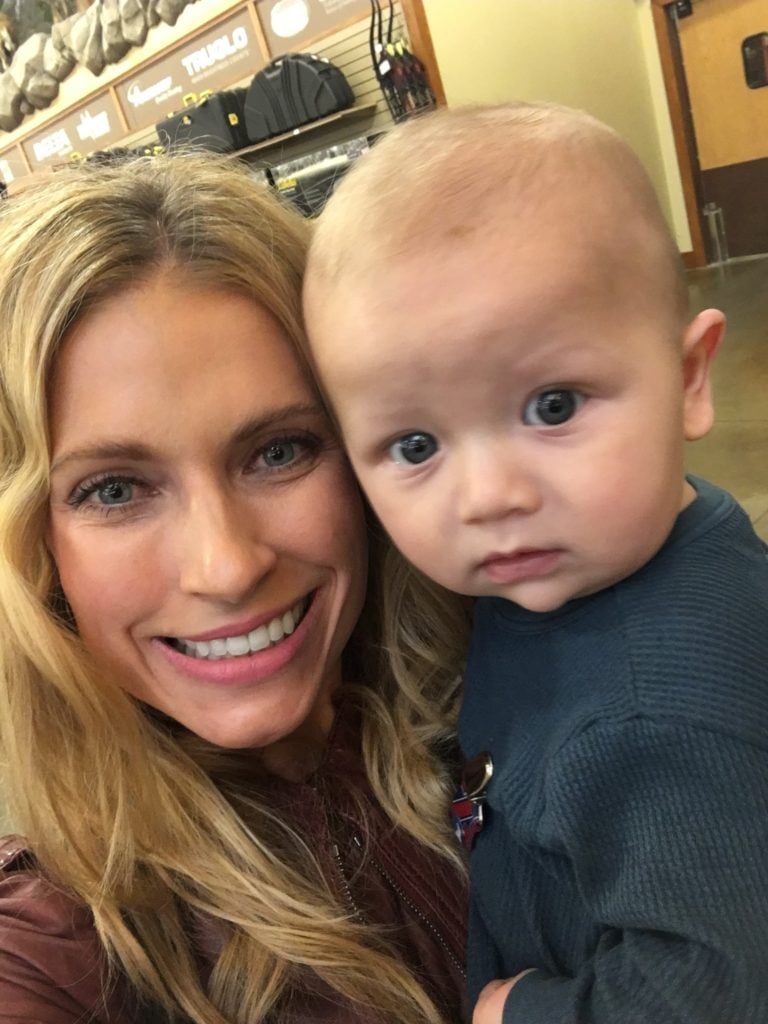 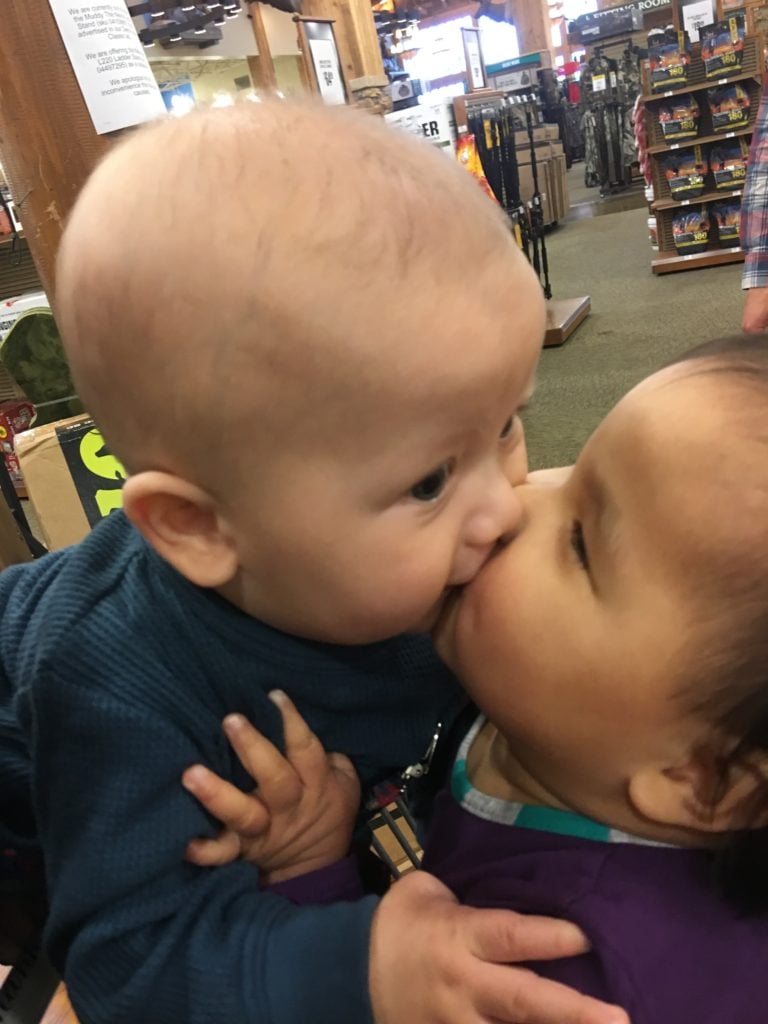 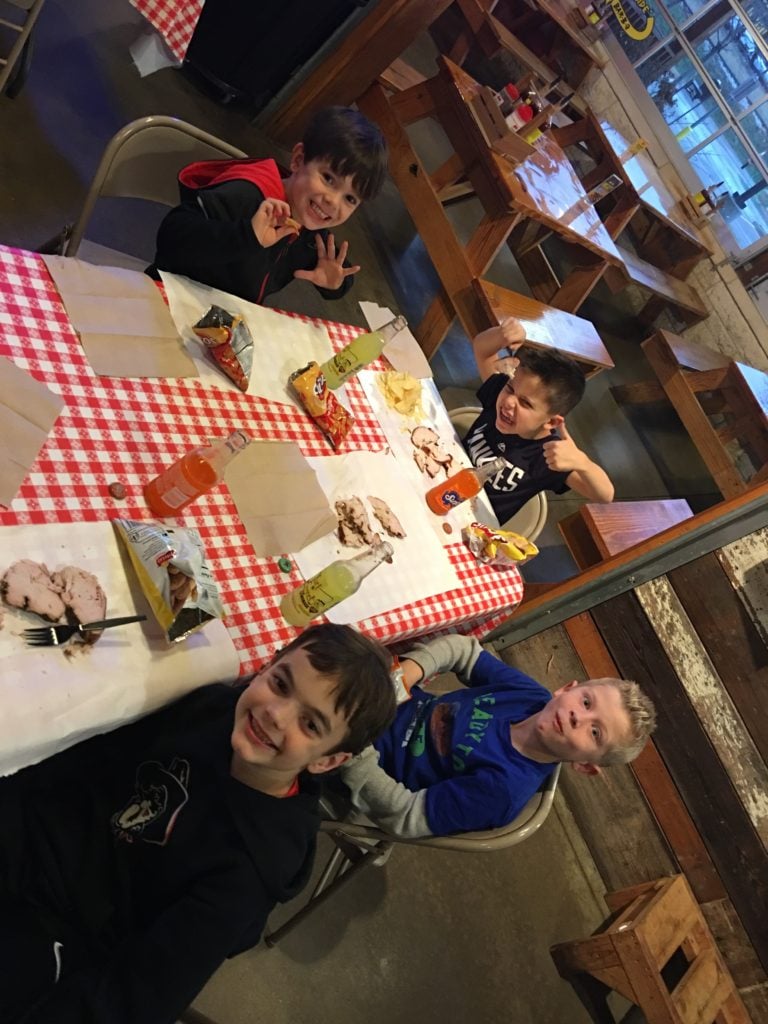 Right next door to Cabela’s is a great BBQ place, so we headed over and loaded up.  These boys were so much fun! 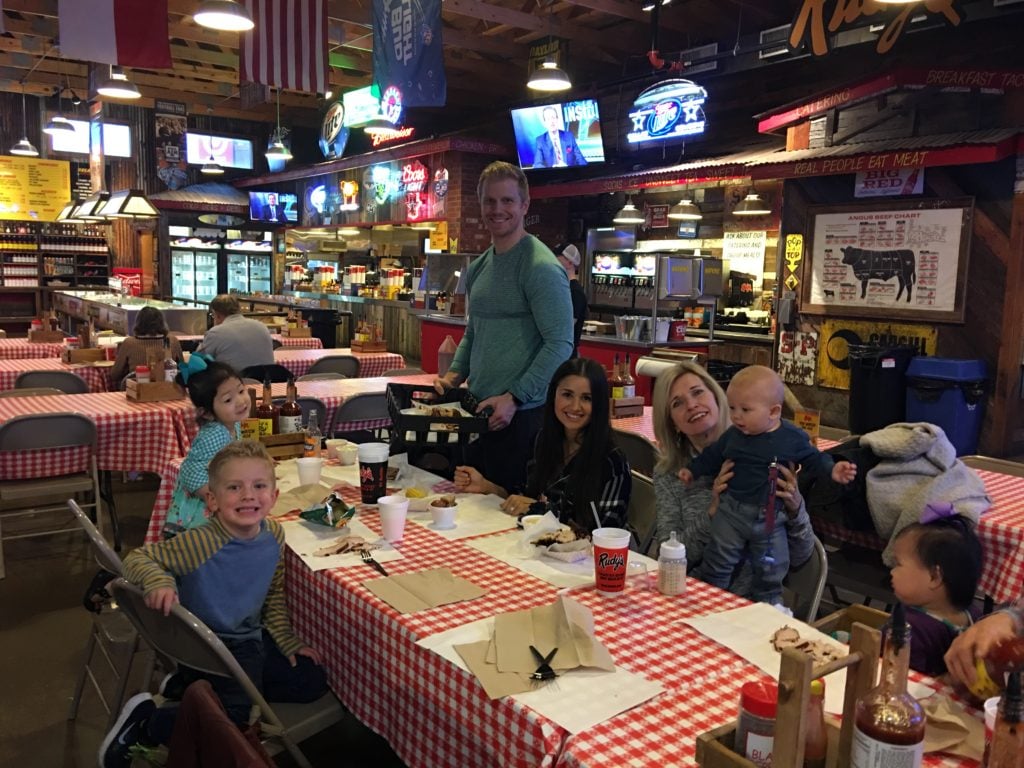 Love my family so much! 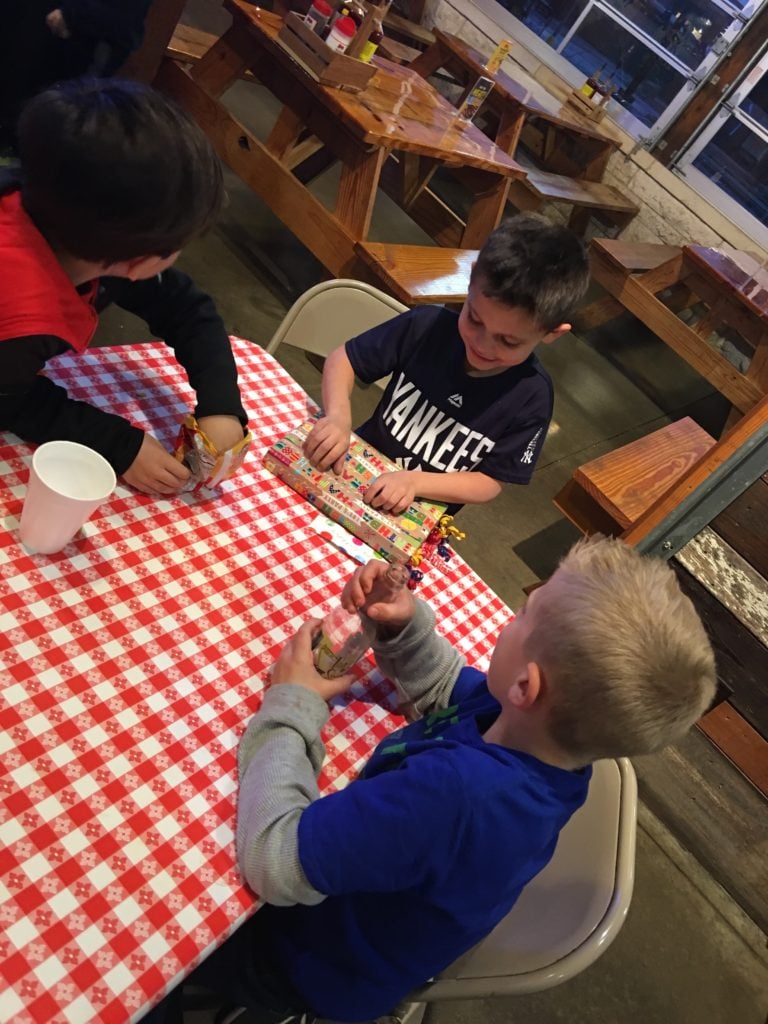 Smith opened presents from his friends and my family… 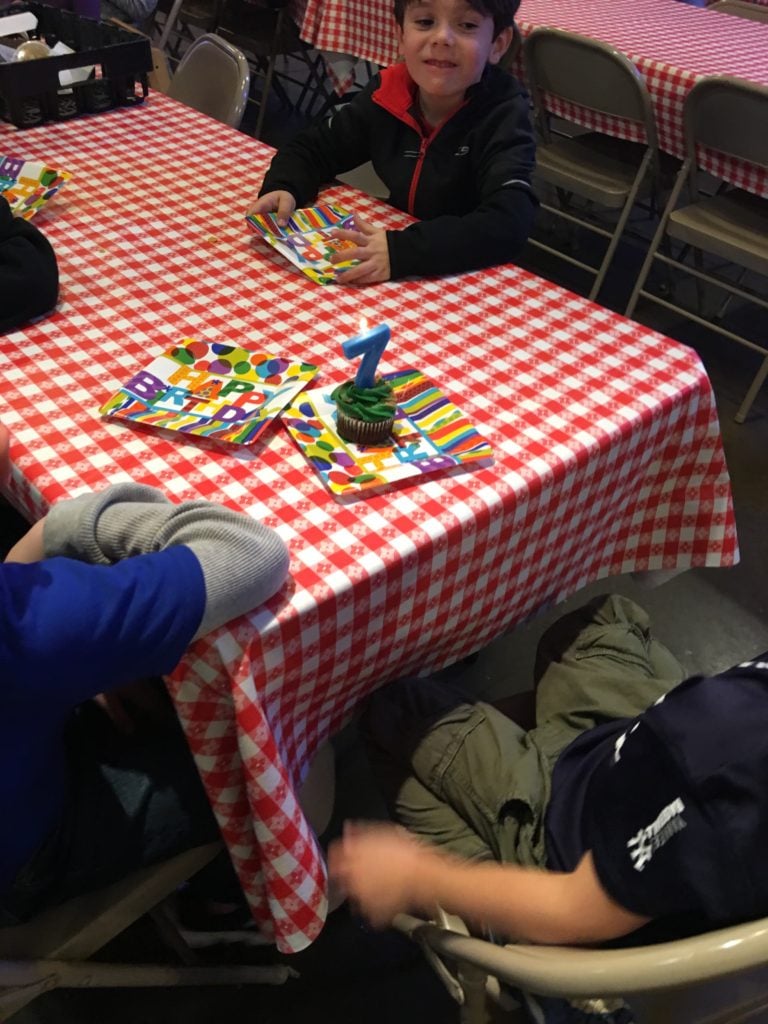 …and then it was cupcake time. 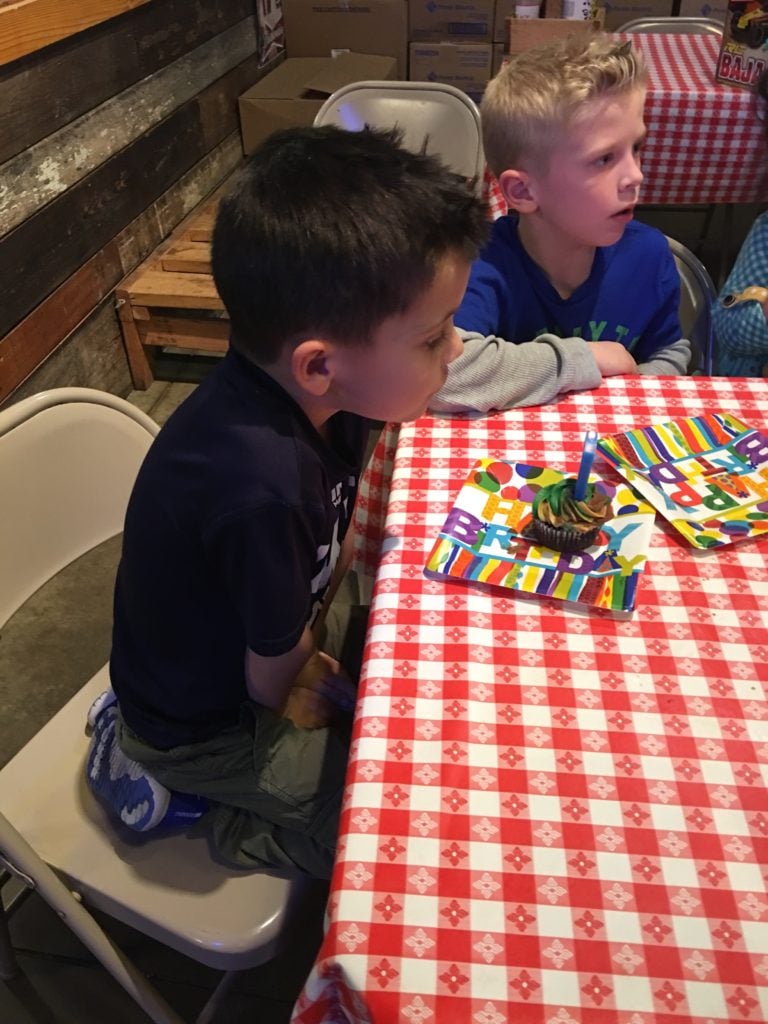 One other thing mamas to young kiddos…I know you’re tired, I know your house is probably a little dirty, your hair isn’t washed and you have laundry up to your eyeballs…but right this minute, go sit and snuggle your babies because I promise you, you are going to blink and they’ll be seven. 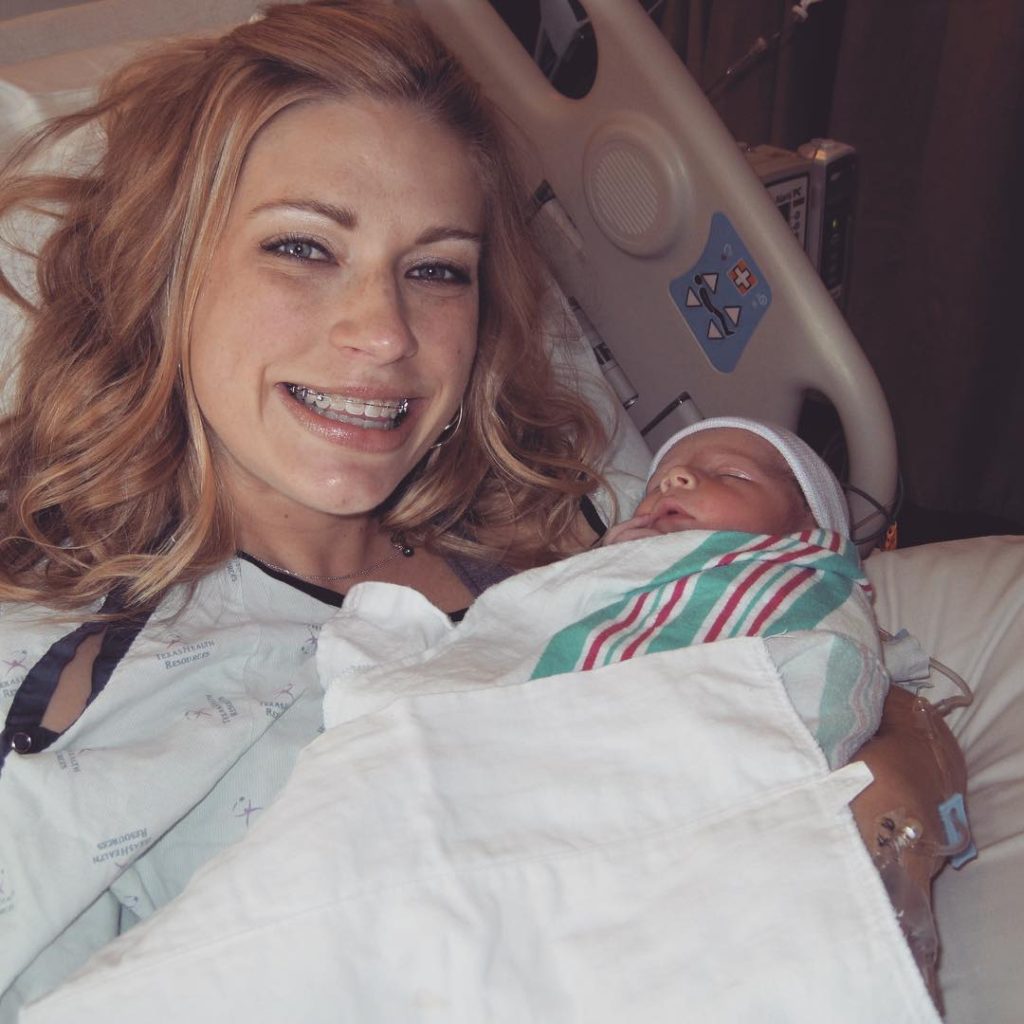 It goes by fast.

And if you link up with our What’s UP Wednesday, this week’s bonus question is a fun one!  This week, we want you to tell us which Bachelor is your favorite from year’s past.  Randomly over the weekend in Utah, we were behind Andrew Firestone in the security line at the airport.  Is he mine?!?!  Or maybe Bob?  Or Jason?  Or Ben?  I mean…maybe it’s that Sean Lowe guy???  Any way, that’s our bonus question this week.  Link up on Wednesday!