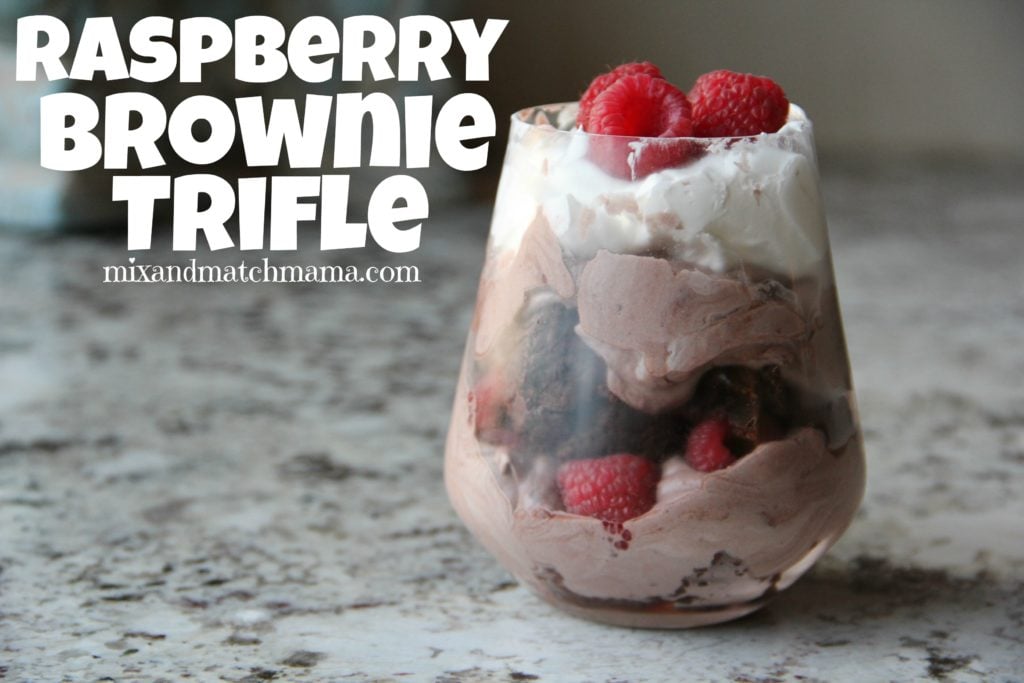 Need something sweet for your Valentine’s Day?  This right here is a real winner!  It’s really not even a recipe…it’s a method.  My Raspberry Brownie Trifles just look and taste like Valentine’s to me.   These are so quick and easy to make and bonus…they’re delicious too!  I made mine in stemless wine glasses, but you most certainly could make this in one big bowl or trifle dish instead.  Either way, you’ll love it.  Happy (almost) Valentine’s Day friends!

This recipe makes one big trifle or about 8 in a wine glass or small jar.

Shopping List
1 batch of brownies (either store bought or homemade), torn into big chunks
1 (5 oz) box of instant chocolate pudding
2 cups of milk (I used 2%)
2 cups of Cool Whip, plus more to garnish
1 cup of raspberry preserves
about 2 cups of fresh raspberries

Make sure your brownies are torn into big chunks, set aside.

In a mixing bowl, whisk together your chocolate pudding and milk for about two minutes.  After it starts to thicken up, whisk in your Cool Whip and raspberry preserves.

Next, sprinkle brownie chunks across the bottom of you individual serving dishes (or if you’re using a big trifle dish, sprinkle half of the brownie across the bottom) followed by several raspberries and a dollop of your chocolate pudding mixture (or in a large trifle dish, spread half of your raspberries and pudding across the layer of brownie and then repeat with the second layer of brownie followed by the second layer of pudding).  Add a dollop of Cool Whip on top of each individual dish (or across your entire large trifle dish) and garnish with a few more fresh raspberries.