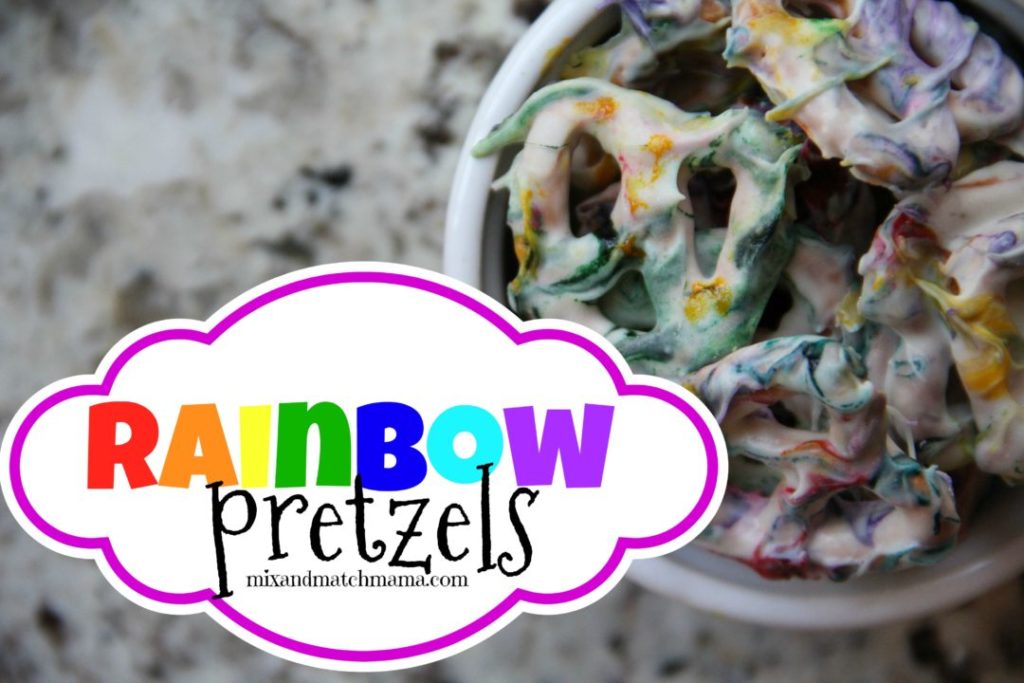 This isn’t even a recipe…it’s just something fun to do with your kiddos.

The other day, during Madeley’s nap, Ashby wanted to make something in the kitchen, but I didn’t have anything in particular to make, so I came up with these little Rainbow Pretzels and after we were done, I thought, they looked happy and bright and like something you could make for holidays like Easter or St. Patrick’s Day.  (Pssssst: they’re just chocolate covered pretzels…so, they’re really a no-brainer.)  That being said, Ashby had a BLAST making them and honestly, I had a blast eating a few with a cup of tea later that afternoon.  Make a big batch and wrap them up to pass out to neighbors, teachers, co-workers and friends this Easter season.  Rainbow Pretzels for the win!

This recipe makes a big ole batch of pretzels, but you can easily make as much or as little as you like by changing the amount of ingredients.

Place your pretzels in a bowl (I used about 8 cups).  Next, in a microwavable bowl, melt your candy coating making sure to stop and stir every 30 seconds until it’s melted (about 2 minutes total).  Next, quickly pour this white chocolate down over the pretzels in your bowl and toss them all together.  As soon as they’re covered, pour the pretzels out on to wax paper.  I took six different colors of food coloring and squirted them over the pretzels and then gently tossed everything together on the wax paper until the pretzels had color on them but were not murky brown from too much tossing.  Allow pretzels to completely dry before enjoying or storing in an airtight container.

I mean…super easy and happy!