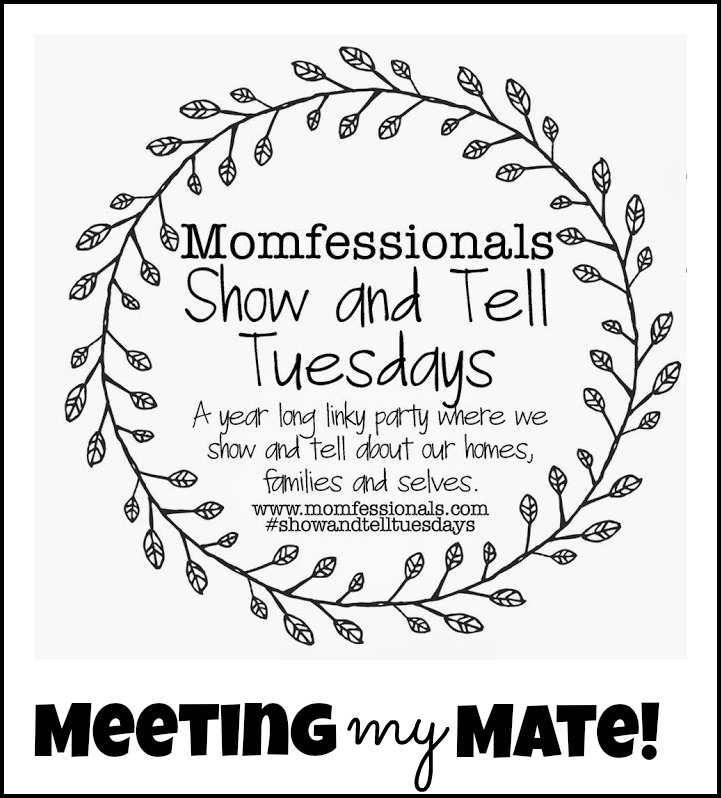 It’s Show and Tell Tuesday where I’m linking up with Andrea at Momfessionals…and today’s topic is how I met/got engaged to my mate.

I’m pretty sure I’ve told this story a few times on my blog before…but to me, it’s worth repeating :).

It’s how I met this guy… 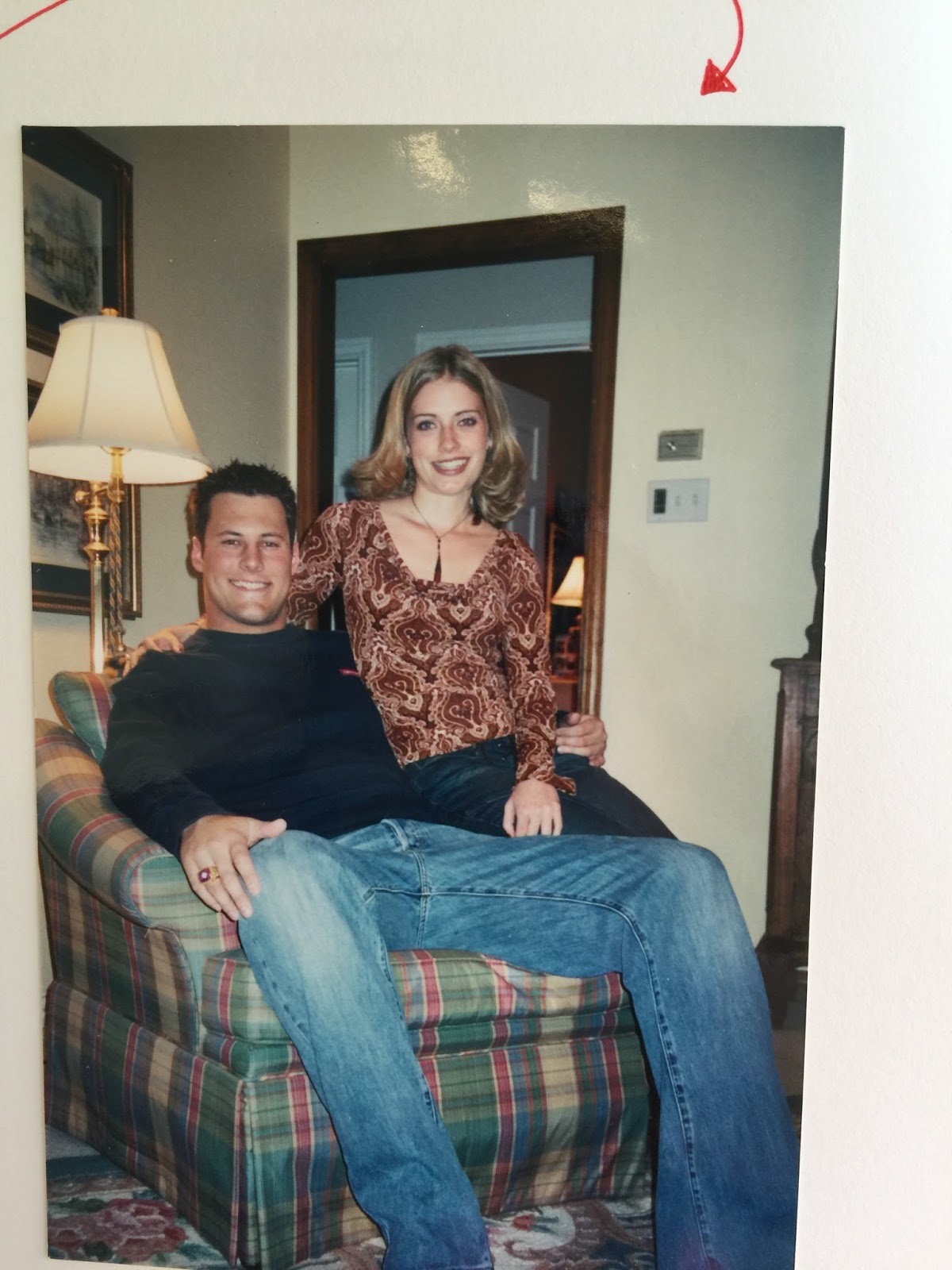 Ahhh…this was us when we were dating.
It was July 4, 2002 and I was in-between my sophomore and junior year of college.  Ten days earlier, I had told my sweet boyfriend of three years that I couldn’t marry him and was totally and completely heartbroken (I just knew he wasn’t the one, but it still crushed me.).  I had decided at the ripe old age of 20 that I would probably never get married and was living in that post-breakup funk.
Well, on this fateful Independence Day, my parents were on vacation with my aunt and uncle and I was staying at my aunt’s house watching her middle school and high school kids.  I decided to go check on my brother who was home from college and when I walked into my parents’ house from the garage, this really tall guy was coming out of the guest bathroom pulling a shirt on over his head.  He had this head full of dark hair, a lot of scruff and he was BIG.  Like defensive end big.  He introduced himself as Andrew Shull, a buddy of Sean’s from college who had come to hang out in Dallas and stay with him over the July 4th weekend (an older buddy…Sean was a freshman and Andrew was a junior).
I was still in my “I’m going to be single forever” funk, so I didn’t think much of it.  About 10 minutes later, I found myself in the kitchen grabbing something to eat when he walked in and we chatted.  I don’t remember much about what we said but Andrew says I had a slight attitude (which sounds about right) and he liked it (which sounds about right).  I just remember he was really nice but that he was 1. big 2. hairy 3. born and raised on a farm 4. and I was destined to be single forever (still having that pity party of mine), so I didn’t think much of it.
The next day, I stopped back by the house to let my parents’ dog out (aren’t you curious what Sean’s doing during these two days???  He’s sleeping.  Sean is sleeping.  I’m taking out their dog and chatting with his friend and Sean is sleeping…sigh.) and left this note for Andrew… 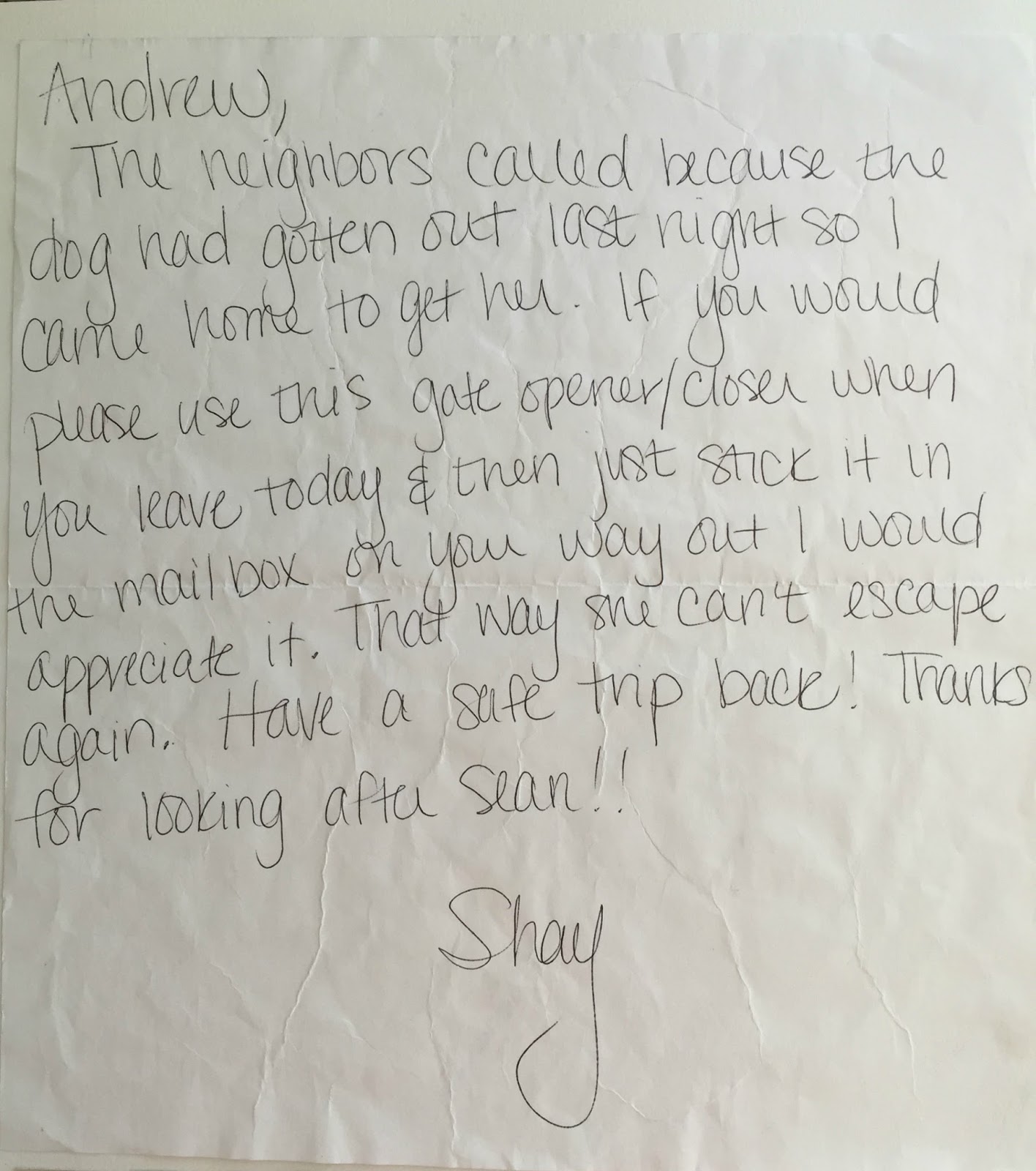 …and for some reason, he kept it.  He tucked this note into his bag and took it back with him to Kansas.  And all these years later, we still have it :).

I spent that summer getting over my boyfriend.  My friend and I went to Italy for a few weeks, I ate a lot of pizza, came home, studied some more and really, didn’t think much more of that big hairy farm boy from Missouri.

Then Sean had his very first Kansas State football game and I tagged along with my parents and grandparents.  On the 8 hour car trip to Manhattan, Kansas, I specifically remember telling my parents that this would be the one and only game I would be seeing that season.  Who had 16 hours to spend in the car each weekend to drive to Kansas?  Not me. 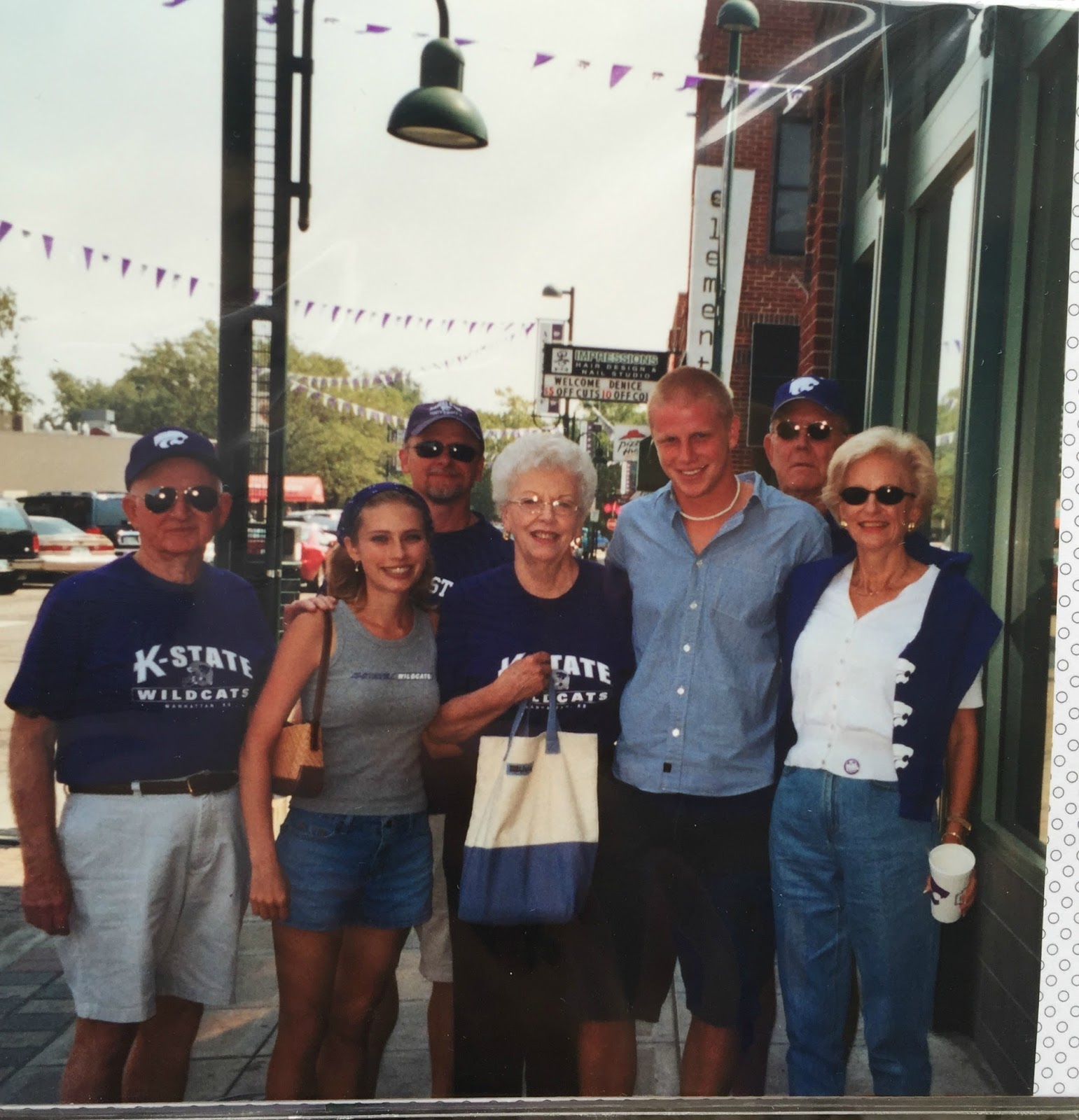 Walking into our first K-State game, we met this really hyper couple with enough energy for four people.  She had a head full of curly hair and he smiled non-stop.  They were funny, self-deprecating, really sweet and eventually, I would call them my in-laws.  Andrew had introduced Sean to them, so they felt like they knew us.  They also knew this was our first football game, so they took us under their wing (after all, this was their fourth season).  They told us to meet them in the football complex after the game and we could have dinner with them.

After the game, we walked past all of the fans and entered the football complex to wait for the players.  Being a lowly freshman, Sean came out first.  Because he was a leader on the team, Andrew was doing interviews and came out last…and the minute I saw him, honestly, I said “dammmmmmn” in my head.  That farm boy sure could clean up… 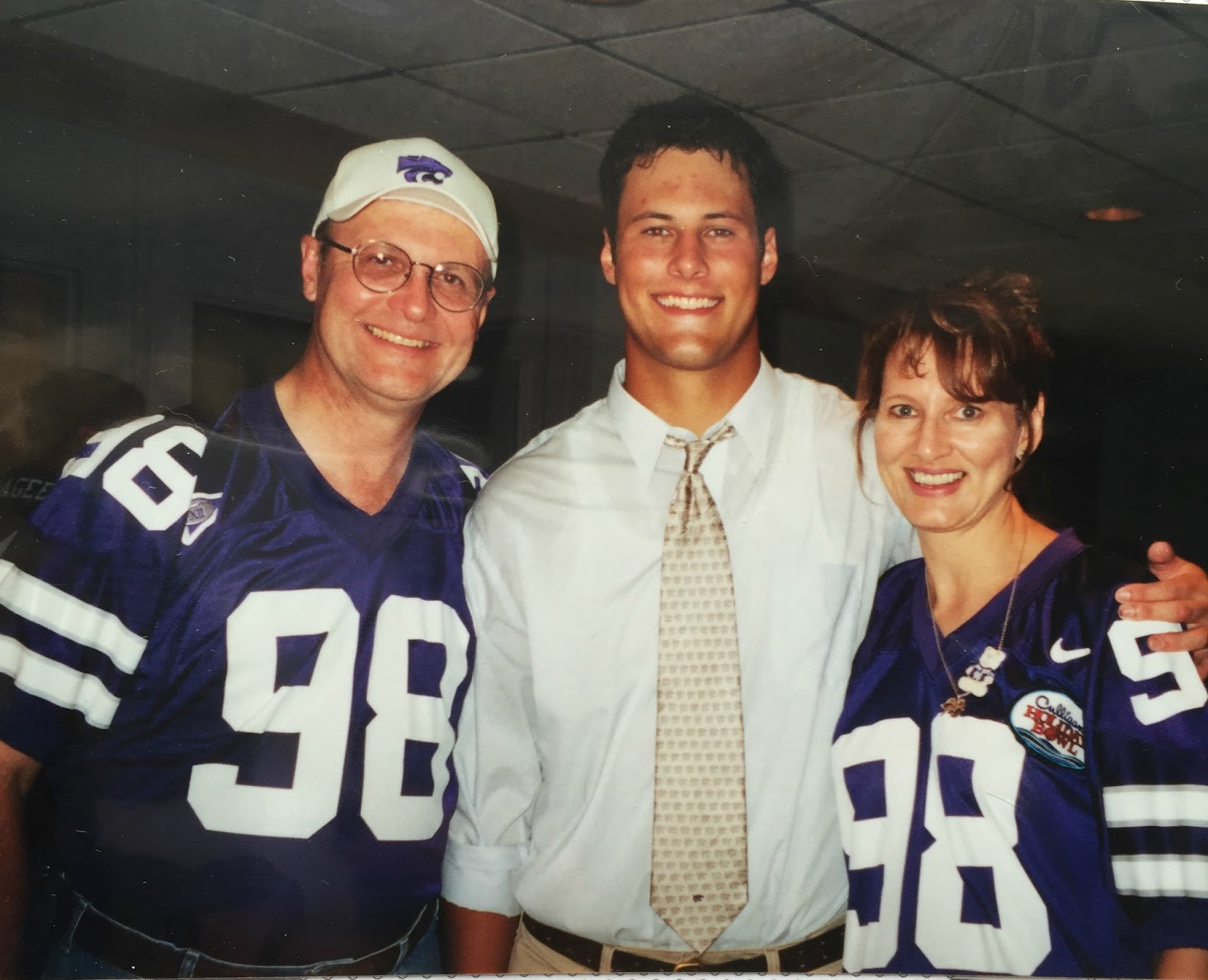 So, that night, we went to dinner with the Shulls and my entire family (my brother, parents and both sets of my grandparents). 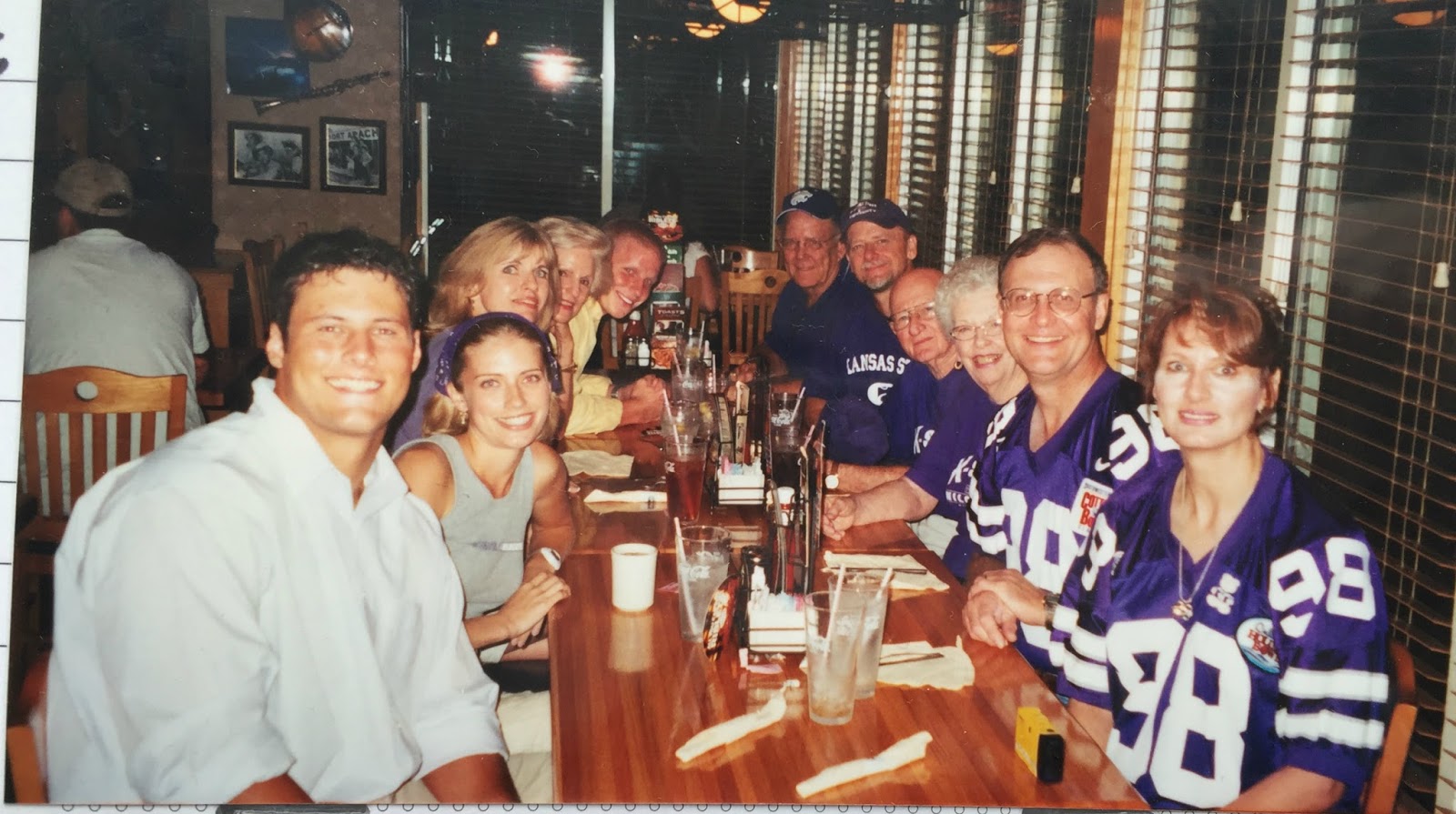 Here we are, eating our first meal together.

After dinner, Sean and I went to Andrew’s apartment and hung out a bit.  At some point, the next day, he got my number from my brother and started calling me.  It was Sunday and we were driving the 8 hours back to Dallas…and I knew that I would be driving back on Friday for another game.  The same chick who never wanted to go back to Kansas was ready to go back just 5 days later.

That Saturday, after the game, we went to dinner with our families again, but this time, just the two of us went for a drive around Manhattan before he took me back to our hotel.  As we were pulling into the hotel, he was asking me what kind of music I liked to listen to.  I told him that he would laugh because I’m nerdy, but I really love listening to Standards the most and that Sinatra was my favorite…and just like that, he lowered the visor in his truck and pulled out a Sinatra CD…and I knew right then that I was going to marry this boy.  He hadn’t kissed me yet, I didn’t know what he thought about me…but I knew.  I knew right then and there…he was my husband.

So, I drove to Manhattan, KS every single weekend from that point on.  After football season, I made the drive by myself.  Due to his off season schedule with workouts and such, he couldn’t be gone over weekends, so I drove to him.  Every weekend.  That 16 hours each trip was totally worth it. 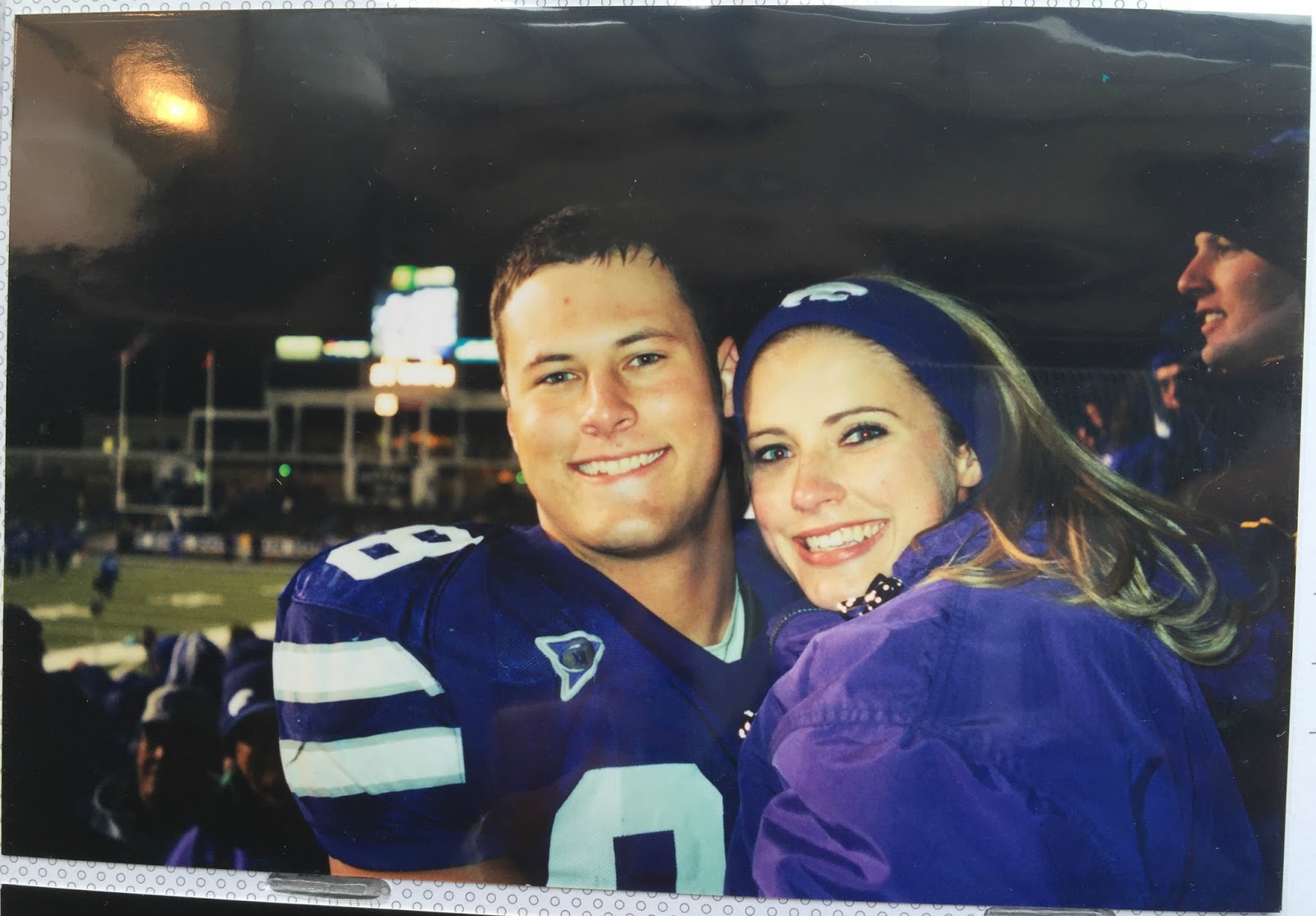 Then on May 3, he came down to Dallas to see me and took me to my favorite fancy restaurant for dinner. 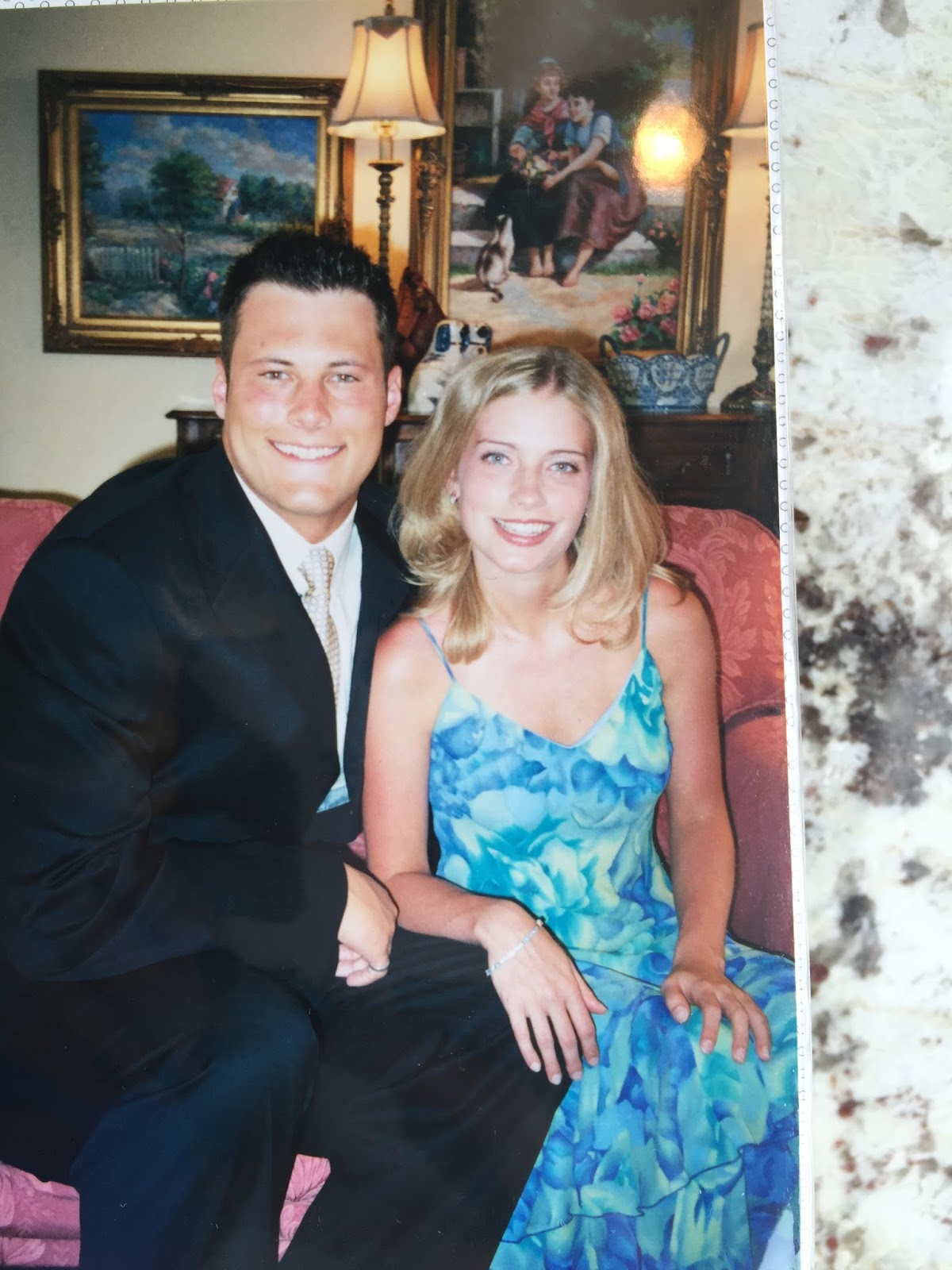 My mom took this pic right before we left for dinner.

We had a lovely time and a yummy meal…and then when we were about ready to go, he realized he didn’t have his wallet in his jacket pocket (unbeknownst to me, he had an engagement ring in his pocket and had been so nervous he would forget that, that he forgot his wallet).  So, I paid for what would end up being our engagement dinner and tucked the receipt into my wallet (which is still there to this day) and we headed out. 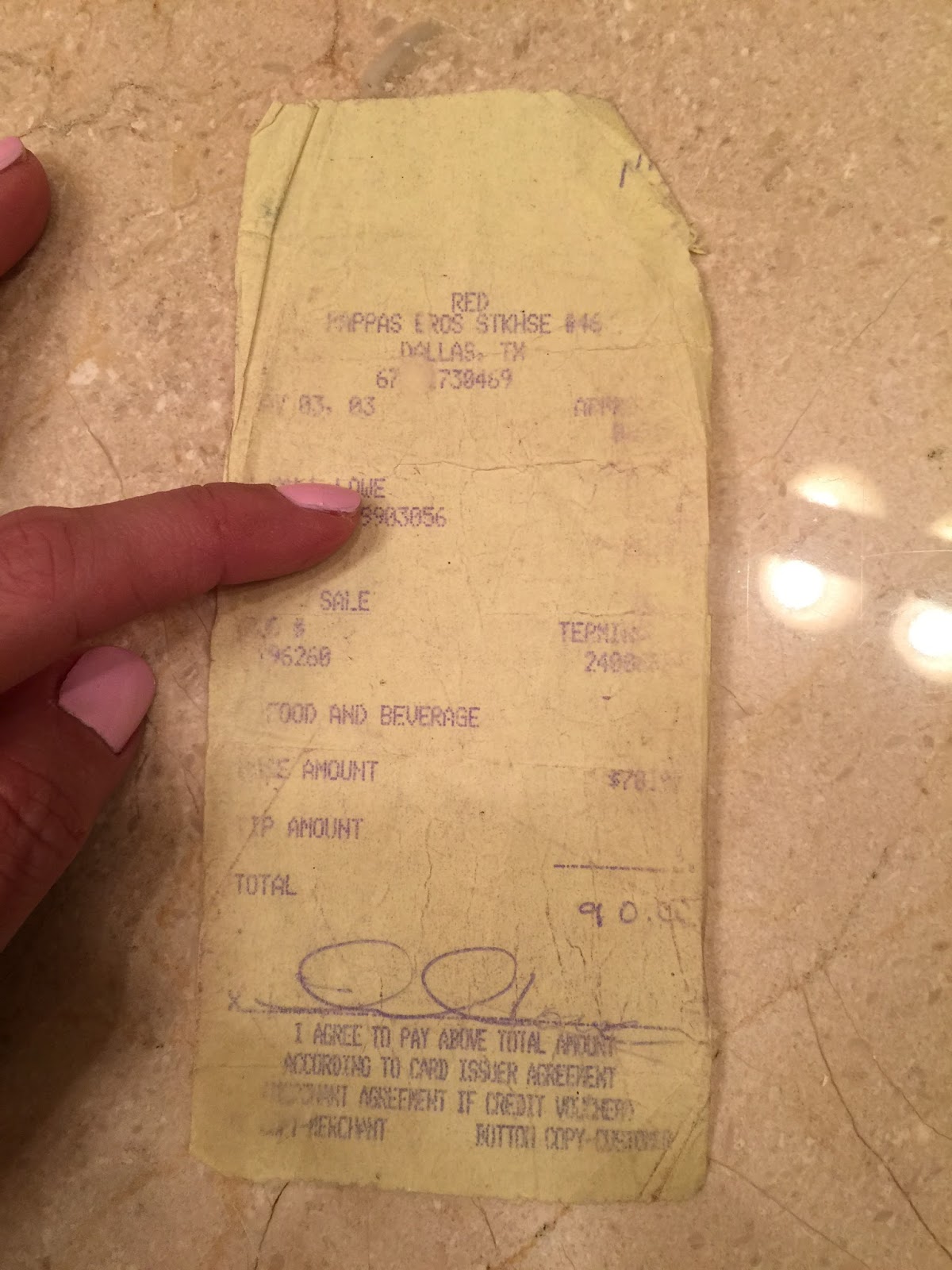 I can’t seem to part with this receipt, so it stays in my wallet all the time.

Andrew asked me if the Mustangs were cool and I said yes, so we drove there.  (It’s this famous little area in my hometown with pretty water features and huge mustang sculptures running through them.)  We parked and walked around the mustangs and that’s when he stopped, got down on one knee and asked me to marry him.  Less than one year after meeting that hairy farm boy in my parents’ kitchen, I was telling him I would be his wife.

And on March 13 of the next year, we were married… 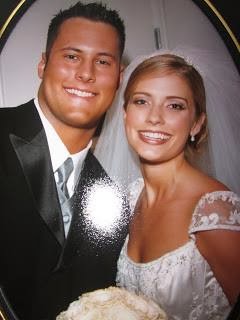 And almost exactly 11 years later…he’s still my favorite person in the world.
Last year on our 10 year anniversary, I did my post on marriage.  You can read it here.

For grins, here are some early pictures of us… 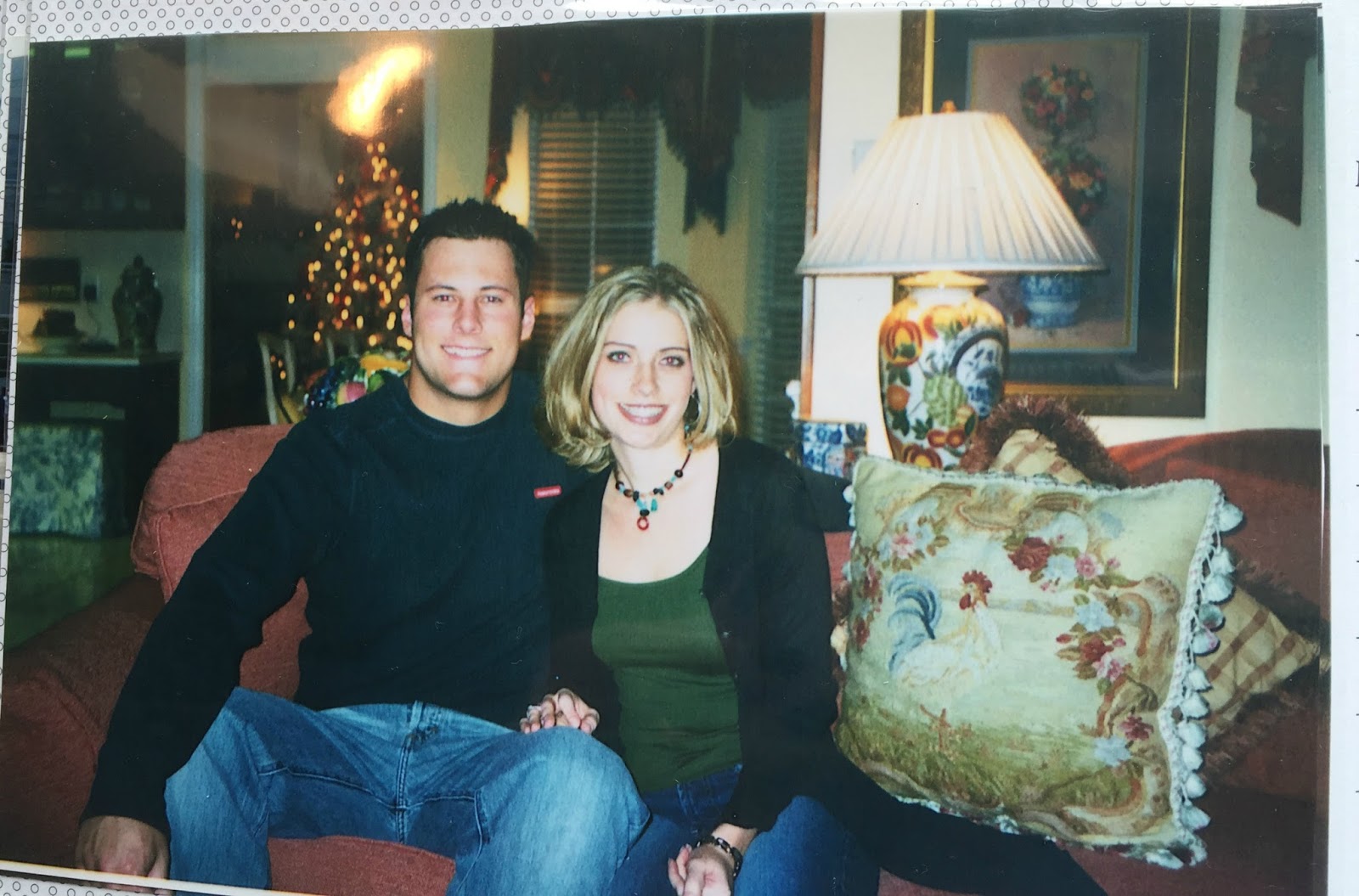 Here we are dating… 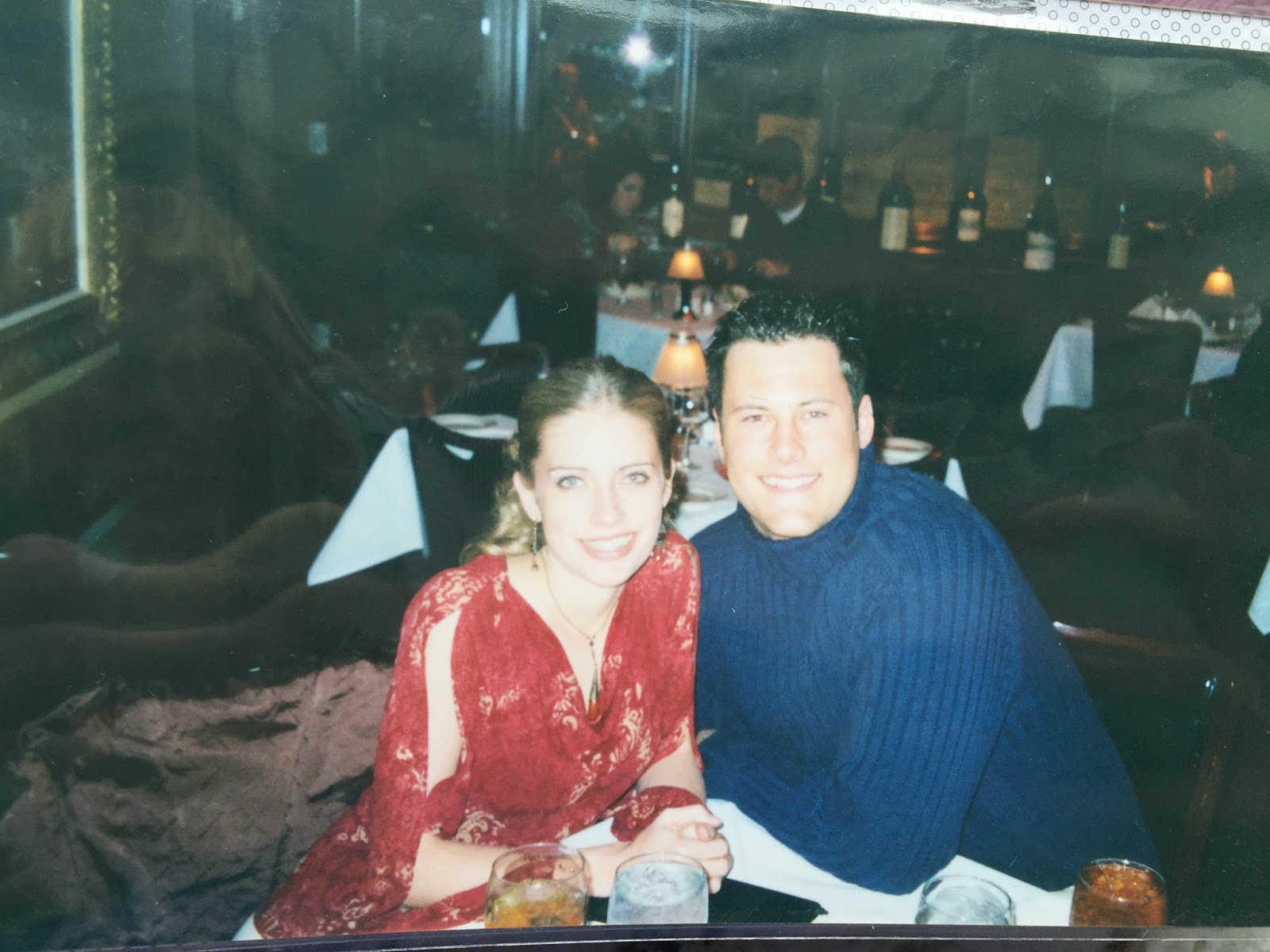 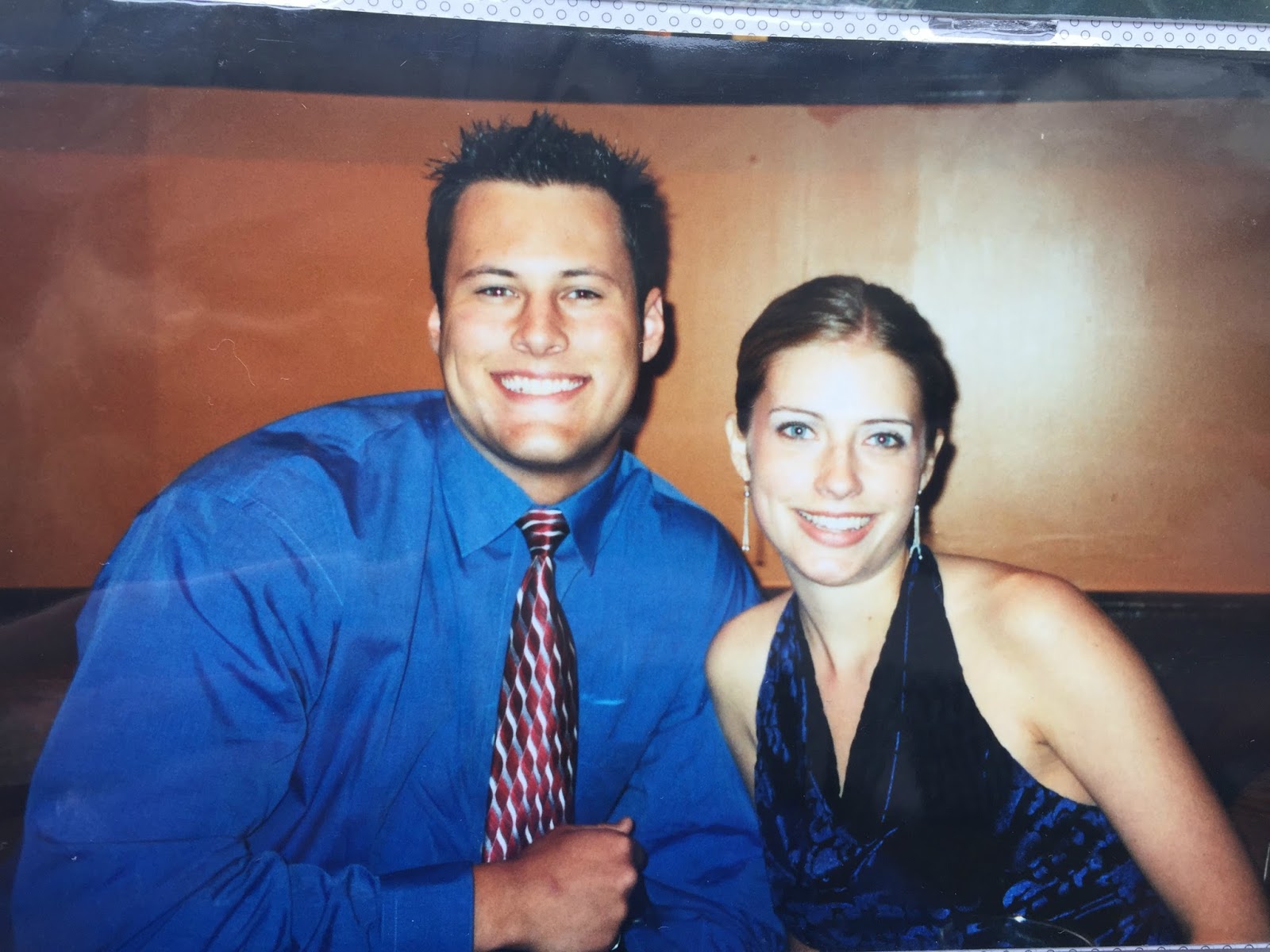 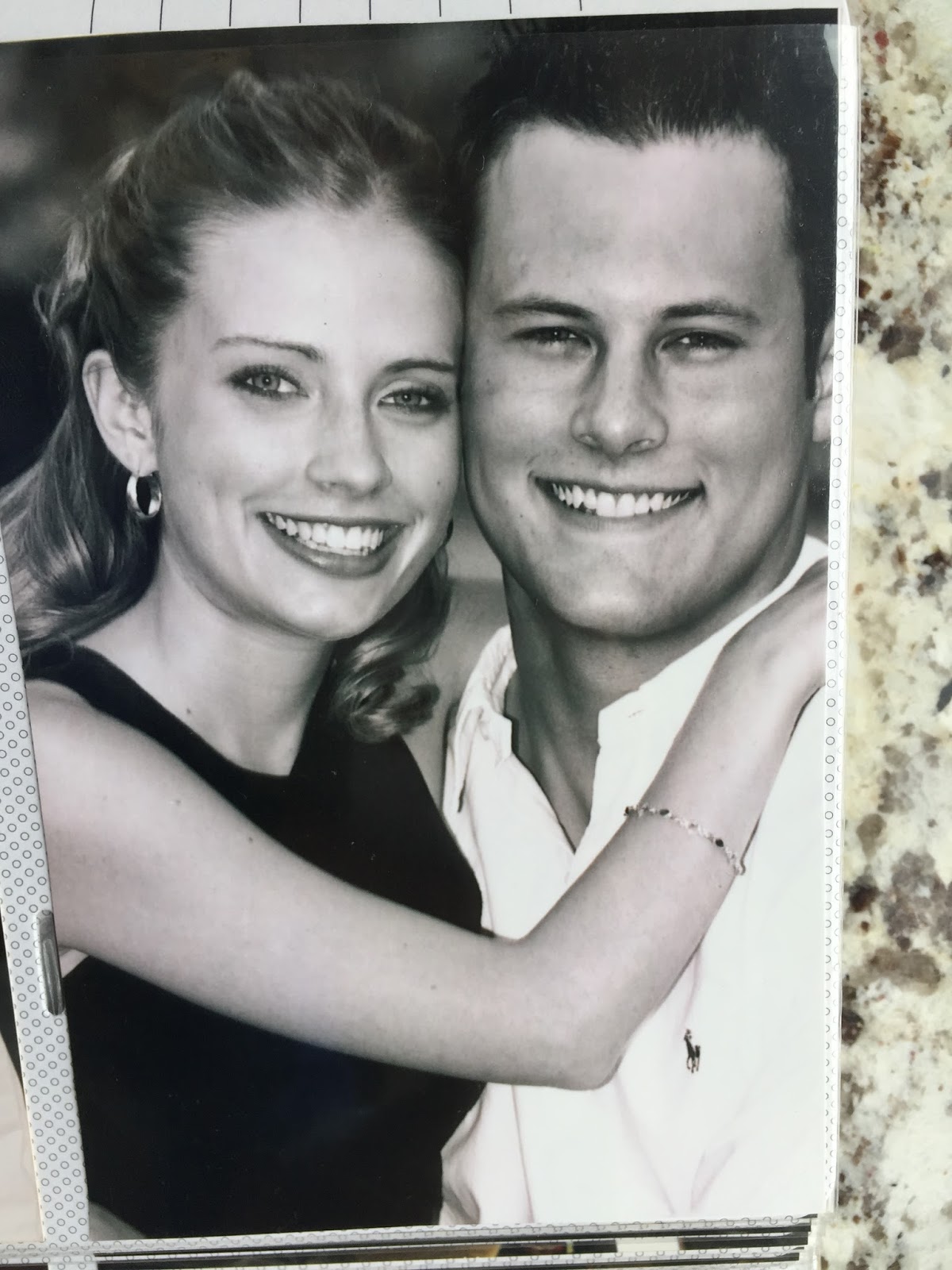 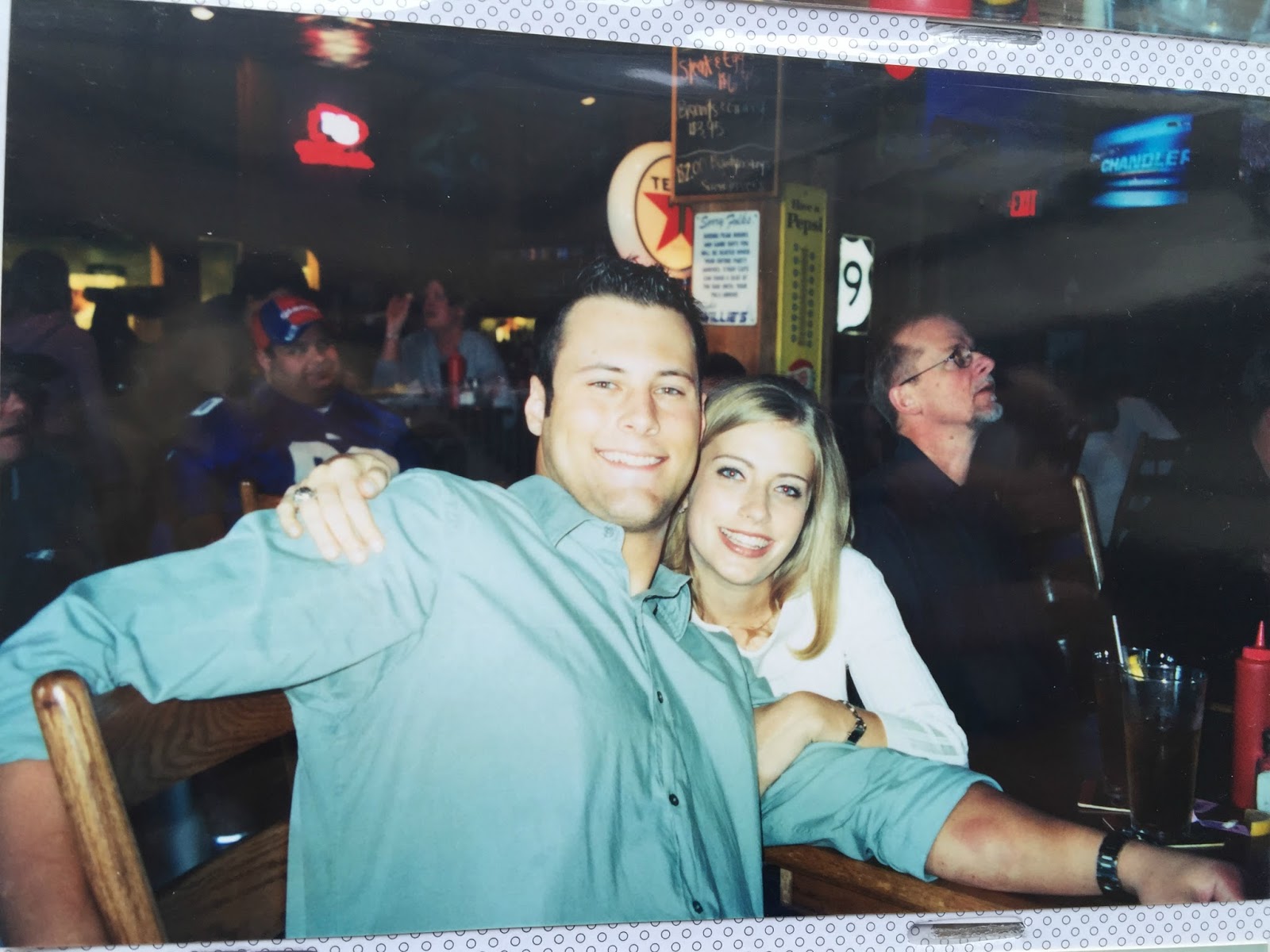 …this was right before we  got married… 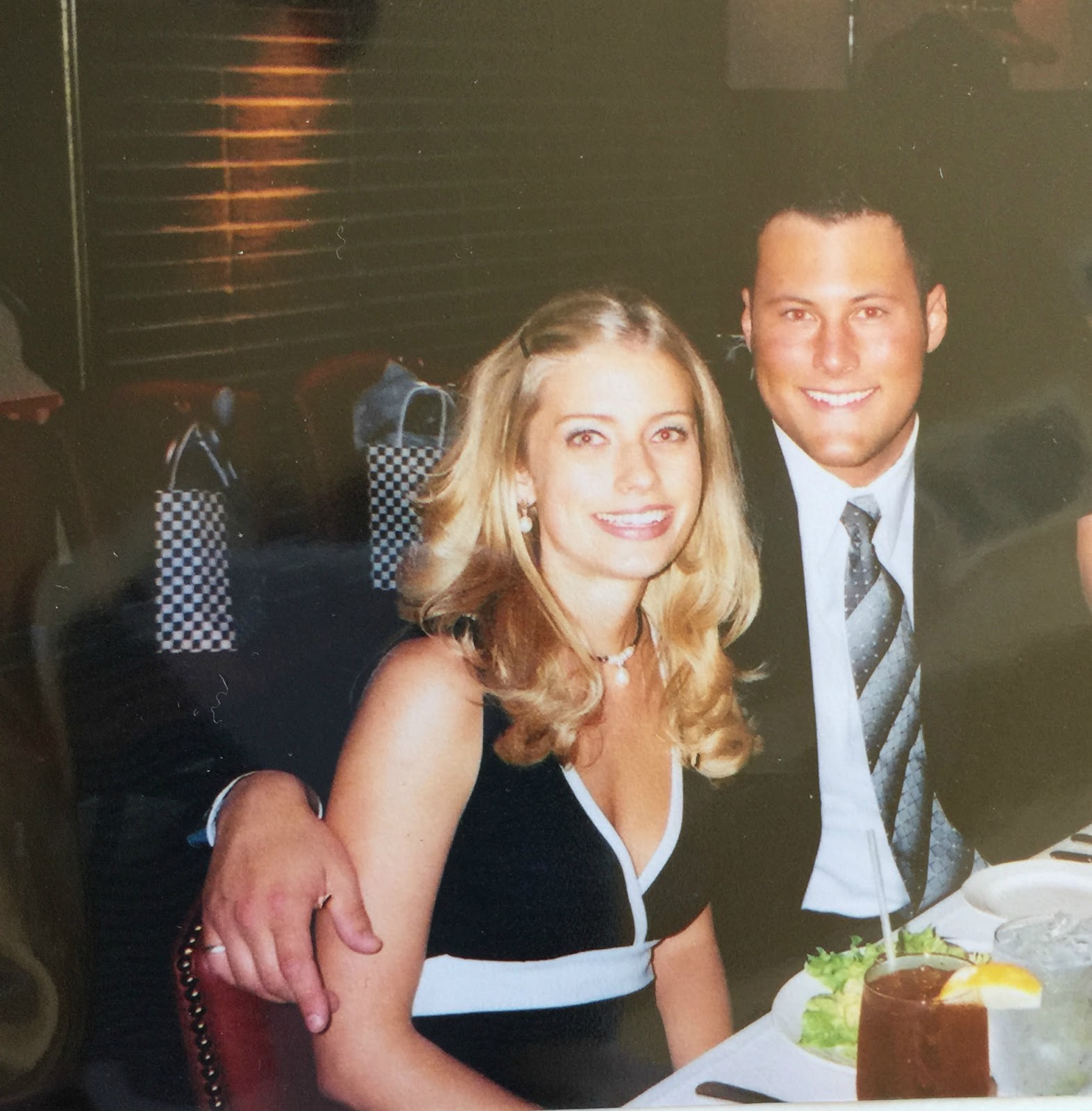 …and this is our rehearsal dinner… 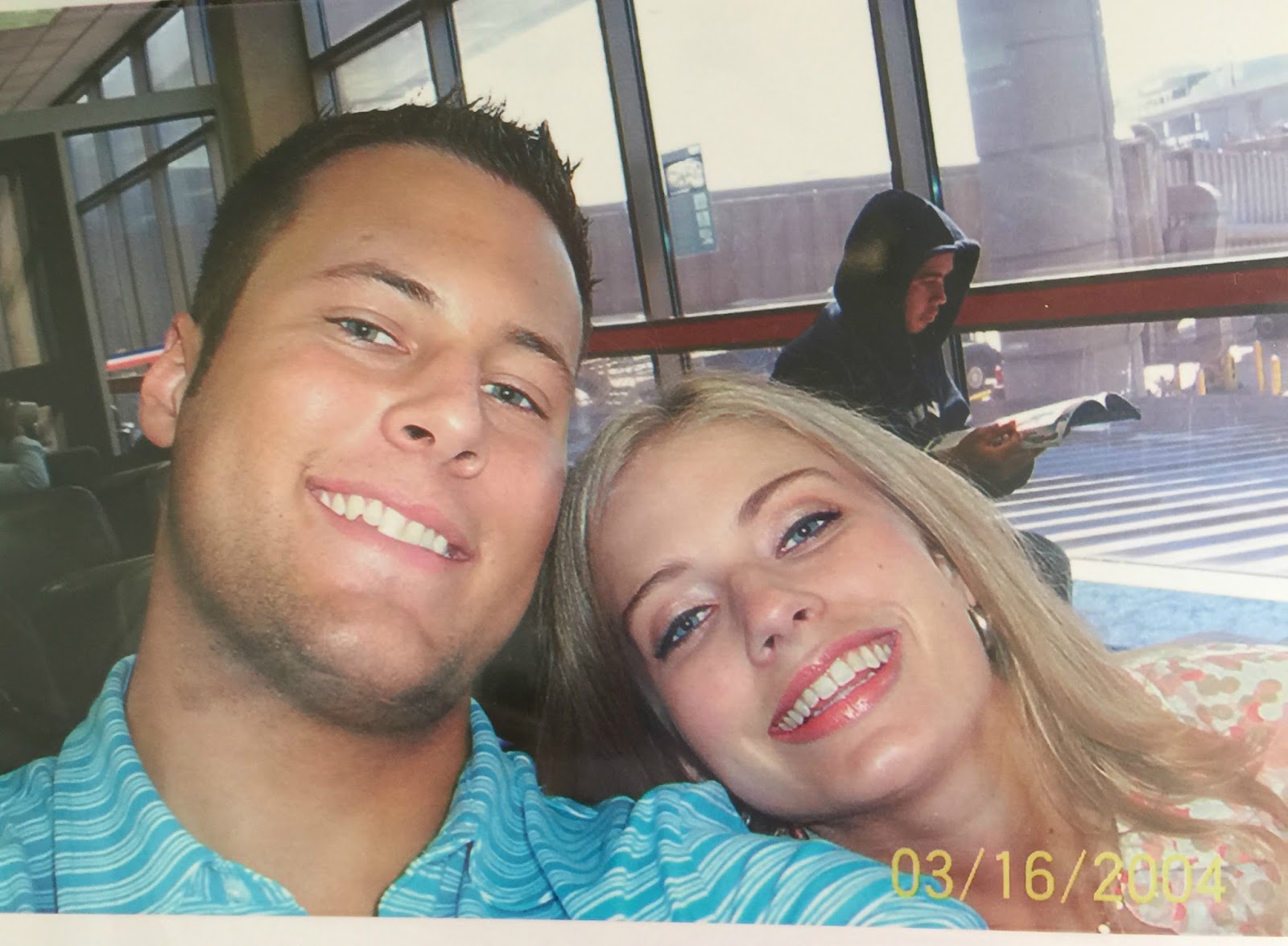 …we’re at the airport about to head to Maui for our honeymoon. 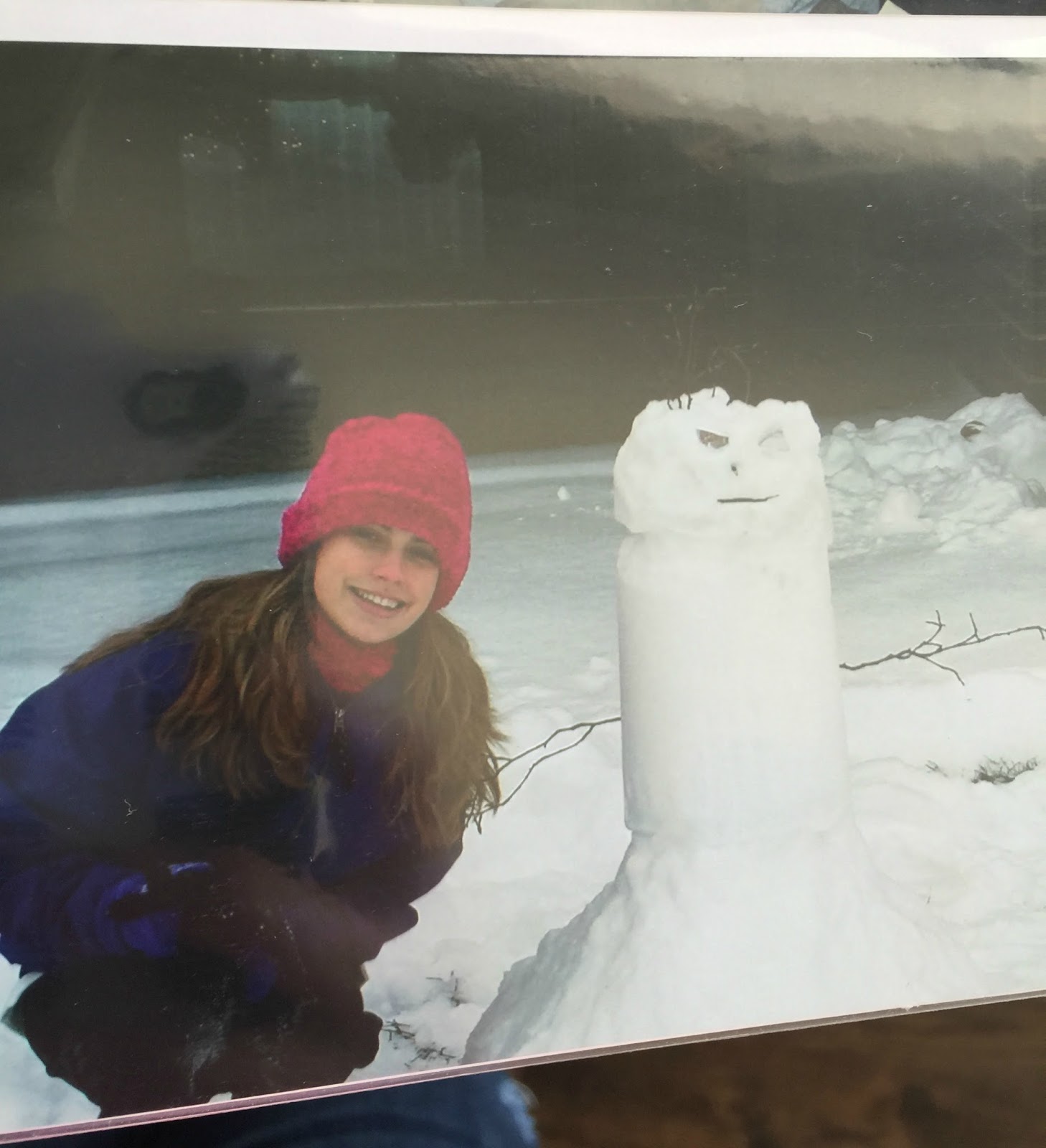 We were married in March and then in April, we moved to Detroit.  It snows a lot there… 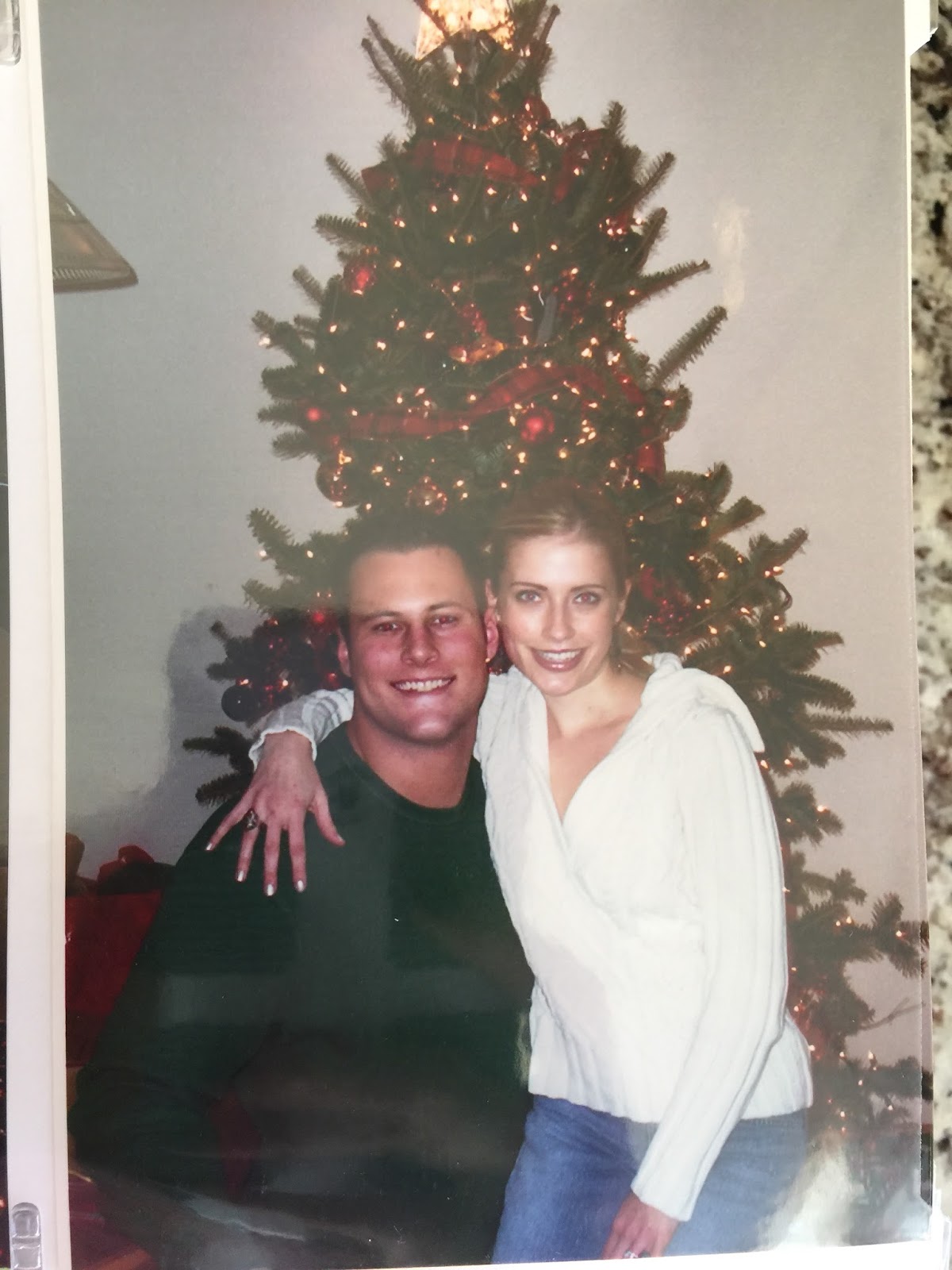 Our first Christmas as husband and wife.  This is in our apartment in Detroit. 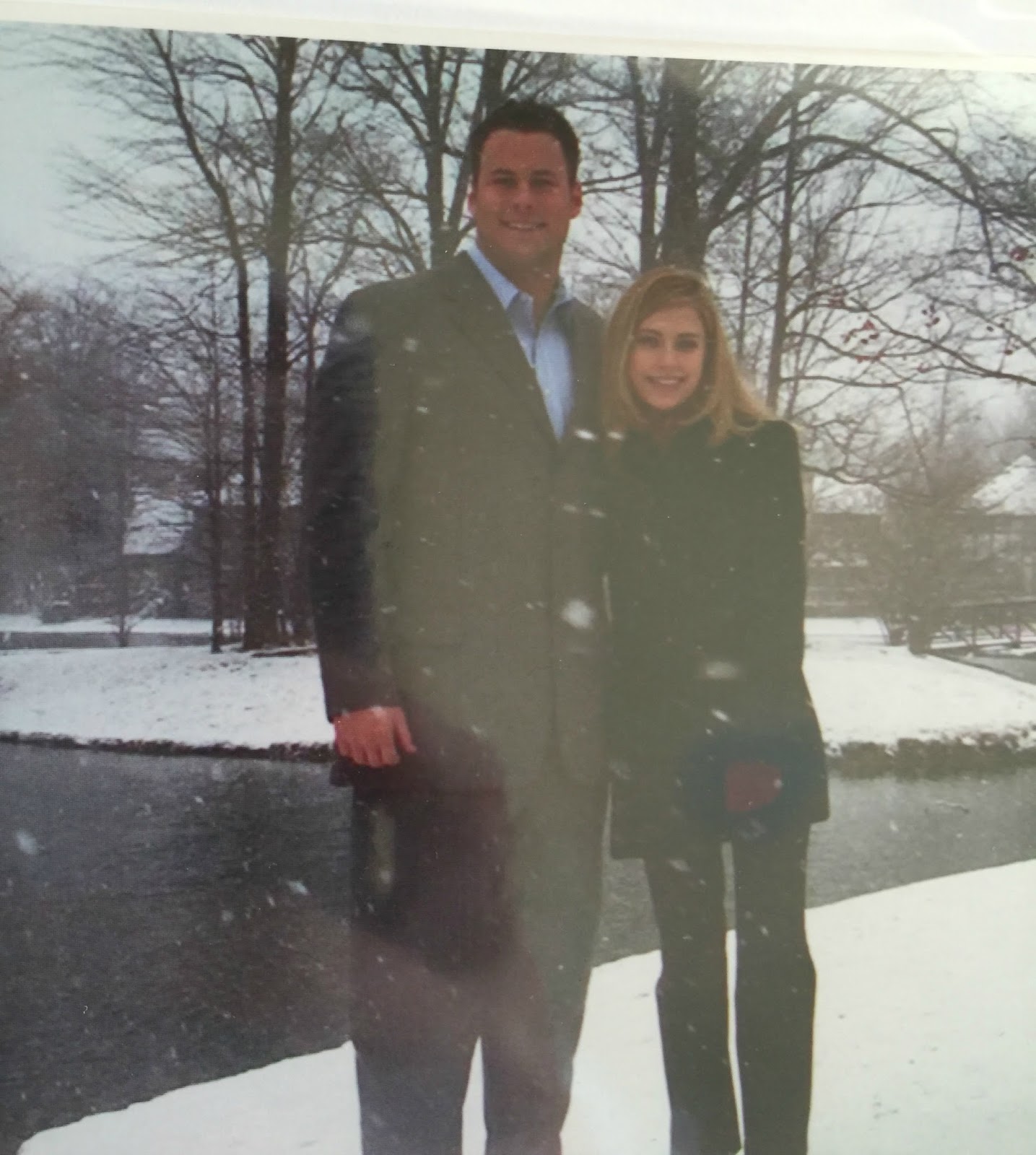 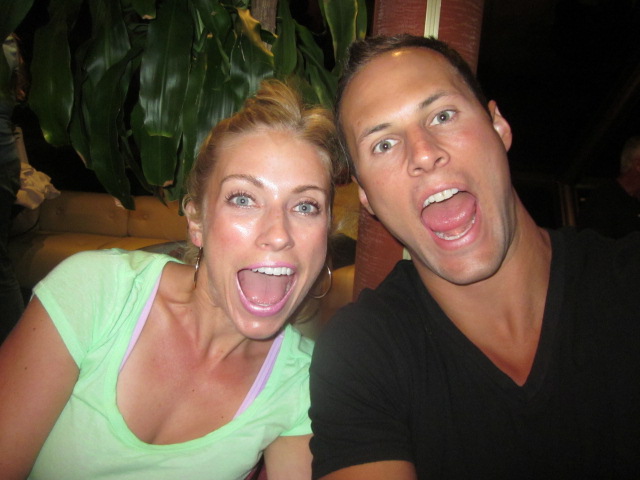 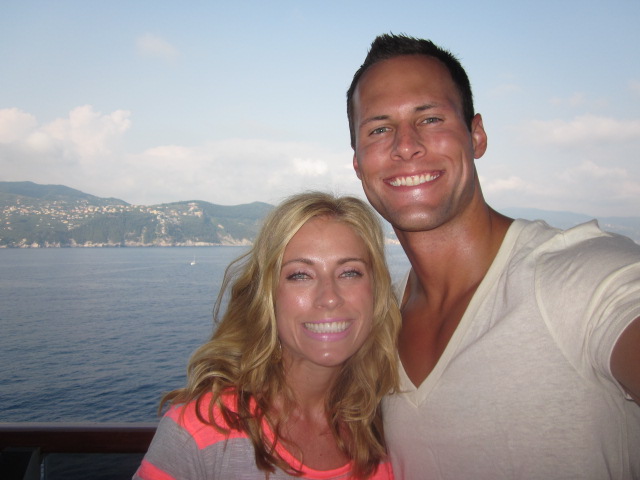 Next time on Show & Tell Tuesday… 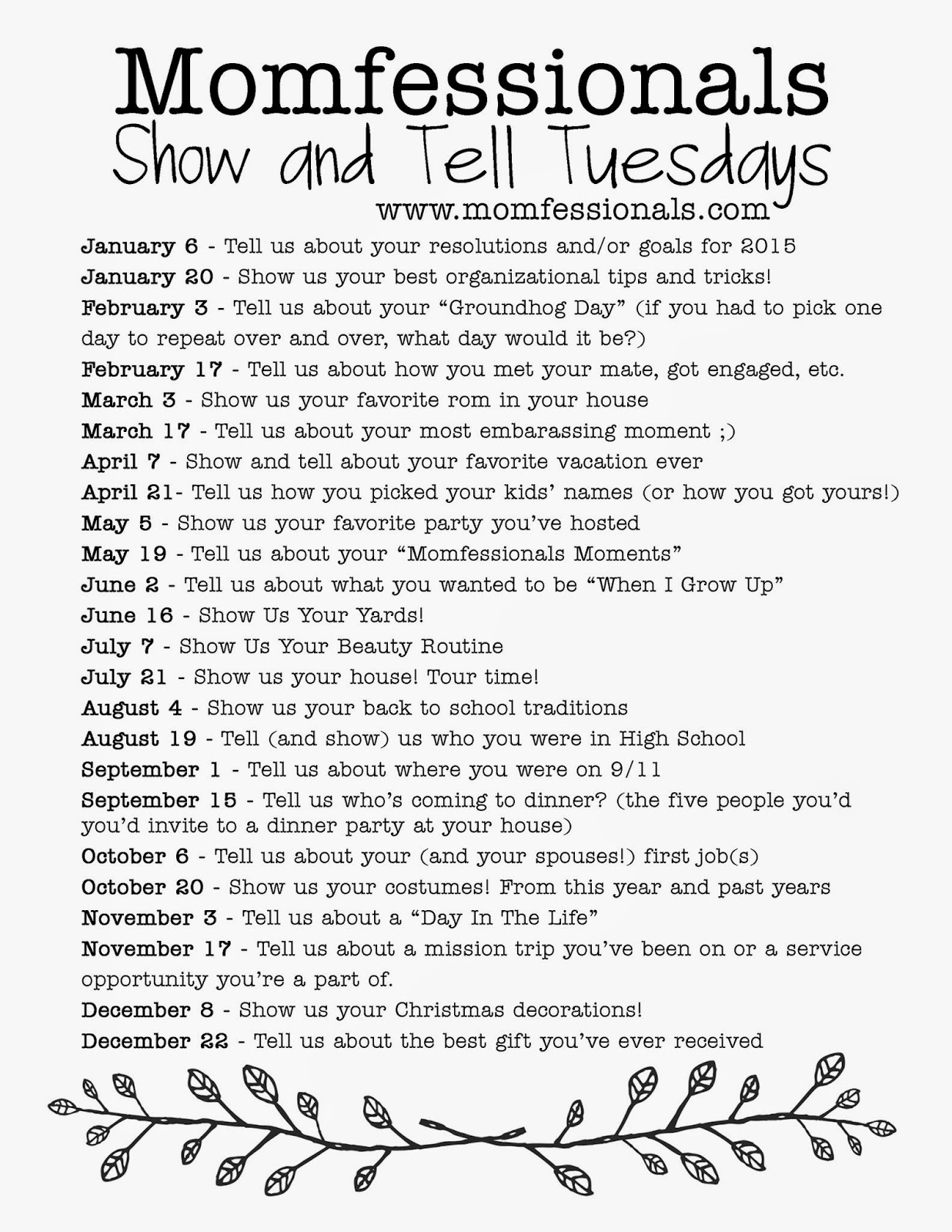 …it’s showing you my favorite room in my house.

Don’t forget to check out my foodie blog today… 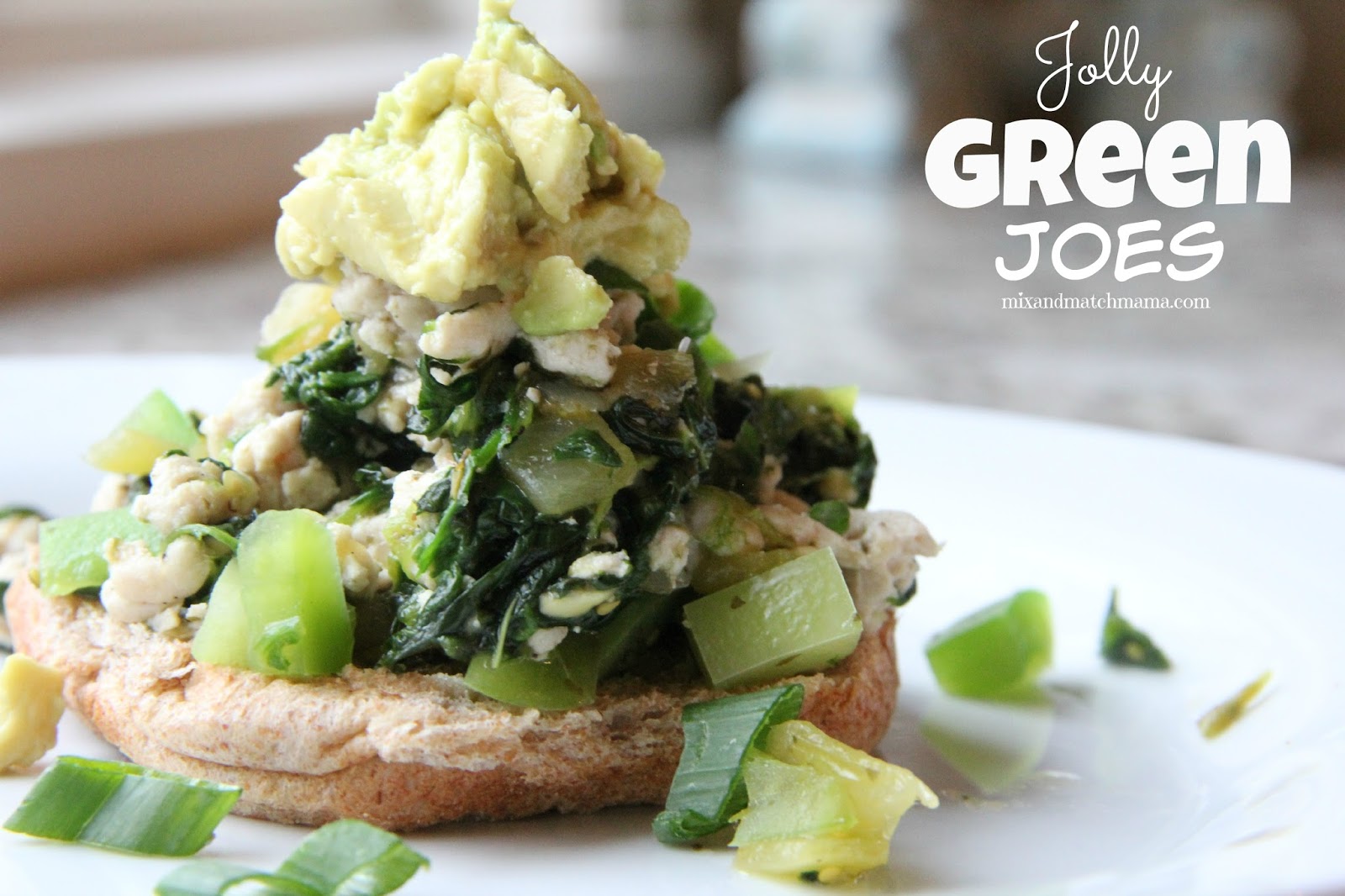