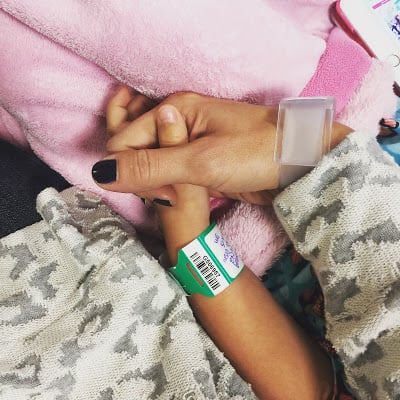 Oh my goodness.  Words cannot even express how grateful we feel for your prayers.  We have felt them this week.
On Tuesday, our sweet Ashby had surgery.  Tests and scans revealed that Ashby had an aneurysm in her chest right next to her right lung.  Her doctors were so sweet and kind when they told us this, but were very serious and matter of fact that we needed to get that thing out as soon as possible.
They also recommended that when one surgeon was up at her chest getting the aneurysm out, another surgeon needed to be down at her hand removing a huge clump of veins that was also cause for concern.  Two surgeries, one day, one precious little girl.
So, that’s what happened on Tuesday.
Ashby was born with Klippel-Trenaunay syndrome which is a vascular birth defect that causes too many veins to grow in a limb…in her case it’s her upper trunk and right arm.  Where we have one vein, Ashby might have a cluster of 30.  These veins don’t run straight like ours do, they twist and turn into giant knots which makes her blood slow down, get stagnate and throw blood clots.  Typical preventative stuff that you and I might do if we were susceptible to blood clots don’t work for her because she’s clotting due to the cluster of veins…so something like a blood thinner isn’t really effective on patients like this.  It’s all very complicated.
So, she had this surgery to remove the aneurysm and debulk the veins in her right hand (which involves re-routing veins and connecting feeder veins) and it went better than anyone ever imagined :).
I always feel like when God blesses you, you owe him the gratitude of thanksgiving and praise.  Here are specific things we prayed about and the praises that follow…
1. They were very concerned that Ashby would need a blood transfusion during surgery (because it was vascular and they were cutting and rerouting veins), and she did not.
2. They were quite certain that Ashby would have to stay in the hospital following the surgery…and friends, they ended up discharging us that day because she was doing so well!
3. They told us to expect to come home with 5 to 7 drains in…she came home with zero drains.
4. They called us from the OR right after surgery began (at 8:30 am) and told us to expect it to wrap up right at noon…they finished at 10:30.
5. They gave us enough pain medication to last her five days…she stopped taking it after the day of surgery.

6. They said she needed to sleep with her arm elevated for the first three nights…she hasn’t woken up one time during the night or cried about the fact that she has to keep her arm elevated. 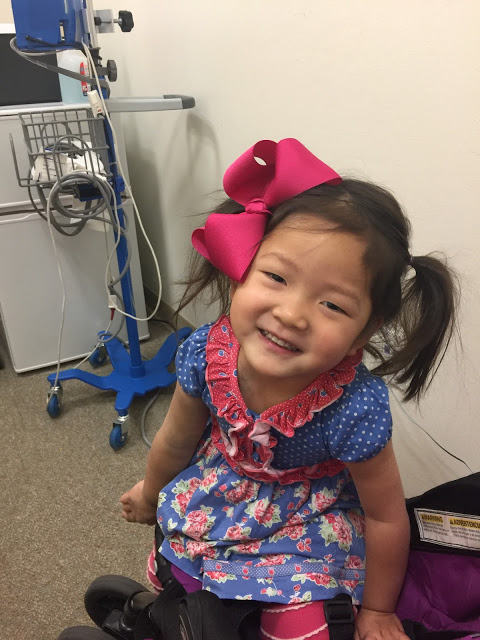 The day before, we spent at the hospital doing pre-op stuff.  Look at my girl!  She’s so sweet :). 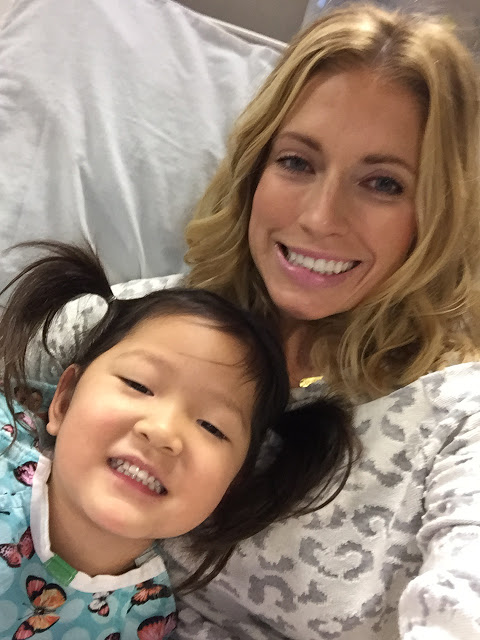 We arrived at the hospital at 6:00 AM, changed Ashby into her gown and hung out in her room until it was time to go down to the OR. 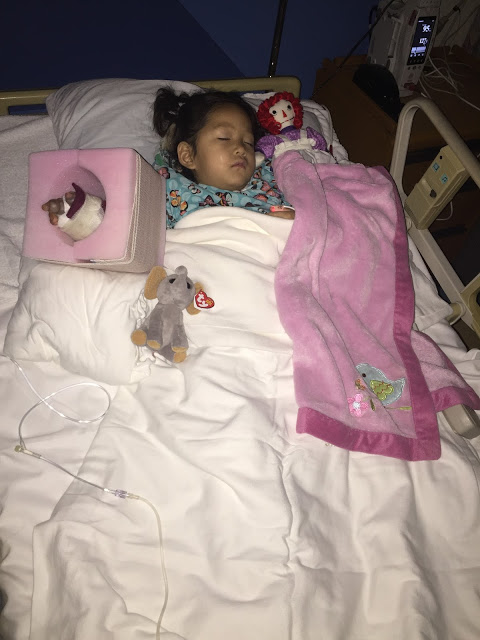 Post-op, she’s back in her room sleeping.  Can you tell this girl is loved?
And then around 1:00, she woke up and requested an orange popsicle…such a Smith thing to do :)…. 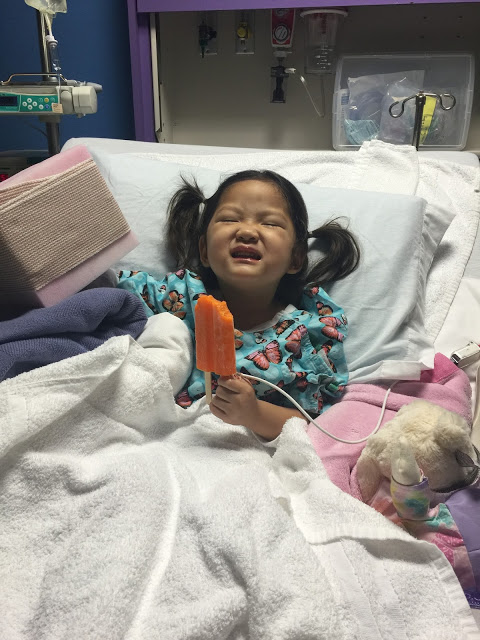 Nothin’ is going to get this girl down! 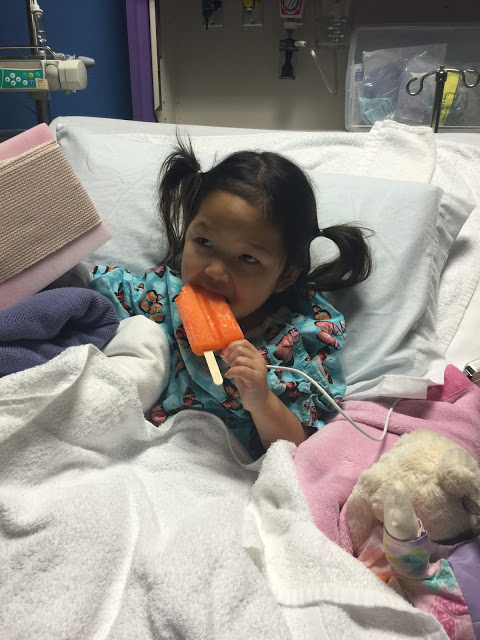 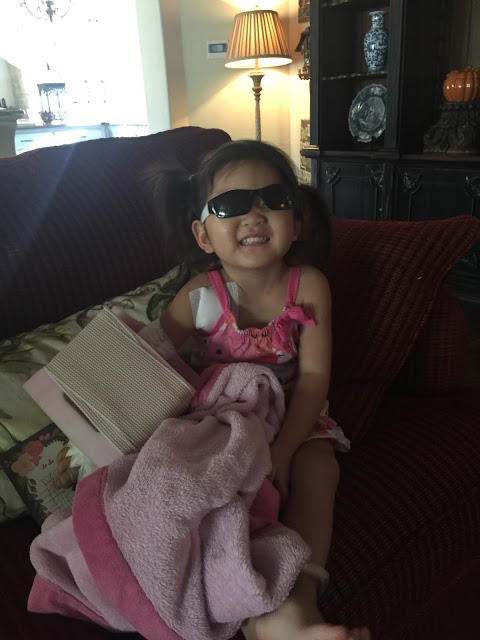 And then this is Ashby at 5:00 PM the day of her surgery.  Look at her!  Out of the hospital, no drains, wearing her big brother’s glasses and grinning at the camera.  Praise the Lord.
So, needless to say, she’s recovering really well.  Everyone keeps saying this is going “better than expected” which is EXACTLY what my mama heart wants to hear!  Her surgeon put a cast on her hand and arm to protect the incision and she’ll wear it for three weeks.  Her armpit/upper chest area is protected with just a dressing.
Personally, we would like to thank our precious friends and family who looked out for us this week.  Our friend Dawn arrived at our house at 5:15 on Tuesday morning to stay with my big kids and then take them to school.  And then Erika picked the big kiddos up after school and let them play with her kids until we were ready for them to come home.
My parents were out of the country and Andrew’s mom has been in the hospital fighting a very bad infection (prayers for her please), so we were grandparentless on surgery day…but no worries because Uncle Sean, Aunt Catherine and my Grandmother spent the day up there with us.  Even our sweet preschool minister came to check on us!  And I can’t even begin to count the text messages and phone calls from my friends and other family.  Often, you see God’s love the most through other people’s actions and kind words.
So, that’s your Ashby update!  She is doing great!  She is doing amazing!  I hate to say this…but it’s so true, Ashby is a fighter by nature and by necessity.  I can only assume that living 2.5 years in a crowded orphanage teaches you a thing or two about being tough.
One last thing…you guys all know that I almost always dress Ashby (and Kensington) in Matilda Jane Clothing.  Well, right now, Andrea is donating 25% of your purchase today through Monday to Scottish Rite Children’s Hospital which is where Ashby receives her treatments.  Friends, I cannot say enough about this hospital.  Over the summer, we briefly had to deal with another children’s hospital as well as Scottish Rite and the difference in staff, facilities, care was night and day for us.  If it were appropriate, I would have kissed each and every nurse, doctor and aid that took care of us this week on the mouth :).  They are simply amazing. 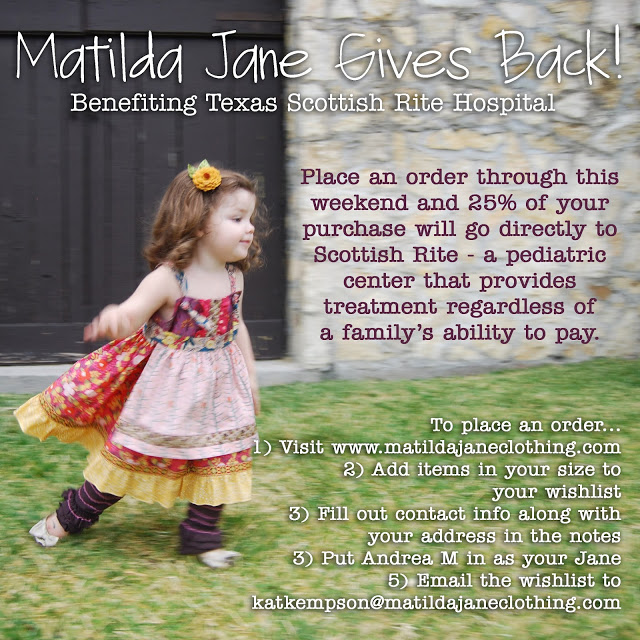 Thank you again so much for your prayers this week!  God is good.  Adoption is amazing.  And Ashby is such a blessing.
Happy Friday! 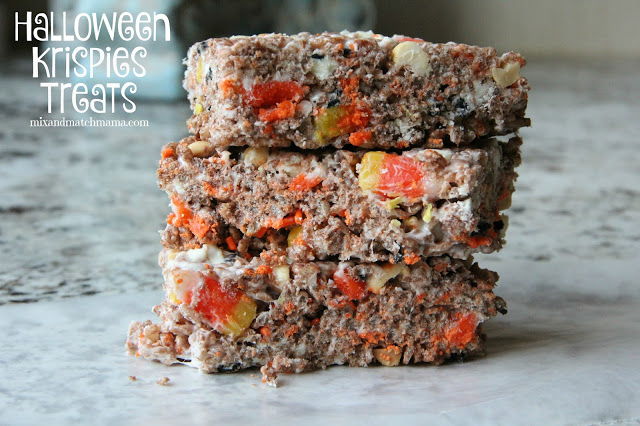 Halloween Krispies Treats up on my foodie blog :).