Twice a month, we all link up with Andrea and show & tell ya something.  Well, today, I’m linking up early because next week, I’m not blogging while we’re on vacation, but I wanted to make sure I got to participate.  Today, we’re sharing about our hometown.  In my opinion, I have three hometowns :).
Irving, TX

So, I was born and raised in Irving, TX.  Irving is right next door to Dallas.  Their city limits bump right up next to each other, so it’s a pretty urban city that doesn’t have a real cozy/homey feel to it.  That being said, it was home to me for the first 18 years of my life.  My dad had his own business there for almost 40 years, we attended church there, all of my friends lived there and I graduated from Irving High School.  Irving is where I’m from.  Irving is famous for several things… 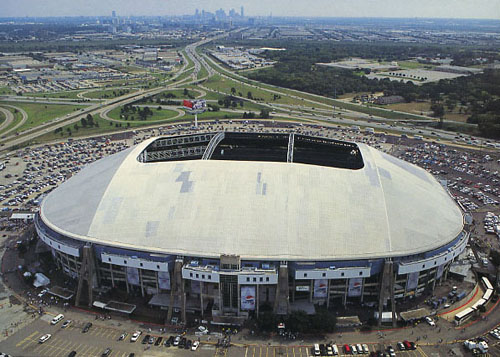 Up until a few years ago when Jerry Jones built his new stadium, Irving was home to the Dallas Cowboys.  This was Texas Stadium (the city tore it down after the Cowboys left).  Even after they moved their stadium, the Cowboys still continued to practice in Irving.  Next year, their new practice facilities open up in Frisco, TX, but up until then, Irving has claimed the Cowboys as their own. 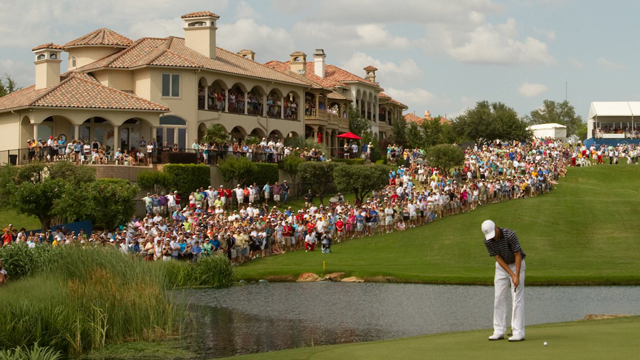 Every year, the Byron Nelson Golf Tournament takes place in Irving.  Random fact, Dr. Phil McGraw is from Irving and the neighborhood that backs up to the Byron Nelson is where they lived until they made it big and moved to Hollywood (back when I was in middle school). 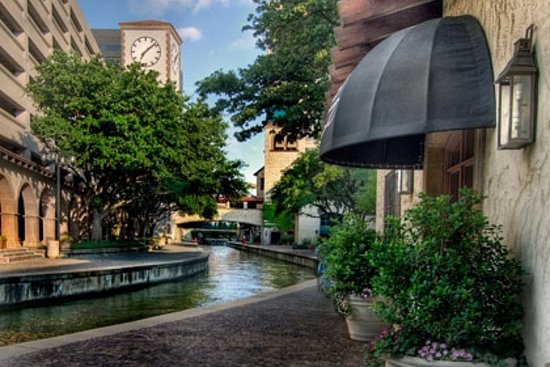 Irving has a beautiful section filled with canals that, when I was younger, was full of cute little restaurants, cafes and shops.  Strangely enough…everyone abandoned this area some time ago and the nationally syndicated Kidd Kraddick in the Morning Radio Show took over this little section of Irving and this is where they produce their show each day.  Isn’t that funny?  Their show is on an abandoned canal in the heart of Irving. 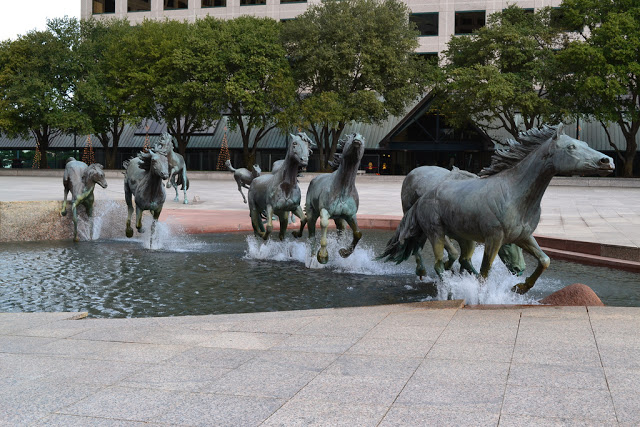 The Mustangs, as this group of horses is referred to, is perhaps the most famous little part of Irving.  Thirteen years ago, a 22 year old boy brought his girlfriend here after dinner one May evening and proposed…and now, she types this blog post for you :).
So, that’s Irving.  That’s really and truly where I’m from.  At 18, I graduated high school and moved to Denton, TX for college just as my parents were moving to the Colleyville/Southlake part of our metroplex.  And that leads me to my hometown #2…
Southlake, TX
So, my parents moved to this quiet little suburban neighborhood nestled between Colleyville, Southlake and Grapevine, TX.  It’s weird…part of their neighborhood is in Colleyville, part is in Southlake and their school district zone is Grapevine.  So, it’s just this little cluster of cute towns all mushed next to each other west of DFW Airport.  I lived in Denton, TX for a year attending college…but when my parents moved to their new house…and my boyfriend at the time got a job in Southlake…it didn’t take long for me to decide to move home and commute to college…so, I lived in their new house for 2½ years before I married Andrew (somewhere in the middle of all of that, I broke up with other boyfriend and met this cute football buddy of Sean’s and fell in love).  If you’ve read this blog for any length of time, then you know how much I love the little city of Southlake, TX.  My parents have now lived here 15 years, and because I never have a reason to go back to Irving, Southlake feels like home to me. 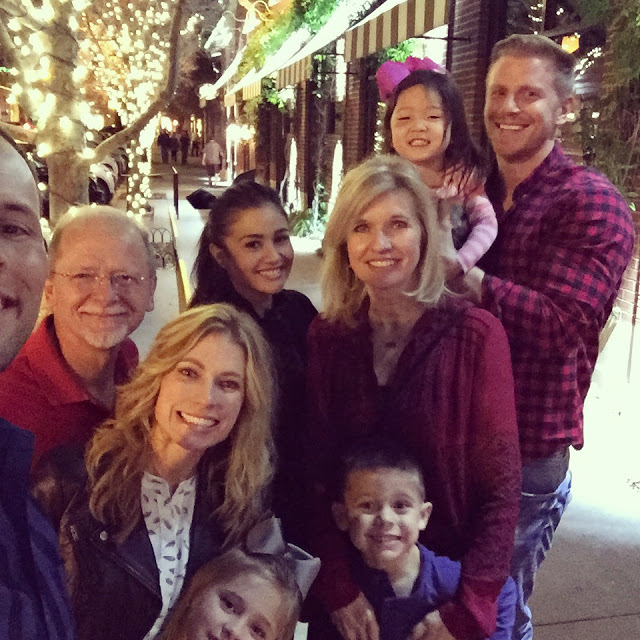 The heart of Southlake is their Town Center.  This outdoor shopping/dining/entertaining complex is unbelievable.  When we first moved there, it was only two rows of shops with two restaurants and now, it’s HUGE.  Every store you could want is within walking distance, there is a movie theater, a hotel and dozens of restaurants. 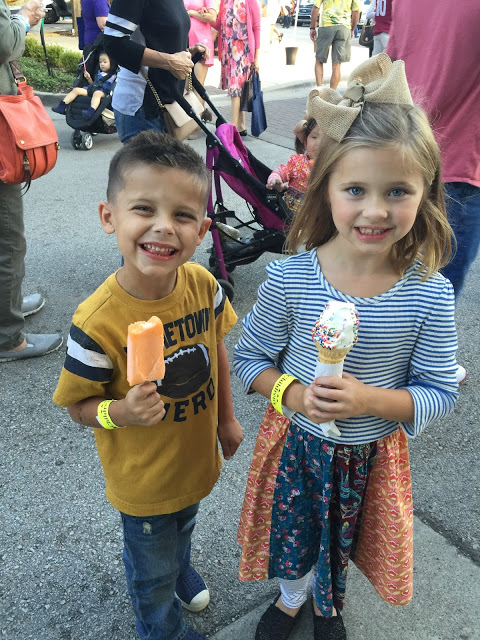 Southlake is where you’ll find us for Oktoberfest, their tree lighting ceremony, their art festival and pretty much on every pretty Saturday in between.  My kids call this place “Lovie’s town” and if we’re not at “our town” on a Saturday, we’re at Lovie’s :). 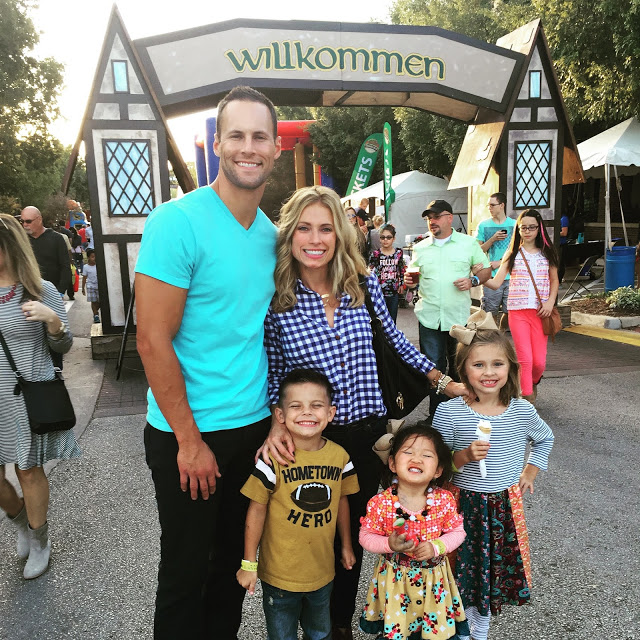 The city planners that created this little part of Southlake should be praised.  It’s spectacular!  And it’s home.
McKinney, TX
So, I’ve told this story before but it bears repeating today…back when I was in middle school and high school, we would drive from Irving to McKinney for lunch and to shop on their historic town square.  Back in the day, that was about an hour commute (a new toll road has opened since then, so it’s more like 35ish minutes from Irving today).  So, we would go and eat at the famous Pantry on the square and shop.  It was always a treat!  That being said, I knew nothing else about McKinney besides that square and that restaurant.  Well, fast forward to Andrew and me deciding to open our own business and Andrew suggested McKinney.  Stupid Andrew.  I was not going to live in McKinney.  That was so far away!  As an Irving girl, anything north of Dallas was basically Oklahoma and I was not moving there.
Well, I did.
Ten years ago, we moved to McKinney to plant our business and start a family and it was one of the VERY BEST DECISIONS OF OUR MARRIAGE.  I hate it when Andrew is right. #ithappensalot #donttellhimisaidthat  I cannot imagine living anywhere besides McKinney, TX.  This is the perfect place to own a business and raise a family.  This little suburb is only 25 minutes (depending on traffic) north of Dallas, but at times, feels much further away.  We have the historic side of town and the newly developed side of town…and I love both.  When I die, I hope they bury me in McKinney, TX.  This my friends, is really my home.  And as for that restaurant, The Pantry?  We’ve eaten there the last three Saturdays in a row. #noshame #somethingsnevergetold  Here’s a peek at our McKinney… 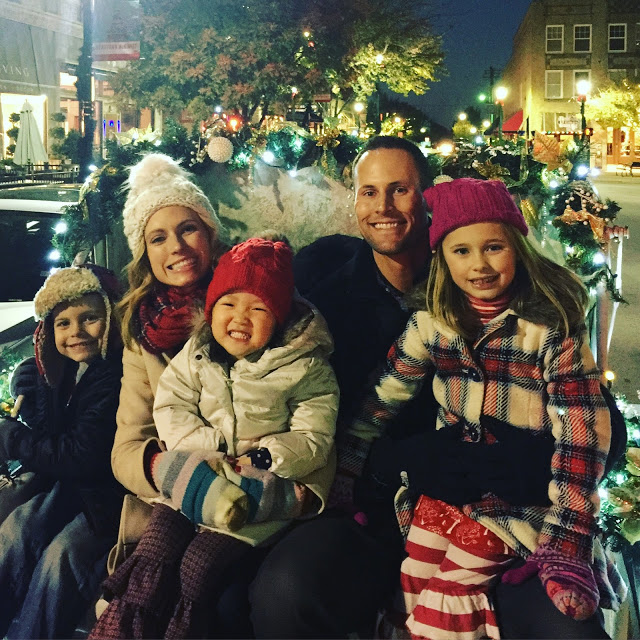 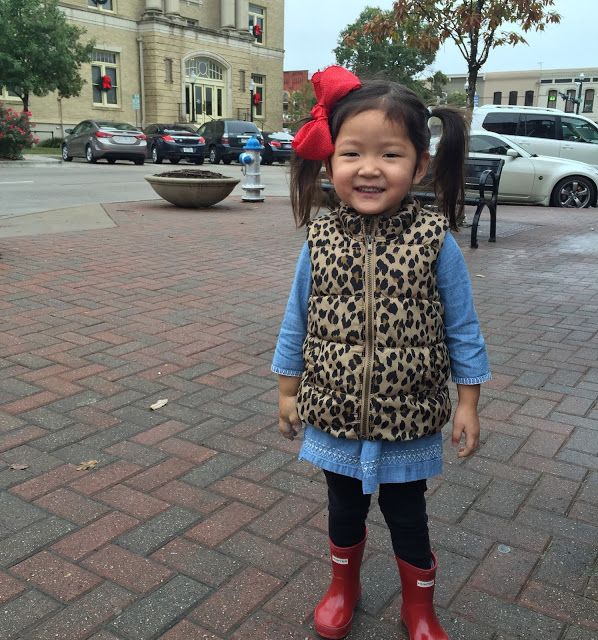 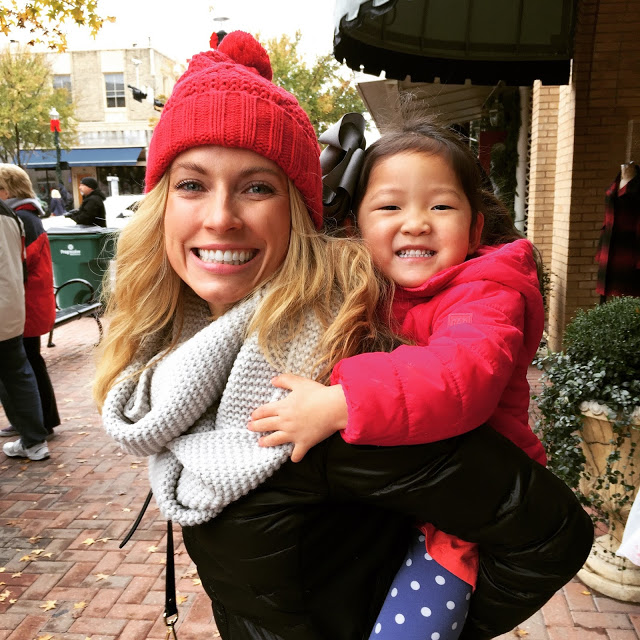 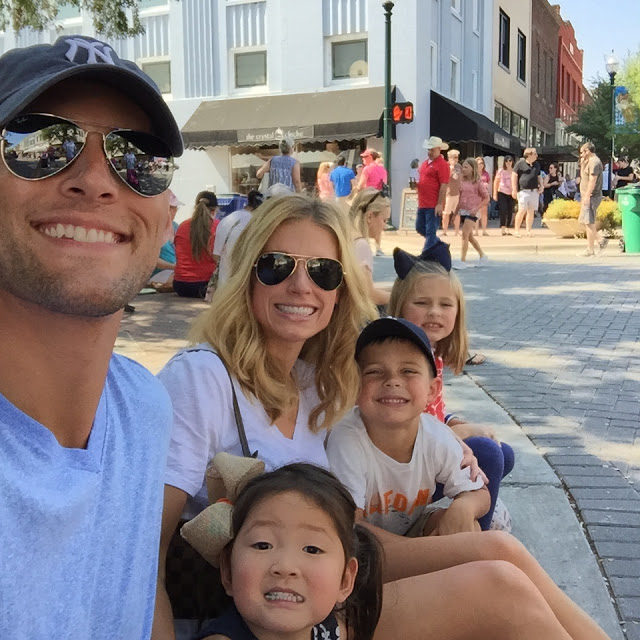 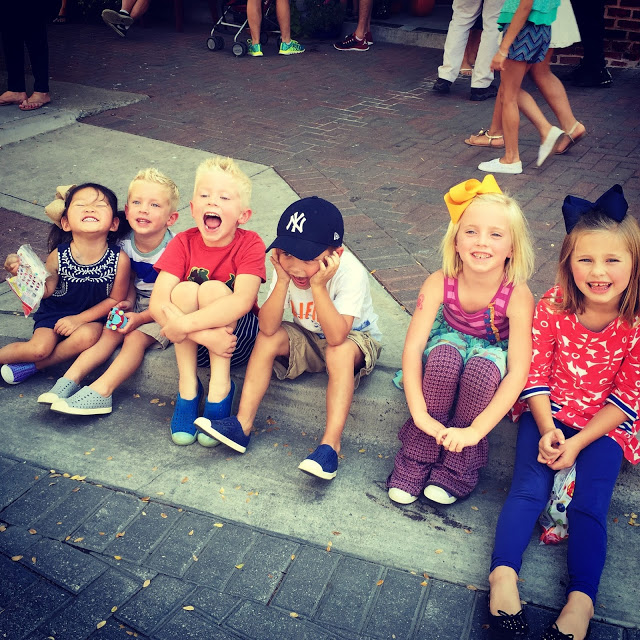 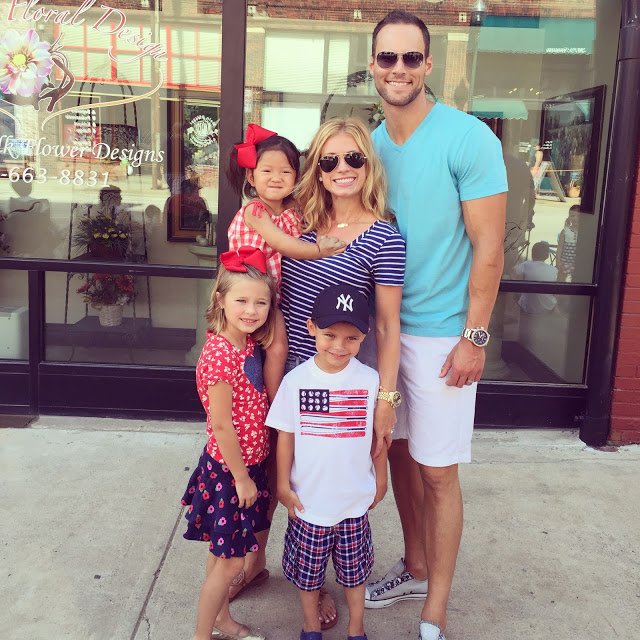 McKinney is home.  Now, I know I’ve bragged about this before…BUT…Money Magazine did name us the best city in America to live in :).  I mean…who knew Andrew was so smart way back in 2006???
So, those are my hometowns :).
If you missed my Show & Tell Tuesday posts from before…
Our Favorite Pins
The Way to My Heart
Momfessionals
Intro & Resolutions
And if you missed it in 2015, you can see those posts here.
Next time on Show & Tell Tuesday we share about our life’s mixed tape.  And to see upcoming topics, look below… 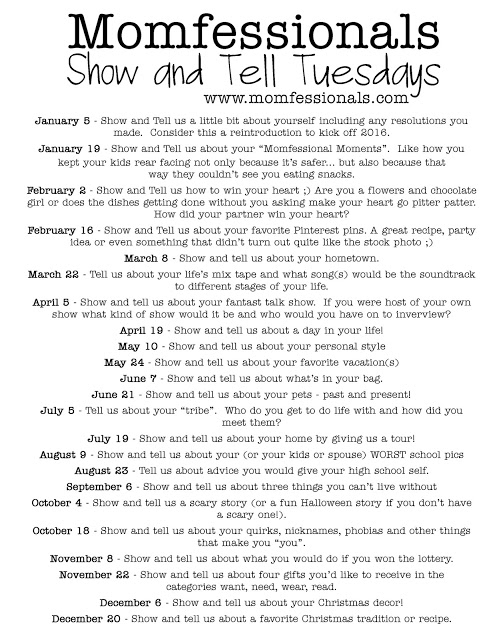 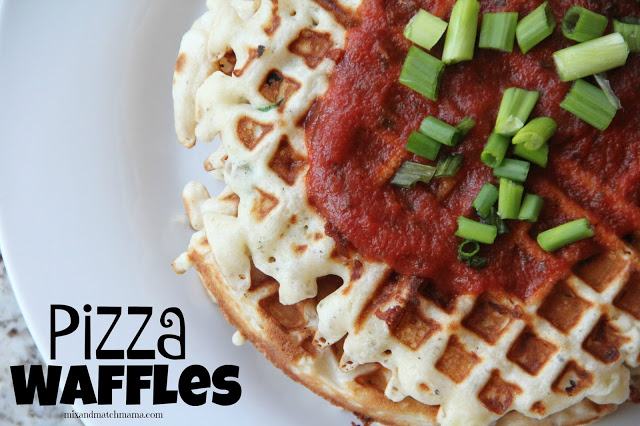