Ahhhh!  Life lately has been NUTTY. 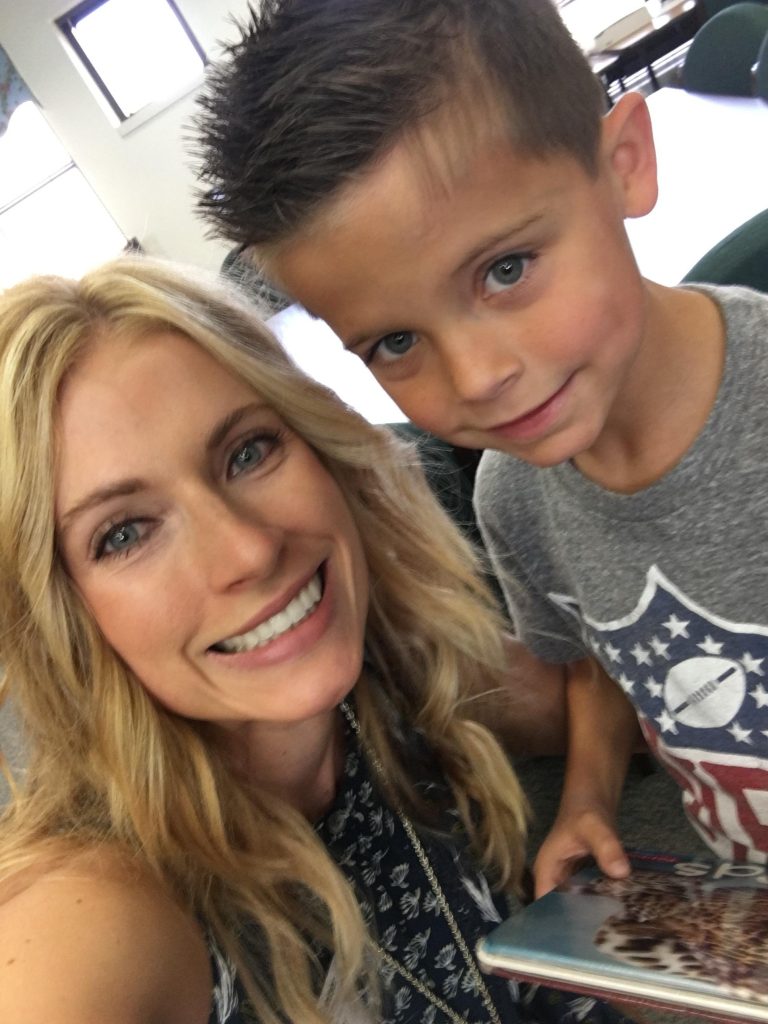 I volunteered in the library at the big kids’ school and I was in the middle of sorting some stuff when I heard this very raspy voice start talking to the librarian.  My mama ears perked up right away…I love that raspy voice so much.  He let me take a pic with him :). 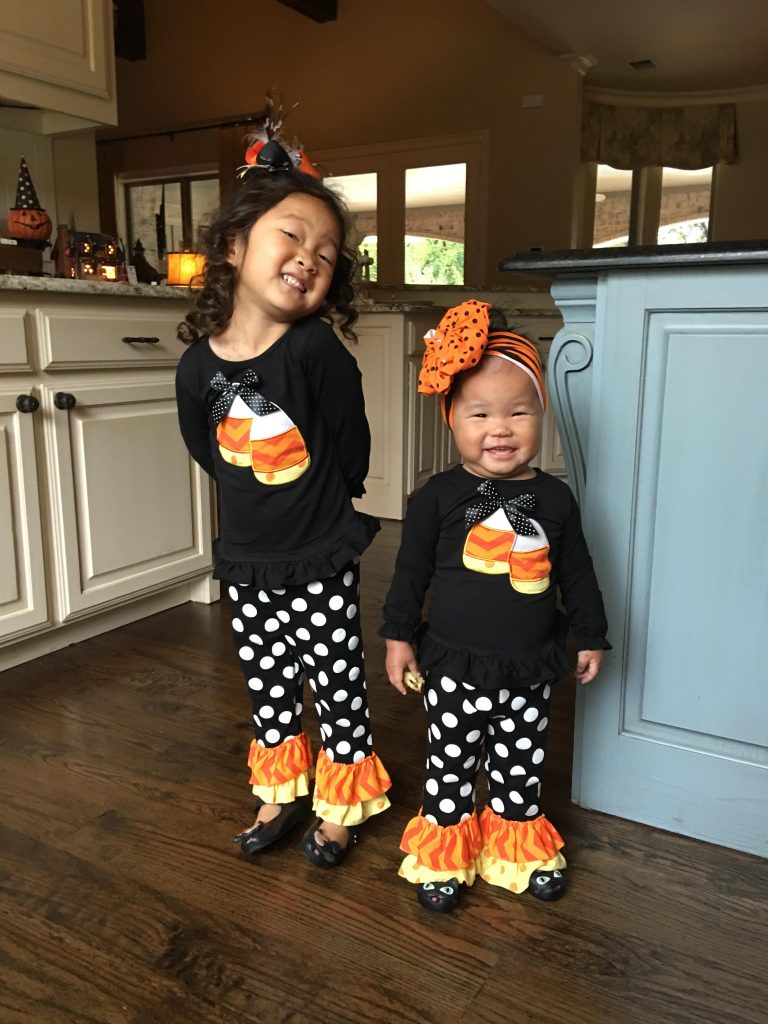 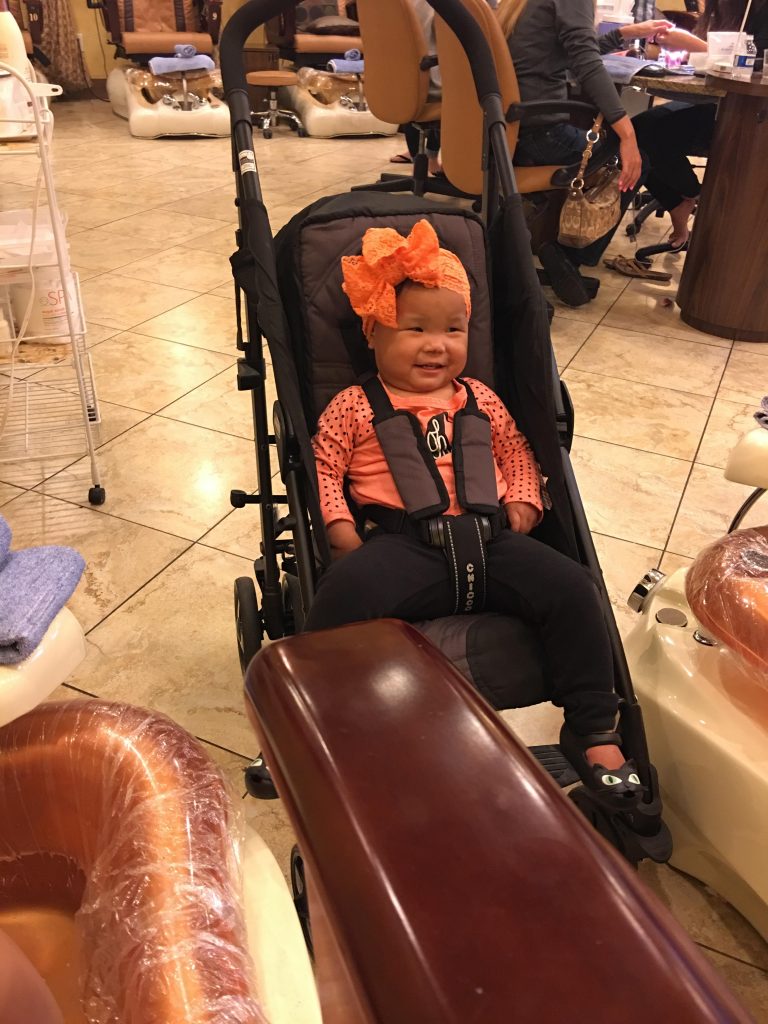 After school, I took the two big girls to get pedicures while the littlest girl watched.  She was fascinated by the whole thing.  Maybe next time, she can get her toes painted too? 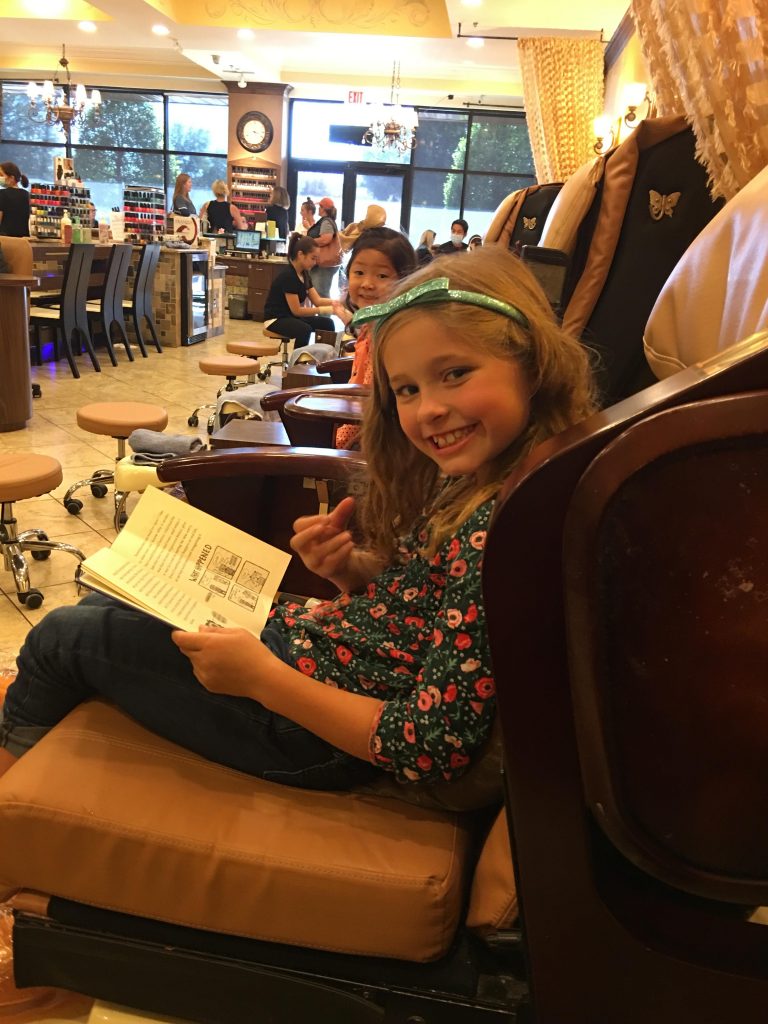 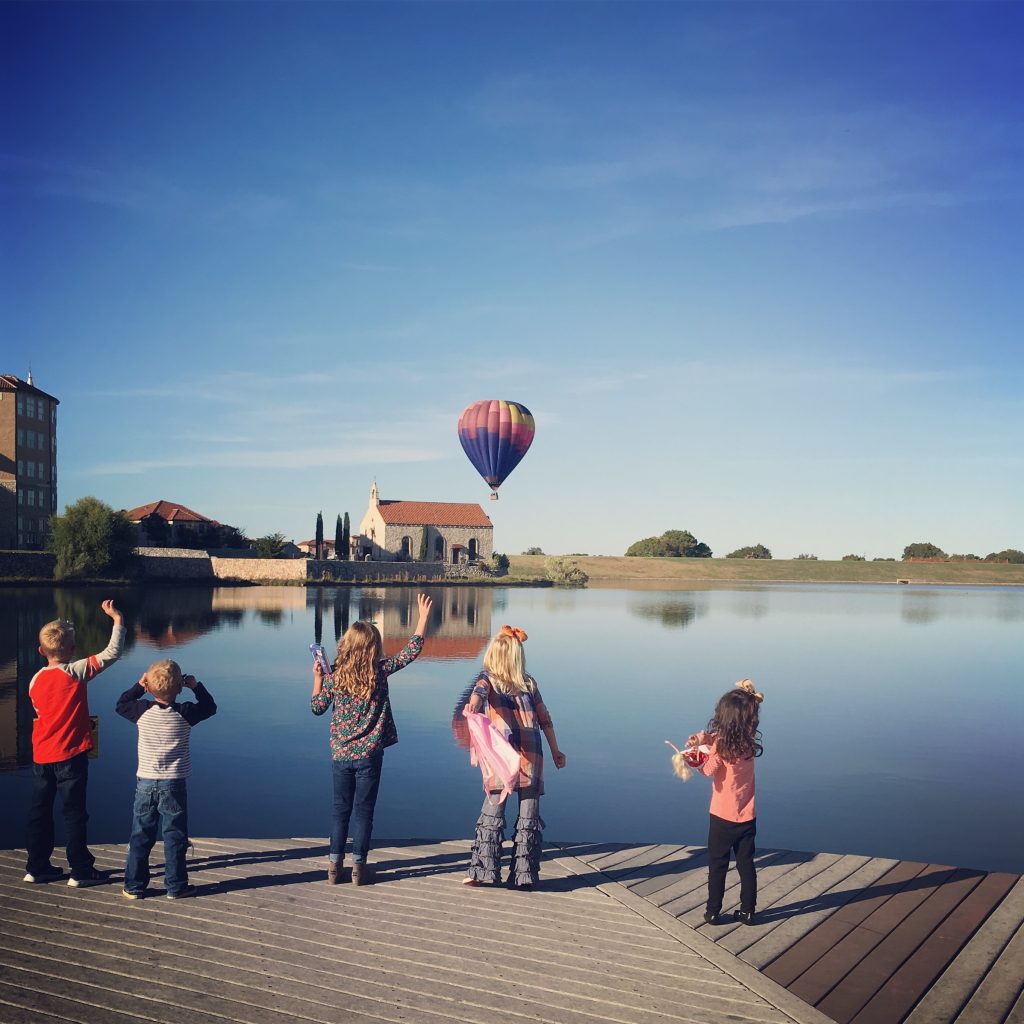 On Friday night, both Andrew and Tab were out of town, so Erika and I walked to dinner with the kiddos.  Our town is so cool :). 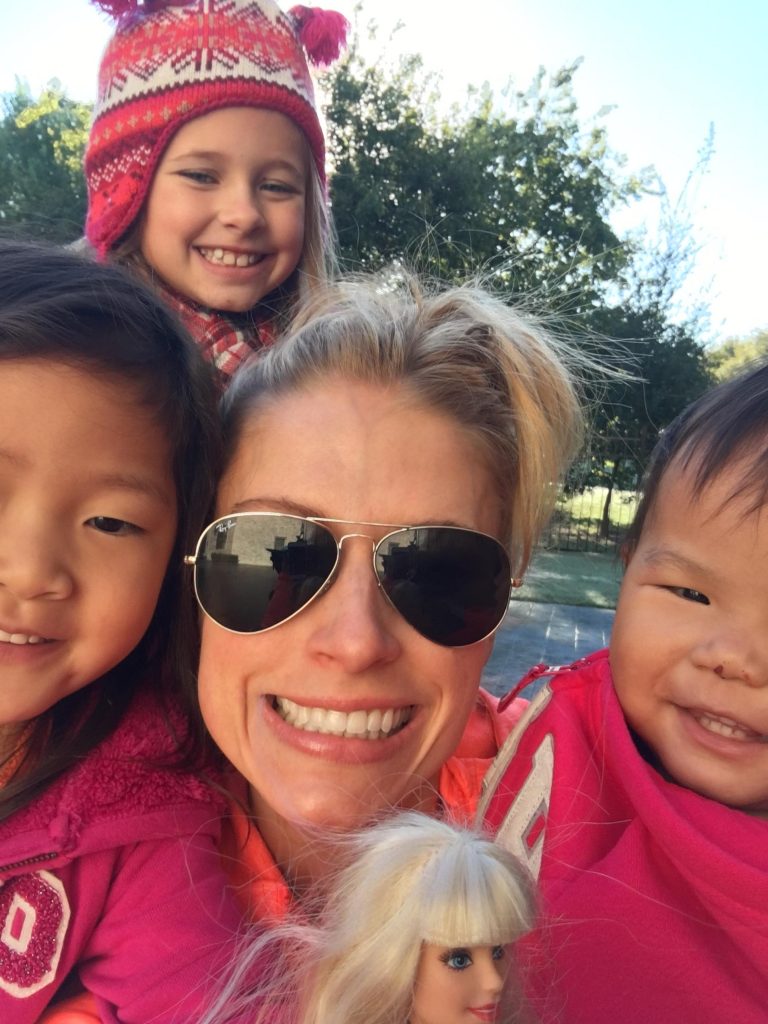 The next morning was chilly and bright, so the girls and I walked to Starbucks for drinks.  Love these girls.  And FYI: The scratch is because Madeley fell and scraped her nose.  Boo. 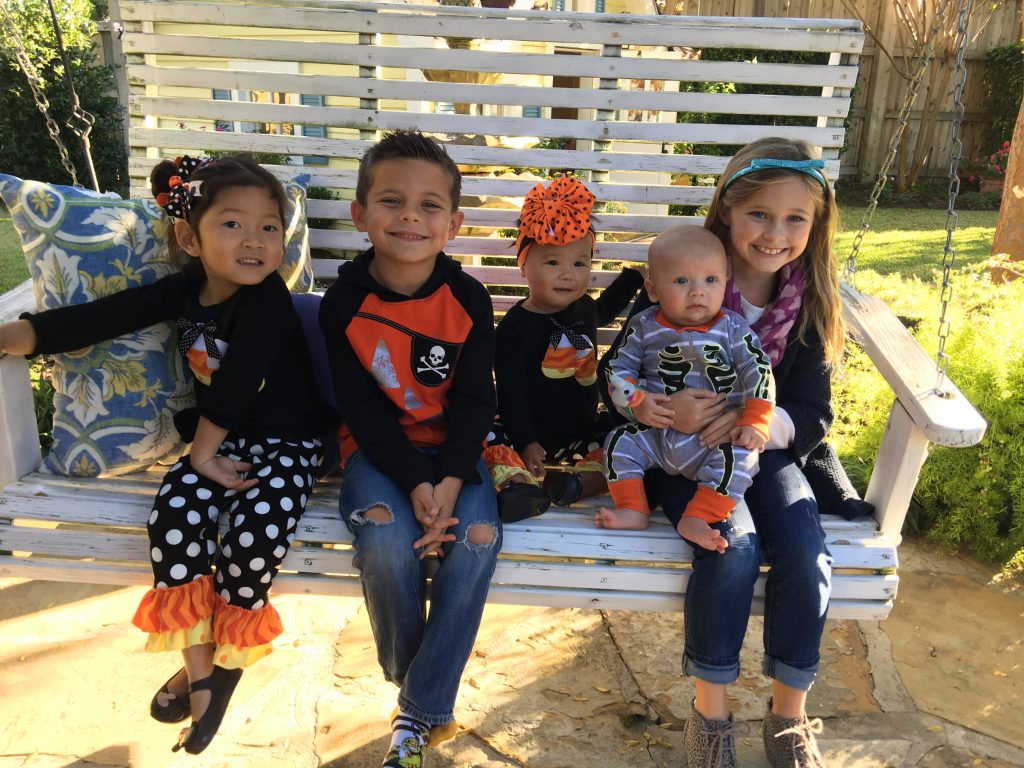 On Saturday night, my mom and dad hosted mine and my uncle’s birthdays.  My parents ALWAYS out do themselves!  Here are all five of Lovie’s little pumpkins. 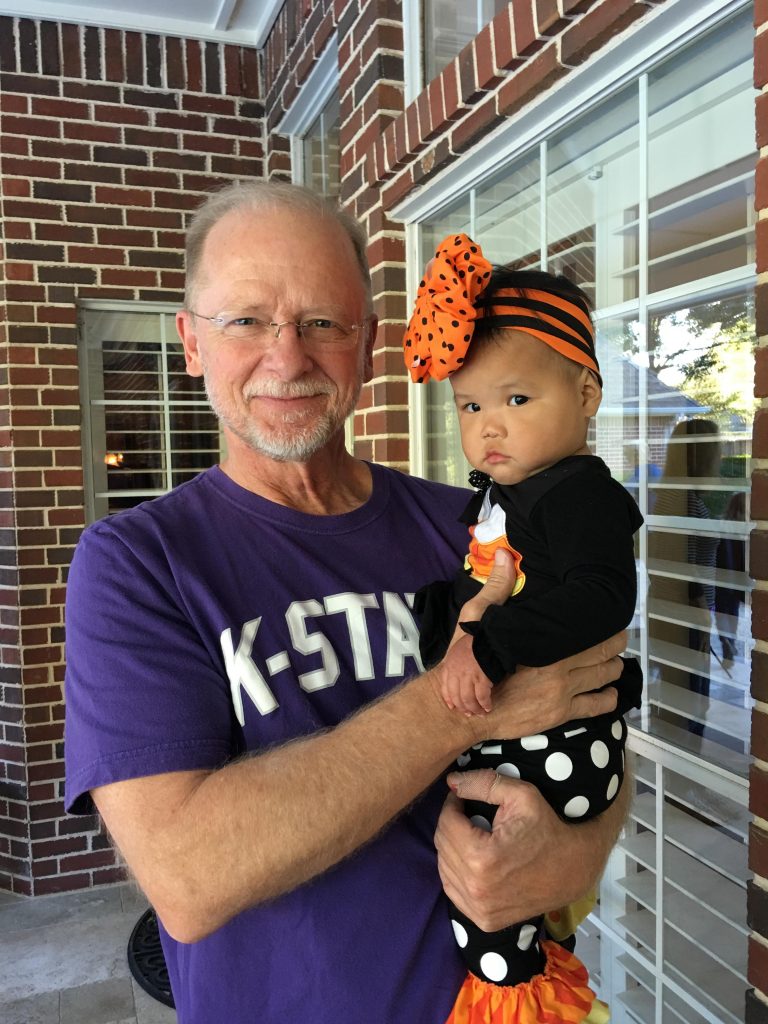 On this special day, we let Papa Jay and Lovie hold Madeley for the first time (my mom would insert a “finally” into that sentence 😉 ).  She’s been doing so well, that we decided to let them have a few snuggles.  My dad wanted me to document this momentous occasion…they both look pensive… 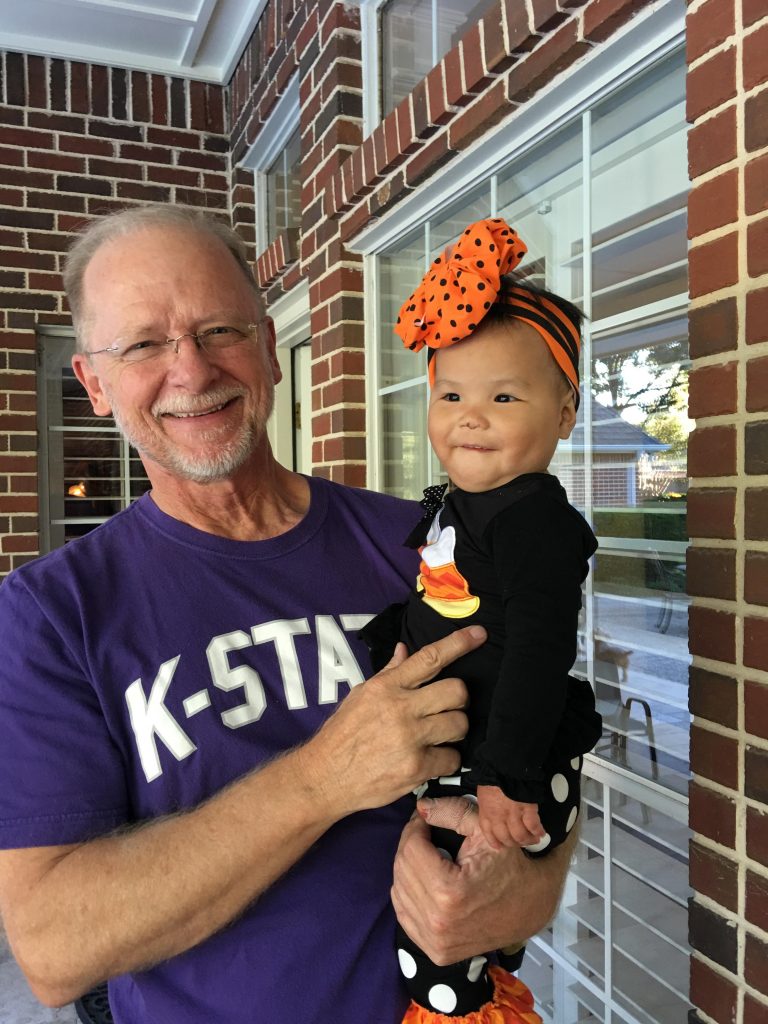 …and then they both realize that everything is going to be okay. 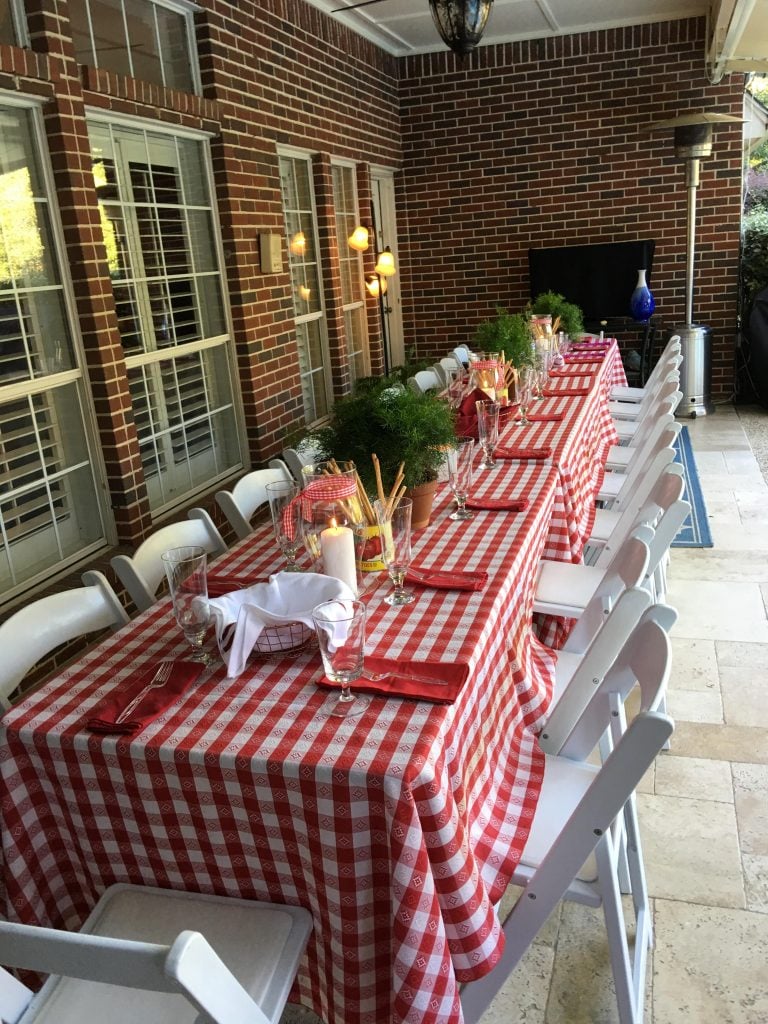 Dinner was an Italian theme.  Isn’t it so pretty?  My mom can sure host a party! 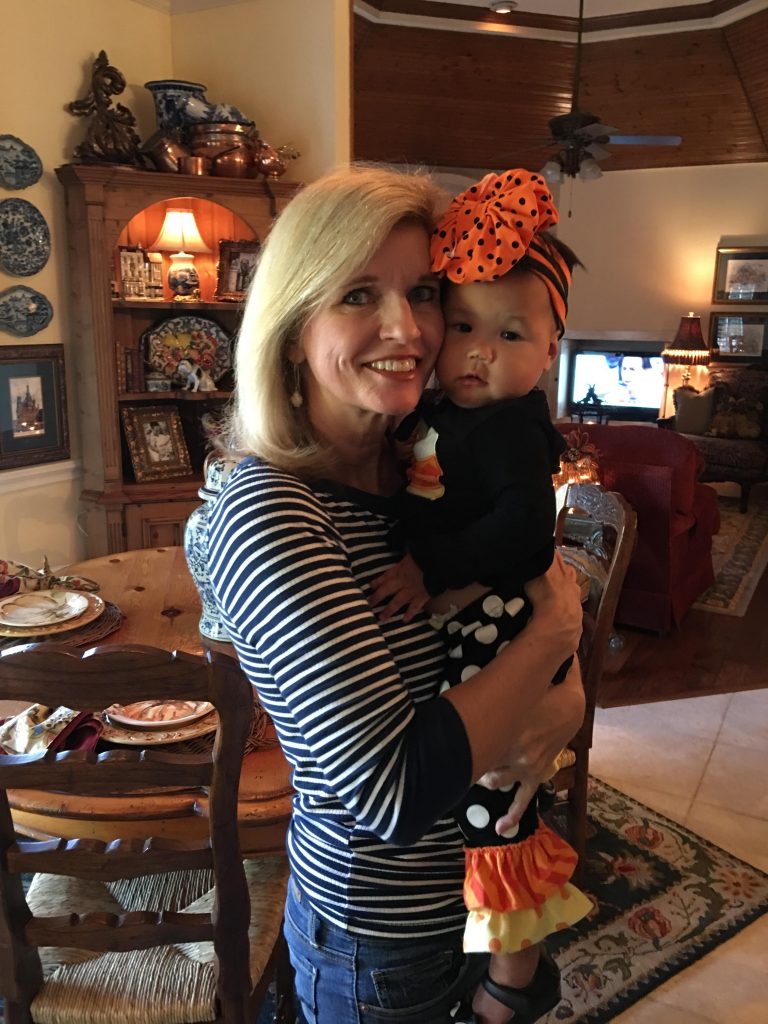 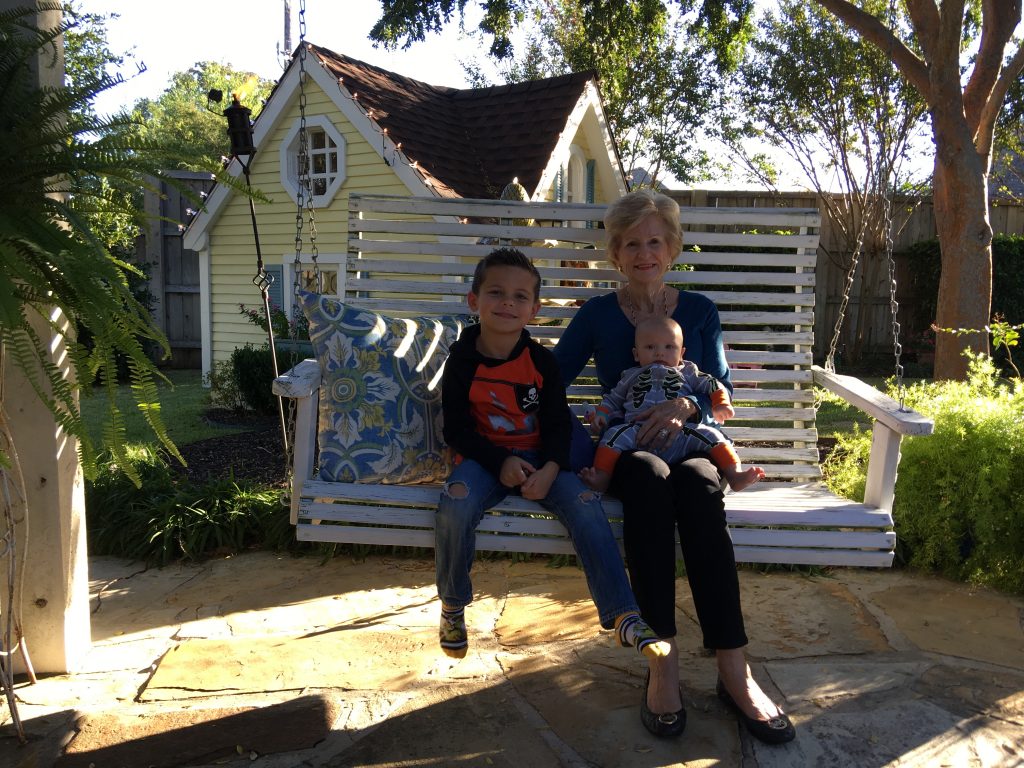 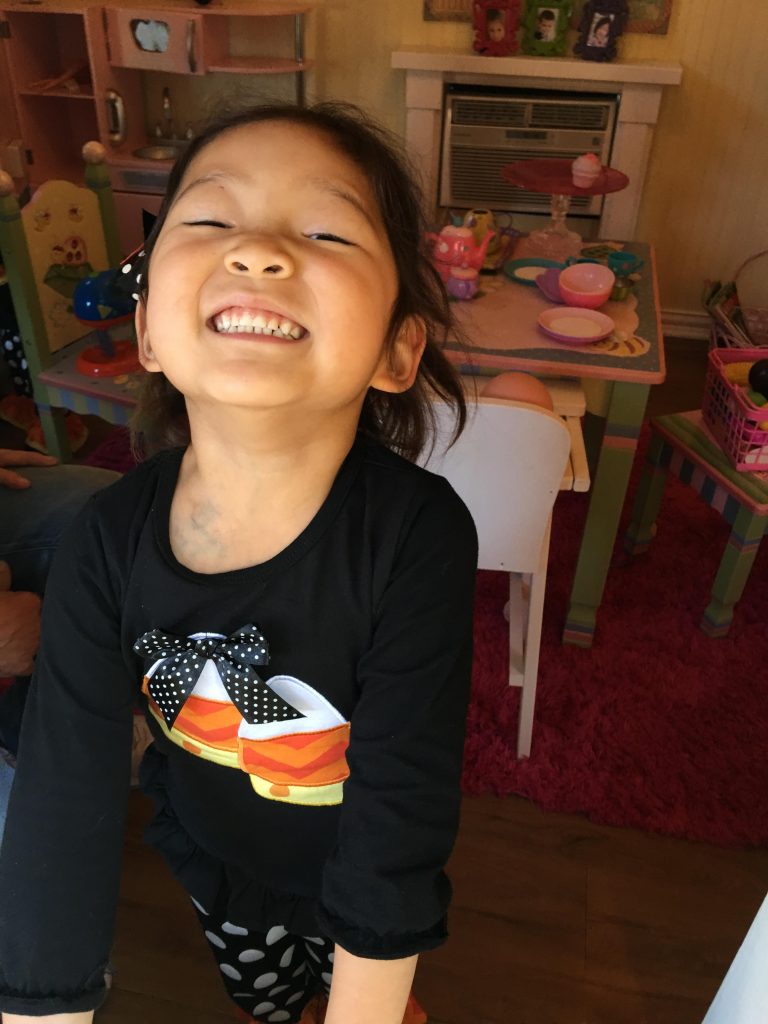 This was Madeley’s first trip to Lovie’s house, which means it was also her first trip inside the playhouse too! 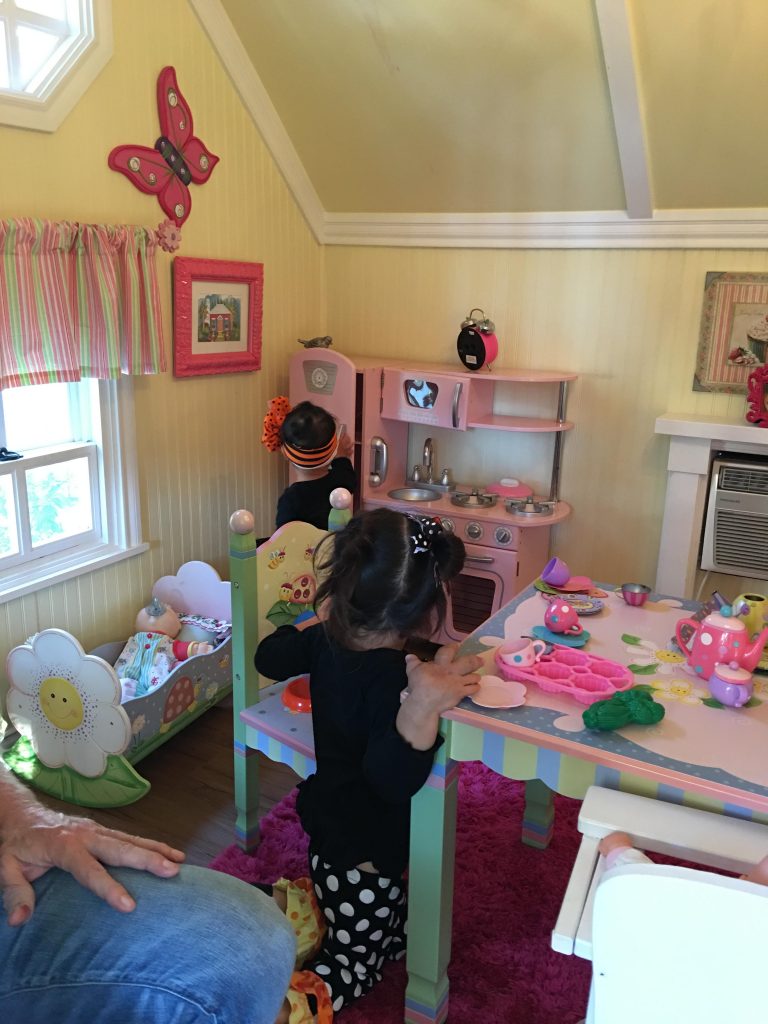 My two busy bees inside with Papa Jay… 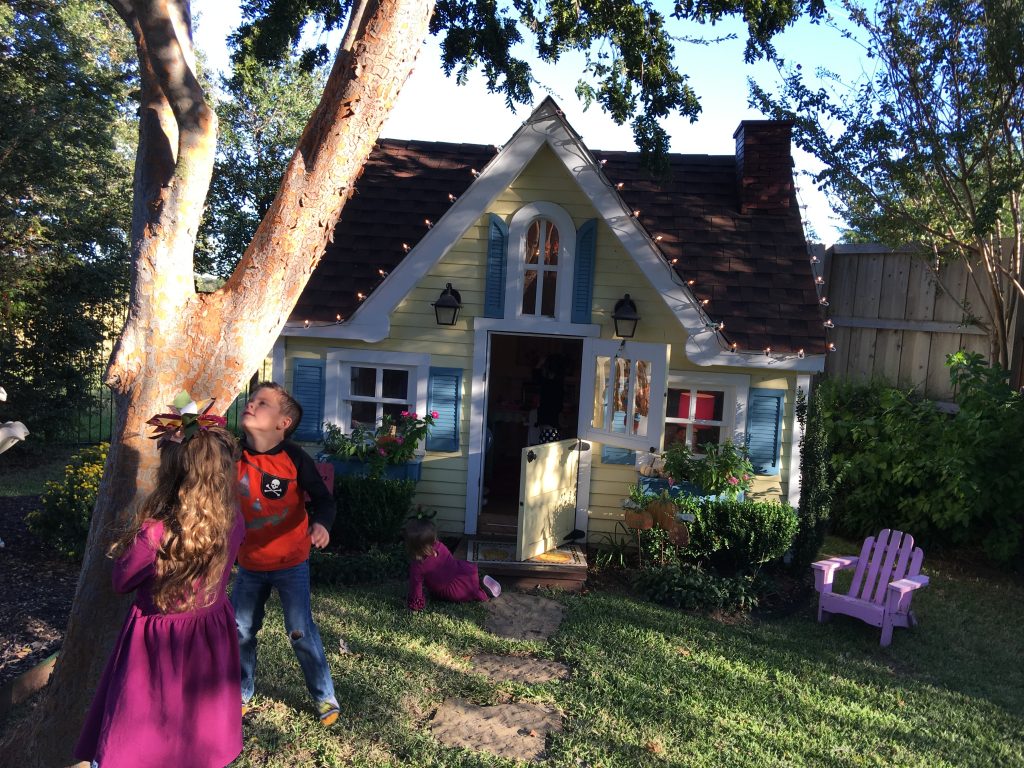 …another one of my busy bees outside with his cousins Paisley and Penley (well, they’re my cousin’s kids but we call them his cousins because they see each other so much!). 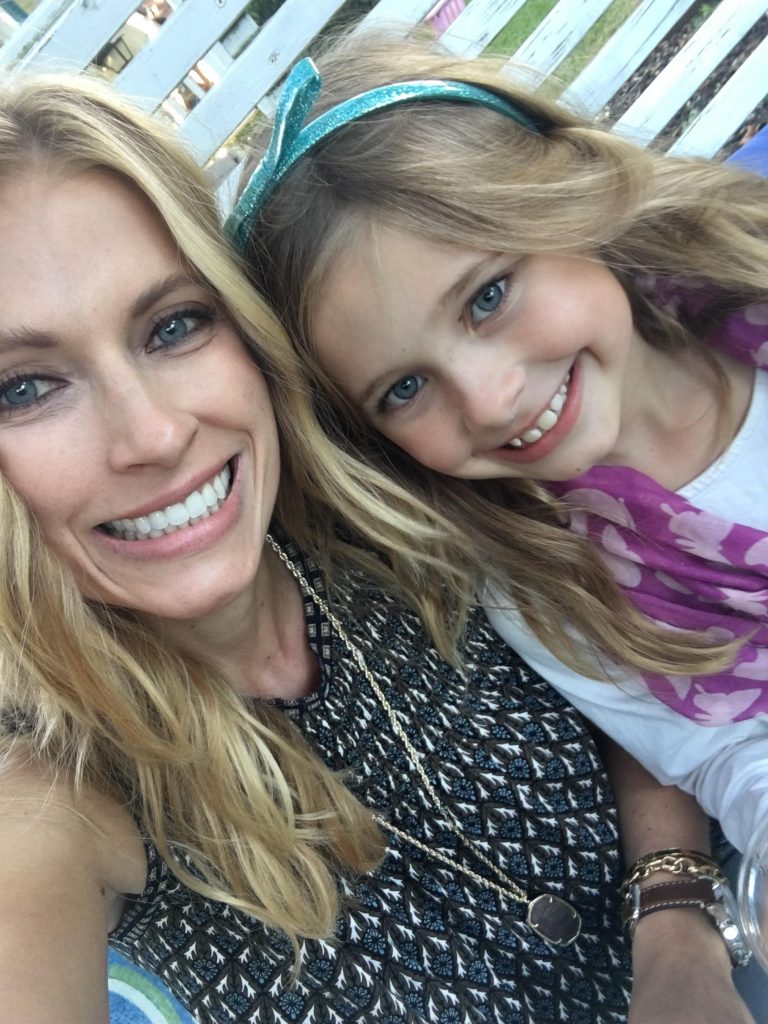 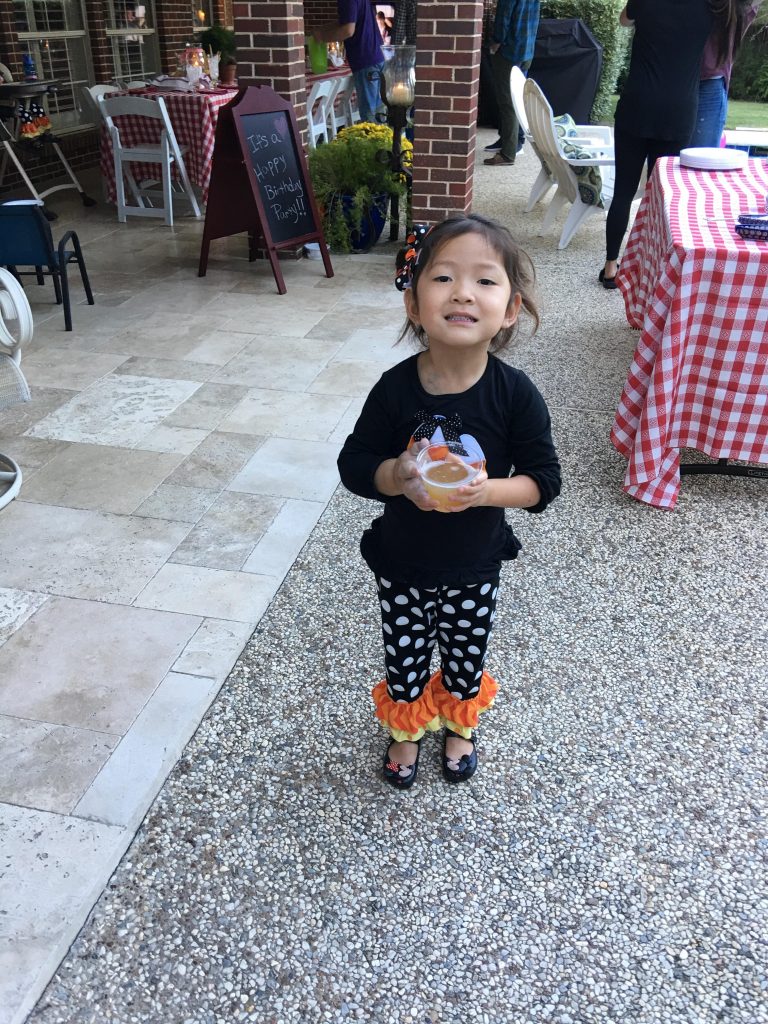 All the fun (and punch!) at Lovie’s house! 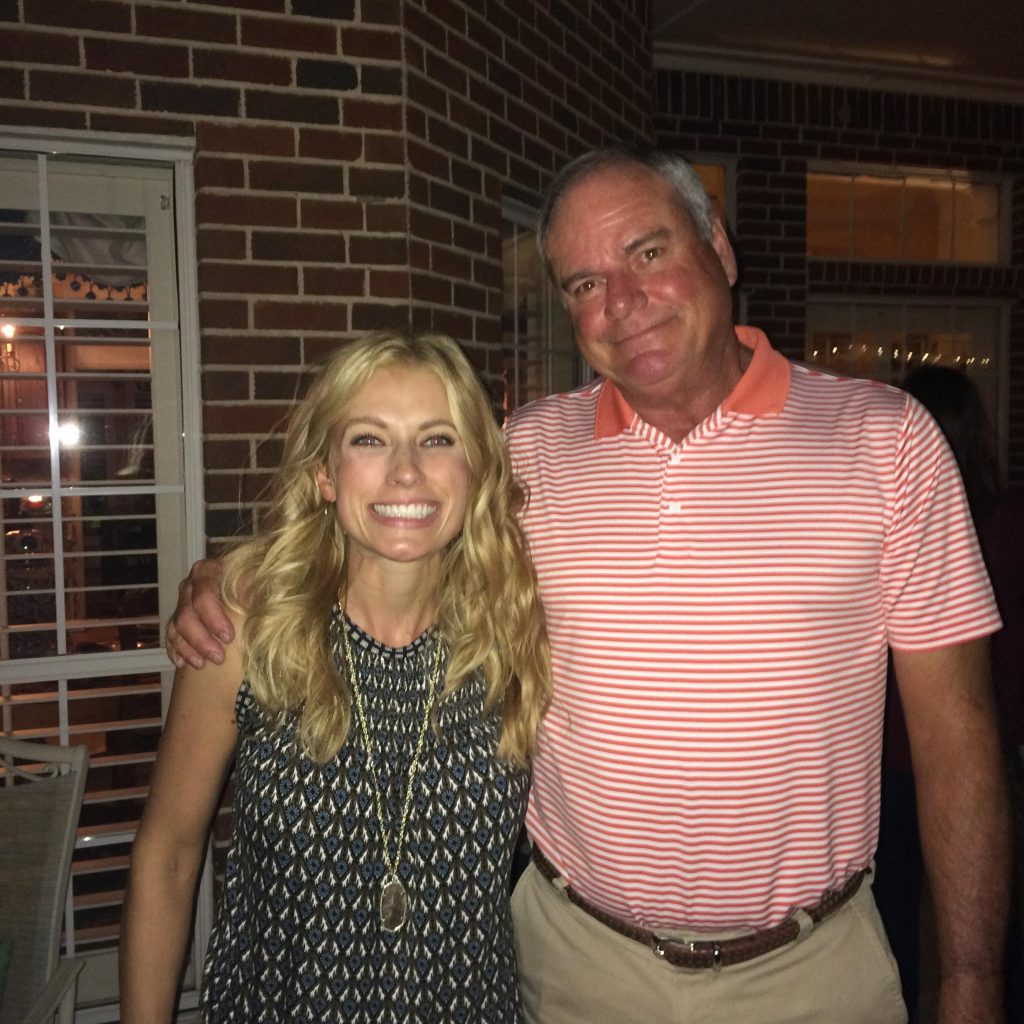 I love my Uncle Bryan.  He and my mom are each other’s only siblings…and my grandmother will hate me for pointing this out…but they’re only 10 months and 29 days a part.  How funny is that?  (I don’t think my  grandmother found it funny at the time 😉 ).  #irishtwins 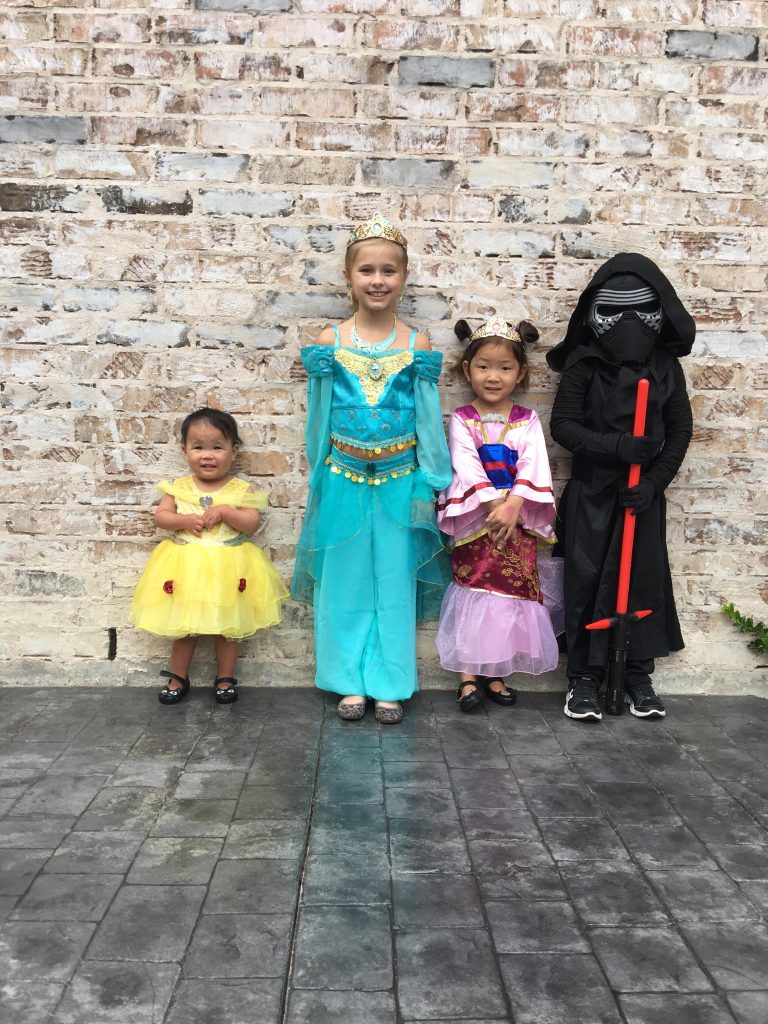 The next evening was one of our very favorite nights of the year…our Sunday school class Harvest Party.  WE LOVE THIS SO MUCH! My kids always wear their Halloween costumes and this year, we had Jasmine, Kylo Ren, Mulan and Belle.  I let them pick their own costumes…but the big girls picked Madeley’s 🙂 . 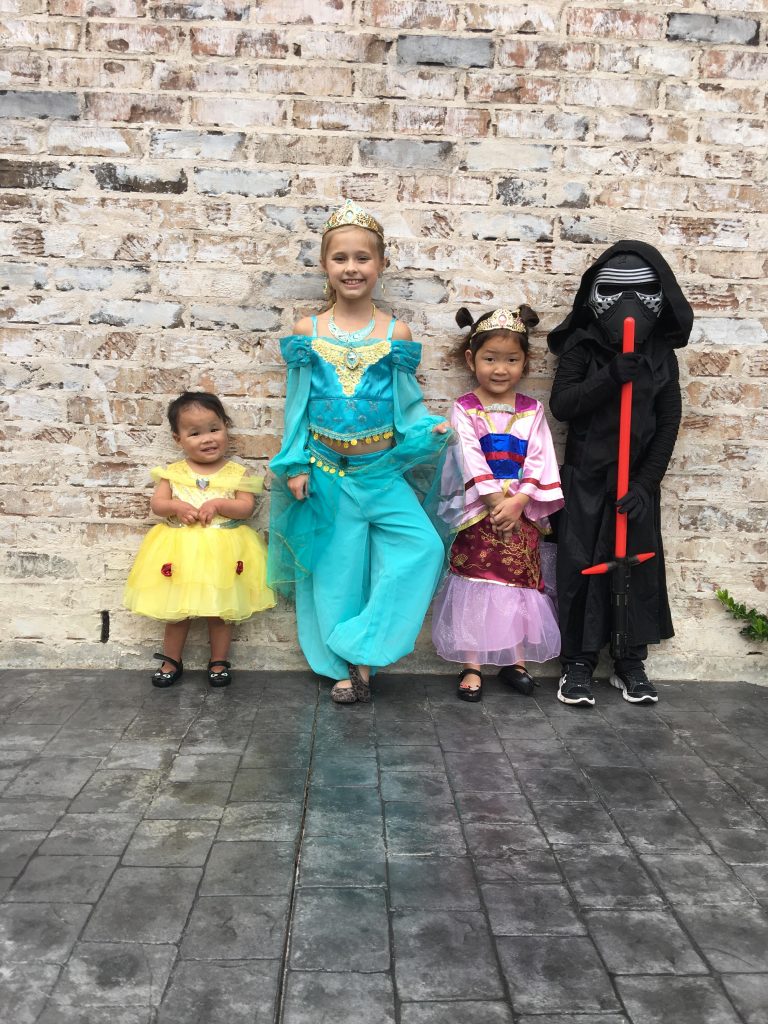 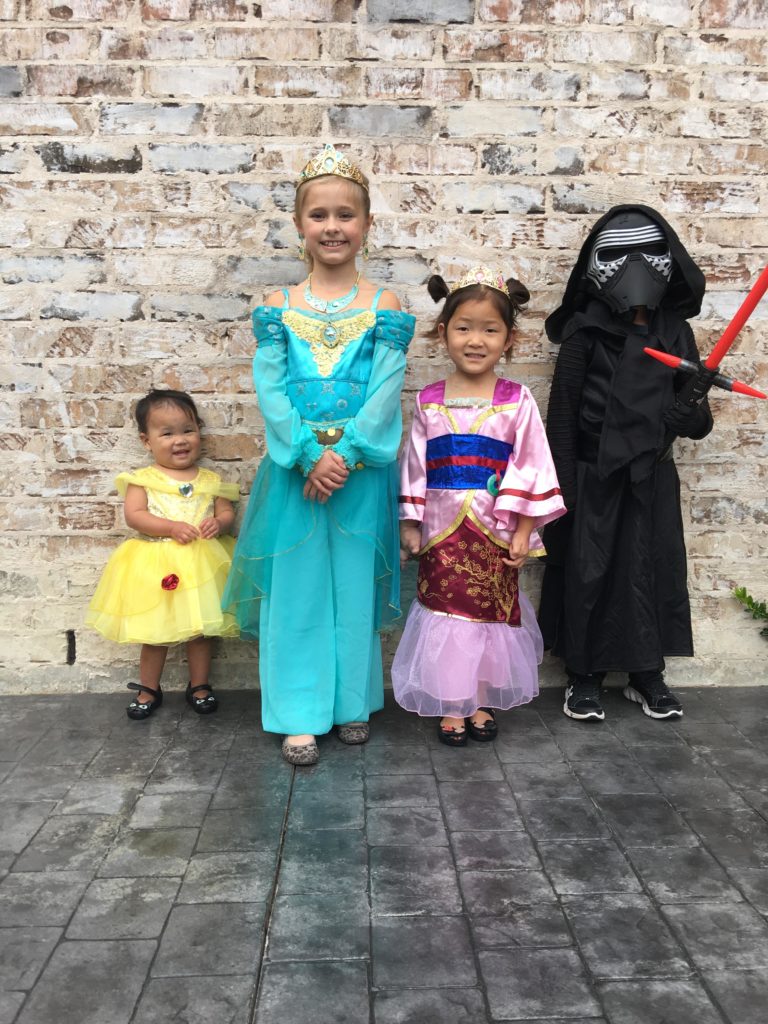 One more just because. 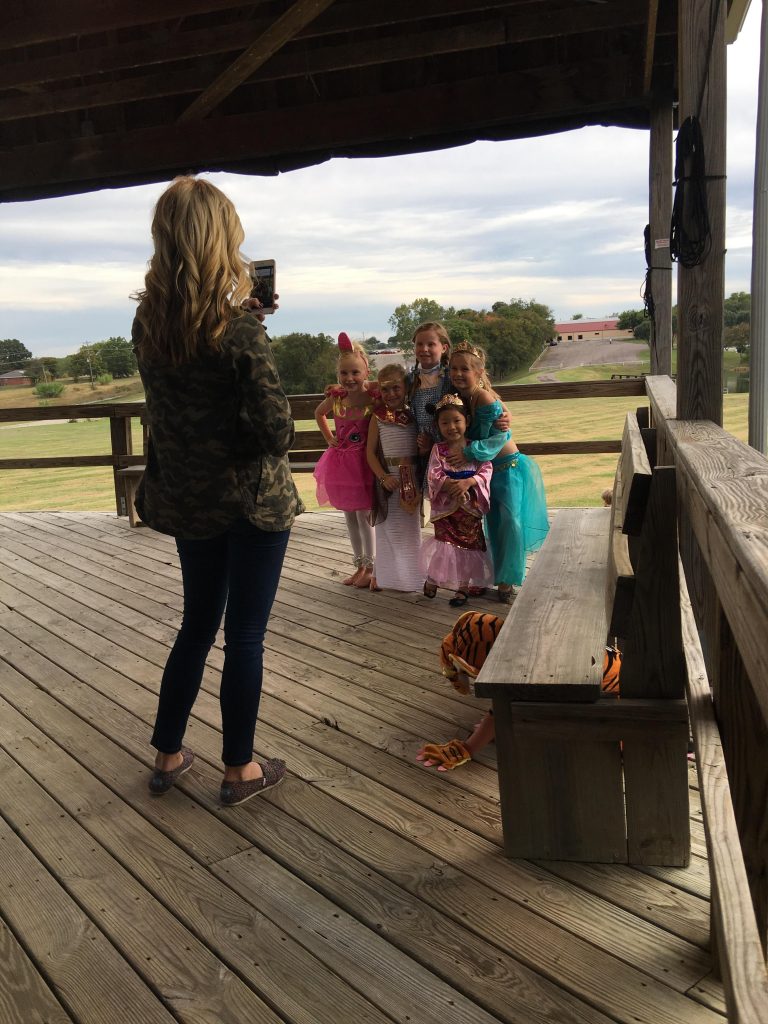 We have so many friends and their families attend each year.  Here Erika is taking some pics of sweet girls (with tiger Bowen crawling up). 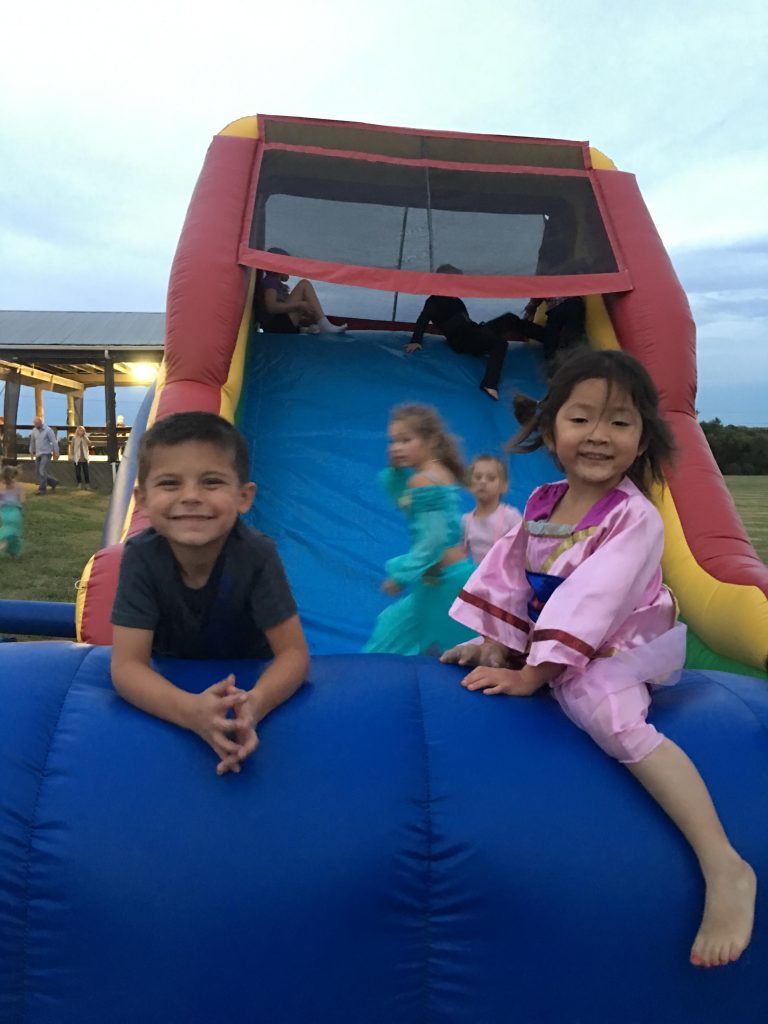 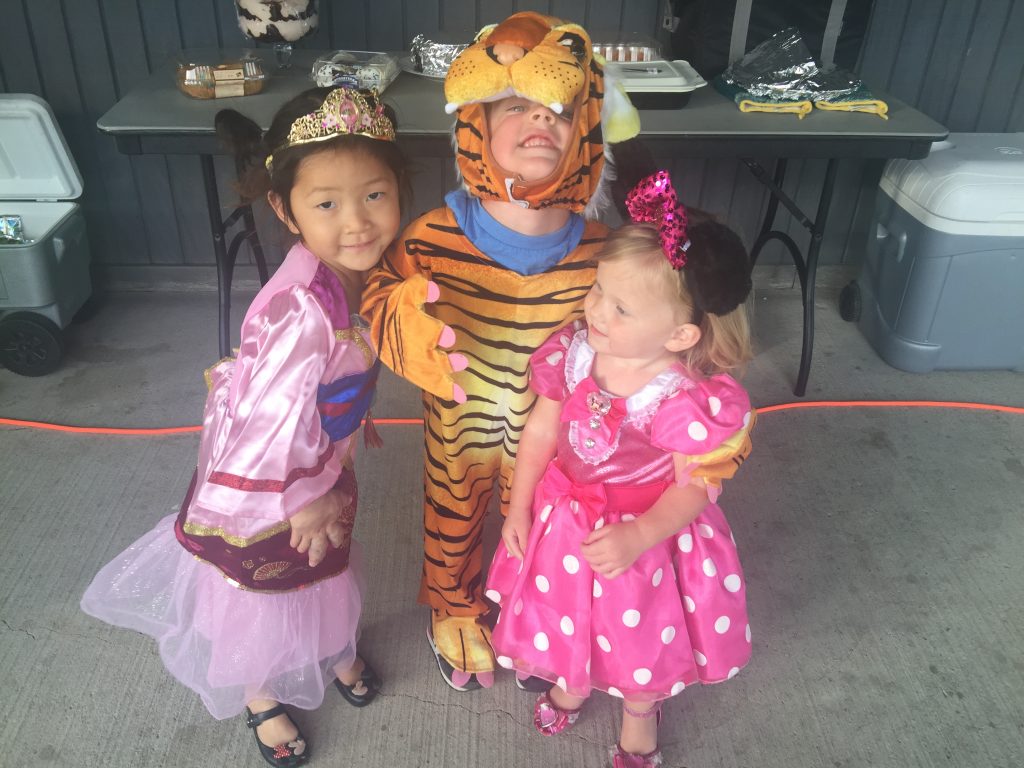 Mulan, a tiger and Minnie Mouse. 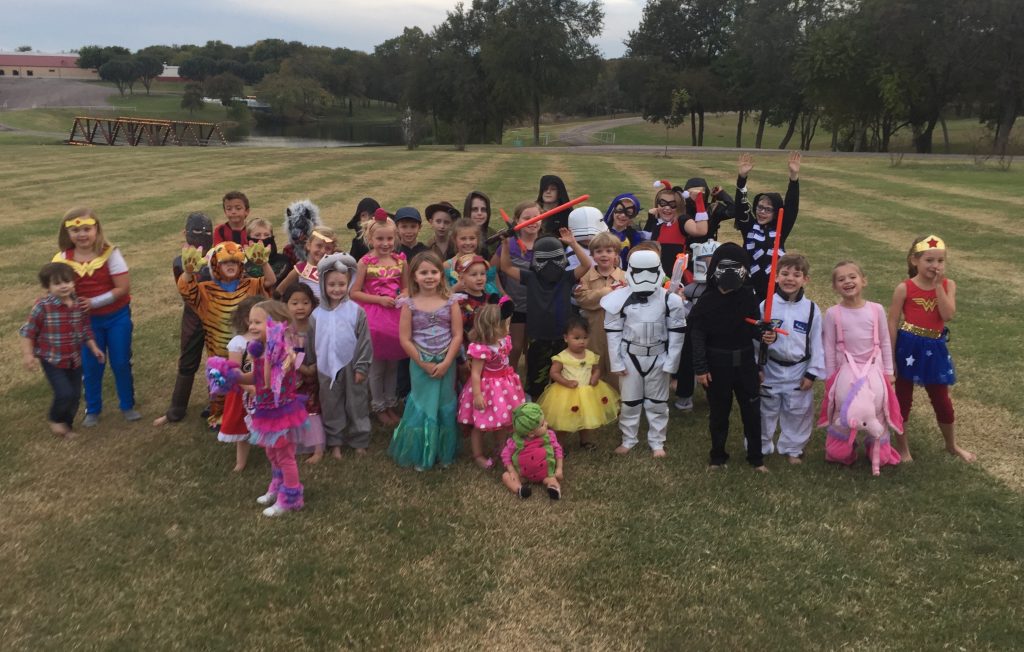 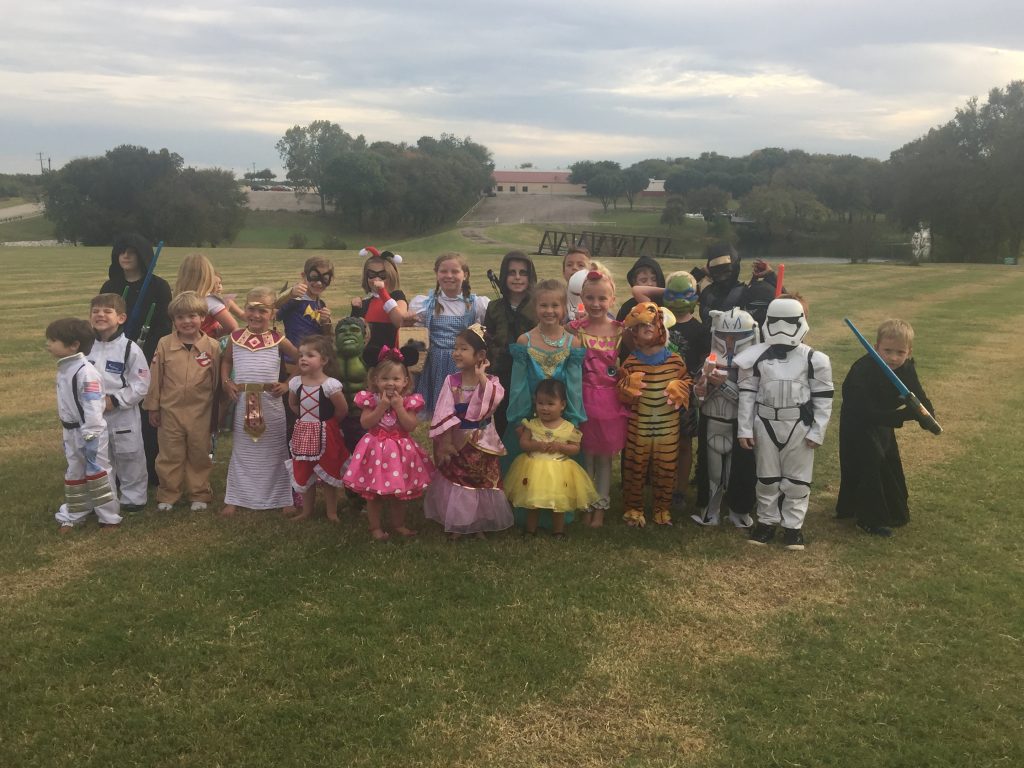 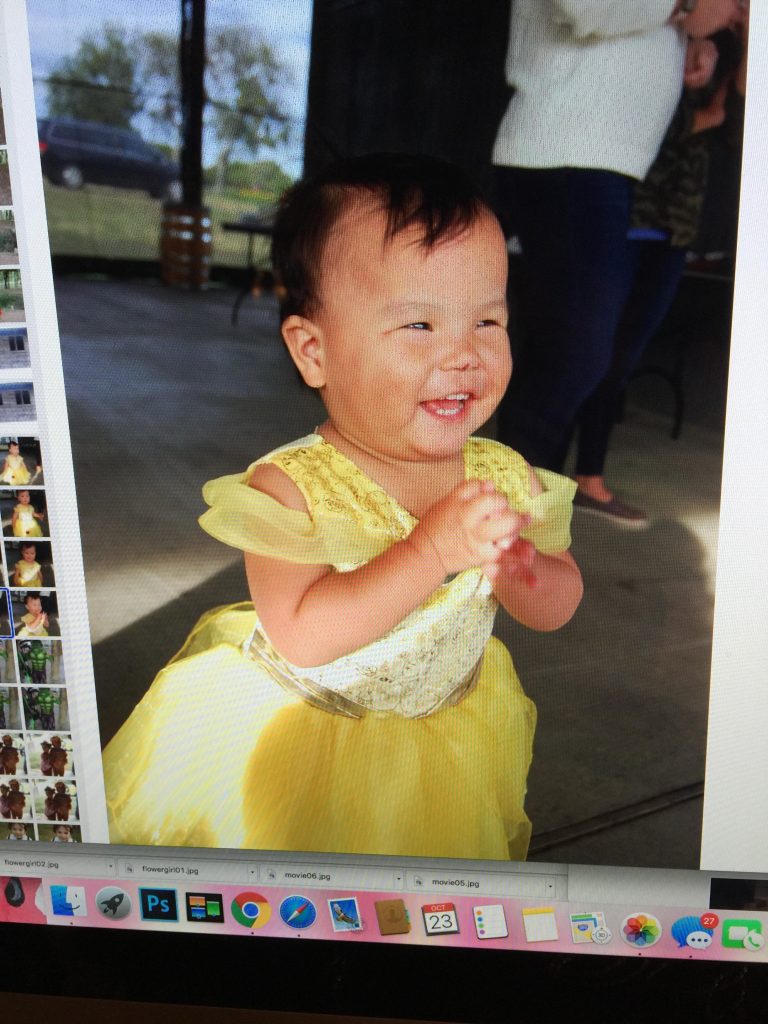 Andrea texted me this one :).

And then…things got a little crazy.  Ashby fell down and…she broke her left arm.  INSERT PANIC HERE.   Her right arm is the one affected with Klippel-Trenaunay Syndrome…so she really depends on her left arm…and that was the injured one.  The bad news was that she was in pain (both arms hurt now!), but the good news was that it wasn’t her affected arm (that could have been extremely serious…I’m talking hospitalization serious) and she won’t have to wear a cast because of where the fracture is…it’s between her shoulder and her elbow (right in the middle of that ).  After a trip to the ER, they said it was clean and should heal up on its own.  We’re being extremely careful now with both arms.  I’m so sad for her…but I’m so thankful it wasn’t worse. 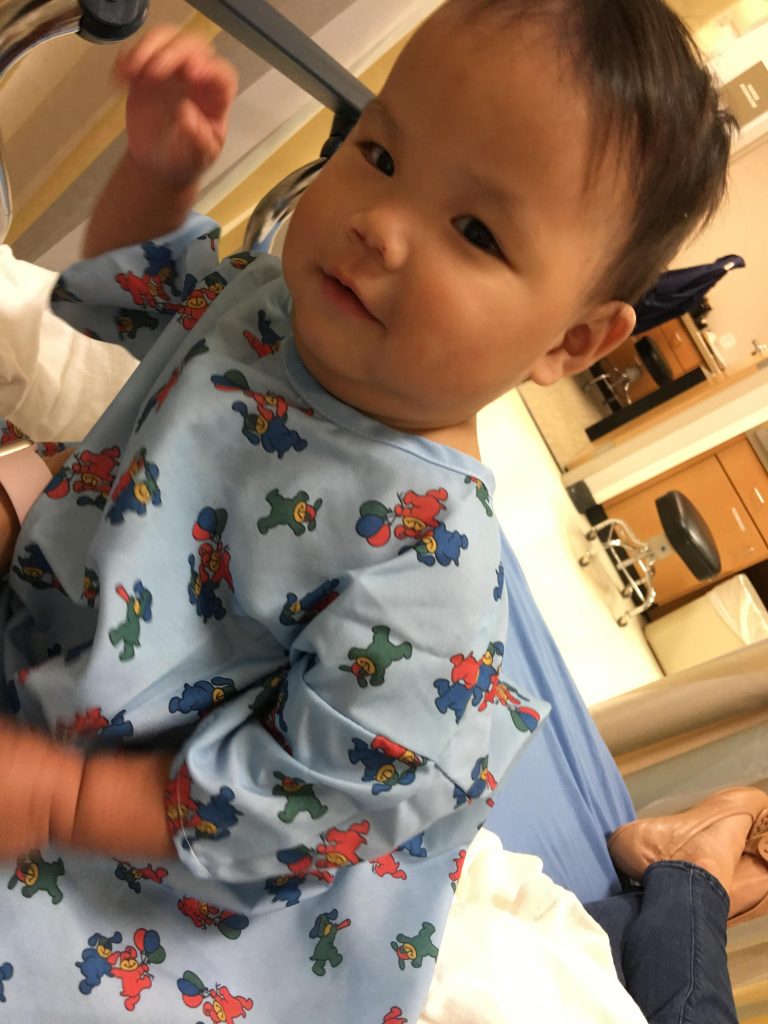 …on Tuesday morning, this one had a little procedure on her ear.  She had a few growths that needed to be removed, so after an early morning trip to the hospital, she was all checked in, worked on and released without any hiccups.  As my mom pointed out…it’s always going to be something with this many kids. Ha! 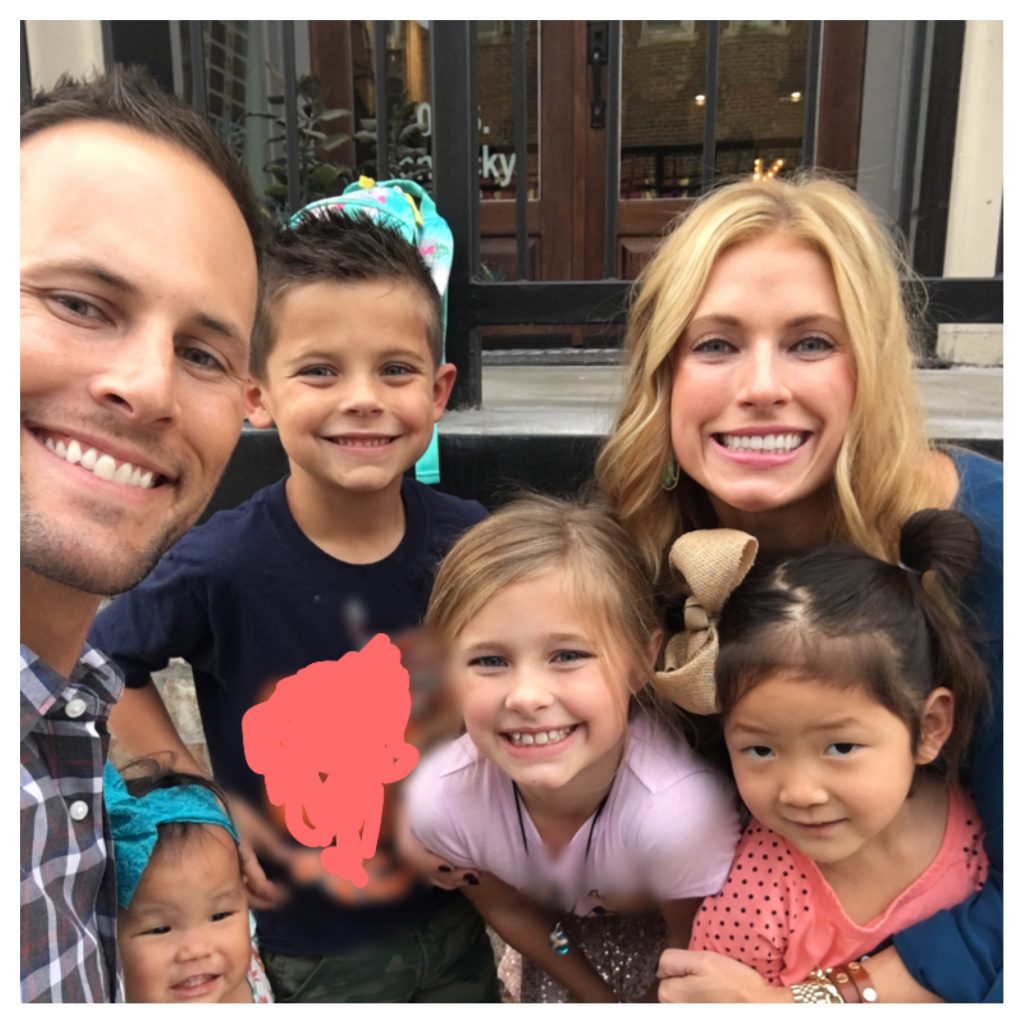 On Tuesday night, we met the Slaughters on our town square for pizza to celebrate my birthday.  (It was school t-shirt day at the big kids’ school…so please excuse my artwork on top of their tees).  Love these five so very much! 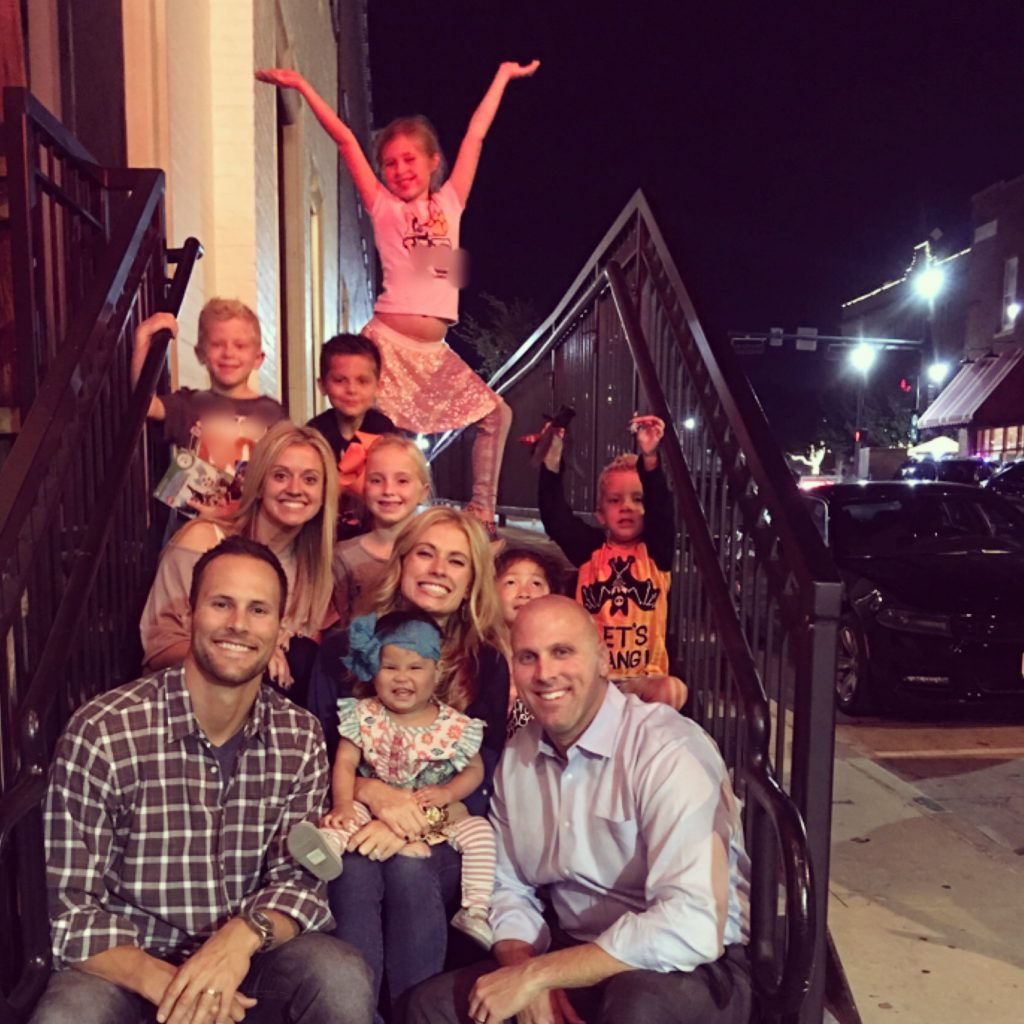 My birthday ended on such a high!