Ah!  Tomorrow is the four month anniversary of being a forever family with this cutie pie… 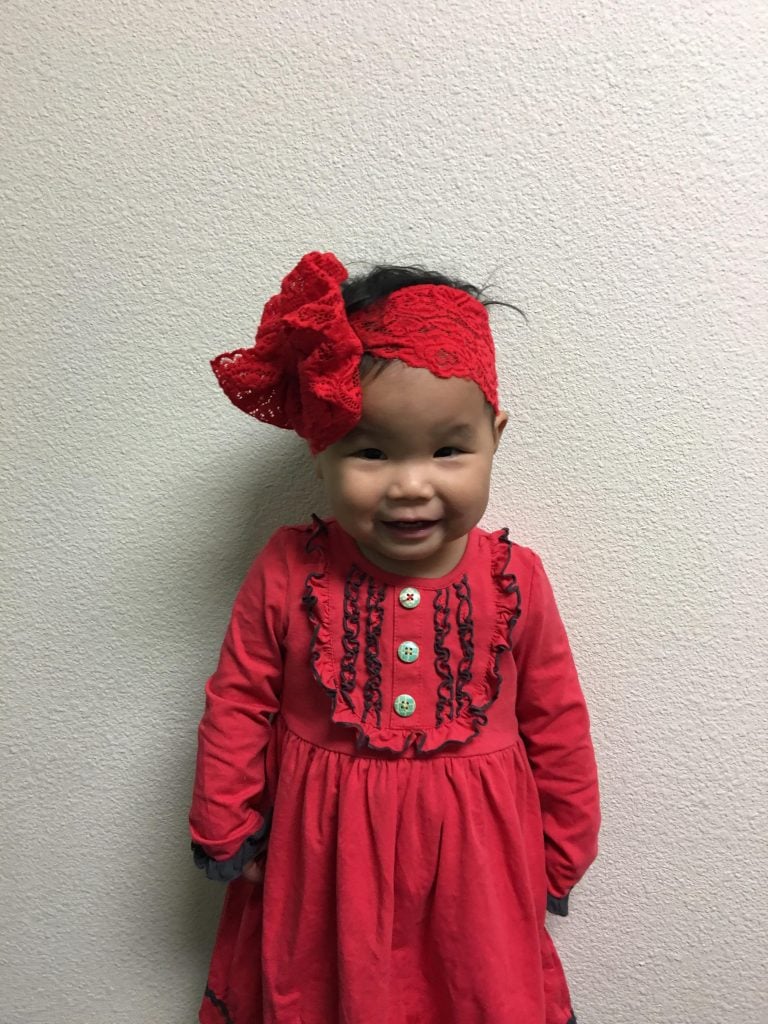 I am so glad that it’s time for an adoption update because I just feel like talking about my #4 today 🙂 .  She is PRECIOUS!  I kind of pinch myself sometimes because she’s just a big ball of joy and happiness.  Andrew and I were talking about Miss Madeley the other day and we decided two things…

1: She is by far the most content of all of the kids.  This one right here is happy doing anything and everything.  You know, as the youngest of four, her day to day routine is much different from say Kensington’s.  With Kensington, we had no one else to focus on, worry about, mess with…it was all about her during the day.  Well, you can’t do that with four.  Madeley has a routine every day but a big part of that routine is shuttling older kids to and from school, speech therapy, dance, basketball practice, doctor appointments and such.  She and I are in and out of the car so many times a day getting the other three all squared away and she is happy about it EVERY SINGLE TIME.  She just goes with the flow and is super content.  You know, sometimes, I’m tired and irritated after getting in and out of the car from school, the grocery store, the tailor, the ENT and such but she just smiles.    Content.  She is very content.

2: She is by far the most curious of all of the kids.  The first few times I wrote about Madeley’s progress at home, I mentioned how she was in to everything.  And I mean…everything.  We could have baby-proofed this house like you wouldn’t believe and she still could find something to get into.  It was kind of maddening because she could find ANYTHING and EVERYTHING to get in to.  I would say that went on for the first two months, but over these last two months, she has completely stopped.  I think now, we’ve realized that she’s just very curious and once she’s checked out whatever it is, she’s no longer curious.  She is no longer curious about our house, because I promise you this…she has checked out every square inch.  But…if I bring a shopping bag home and set it on the floor, she wants to look inside and check it out and then she’ll toddle off.  She is curious to check out new stuff.  If my mom comes over and sets her purse down, she wants to take a look.  She doesn’t remove anything or do damage, she just wants to examine this new item brought into our house.  She is curious.  I’ve never seen another kid so interested in things before.  She’s very aware of her surroundings and wants to check things out herself. 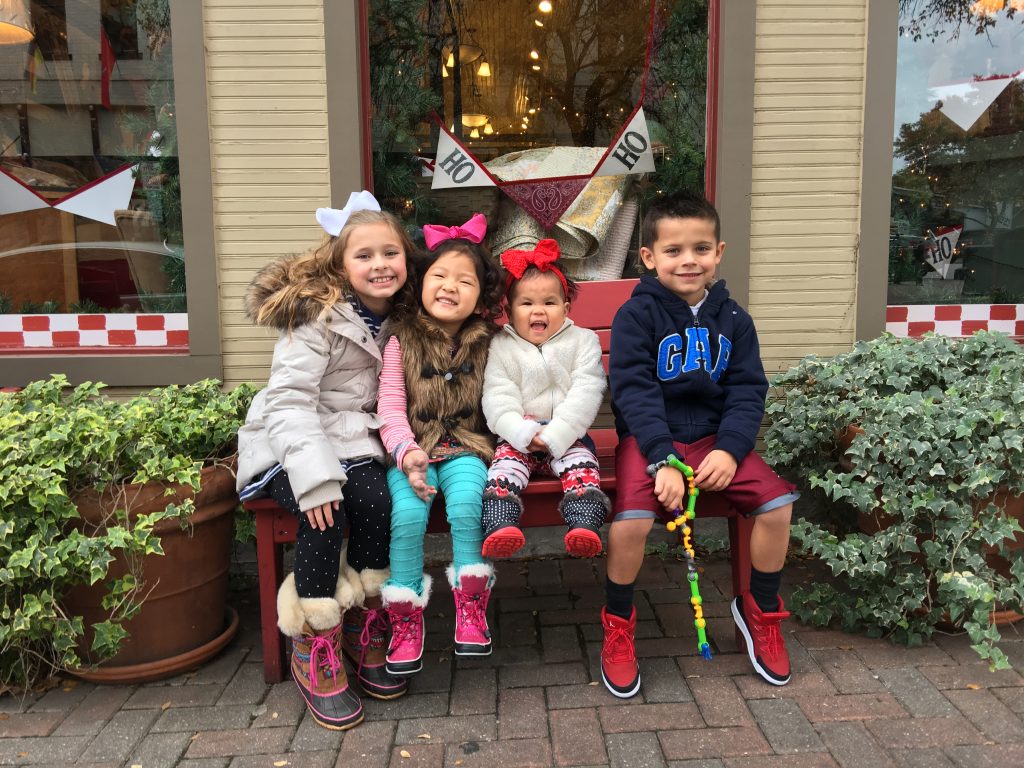 Madeley is basically happy all of the time.  She doesn’t have to warm up.  In the morning, my other three are sweet when they wake up, but they’re quiet, reserved and you know…just waking up.  Not this one.  She wakes up, pops up in her crib and immediately starts waving and smiling.  She is always so smiley and happy…unless, she’s hungry.  If she’s hungry, she’s screaming at the top of her lungs until she’s eating.  The other day, Erika was like “who is that screaming in the background” and I was like “it’s Madeley waiting for her leftover stew to come out of the microwave”.  She was standing in the kitchen screaming at the top of her lungs because she wanted to eat.  Now.  Right that second.  As soon as I pulled it out and put her in the high chair with it, she was all smiles and happy.  But if she’s hungry…watch out.  She’ll scream.  You know those veggie/fruit pouches that kids squeeze into their mouths?  She loves those things.  I mean…she would eat like 12 a day if I let her.  I’ll find her standing by the pantry door screaming and pointing because she wants in and as soon as I open the door, she’ll toddle right over and grab one and stop crying. 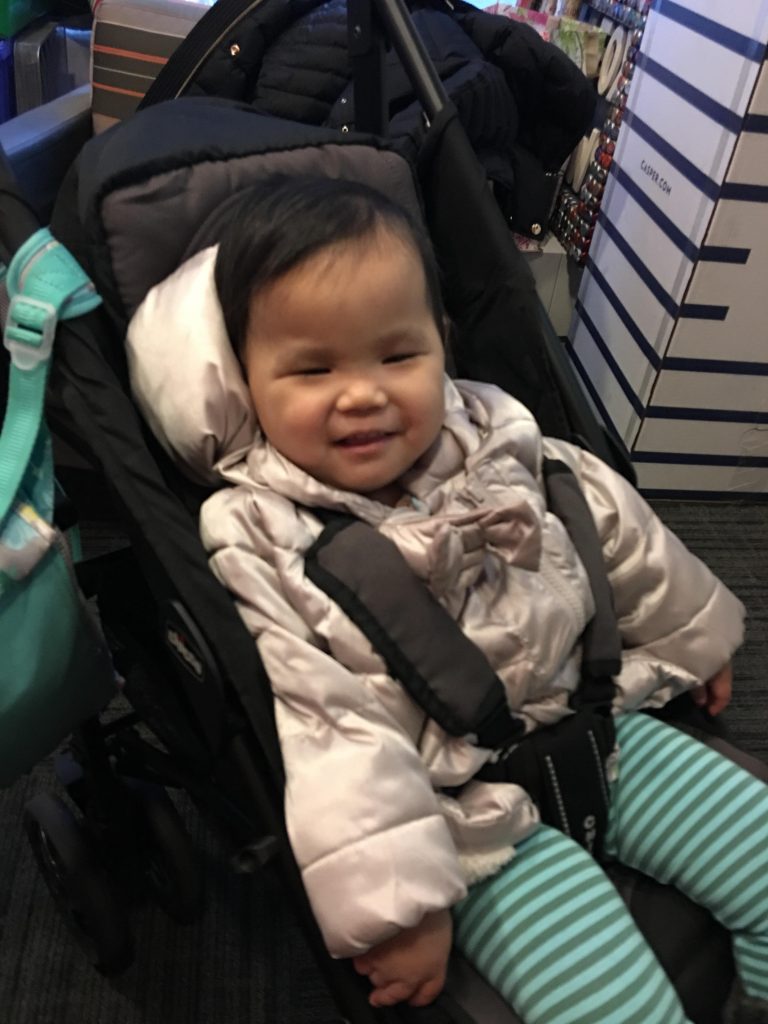 Development-wise, she’s doing great!  Her receptive language is really good.  I can say “go get a book to read” and she can go to the next room, pick out a book and bring it back to me to read.  If I say “go get your shoes for Mommy”, she’ll go get her shoes by the door and bring them to me.  I really think she understands so much of what we say.  Her vocabulary is increasing: Dada, Mama, Poppy, Papa, BoBo (for Bowen), drink, up and words like that come out of her mouth all day long unprompted.  She’s very good at mimicking sounds and words too, so we work on that a lot.  She can tell you what sound a dog makes, where certain body parts are, she can point to people in pictures and identify them if I say their name, she can go retrieve her ball, her push car, her baby doll and other toys she plays with often.

We’re watching her physical development because she’s still not growing as quickly as she should be.  She’s scheduled for more blood-work at the end of January, and then we’re going to go back to the endocrinologist in February just to make sure everything is okay.  She’s very small for her age (even when you factor it on a Chinese growth chart), so they just want to keep tabs on her physical development and make sure she’s not failing to thrive.

I would say that her favorite people right now are me, Andrew, Kensington, my dad, Bowen and Samuel.  She loves everyone…but she’s enamored with this group.  My cousin has a precious baby that’s Samuel’s age but she can tell who is who and she ADORES her some Samuel.  It’s really quite cute 🙂 .  Andrew and I are excited because we’re going to go away just for the weekend and all four kids will get to stay with my parents and we know Madeley will be thrilled to have extra Papa Jay time.  If we could just figure out a way to get Bowen in the mix, her world would be made for the weekend :). 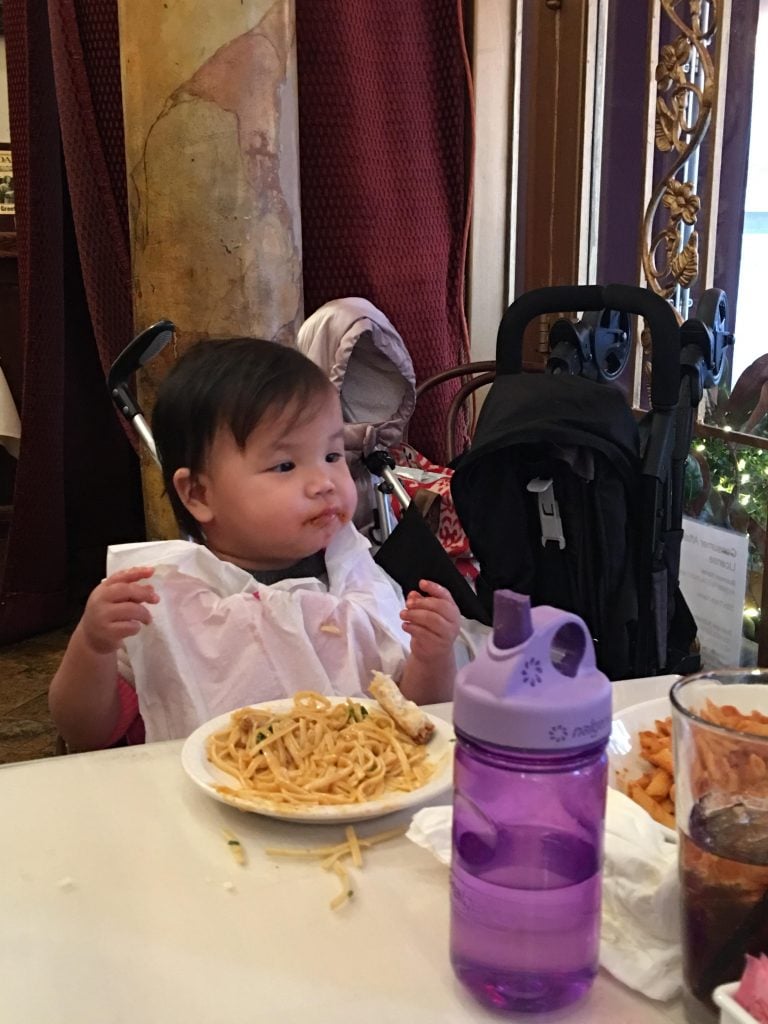 Madeley knows what she likes to eat.  Let’s all remember, four months ago, all she had ever had to eat/drink was formula…fast forward to today and she thinks she’s such a foodie with big opinions 🙂 .  Put raw veggies in front of her and she’ll shake her head “no” over and over again and wave you off with her hand.  Put some sort of pasta down along with a protein (eggs, ground beef, chicken, sausage) and she’ll eat it up.  The other night, I made chili and she had two bowls.  Put a grape down and she’ll throw it on the ground.  She wants pasta, rice, and meat.  She does not want a banana, avocado, carrot, berry, etc.  She also doesn’t like any sort of cracker/chip either.  She doesn’t want you to give her an animal cracker for a snack…she wants a pig in a blanket.  She really likes what she likes and will let you know if she doesn’t approve of something else. 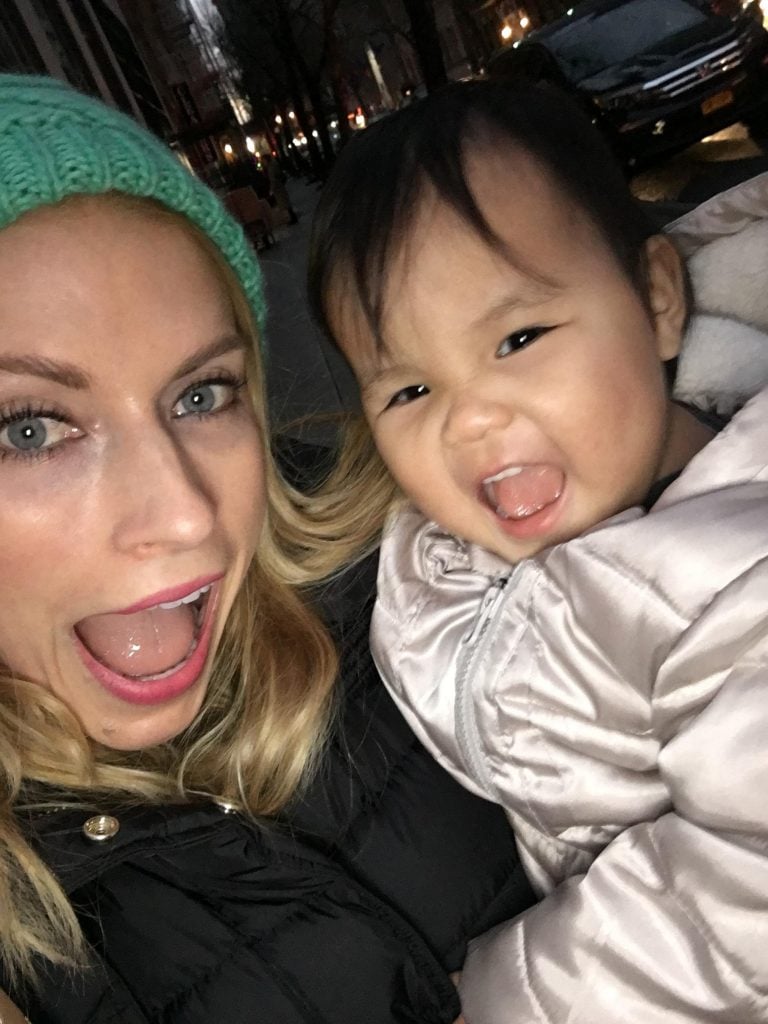 All of my girls are pretty girly…but this one might be the most.  She hangs around the bathroom in the morning and bums product off of me.  If I’m putting Moroccanoil in my hair, she wants a little on her hands too and then she’ll rub it in her hair.  If I’m putting lotion on my legs, she wants lotion for her legs.  If I’m wearing lip gloss, she wants lip gloss.  She knows when I’m in there getting ready and she’ll bring a toy in the bathroom and sit by me waiting for her products 🙂 .  I also find her in my closet trying on shoes at least twice a day.  You don’t know how many times she’s walked past me in the house wearing my Toms or my Converse on her little feet.  She’s just dragging them around (because her feet are TINY!) the house.  She has recently discovered purses and almost always has one with her in the car filled with Barbie stuff and little toys she collects throughout the house. 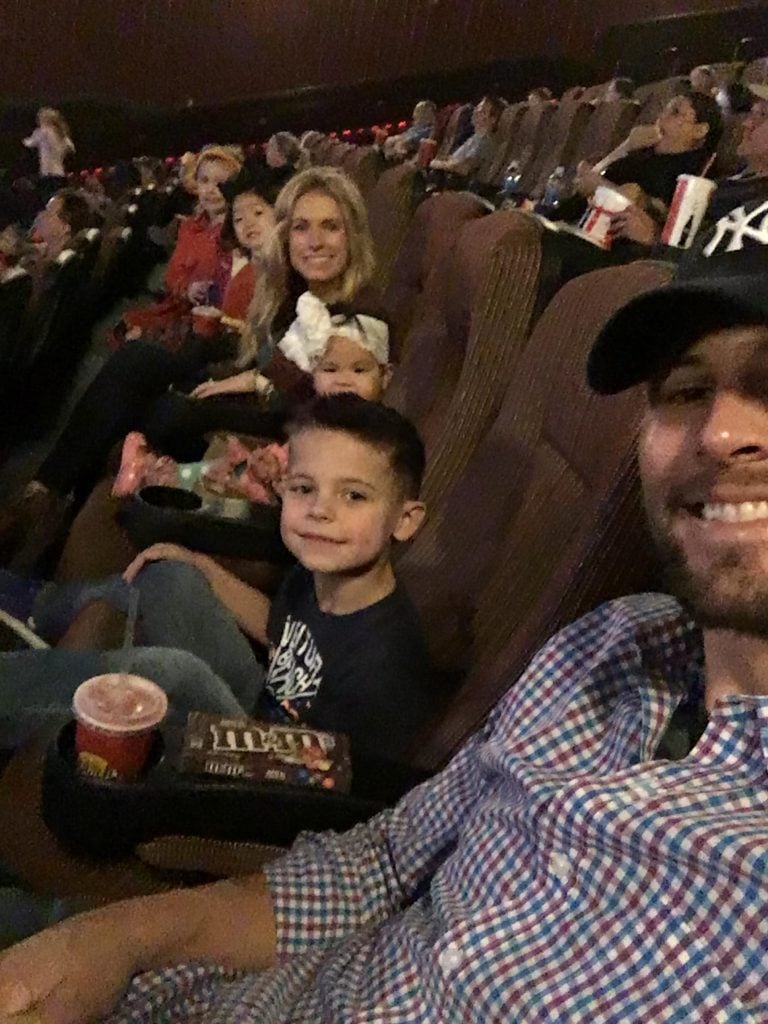 A few weeks ago, she sat through the Rockettes while we were in NYC and then a movie later at home and was entertained both times.  She loves music and loves to dance, so they both kept her attention.  Any time, she hears songs, she starts bobbing her head and moving her little arms. 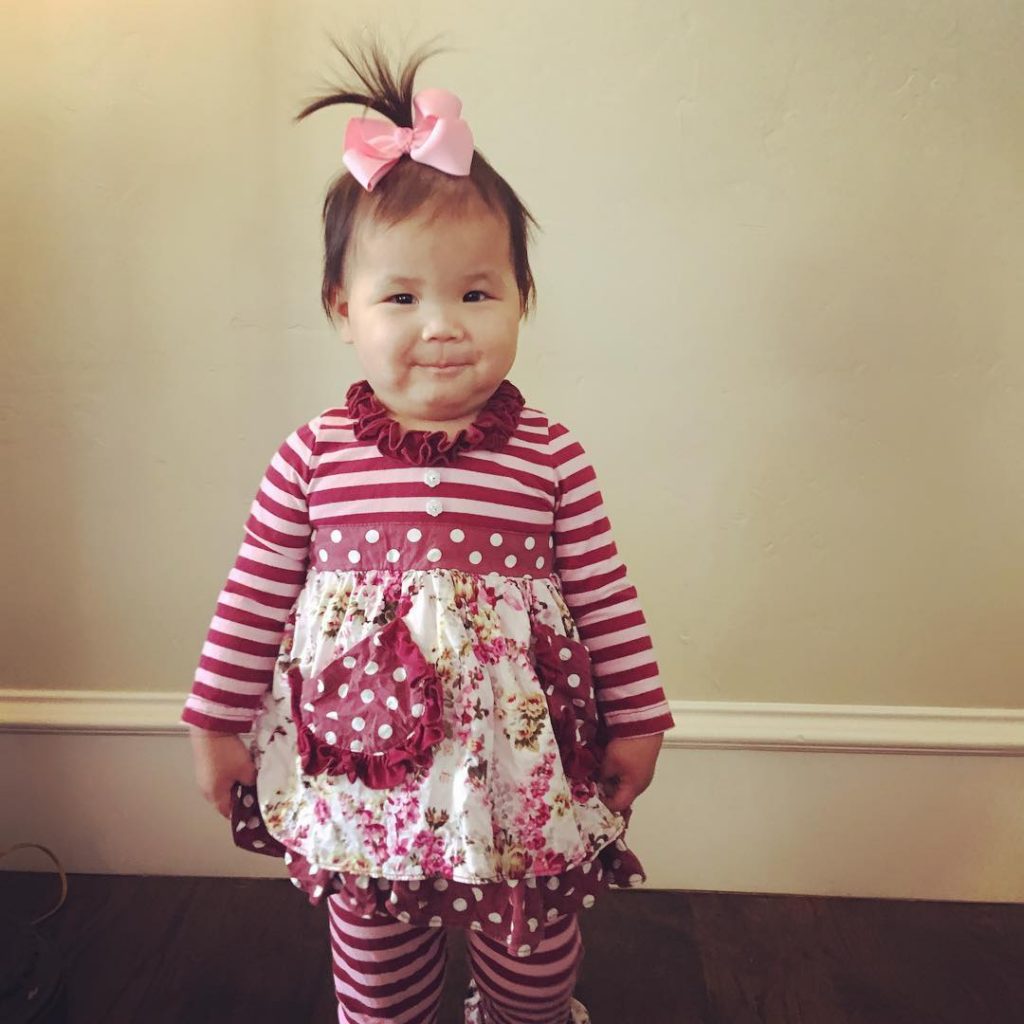 As you can tell, we’re enamored with our littlest love.  She has really adjusted to our family so well (and vice versa!).  All three big kids think she hung the moon and multiple times a day, I can hear them arguing over who gets to play with her (because they all want to play one on one with her ).  She just fit into our family seamlessly.  We have some things to work on…she’s far from being caught up to other kids her age…but, we take it one day at a time and know that eventually, that will all work itself out.  The bottom line is that we adore Miss Madeley and thank the Lord for her every single day.  Now…I’m off to wake her up.  She’ll be smiling from ear to ear…unless I delay with making her breakfast and then she’ll throw a huge fit 🙂 .  Adoption is amazing friends.  It’s a gift that is born from loss…and I appreciate it every day. It is such a blessing that we all get to be a forever family.

To see other posts on our adoptions, look below…