Today, we celebrate 8 months with this sweet girl… 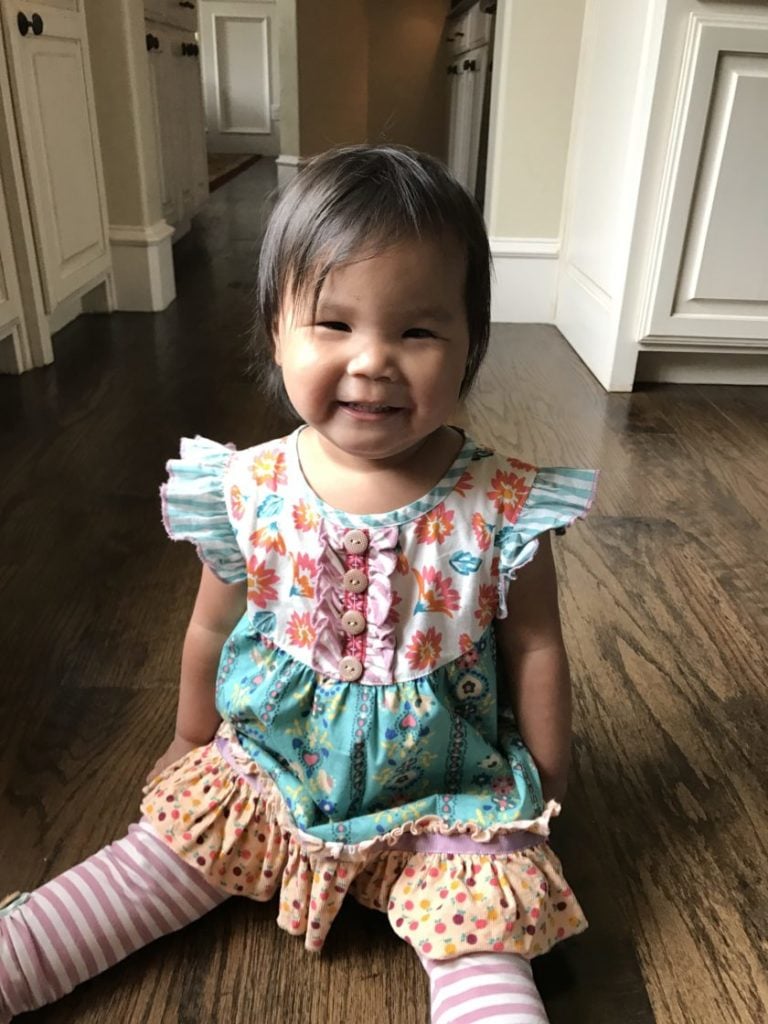 …and how blessed we are by it!

Before I begin, I must walk down memory lane just a bit.  The Slaughters arrived in China yesterday ready to adopt their precious little girl.  I know I’ve blogged this story many times before…but in light of what’s going on in their family right now, I feel it bears repeating.  We met the Slaughters briefly at church about 10 years ago.  The very first thing Erika ever said to me was where did I buy my blonde bobby pins that were in my hair that day.  Ha!  I remember thinking that I liked a girl who paid attention to such details.  So, we met them and were acquaintances but not much more.  Well, as I walked the lonely road of infertility, one of my really good friends (who already had two children) suggested I hang out with Erika more because she was also struggling with fertility issues too.  So, I called her one day and was kind of like “so, we’re both trying to get pregnant and it’s not going well, let’s talk about that” and a friendship was born 🙂 . 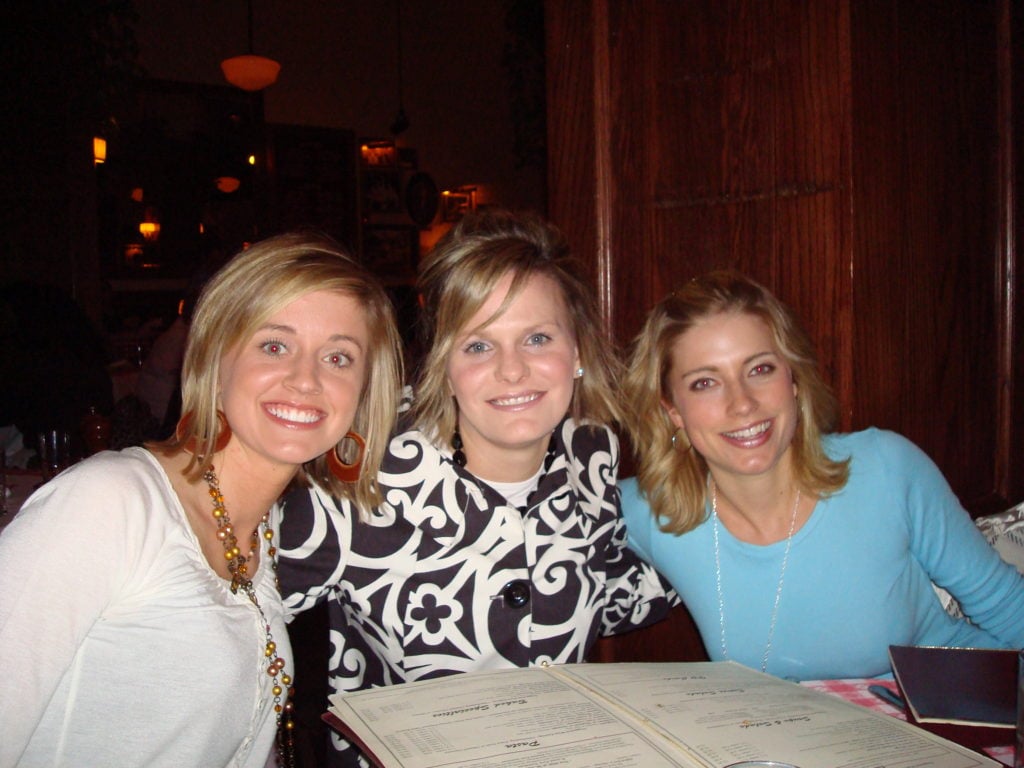 This picture was taken on January 16, 2008…the day I found out that I was pregnant with Kensington.  The first person I called was Whitney (the one who suggested Erika and I be friends) and then the second person I called was Erika.  I told them both and then later that night, we went out to dinner (pictured here) to celebrate Whitney’s husband’s birthday which was two days later on January 18…coincidentally, Smith’s birthday 😉 .

So, our friendship began over infertility but turned into so much more.  God used our unfortunate circumstances to bring us together.  Because let’s be honest…without infertility, we might never have pursued a close friendship?

Kensington was born on September 15, 2008 and a mere 18 months later, Erika and I each had two kids.  Two girls with fertility issues had four kids in 18 months… 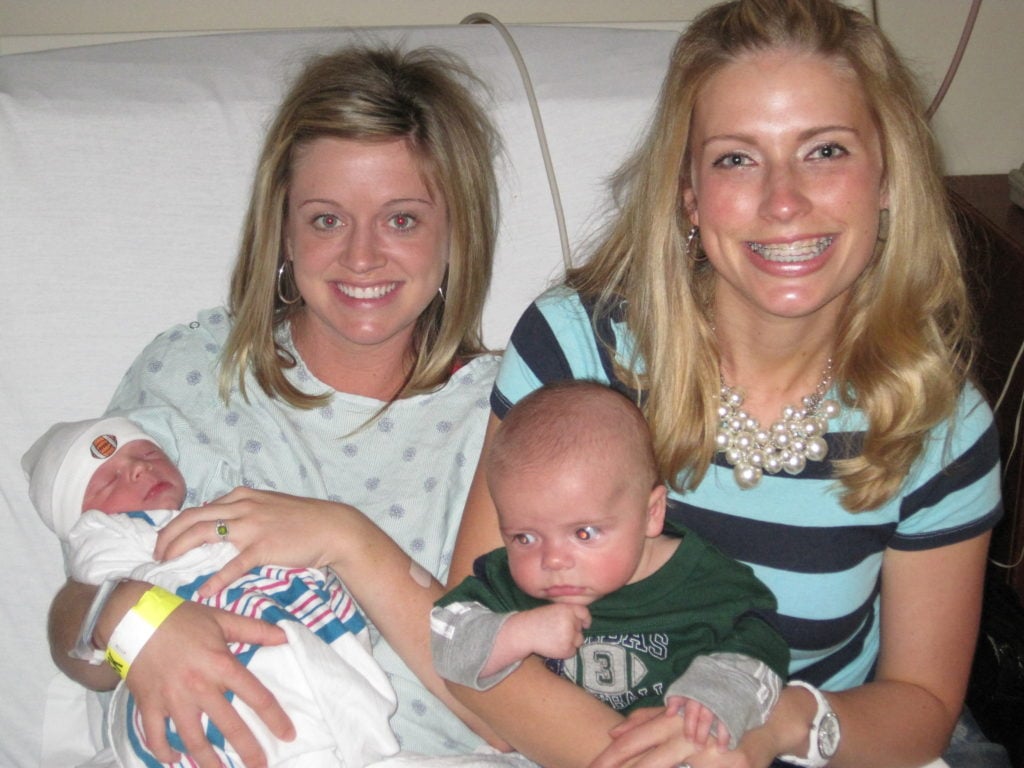 …we each had our surprise baby girls and then a year later we each had our SHOCKED OUT OF OUR MINDS baby boys.  This is us the day Nixon was born (Smith was 3 months old).

A few years later, we began the adoption process on June 30, 2013 and sweet Bowen came along in November of that same year.  And then about a year and a half ago, we were in the middle of this adoption right here for sweet Madeley James and one morning, I picked up Erika early so we could head somewhere and for some weird reason, I just said in the car as I was driving down the road “have you guys ever considered adoption?” and she BURST into tears.  Right there in my passenger seat.  She began to tell me that her and Tab had been praying about it for some time and that JUST THE NIGHT BEFORE had decided that God had indeed called them to adopt and they were ready to act on it. HOLY COW.  I was not expecting any of that.  The Lord prompted me to ask just hours after they committed to Him to adopt.

So, the rest is Erika’s story and I cannot wait for you all to hear it.  But for now, I just think it seems right to mention how in the middle of precious Madeley’s adoption process and then as the first 8 months of her being home has unfolded, God has been working in big ways in the Slaughter family.

The darkest time in my life was when I was trying to get pregnant.  I was depressed, lonely, sad, angry, hurt, miserable and really just in a fog for two years.  But now, almost 9 years later, I see two huge blessings from it: 1. I get to share my story with you and hopefully encourage some of you walking that road right now.  And 2. I became friends with Erika.  God took two girls who didn’t know each other and mapped out all of these things that would intertwine our lives forever.  Even when you don’t understand at all what He’s doing…it’s amazing to look back and see how it all unfolded.

So, eight months in, let’s take a peek at Miss Madeley James… 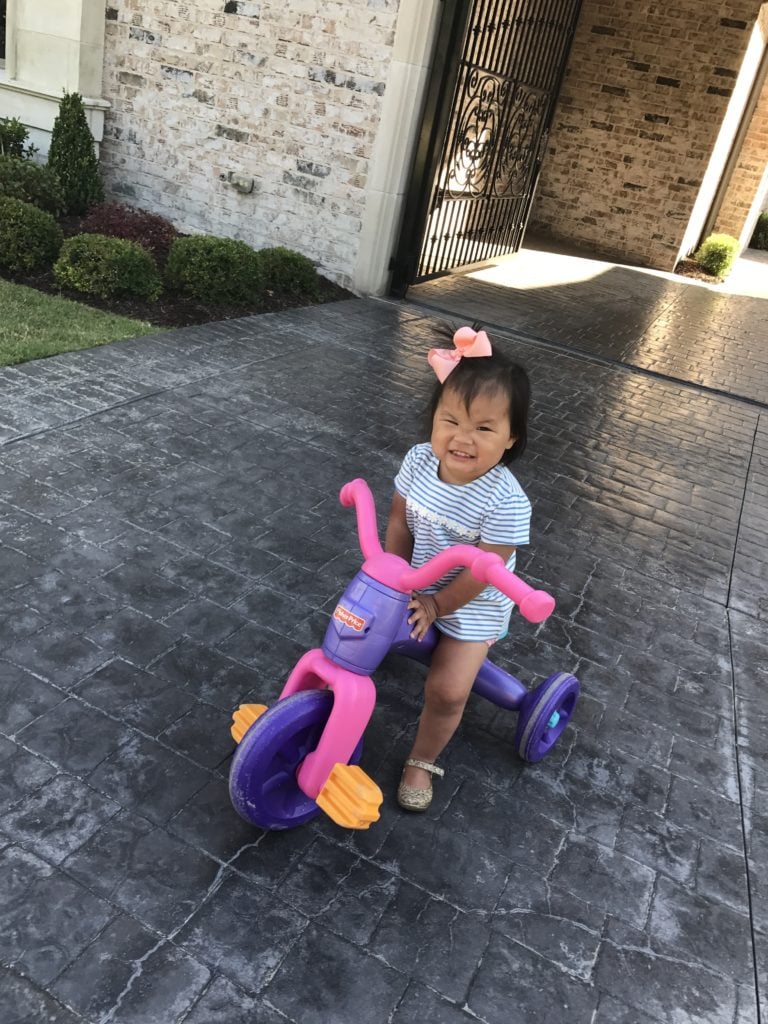 She ADORES being outside!  She wants to ride her bike, swim, play on the playground, go for walks, blow bubbles…she loves being outdoors.  This month, we’ve mastered the words tree, flower, and sky.  Her language is really blossoming and more and more, she is just picking up words on her own.  She can say things like “no, ashby.  my bike” without any problems now 😉 . 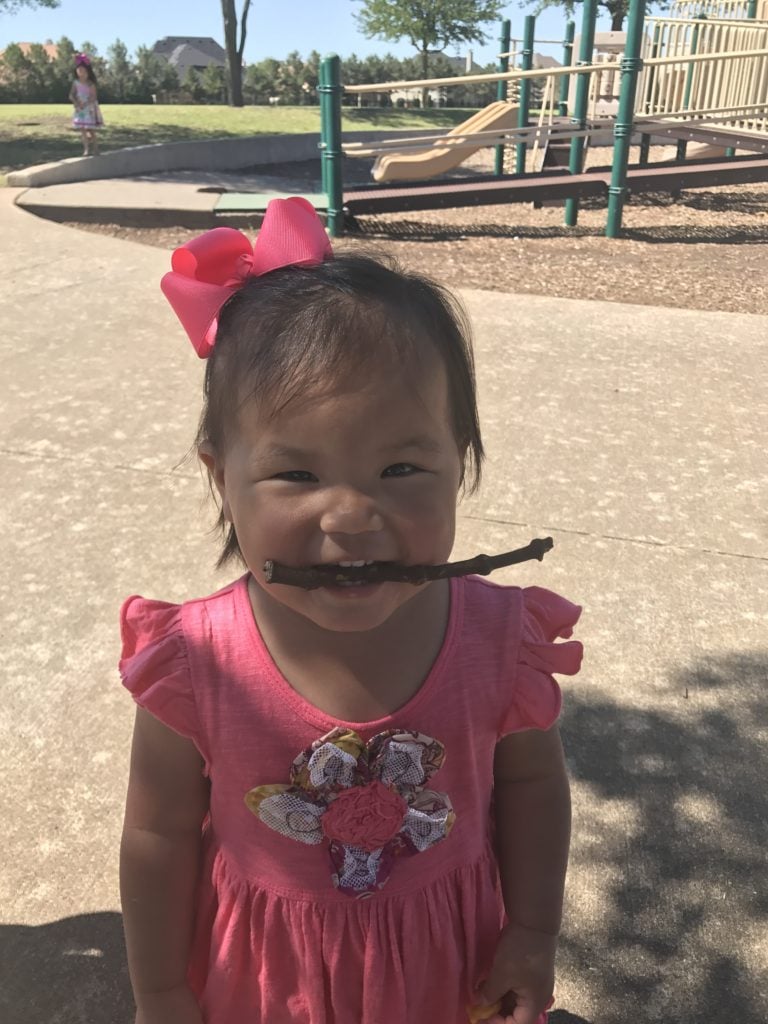 Madeley is FUNNY!  Like seriously funny.  She enjoys making us laugh and seeks out opportunities to do so.  She’s quick on her feet in the funny department. 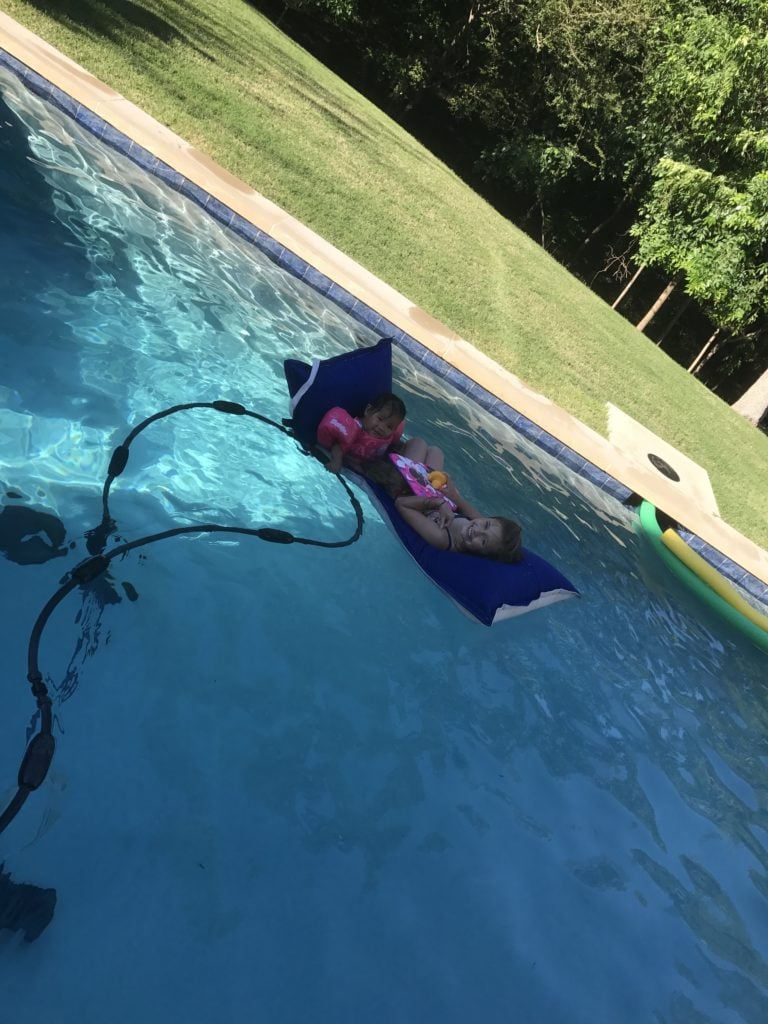 We started swim lessons this week and on the first day, she impressed us all!  So far, out of my four babies, she is the first not to cry on the first day.  Let’s be honest…sweet Kensington cried every day for like three years 😉 .  She jumped in, she swam to the teacher, she grabbed for the wall…she was a natural!  Whew!  You never know how that it is going to go! 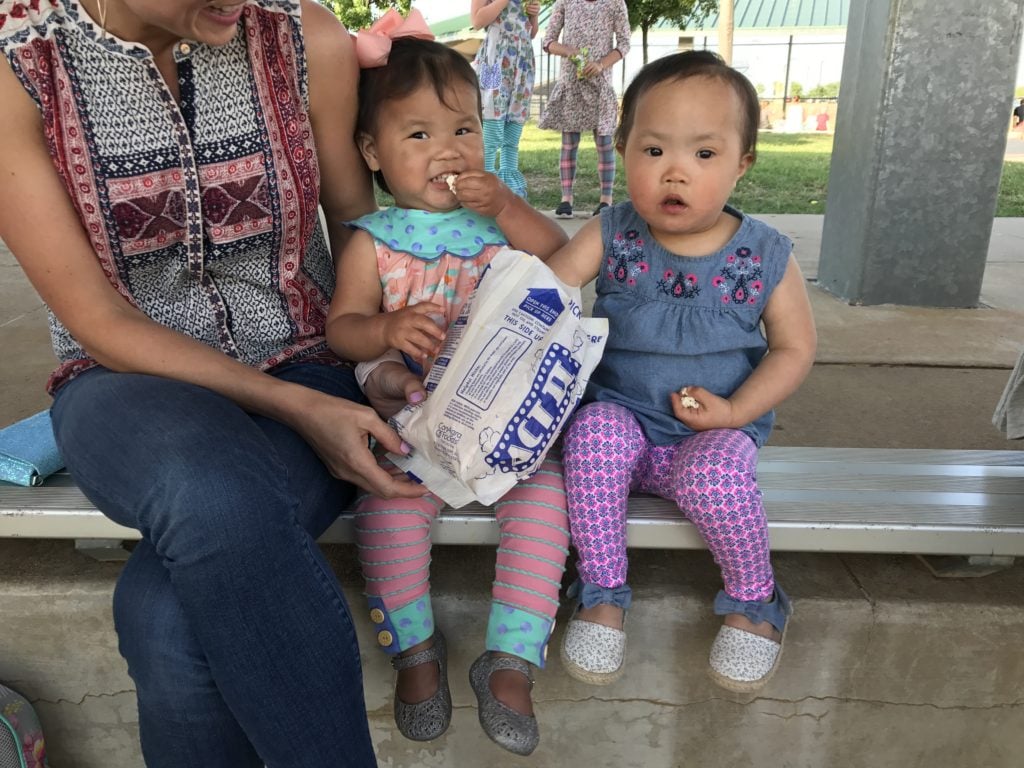 Madeley is making her own little friends right now too.  She’s already become fast friends with Willow and was already friends with Willow’s two year old sister Libby.  Plus, she has a friend at church named Abigail that she loves too.  When she sees these girls, she gets so excited, says their names and actually plays with them.  She is going to start preschool in the fall, and I’m excited for her because I can tell she really enjoys being around other kiddos. 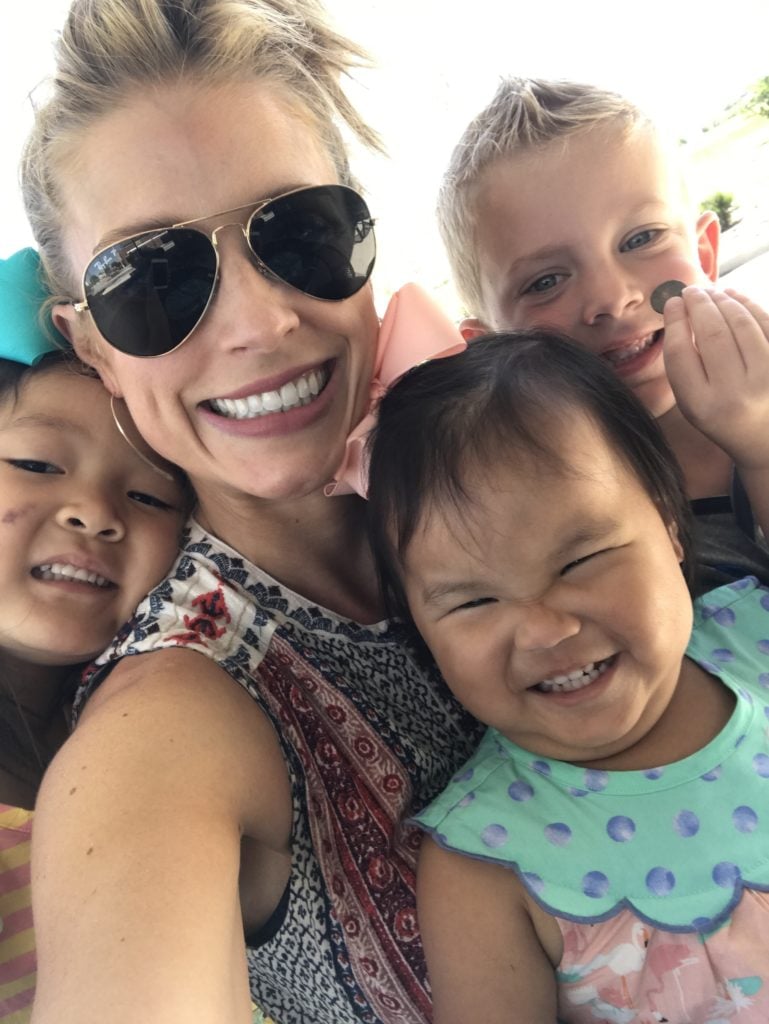 Madeley has attempted to eat some fruit this month…and proceeded to spit it out every time.  She likes fruit flavored yogurt and such…but not actual fruit.  She is still a protein girl.  Give her all the eggs, all the chicken, beef and pork…she wants the meat!  This month,  she did start eating baby carrots, so I’m considering that a win and she loves avocado and sweet potatoes too. 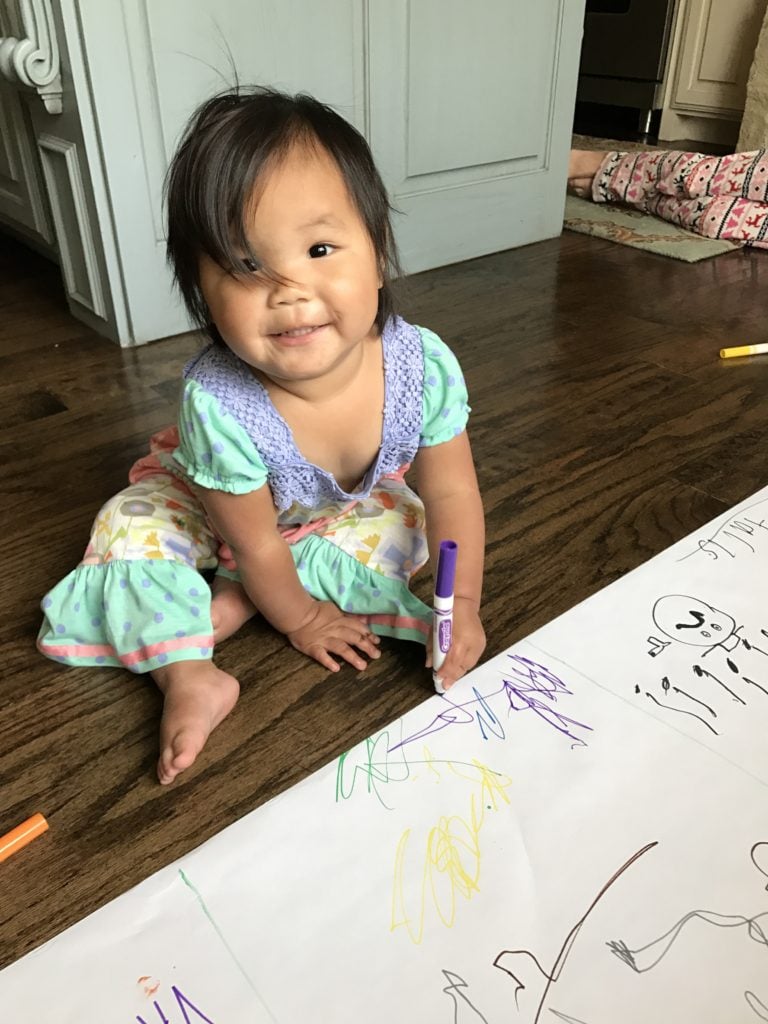 Madeley has picked up coloring, and it’s a great daily activity.  We think we might have a lefty on our hands here, which I would LOVE because Ashby is going to be a lefty.  Ashby’s dominate hand is unfortunately her right hand and since it’s affected with a vascular malformation, she has had to become left handed, so I would love it if Madeley were too so that Ashby isn’t the odd man out.  She uses her left hand to color and hold her fork/spoon…so, maybe she is left handed? 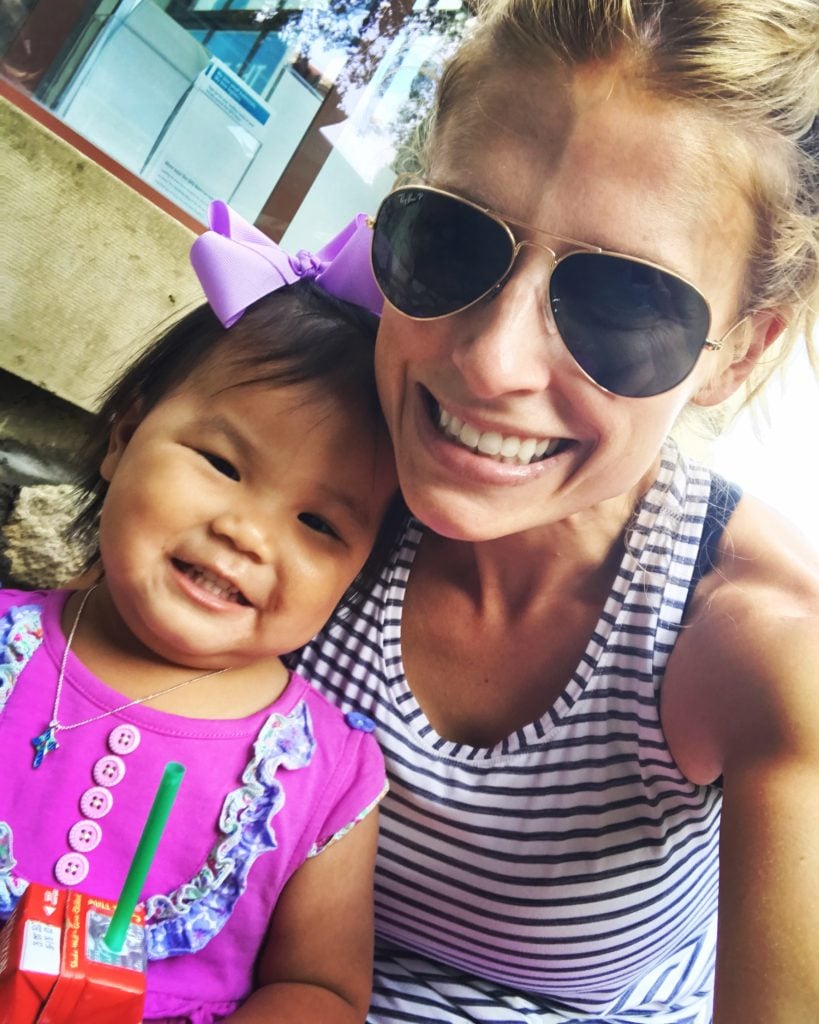 I am soaking up as many Madeley minutes as I can get between now and the end of school.  I LOVE it when my kids are home during the summer, but that means less one on one time with the littles, so right now, I’m eating it up.  She is so much fun to be with during the day! 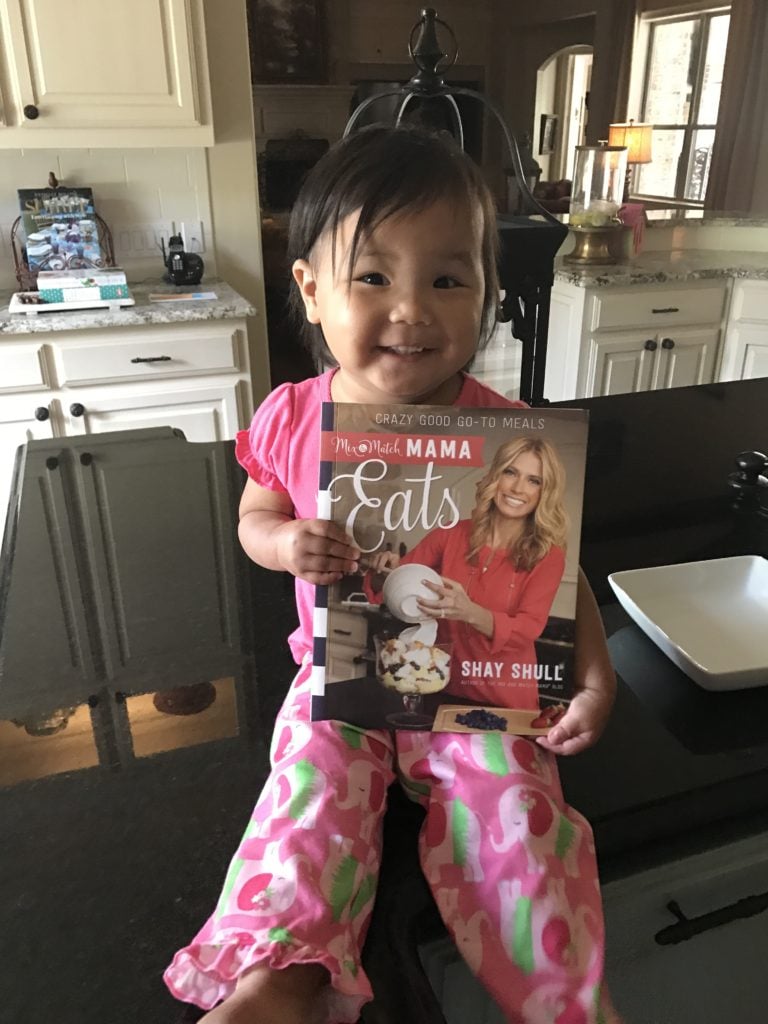 That’s a little look at our Madeley James.

Smith and I were talking about the Slaughters adoption the other day and he said “they just don’t know how awesome it’s going to be”.  Wow.  Isn’t that right?  It’s not always easy (parenting is not always easy!), but it is AMAZING.

Have a happy Thursday! On the first day of Christmas…